Grimshaw – a Family that Settled on Wolfe Island, Ontario

Two Grimshaw families settled on Wolfe Island, Ontario, which is located near Kingston at the head of the St. Lawrence River at Lake Ontario. The first Grimshaws to settle on the island were apparently William and Mary Ann (Blair) Grimshaw, who acquired several parcels of land in the western half of the island. William and MaryAnn were the progenitors of one of the most important Grimshaw lines in North America. The other Wolfe Island Grimshaw family line was that of George and Charlotte (Menard) Grimshaw, which is the topic of a companion webpage.

How the Town of Grimshaw, Alberta, Canada Got Its Name

Dedication of this webpage is to Barbara Bonner, for her excellent work in establishing the family tree and history for the William and Mary Ann (Blair) Grimshaw family line. Thanks go to Louis Richards for providing the materials on Anna (Lathrop) Grimshaw, wife of Thomas Grimshaw, and their eighth son, Coleman Grimshaw.

As noted, the descendants of William and Mary Ann (Blair) Grimshaw comprise one of the most important lines of Grimshaws in North America today. The descendants of William and Mary Ann family have been researched by Barbara Bonner4 and is shown in Figure 1. William is probably the son of Zephaniah and Jesusha (Hunter) Grimshaw and the grandson of William and Elizabeth (Lepninah or Zephaniah) Grimshaw; both families are the subjects of companion webpages. The grandfather William is probably the William Grimshaw who fought in Hazen’s Regiment on the Colonial side during the Revolutionary War.

The history of Wolfe Island has been summarized by Hogan and Smithson2 and by Waller3 (p. ii-vi). Waller also outlined the pedigrees of William and Mary Ann Blair Grimshaw (p. 96-98) and of George and Charlotte (Menard) Grimshaw (p. 99). The family of George and Charlotte did not remain on the island, and none of the family members is apparently buried there. A picture of the town of Marysville on Wolfe Island is shown in Figure 2.

Figure 2. Town of Marysville, principal community on Wolfe Island. Taken from the ferry that runs between Marysville and Kingston. Photo taken January 1999.

William and Mary Ann lived out their lives the island and are buried there. A photo of their grave is presented in Figure 3. Many of their children and other descendants are also buried on the island. The former “home place” of the William Grimshaws is shown in Figure 4, and the grave of Thomas Grimshaw (b. 1831), their oldest son is in Figure 5.

A map of Wolfe Island4 has been published, with land ownership indicated, including five parcels owned by this family (see Figure 5, at the bottom of this webpage). 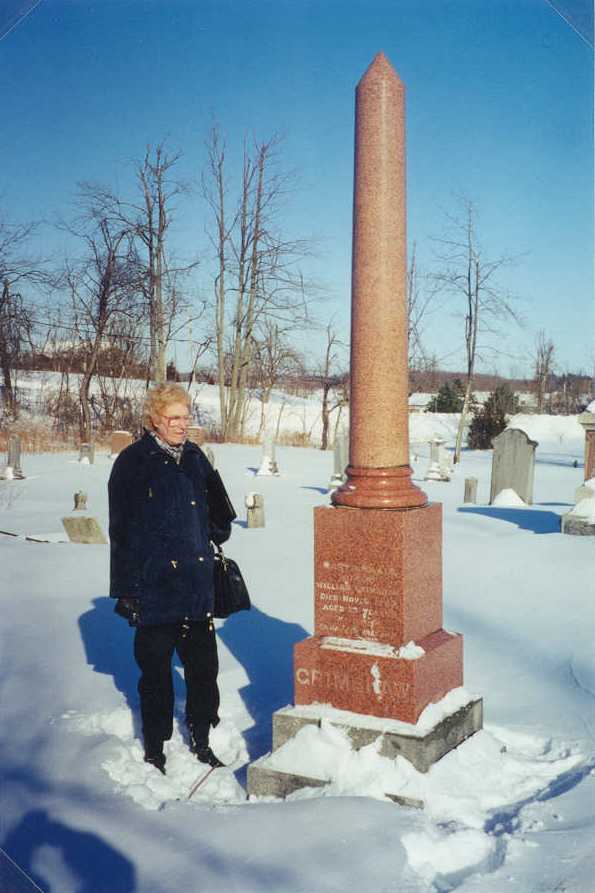 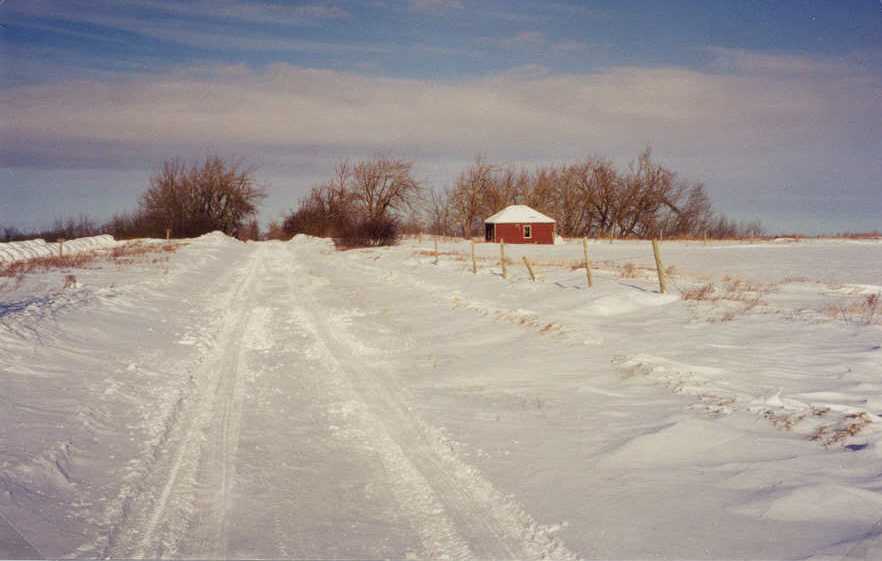 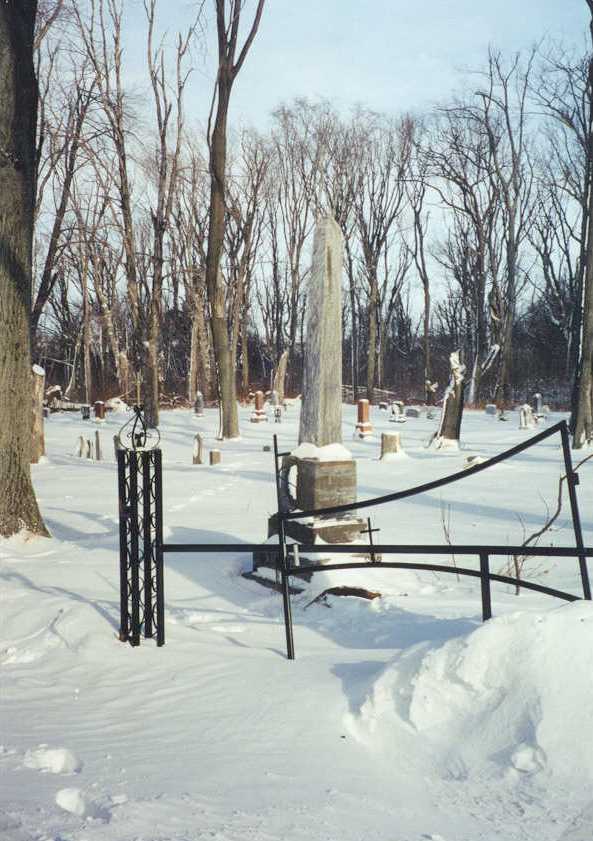 How the Town of Grimshaw, Alberta, Canada Got Its Name

The town of Grimshaw in Alberta was named for Matthew William Edward Grimshaw, one of the distinguished descendants of this family line. He was born in Kingston in 1880 to William W. and Maria (Wilson) Grimshaw (see descendant chart above). Matthew received his physician’s training in Kingston and subsequently migrated westward and established his practice, eventually settling in the Peace River area of Alberta. The town Grimshaw was named after him after his death in 1929. Additional information on Matthew and the town is given on another webpage.

Figure 5. Map of Wolfe Island, Ontario, Showing Locations of Land Owned by William and Mary Ann (Blair) Grimshaw and by George and Charlotte (Menard) Grimshaw. Map is in three parts, with overlap, from west to east. Land parcels of William Grimshaw are shown (circled) in the upper part of the western (first) segment. Parcels of his oldest son, Thomas, are in the lower part of the western segment. A parcel apparently owned by George and Charlotte is indicated in the eastern (third) segment. Map is from Illustrated Historical Atlas of the Counties of Frontenac, Lennox, and Addington4 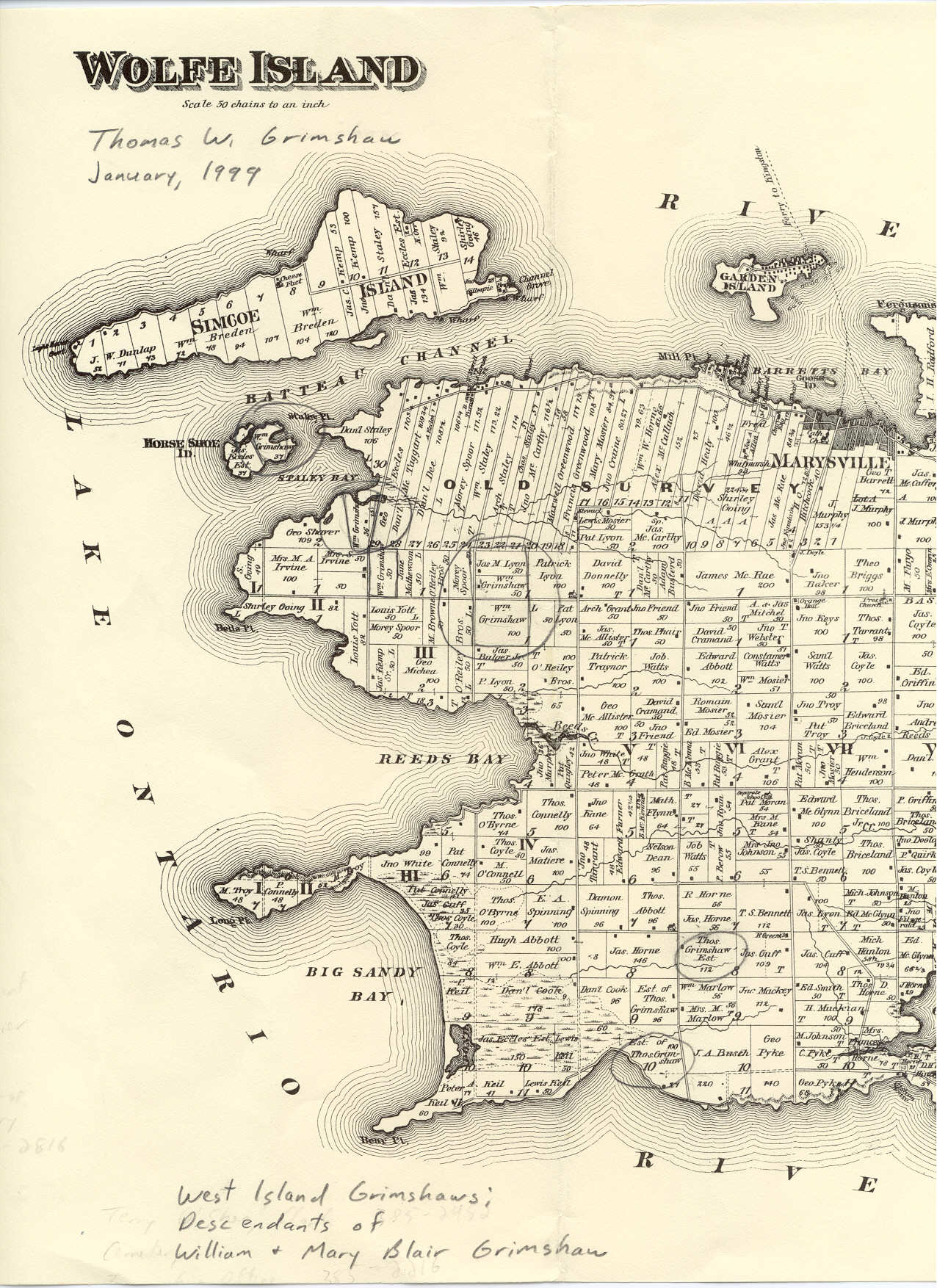 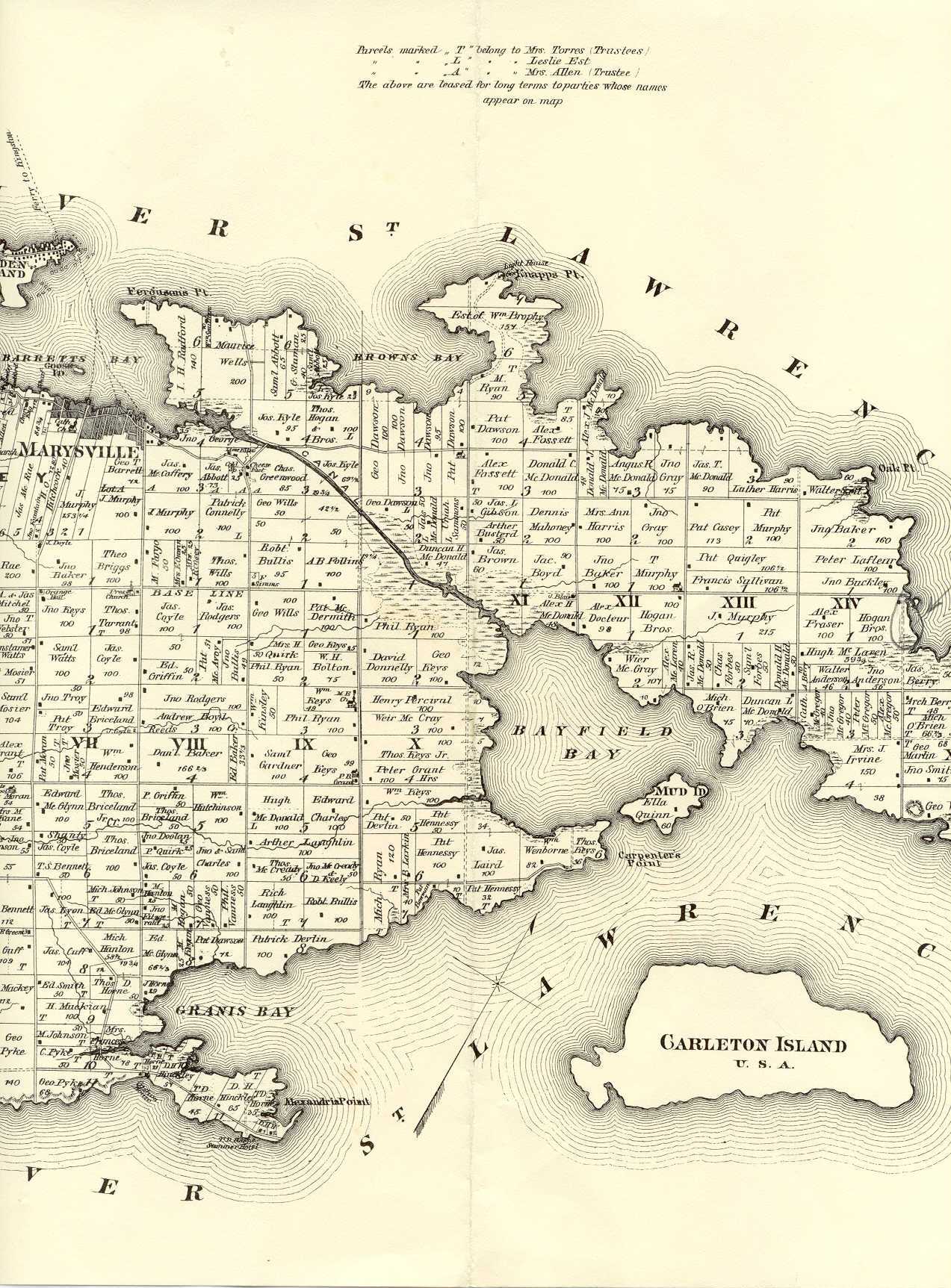 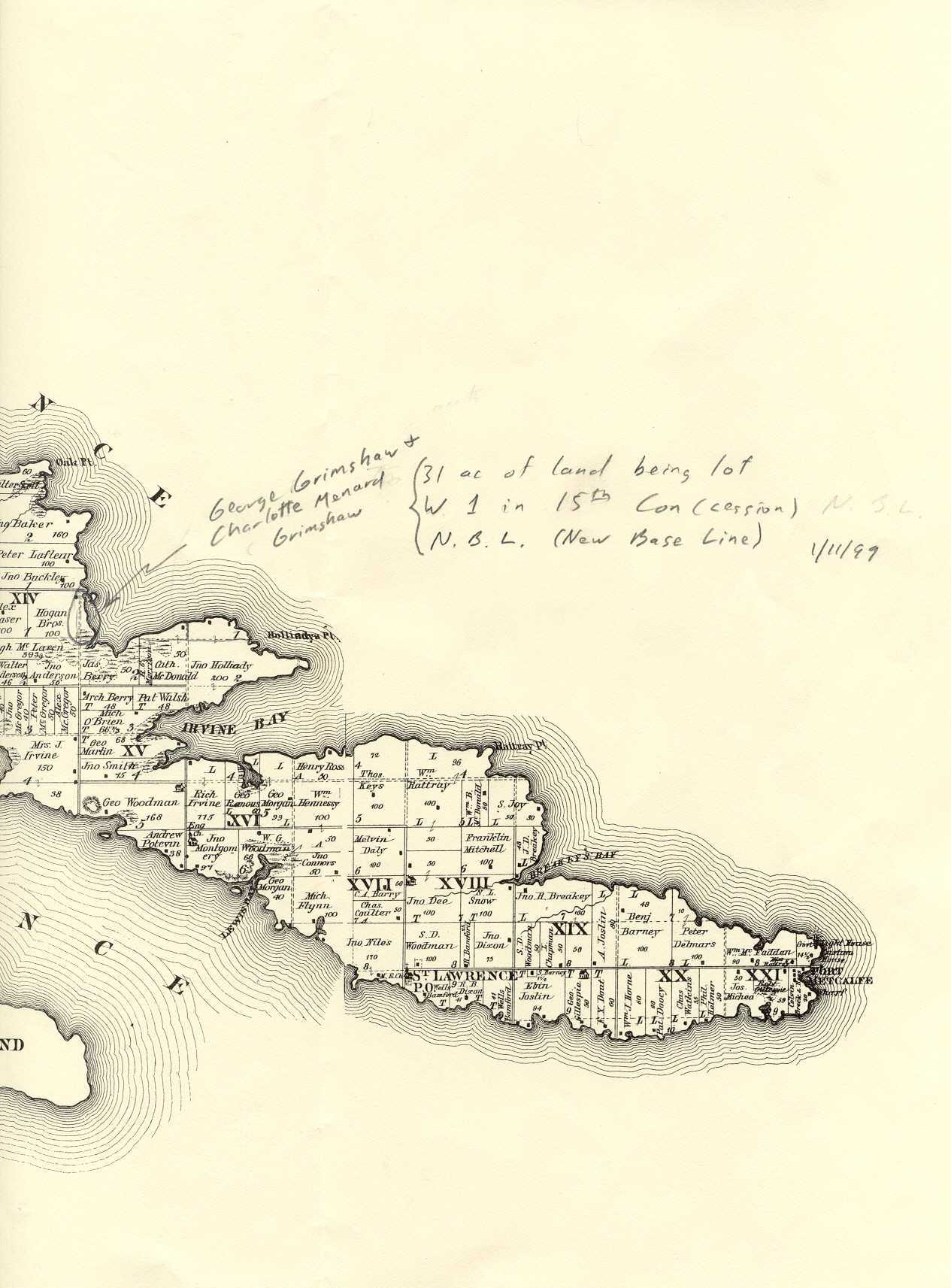 Figure 6. Anna (Lathrop) Grimshaw. Photo apparently taken in 1926, the year that she passed away.

Label on Back of Photo 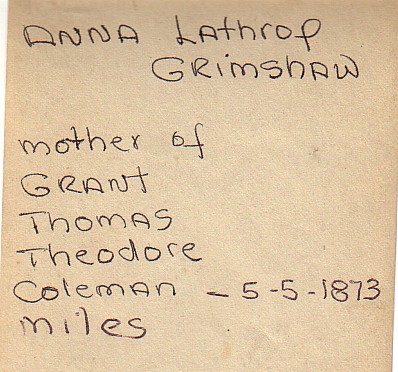 Nonagenarian Does Not Attribute Long Life to Any Routine.

Humanity would benefit greatly by strict enforcement of the prohibition laws in the opinion of Mrs. Anna Grimshaw, nonagenarian, of 211 Shonnard street.

Mrs. Grimshaw, who is in her ninety-first year, doesn’t believe it should be necessary for the government to en force the laws against intoxicating beverages. The people at large should respect and abide by them.

The country would be better without the alcoholic drinks, she contends.

A girl should not marry until she is 24 years old, Mrs. Grimshaw believes. That is a sensible age and the, girl when she reaches it knows her mind. It is folly for a girl to marry at the age of 17 or 18.

A man should be 52 years old. Both should be certain of a steady job ahead to support them – unless, of course, one or the other is immensely and in-dependently wealthy.

She reads her favorite paper, the Dally British Whig, published in Kingston, and The Syracuse Herald. The only use she has for glasses is while she is reading. Her conversation is as bright as that of “the present generation” and Mrs. Grlmshaw keeps posted on the civic and nationaI questions of the day. She does not attribute her unfailing good health, appetite, hearing and memory to any patent medicines nor special type of living, but believes in everyone doing his or her share of the world’s work.

“I recall that they used to have logging bees when all the neighbors would help clear the land and the cleared timber would be placed in huge piles and burned.

“My parents moved from near Montrose, Pa., to Wolf Island when I was 6 years old. It was all a wilderness there then. Father cleared enough timber to build a log house and we lived 1n that until I was 16 when we had masons from Cape Vincent build a stone house nearby. The head mason received $2 a day and his helpers $1.50. The stone was drawn from the lake nearby. We burnt our own lime at the shore and the sand came from our farm.

“There were plenty of wolves, ‘deer and other wild animals around our Wolf Island home when we first moved there, and I lived there 60 years. ‘Enough timber was cleared off to grow wheat, and I remember father used a three corner drag to drag it in. This was driven as close as possible to the stumps, and a grub hoe was used about the stumps.

“When it came threshing time father would build a threshing floor right out in the open and the grain which was cut with a cradle, by hand, was threshed with the old hand flail. Then a big hand fan wan used to clean out the chaff. This was made in EL shape to fit near the body so It was easier to use, but all that hand work was not easy by no means.

“The wheat had to be taken to Cap( Vincent to a steam mill, where it was ground for our flour. ‘What more we had than we could use was sold for 50 cents a bushel, and it was a three I mile row from Wolf Island to the main land, which was our market. Fifty cent: was a day’s wages in that time, and II was no easy matter to keep such a family as ours – five girls and one boy

“We had no sewing machines to do the work. We raised our own sheep; carded the wool by hand,, and spun the cloth. From flax grown on the place we wave our own linen.

“Our entertainments used to be in the form of dancing In the houses which had large enough floors. The parties would last until 12 or 1 o’clock, or until morning, and there was plenty of the good stuff in those days.

Opposes Use of Liquor.

As far as liquor is concerned I find I can get a long a lot better without it than with it. I think that in the case of serious illness some good bran is a help. I have used it in case of sickness, but not at any other.

(Article is cut off by limits of photocopier.)

Passing of a Nonagenarian

Mrs. Anna Grimshaw Dies at Home of Son In Rochester

On Sunday evening at about seven o’clock at the home of her son, Coleman Grimshaw, in Rochester, occurred the death of Mrs. Anna Grimshaw, at the advanced age of 95 years, following a brief illness.

Mrs. Grimshaw was born in Pennsylvania, October 2, 1831, a daughter of Hiram and Mary Lathrop. When she was five years old her parents came to Wolfe Island, opposite Cape Vincent, and settled upon land bordering on what is now known as Grimshaw’s Bay. At this time Wolfe Island was practically a wilderness, but Mr. and Mrs. Lathrop cleared a plot of land and began farming, in which vocation they were eminently successful. Anna Lathrop was married to Thomas Grimshaw on Wolfe Island and resided there until thirty-two years ago, when she came to Cape Vincent to live. In the neighborhood of fifteen years ago she began an making her home with her sons and daughters, remaining for a time with each of them.

Mrs. Grimshaw was a remarkably well preserved woman, when one considers her advanced age. She was hardly ever sick, and retained her faculties until the end. Her eyesight-was good, and she took great delight in sewing. Her work with the needle was equal to any turned out by persons half her age.

She is survived by six sons, Miles, of Portland, Oregon; Theodore and Coleman, of Rochester; Grant, of Maple View, and Robert and Thomas, of Cape Vincent, and two daughters, Mrs. George Pyke, of Kingston, Ont., and Mrs. Milton R. Schell, of Syracuse.

The funeral will be held from the home of her son, Robert Grimshaw, south-east of this village, on Thursday afternoon at one o’clock, the Rev. H. A. Friesen, pastor of the M. E. church, officiating. The body will be placed in the vault in the Wolfe Island cemetery.

Figure 7. Photo of Coleman Grimshaw from His Naturalization Paper (shown below) 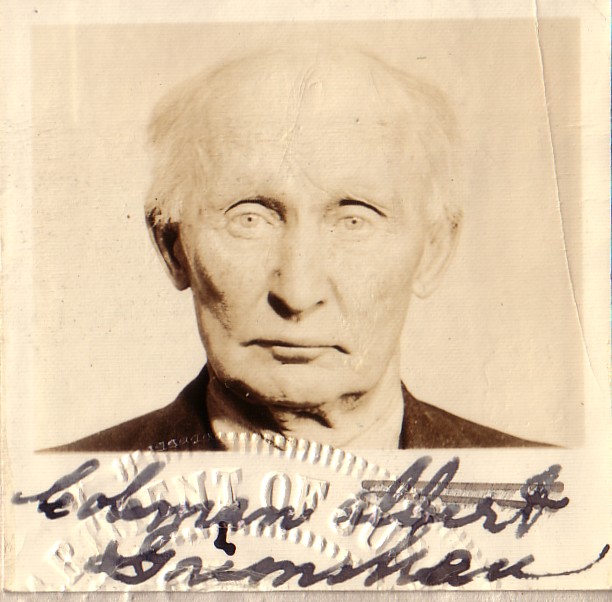 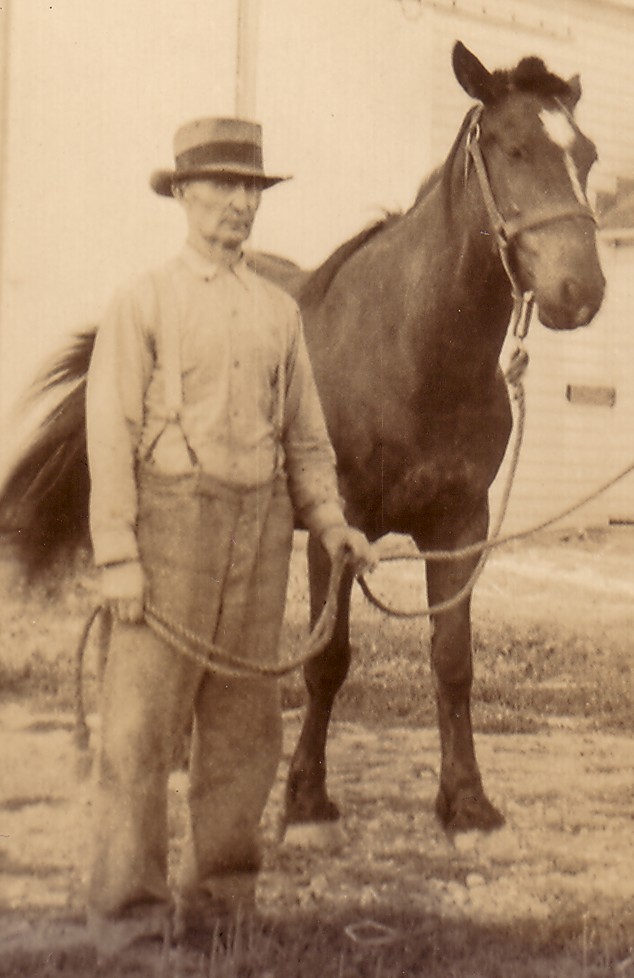 Label on Back of Photo 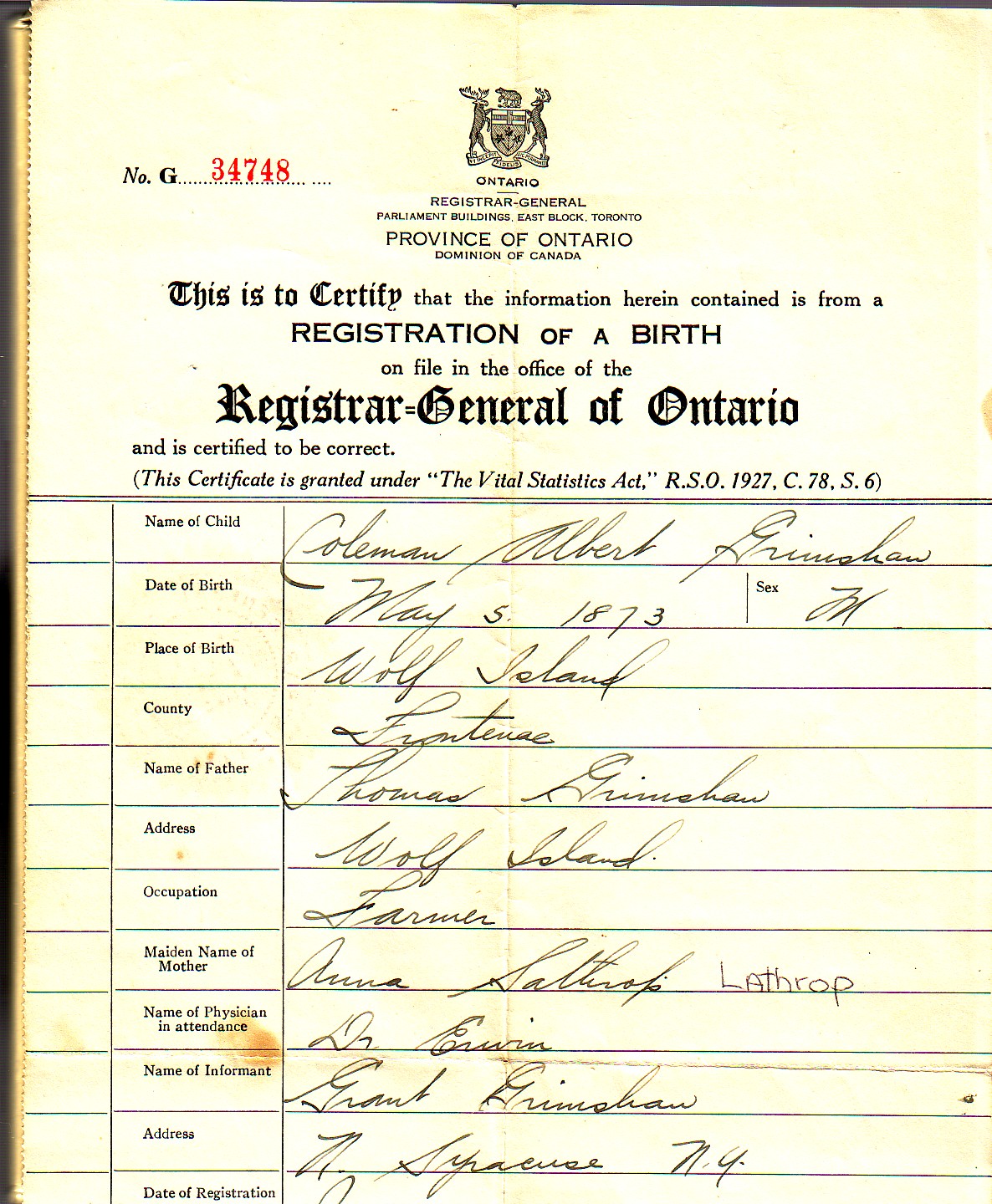 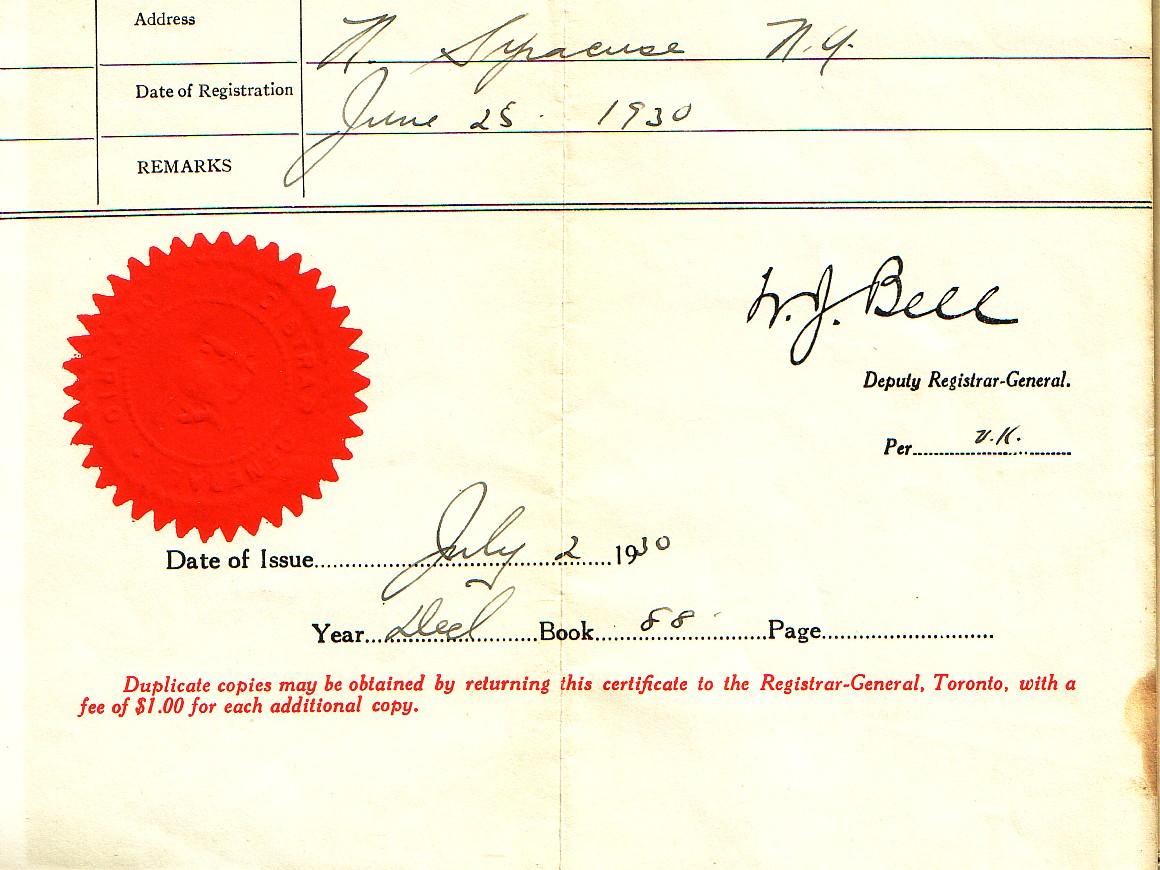 Figure 10. Coleman Grimshaw’s Naturalization Papers for U.S. Citizenship. Note that he was naturalized in 1894, at the age of 21, yet his photo appears much older. 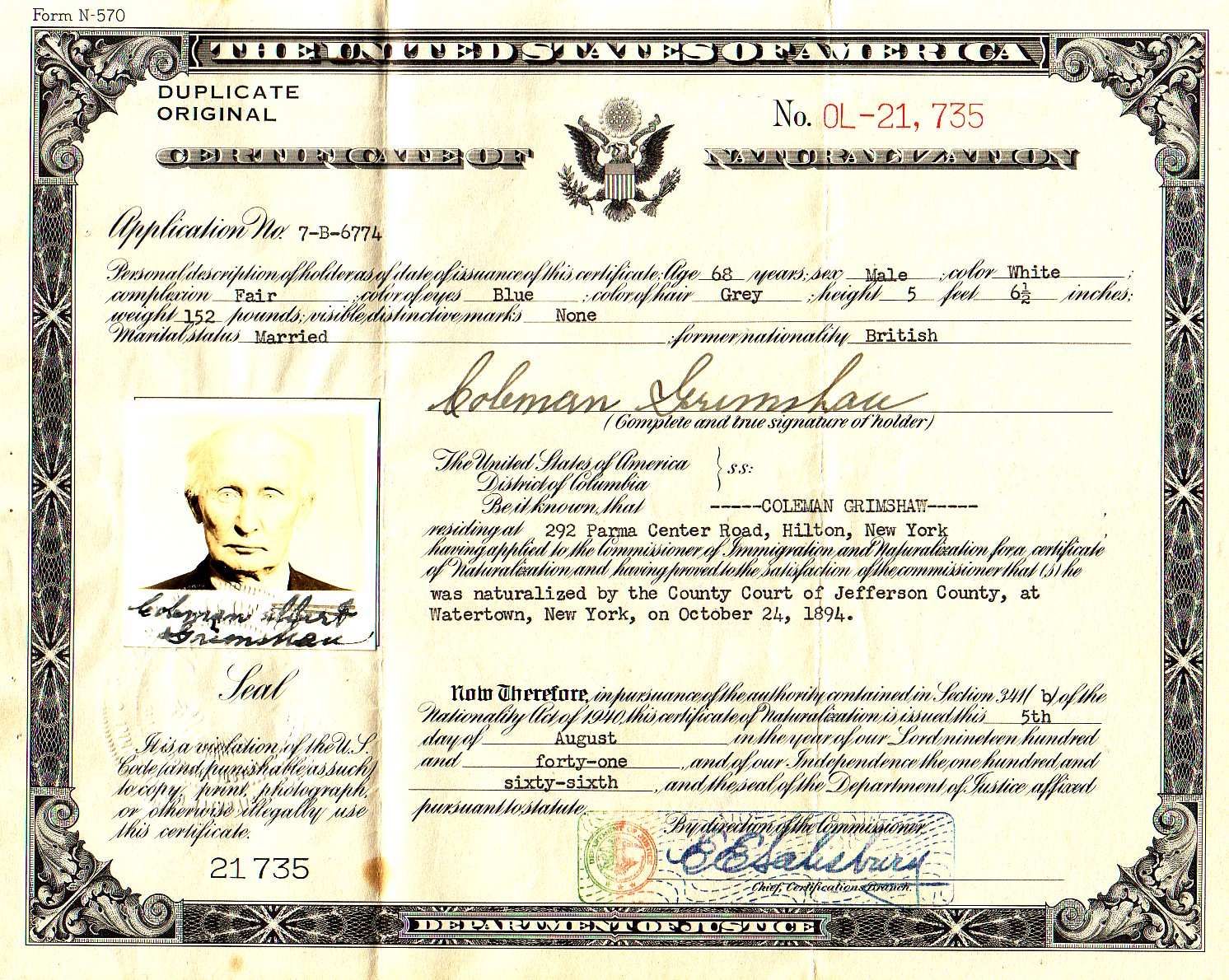 Website Description of Horne and Point Alexandria Cemeteries, Where Anna and Thomas Grimshaw are buried. A picture of Thomas Grimshaw’s headstone appears in Figure 4 above.

This cemetery is located on land which was set aside by a Mr. SPINNING. Across the road, on the edge of his property he also permitted the building of a school in which Presbyterian Church services and Sunday school were held until a church was built closer to the village. This land was later acquired by the HORNE family but the ownership was never transferred to the United Church. This is known as the Point Alexandria Cemetery.

This cemetery is well-kept cemetery

1The author expresses his appreciation to Barbara Bonner not only for providing this family tree information, but also for “educating” me on both of the Wolfe Island Grimshaw families.