and His Many Family Lines

Zephaniah Grimshaw was born in New Hampshire in about 1791 and was almost certainly the son of  William and Elizabeth(Zephaniah)Grimshaw, since that was the only Grimshaw family living in the area at the time. After marrying his first wife in New Hampshire, Zephaniah moved first to Vermont, then Mooers (Clinton County), New York and then Upper Canada (Quebec), where he lived most of his life in the area south of Montreal. A few years before his death, he moved back to Clinton County, New York. He died in Churubusco, New York, and is believed to be buried in that area, although his grave has not yet been found.

Zephaniah was no doubt one of the most prolific Grimshaws in history; he had about 22 children with three or four women, and he had around 102 grandchildren.

Summary Descendant Chart for Zephaniah and His Wives

Charles Wesley Grimshaw, Only Known Photo of a Child of Zephaniah Grimshaw

Zephaniah Grimshaw apparently had children with four or five women, some of whom he married. Barbara Bonner has compiled the most complete information available so far for Zephaniah’s family of origin, William and Elizabeth (Zephaniah) Grimshaw (see companion webpage). A portion of Barbara’s descendant is extracted below for Zephaniah Grimshaw and his four or five wives and his children and grandchildren.

The town records of Haverhill Town1 (p. 467, 469) include publishment of the intention of marriage (February 14, 1811) and the actual marriage (February 15, 1811) of Zephaniah Grimshaw and Jerusha Hunter. Images of the two records are shown below from a companion webpage.

John Nelson Grimshaw may actually have been the first child of Asenath Grimshaw with Zephaniah; she was his 3rd wife.

This wife apparently died of consumption before any children were born.

The picture of Ellen (Sheahan) Grimshaw’s gravesite in Quebec is shown below. It is from Calvin Lamb’s website. 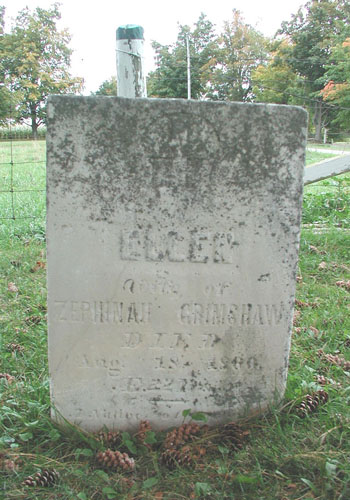 A detailed and interesting biography of Zephaniah Grimshaw is provided by Bill O’Halloran on his webpage as follows (paragraph breaks added):

Zephaniah is without a doubt my most interesting ancestor. Zephaniah was born in New Hampshire after the US Revolutionary War. He probably lived at home until his marriage in Haverhill, NH in 1811, even though he doesn’t appear in William’s household in the 1810 census.

After marrying Jerusha, he may have moved first to Vermont (where son William was born). According to Lamb & Frier Family Tree, Jerusha died & was buried in Vermont. In about 1815, he moved to Clinton Co., NY. While there he met Roxie. However, Hurd’s History of Clinton Co. says that Zephaniah “came from Rhode Island and located at an early day on lot 87” in the Town of Clinton! Supported by Bev’s search from the Clinton County GenForum – “John Nelson Grimshaw was born 1817, Clinton, Oneida, NY (probably in error, confusing the two Clintons in NY) to Zephaniah Grimshaw & Roxie”.

He was living in Mooers, Clinton County, NY by 1820, where he became romantically involved with his neightbour (& brother-in-law’s?) wife, Asenath. According to Eunice (Covey) Tucker, “Zephinire Junior Grisham came along and fell in love with Senith and chased Grandpa Hunter away.” He appears in the 1820 census with one son under 10 and two daughters under 10. By 1822, he and Sentha had moved to Huntingdon Co., PQ, where he lived for the next 45+ years. Zephaniah and Sentha proceeded to have eleven more children together over the next 20+ years, without benefit of clergy. Zephaniah and Sentha finally married in 1847. None of their children were baptized until after their marriage. Zephaniah and Sentha must then have separated or divorced, as she moved to Mont Forest, Ont. with Zeph Jr., Esther Mary and another daughter about 1855.

Before his marriage or domestic arrangement with Adeline Covey, Zeph may have married Ellen Sheahan. From old Roman Catholic Cemetery in Hinchinbrook – “Ellen, wife of Zephinah Grimshaw died Aug. 18, 1860,
age 22 years”. Zephaniah seemed to surround himself with women. In the 1861 census, Adeline Covey (single with a 3 year old child), along with another woman, Mary, lived in his house, as had the the recently departed “Ann” (Ellen?), who died of consumption at age 22. It’s interesting that his next child, with Adeline Covey, was born a mere seven months after Ellen’s untimely demise!

About 1868-70, Zeph and Adeline moved to the Township of Clinton, NY with their four children. Something must have happened to the family shortly thereafter, as some of the children were dispersed and living with other families by 1871. Zephaniah supposedly died in 1872 in Churubusco, Clinton County, NY (per Grimshawv14t1260.FTW). Unknown where he was buried. Searches of cemeteries and burial records to date have turned up nothing.

Bill O’Halloran has prepared more information on Zephaniah Grimshaw. A summary of the information is on his website may be found at:

Like Bill O’Halloran, Calvin Lamb has developed extensive information on Zephaniah Grimshaw. A brief biography is shown below.

Zephaniah & Jerusha were born in New Hampshire. After their marriage in 1811, they moved to Vermont by 1812. Jerusha died & was buried in Vermont.

He met a woman by the name of Roxie at Mooers, Clinton County about 1815 shortly after his arrival. However, soon after, there were wife problems again with Roxie & she left Zeph or she died and was buried at Moores. Around 1820 he became romantically involved with his neightbour & brother-inlaw’s wife, Asenath. He spirited Asenath (Noakes) away from her husband, James Hunter, when finally, he headed north to Canada in 1822 and settled in the Russeltown Corners area on the north edge of present day Havelock Township, Huntingdon County, Province of Quebec.

Tired of the low flat country of the Russeltown Area always flooding, Zeph moved again. This move was to his most lasting residence as he took possession of the east half of Lot 47 (47b) on the first concession of Hinchinbrooke Township, Huntingdon County, Quebec in time for the Canadian Census of 1825. Note that this farm was transferred to Franklin Township, Hinchinbrooke Region, when it was formed in 1857 from pieces of Hemmingford & Hinchinbrooke Townships along with part of Russeltown & Jamestown Regions of the Seigniory of Beauharnois. Presently the road past the property is known as Blackwood Road. From the CVHS Annual, 1982, “Sometime in the 1840’s, it appears that the Craiks built a gristmill on the Mitchell Brook, a little north of the road, on the present Henry Wilson farm, just over the Hinchinbrooke line. It was overhauled to an overshot mill in 1862, but seems to have faded from the scene shortly afterwards, being replaced by more convenient and superior grist mills.” That mill was just west of Zeph’s farm on the opposite or north side of the road. His nearest post office was at Frontier, NY, just one farm east of the south edge of his farm. This post office served both Canadians & Americans. Apparently, Frontier, NY had both a tannery & a brewery. The brewery, no doubt, motivated Zeph to grow a large crop of hops. Zephaniah and Asenath together had 11 children but were not married at that time. Finally, Zephaniah and Asenath experienced a religious union in 1847 as shown by the marriage certificate below although it appears James Hunter, Asenath’s first husband, was still alive.

Asenath became disillusioned with Zeph, possibly because of Mary, a woman, that was staying with them at the time. As a result, Asenath took Zephaniah Jr., Esther Mary & Harriet to Mount Forest, Egremont Township, Grey County, Ontario in 1855. Lonely Zeph met Ellen Sheahan but she died from consumption in 1860 at the tender age of 22 or 23. Adeline Covey was available at this same time and kept Zeph company while producing five children together. It appears that Zeph sold his farm in Hinchinbrooke Region, Franklin Township maybe upon hearing of Asenath’s death in 1863 & the closing of the grist mill up & across the road. He moved with Adeline & their children to Clinton Township, Clinton County, N. Y. His last property was located at the north-west corner of Clinton Mills Road & Bull Run Road. A school was located right across the road on the north-east corner, making it easy for the young children to get to school. Unfortunately, a year before his death in 1872, it appears that Zeph & Adeline ran into great difficulties. Some if not all of their children were placed with other families. This was family break-up big time with the children separated from both parents simultaneously. Ten years later, Adeline met an early death. She was not even 48 years old.

Were James Hunter and Jerusha Hunter brother & sister? What relation was Joseph Grimshaw to Zeph? Who was Roxie? When & did Zeph marry her? When did Zeph meet Ellen Sheahan and who was she? When did they marry? Who was Mary and what happened to her? It is unknown where or if Zephaniah & Adeline were married. Maybe they just lived common law. Where are the graves of Zeph, James, Jerusha, Roxie, & Adeline? If you had one child named Elizabeth, why would you name another child by the same name 8 years later, especially if the first Elizabeth was still alive? What is the story on Adeline’s first husband, Mr. Spearman? Is Ellen Sheahan & Ann the same person? The Hunter Family shown on the family chart is very speculative!
BIRTHS: At this time there is no official documentation to show where Zephaniah, Jerusha, Asenath, James, Mr. Spearman, Roxie, Mary, Ellen or Adeline were born.

Extracts from Calvin Lamb’s webpage may be found at the following location:

Shown below from Leah Nadine (Grimshaw) Driggs’ webpage is a photo of Charles Wesley Grimshaw. Photos of other children of Zephaniah Grimshaw have not been found for this webpage. 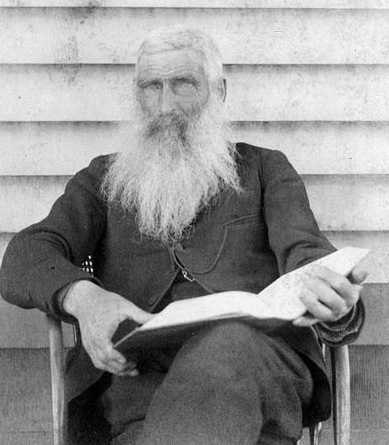