Viking Origins of the Grimshaw Surname

Viking Origins of the Grimshaw Surname

The Grimshaw name goes back to the time when surnames were beginning to be used in England. Surnames were derived from several sources, including geographic locations, means of livelihood, and spiritual or religious associations. Grimshaw appears to fall in the latter category in connection with descendants of Viking invaders of England.

An alternate hypothesis on the beginnings of the Grimshaw surname attributes the name to Celtic origins (earlier than the Viking origins set forth on this webpage) as described on a companionwebpage.

Viking Origin of the Grimshaw Surname

Viking Invasions of England, Including Lancashire

An Alternate Explanation of the Origin of the Grimshaw Surname

The history of England consists in large part of a succession of invasions of peoples from the European continent, especially the northern, Scandinavian areas. Among these invaders were the Vikings, whose descendants gave rise to the Grimshaw surname. The early Viking origin of Grimshaw in England is well documented by Rogers1:

Viking attitudes to the whole natural world seem to show a people, still close to nature, who combine superstitious veneration with a down-to-earth practical respect for the countryside. The special tree or grove often had some significance as a sacred place. Christianity sometimes stands accused of pessimism because of its emphasis on a happy life after death may lead its followers to accept present miseries; nevertheless, it seems raging optimism, when compared with the ancient Viking belief in prospect of the ultimate extinction of mankind, in a cataclysmic struggle of good versus evil: evil, in the form of a snake coiled round the world-tree, would prevail, and final darkness would prevail, and final darkness settle on all in a twilight of the gods.

It would be absurd to try to assess to what extent Vikings adhered to the letter of such beliefs, but they colour Viking place-names. Grimr, a recurrent personal name in place-names, had ambivalent overtones; sometimes it seems to have signified the god Odin, thought to go about disguised in a grim mask. At other times it seems to stand as a nickname for the devil. Possibly some forlorn unpromising site was dubbed devils settlement, or the place might have pagan associations. (Grimr) forms an element of 

Vikings were Norsemen who conducted raids on other countries. Odin was one of the chief gods of the Norse, as described by Encyclopedia Britannica Online2:

Odin also called Wodan, Woden, or Wotan, one of the principal gods in Norse mythology. His exact nature and role, however, are difficult to determine because of the complex picture of him given by the wealth of archaeological and literary sources. The Roman historian Tacitus stated that the Teutons worshiped Mercury; and because dies Mercurii (“Mercury’s day”) was identified with Wednesday (“Woden’s day”), there is little doubt that the god Woden (the earlier form of Odin) was meant. Though Woden was worshiped preeminently, there is not sufficient evidence of his cult to show whether it was practiced by all the Teutonic tribes or to enable conclusions to be drawn about the nature of the god. Later literary sources, however, indicate that at the end of the pre-Christian period Odin was the principal god in Scandinavia.

From earliest times Odin was a war god, and he appeared in heroic literature as the protector of heroes; fallen warriors joined him in Valhalla. The wolf and the raven were dedicated to him. His magical horse, Sleipnir, had eight legs, teeth inscribed with runes, and the ability to gallop through the air and over the sea. Odin was the great magician among the gods and was associated with runes. He was also the god of poets. In outward appearance he was a tall, old man, with flowing beard and only one eye (the other he gave in exchange for wisdom). He was usually depicted wearing a cloak and a wide-brimmed hat and carrying a spear.

An excellent map showing the routes by which the Vikings conducted their invasions of England, Ireland and Europe is presented in Savage3 (p. 85) and is reproduced in Figure 1 below. Lancashire was a principal target of invasion in both earlier and later raids.

Figure 1. Map showing the principal routes of Viking invasion of England and Europe. Note in particular the arrow that shows a primary invasion route past the Isle of Man and directly into Lancashire. 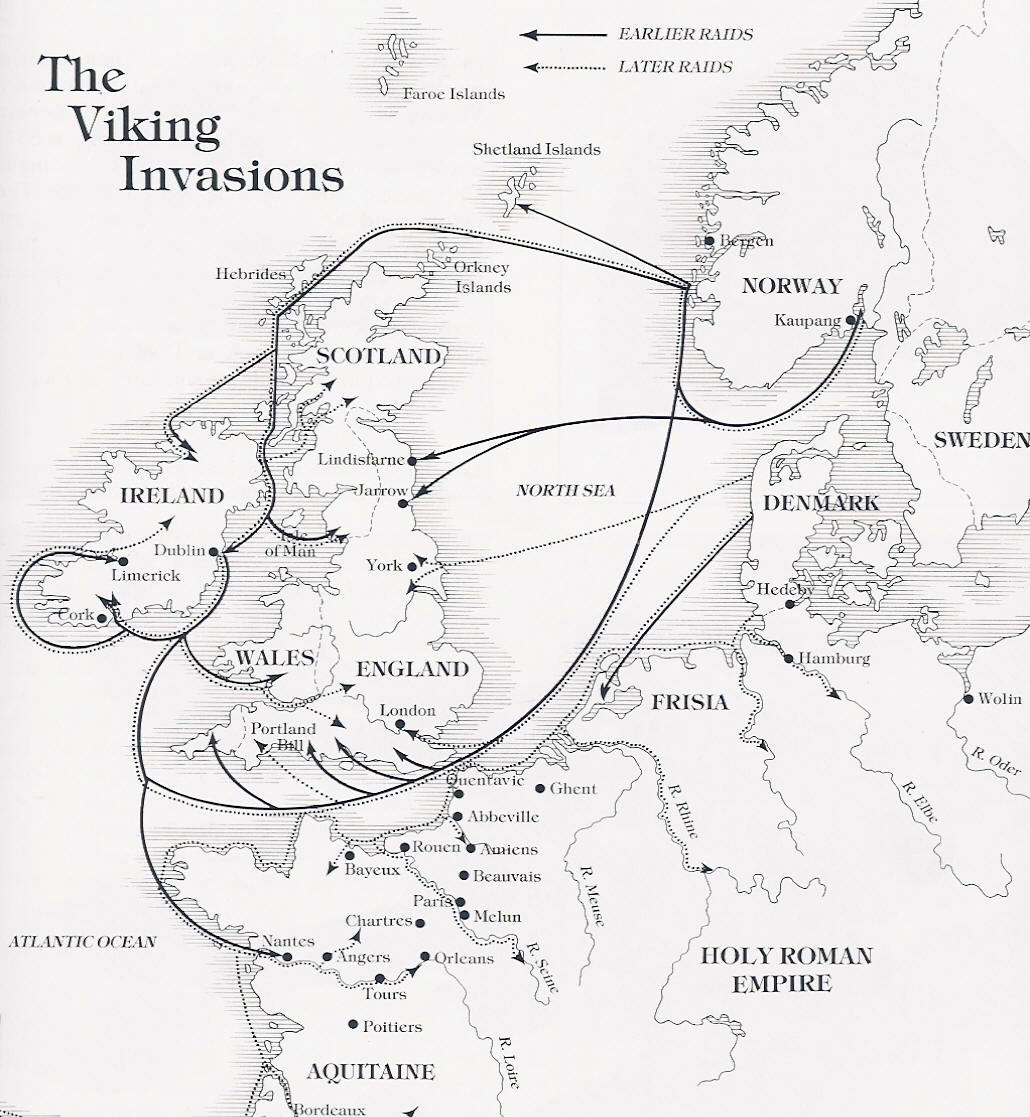 The Hall of Names4 provides additional information on the early origins of the Grimshaws:

History researchers have examined reproductions of such ancient manuscripts as the Domesday Book (1086), the Ragman Rolls (1291-1296), the Curia Regis Rolls, The Pipe Rolls, the Hearth Rolls, parish registers, baptismals, (and) tax records. They found the first record of the name Grimshaw in Lancashire where they were seated from very ancient times at Grimshaw, some say well before the Norman Conquest and the arrival of Duke William at Hastings in 1066 A.D.

this notable English family name, Grimshaw, emerged as an influential name in the county of Lancashire where the name was anciently found.. The Grimshaws were led to join King Richard in 1190 on his Crusade to Jerusalem and later, during the 14th century, the Grimshaws were amongst the English armies who fought back invasions from Scotland.

In summary, the Grimshaw name originated in England among the descendants of Vikings. The name extends back at least to 1190 and likely goes back before the Norman invasion of 1066, perhaps before 1000 A.D.

The Grimshaw surname may have a pre-Viking origin in a theory proposed by James McKay and as explained on a companionwebpage.