Eccleshill Township is underlain by coal-bearing strata of the Lancashire Coalfield, and coal has been mined in the township probably since not long after it was settled. Given their ancient holdings and economic interests in Eccleshill, it is not surprising that the Grimshaws were heavily involved in coal mining in the township.

Relating the early influence of coal mining on the history of the Blackburn region, Abram1 (p. 490) reports that:

Coal has been got in Over Darwen, Eccleshill, Tockholes, and Lower Darwen at least three centuries, very probably for a longer period, and the presence of this mineral fuel has during the interval compensated the inhabitants of these townships for the barrenness of most of the soil of the district. Traces of old abandoned pits and workings are found in many places upon the hill-sides.

Additional information on coal mining in Eccleshill and the surrounding area is provided in the description of the industrial heritage2 of the area:

The extraction of coal has a long history in the Darwen region, and there are documentary references to mining dating from the later medieval period. Eccleshill was one area in particular where small collieries operated over a lengthy period.

Much of this early activity was confined to outcropping where these seams were visible, or shallow mining by bell pits. Numerous small pits were sunk around the beginning of the nineteenth century. Even the lease of a small field of coal often lead to a number of shafts being sunk to work the seam.

Little now remains of these collieries, although even a cursory glance at the IMS O.S. Map reveals extensive activity in various parts of Darwen, and also indicates the technique of working from a group of shafts. To the west of the valley of the Darwen a combination of drifts and shafts was employed to work the coal seams of Darwen Moor.

By the early nineteenth century a number of proprietors were working the Darwen coal mines. These included Henry Sudell of Woodfold Park, the Blackburn merchant and cotton manufacturer, and the Brandwood family of Turncroft. In 1834 there were sixteen independent colliery owners in the town.

Although there were a large number of shafts, by comparison to the Accrington and Burnley coalfields, mining in Darwen was on a very small scale. Some evidence for this can be seen in an article in the Preston Guardian, of 19th March,1853, which reported eighteen pits in operation. Of these, six were worked by steam engines and twelve by horses and men. A workforce of 407 was recorded, of which 102 were employed by Eccles Shorrock in four collieries, and 64 at J.&J. Place’s Hoddlesden mines.

The Darwen coal seams were gradually worked out during the last half of the nineteenth century and by 1900 mining was almost totally confined to the east side of the town, mainly in the Waterside and Hoddlesden districts. A number of mines had been converted to flag pits, or were exploiting seams of fireclay and stoneware. The last of these collieries was abandoned in 1963.

In a description of the cotton industry-related history of Blackburn, Miller3 (p. 345-346) describes coal mining of the area around Darwen, including Eccleshill, and the Grimshaw connections to coal mining operations going back to the early 1600s (underline added by webpage author):

Without coal it would have been impossible for the engineering trade to establish itself so firmly in the borough. Hence it is not surprising to learn that the history of local coal mining goes back to Elizabethan times, and even to-day the precious mineral is being obtained from Coalpit Moor, near the southern border of the township.

Coalpit Moor is near the extremity of the rocky spur called Whinney Edge, which slopes rapidly down to the river Darwen at Ewood. All this area is dotted with the remains of old coal pits.

The cluster of coal pits on this moor, together with others in Livesey, Tockholes and Darwen, indicate the extent of this coal field. The Eccleshill coal pit was in full operation in the reign of Charles I., when it was owned by the Grimshaw family, of Okenhurst, Lower Darwen. The Eccleshill Brook was formerly called Grimshaw Brook, and Grimshaw Park still perpetuates the association. John Grimshaw was fined and had much of his property sequestrated for recusancy during the period of the Commonwealth. A petition of Nicholas Assheton, dated 21st January, 1650, shows (John’s) estate included lands in Clayton, Eccleshill, Burnley, Yatebank and Preston.

“in which sayd sequestered lands there are certaine collieries of good value which for want of repayrs are almost utterly lost, the sayd premises consisting much of coalmines and the same will require at least L500 to put them in good repayre and made useful for the Commonwealth”

During the following century there was a brisk trade in coal with the surrounding townships, and the improvement of road communications and the establishment of “gangs” of packhorse, outlying areas hitherto solely dependent upon turbaries and woodlands for their winter fuel were enabled to make fuller use of the precious mineral.

Clear evidence of coal mining that was underway during the mid-1800s is shown in the 1846 Ordnance Survey map of theEccleshill area. In the area south of Grimshaw near Brocklehead, several coal pits and a “Brocklehead Colliery” can be seen.

Coal mine openings can still be readily observed in the area around the Grimshaw location. An example is an opening in the streambed of Grimshaw (Waterside) Brook near Luddington. A photo of this old coal mine is included on the webpage describing the geology of the Blackburn regions.

The soil is poor and the situation bleak. The local coal measures extend underneath the land, and the Eccleshill coal mines have been worked at least three centuries. Extensive iron-smelting works have been erected recently in the township. A branch railway for mineral transit from Hoddlesden to the junction with the Lancashire and Yorkshire line from Bolton to Blackburn traverses the hill-side in Eccleshill.

The dismantled railway can be seen on current maps of the area, and the abutments for the Hoddleston branch of the railway bridge over Roman Road are still in existence; a photo is included in Figure 1 below.

Figure 1. Bridge abutments on Roman Road for former Hoddlesden Railway Branch. View is to the southwest. Manor House Farm can be seen up the road in the background. Photo taken April 1999. 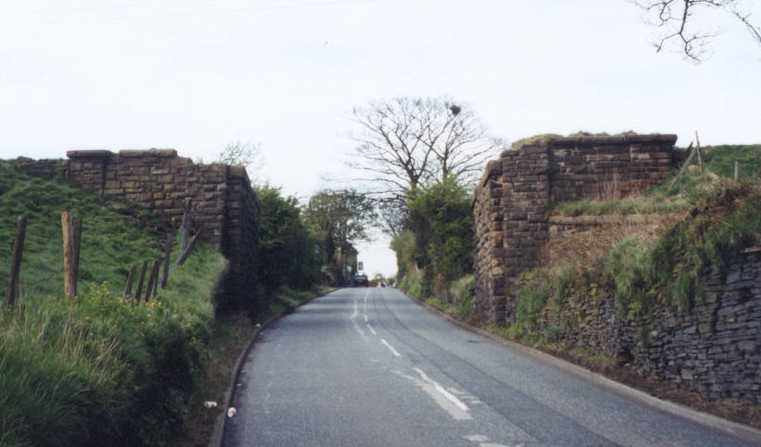 Additional detail on the history of the railway is given in the Industrial Heritage description for the area3:

The Hoddlesden branch of the Lancashire & Yorkshire Railway was authorized by an Act of 1872 and opened in 1876.

Although there were hopes that the single track would be used for passenger traffic, these were never realized, and the line was used for freight throughout its life.

The original line included a siding to Bulloughs Waterside Fire Clay Works, and in Hoddlesden itself a goods yard and a branch to the pipe works.

In 1908 a circular loop was constructed at Whitebirk Brick & Tile Works, and after 1950 traffic terminated at this point. The surviving section of line was finally abandoned in 1962.

Remains: the course of the railway can be traced as cuttings and embankments throughout much of its length. At Hoddlesden the site of the goods yard is now used as a garage.

3Miller, George C., 1951, Blackburn: the Evolution of a Cotton Town, a History of the Ancient Township of Blackburn in Lancashire, Written to Commemorate the Centenary of its Incorporation in 1851: Blackburn, The Blackburn Times, Chapter 3, p. 343-351.