Samuel Grimshaw immigrated to New Brunswick, most likely from the Leeds area in Yorkshire, in time to meet and marry Alice McFarlane in about 1838. Samuel, the son of Samuel and Mary (Shackleton) Grimshaw (see companion webpage), was descended from the Edward and Dorothy (Raner) line of Grimshaws, which is described on a companion webpage.

Samuel may have been influenced to immigrate to North America by his uncle John Grimshaw, who had immigrated to New York (and subsequently to Ohio) in the early 1800s (see companion webpage). His two brothers, Joseph and John Grimshaw similarly immigrated to North America and settled near their uncle John Grimshaw in Ohio. After Samuel and Alice were married in New Brunswick and had daughter Mary there, the family migrated to Ohio also. Samuel’s nephew, Samuel Grimshaw (son of Joseph), was awarded the Medal of Honor for service in the U.S. Civil War (see companion webpage).

New Brunswick records show that Samuel lived in English Settlement (now the communities of Pearsonville and Highfield) northwest of Sussex. After leaving that area, he apparently attended medical school and became a physician. He was recorded in the 1850 U.S. Census as a physician living in Jefferson County, Ohio, where his uncle John and two brothers had migrated to.

1850 U.S. Census Record for Samuel and Alice in Ohio

Maps of New Brunswick and of Sussex, Highland, and Pearsonville

Thanks go to Greg Haley for making this webpage possible by providing his research on Samuel and other early settlers in English Settlement New Brunswick.

This webpage was initiated on the basis of a kind e-mail from Greg Haley in June 2008, which is reproduced below.

I want to compliment you on your excellent Grimshaw website. It helped me with some recent research. I have been studying the pioneers of English Settlement New Brunswick (now the communities of Pearsonville and Highfield) and one of the early settlers was Samuel Grimshaw, who later became a physician and moved to live near his family in Ohio. I thought you might be interested in some additional information on this man, which I have collected in the course of my research. Attached is a history of the lot of land on which Samuel Grimshaw lived in the early 1840s. It consists of a series of biographical sketches of the various owners of that property and the associated land transactions. (QCRO in the text stands for Queens County Registry Office.)

Greg has written an excellent summary of Samuel Grimshaw’s presence in the English Settlement for a privately produced manuscript (citation below). The text of the summary is provided below the citation.

Samuel Grimshaw (1807-after 1883) was a resident of the community from the 1830s until 1848. He did business with merchant William Pearson between 1837 and 1841 and appears that he lived in the southern part of the settlement, where he married around 1838 to Alice, daughter of Alexander McFarlane. They had one child, a daughter Mary, born in 1840. Samuel Grimshaw was the schoolteacher for the northern part of English Settlement in 1841 and remained in that role for about eight years. The last record of him in the settlement dates to 1848, when he witnessed the will of Robert Sargeson. Grimshaw may have apprenticed to Dr. Beavan. He subsequently attended medical school, probably in the United States, and in 1850 he was a practicing physician located in the town of Green, Munroe County, Ohio1.

Samuel Grimshaw was born in Leeds, Yorkshire, England, on 18 September 1807, the son of Samuel Grimshaw Sr. and Mary Shackleton. According to the Grimshaw family history2, his uncle John Grimshaw (1766-1836) left England for New York in 1803, and was a prosperous woolen manufacturer in Dutchess County in 1810 and 1812. He later joined the push westward over the Appalachians and settled in Jefferson, Ohio, where he was enumerated in the censuses taken in 1820 and 1830. Samuels brothers Joseph and John Grimshaw joined their uncle in Ohio and were enumerated in Jefferson in 1850. Josephs son Samuel Grimshaw (1840-1918) was awarded the Congressional Medal of Honor for his service with the 52nd Ohio Infantry during the U.S. Civil War. He was cited for saving the life of his comrades by picking up [and dispatching] a lighted shell that had landed in the midst of the company.

Exactly how and why Samuel Grimshaw came to English Settlement remains unclear, but his reason for moving to Ohio was evidently to reunite with his brothers. He was a widower when he was enumerated at Green in 1860, and his daughter was married to a young physician named William Walton3. From 1867 to 1871 Dr. Grimshaw served as County auditor for Monroe County4. Samuel Grimshaw appears to have made the long journey back east and paid a visit to his friends in New Brunswick in 18675. He remarried late in life to Hannah (Freeman) Fleming and in 1870 they were settled at Woodfield, Ohio6. In 1880 they were living in Canton, Illinois7. Samuel Grimshaw was still living there in 1883 when his input was sought in order to settle the estate of the late John Saunders of English Settlement8.

5NARA, Passenger Lists of Vessels Arriving at Boston, Massachusetts, 1820-1891, M277, RG036. Samuel Grimshaw, physician, was listed as a passenger on the steamer Linda, returning to Boston from Yarmouth, Nova Scotia. The Boston-Yarmouth connection a regular weekly route with intermediate stops in Maine and at Saint John, N.B.

After providing the basic information on Samuel Grimshaw, Greg Haley sent another e-mail with considerable more detail on English Settlement; this e-mail is provided below.

RE: Samuel Grimshaw of New Brunswick

Here is some English Settlement background: it is located in the hills 12 miles northwest of Sussex, NB and lies on the line between the counties of Kings and Queens. Because it straddled two different counties, and as a result had two post offices, two schools, etc., it was decided in 1897 to separate it into two distinct communities and since then it has been known as Pearsonville (in Kings County) and Highfield (in Queens County). The settlement was first opened-up in the 1820s and was very rapidly settled. The original pioneers were from Plymouth, England, and had been involved with the great Royal Navy station there during the Napoleonic Wars. A second wave of English Settlers came from the Isle of Axholm area, near the Trent River at the junction of Nottingham, Lincolnshire and Yorkshire in northeastern England. A third group came from the Scottish border area near Carlisle, England. Soon other Scots and Irish bought out some of the original pioneers. All of these settlers came before 1840. Some moved on to other parts, of New Brunswick but most stayed in the area and their descendants are still there today. (Curiously, three families ultimately went to Australia, two via the South Seas whaling trade out of the port of Saint John.)

The settlement is located in a heavily forested set of hills between the upper Millstream valley in Kings and the Long Creek at the head of the Washademoak in Queens, and it is interspersed with some large streams that empty into the Long Creek. A road was built straight through from Millstream to Long Creek in the mid-1820s. The farms, almost all being 200 acres in size, were laid out in a regular pattern on either side of the road. The whole settlement was about 9 miles in length. Farming and lumbering were the primary industries. A single community hall served as school and place of worship for all denominations. Separate schools were established in the 1830s, and by that time there were blacksmith shops, shoemakers, and general store. The first local justice of the peace was appointed in 1840, and the community eventually had three, and they heard common court cases, and were supervised by the county circuit judge. In the 1840s the community received regular postal service (at first by horseback). Churches were built: Anglican 1847, Presbyterian probably around 1849, and Methodist sometime thereafter, probably before 1855. Various clergy attended on a circuit until the 1880s when the community gained resident Anglican and Presbyterian ministers. A saw and grist mill was built in 1851. The New Brunswick Central Railway had a terminal in the adjacent community of Annidale, from 1888 until the Second World War.

In 1833 the population was sufficient to have its own company of militia under the old system mandatory service, which remained in effect until the 1850s. When the new system of voluntary militia was adopted in 1862, English Settlement became the headquarters of one of the troops of voluntary cavalry later known as the 8th Princess Louise Hussars (Canada’s oldest serving cavalry regiment, now an armoured regiment). English Settlement sent troops to the Boer War (1899-1902), the Great War (1914-1918) and the Second World War (1939-1945).

At its peak in the late 1800s there were probably 500 persons living in the settlement. At that time dairy farming was very strong, and remained so until the 1950s. Lumbering always continued, of course. There was a cheese and butter factory at Pearsonville from 1917 until 1939. The population began to drop after WWI, and very much so after WWII: radio, cars and city jobs. Farming declined through the 1960s, 70s and 80s. At one time there were 27 farmers sending milk to market, now there is only one. It is today a quiet place, mostly hobby farms and woodlots, less than 100 persons, and the woods have reclaimed much of the landscape. In the 1840s Emily Beavan wrote that you could see from one end of the settlement to the other, so much had been cleared and put under the plough. Today that seems amazing, so much has re-grown.

That is probably far more then you wanted to know!

I don’t have any good pictures of the old settlement, but I am always on the look-out! I might take some pictures the next time I am down that way.

The information provided by Greg Haley was combined with the descendant chart on John and Margaret (Hartley) Grimshaw’s webpage (see companion webpage) to produce the following ancestor and descendant chart.

A Family Group Record of Samuel living with his parents Samuel and Mary (Shackleton) Grimshaw was found on FamilySearch.org and is provided below. Also shown are Samuel’s older brother, John, and younger brother, Joseph, both of whom migrated to Ohio as adults. 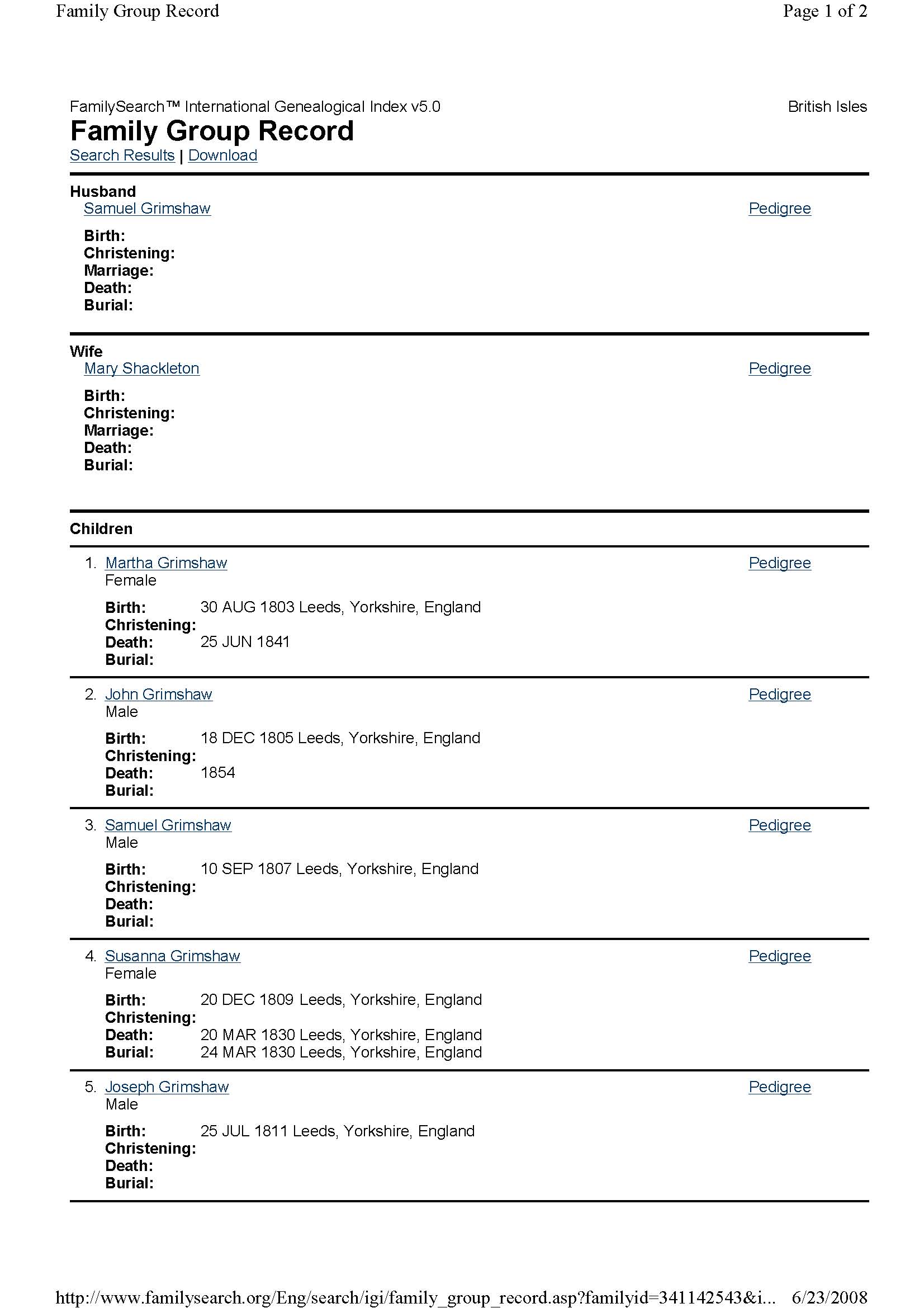 Samuel and Alice (McFarlane or McFarland) Grimshaw appear in the 1850 U.S. Census for Jefferson County, Ohio. An image of the record and explanatory text from a companion webpage (prepared before Samuel and Alice Grimshaw’s origins were known) is provided below. As noted, Alice’s mother, Catharine, was apparently living with the family. It may be hypothesized that child Mary was named after Samuel’s mother, Mary (Shackleton) – or possibly sister, Mary, Grimshaw.

Image of 1850 U.S. Census record of Samuel and Alice Grimshaw. Samuel, a 42-year-old physician, was living with his wife, Alice (age 35), and daughter Mari (age 10) in Jefferson County. Samuel was from England, and Alice was

from Ireland. Interestingly, Mari was born in New Brunswic did Samuel and Alice meet and marry in New Brunswick after immigrating separately? Catherine McFarland, who was living with the family, was in all likelihood Alices mother, since her age is about right and she too was born in Ireland

A map of most of the Canadian province of New Brunswick is provided below. It shows the location of Sussex, which is near Highland and Pearsonville (formerly English Settlement) in the southern portion of the province (southwest of Fredericton, the capital, and southwest of Moncton). Samuel and Alice Grimshaw lived northwest of Sussex. 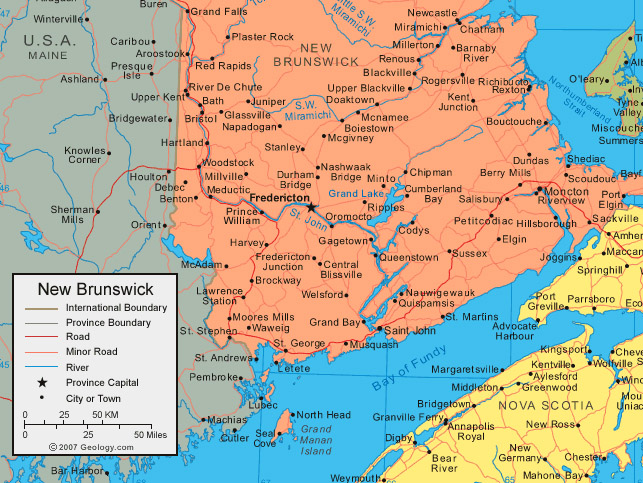 Highfield and Pearsonville, which are near where Samuel and Alice Grimshaw lived, can be seen northwest of Sussex in the map below.

A GoogleEarth Image of Highfield, Pearsonville, and Sussex is provided below. 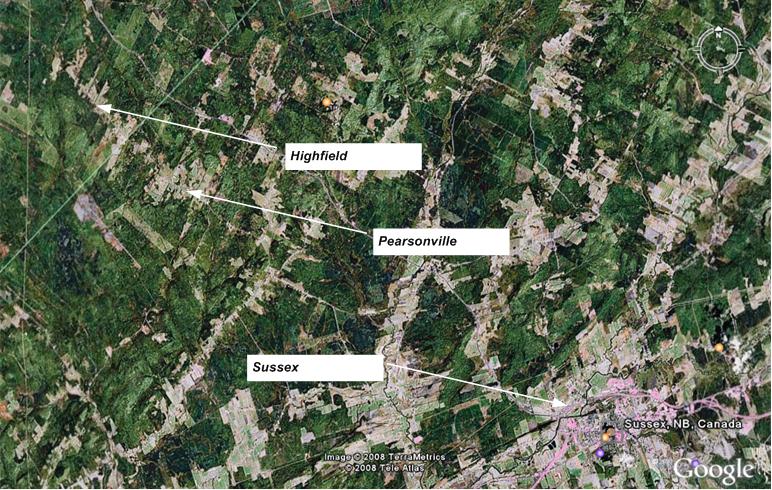