James Was a Descendant of the Yorkshire Grimshaw Line

Kevin Howley has identified the parents of James B Grimshaw as Joseph and Anne (Blackburn) Grimshaw, which means that James is descended from the Edward and Dorothy (Raner) Grimshaw line. A webpage has been previously prepared for James Grimshaw’s grandparents, Samuel and Mary (Shackleton) Grimshaw (click here). The tie-in of James to his ancestors is indicated below on this webpage.

James’ older brother, Samuel, received the medal of honor for bravery in the U.S. Civil War, as described in a companion webpage.

Those who wish to correspond about this family line are encouraged to contact Julie at the following e-mail address: 57julie@comcast.net.

Tie Back to Edward and Dorothy (Raner) Grimshaw Line

Several postings were made in 2001 and 2002 on Genforum and Ancestry.com that provided initial information on James B and Mary (Coax) Grimshaw. These postings are included on the “Grimshaw Indications” Webpage, a companion webpage on this website, and are shown below.

James B and Mary (Coax) Grimshaw

I am trying to find info on Grimshaw that married Mary Coax b. abt 1850 in Reynoldsville PA. They had two sons – Harry and Pershing. I believe they lived in NJ

I found the it was James B. Grimshaw married to Mary Coax. Their son was Pershing or Percy Grimshaw. She also had a daughter Millie Hagerty. Percy married Luella Harvey from Ohio. they had children which include: Vera, Marguerite or Mary, Forrest and Donald. The children were in the Soldier and Sailors orphanage in 1930. Percy remarried Stella and lived in Dayton Ohio in 1930. I would like to find the descendants.

Then in October 2003, Diane Syron posted the following message:

I am writing in behalf of my mother. She is trying to research my half brothers family history for them. She was married to Robert Taylor Grimshaw, born November 29, 1925. they had two children, Steven Taylor Grimshaw and Richard Blaine Grimshaw. My mother was in the OS & SO Home in Xenia, Ohio. They dated when they were teenagers but lost contact after Robert went into the service. My mother then met and married my father, Robert Lewis Dutcher.

My mother’s brother, Olin was older than her and he was friends with Donald Harvey Grimshaw, one of Robert’s brothers. Robert also married and I believe his wife was murdered in Ohio. Sometime after my mother and father divorced she met Robert again in Columbus, Ohio where he was stationed. They eventually married and moved to California. They later divorced. He lives in California with his third wife. I believe he retired from the Navy. She also thought Robert’s father’s name was Percy or something similar to it. She also thought there was mention of them living in both Pennsylvania and New Jersey. She now resides in Hebron, Ohio.

She said there were 7 children in the home from that family and that Vera and Mary were older sisters of Robert and Donald. She is going to mail me the information she has been able to attain so far. It is not a lot but I found information through Ancestry.com that shows information from the 1880 Census that shows J.B. Grimshaw born in 1846 in Ohio, with an occupation of Druggist. His father’s birthplace was England and mother’s birthplace was PA. His wife’s name was Mary. She was born in 1851 in PA. Both of her parents were born in PA. The house hold contained a Mille Hagerty, stepdaughter to J.B. Grimshaw, she was 6. It states both of her parents were born in PA. Pershing Grimshaw, 2 born in PA. and a sister-in-law to J.B. Grimshaw, Jemima Coax, 19 born in PA. This was from the census from Driftwood, Cameron, PA. Hope this helps. If you find anything about the Grimshaw’s we would love to hear it. Likewise any info. we discover we would be glad to share.

Where to start? My father is Donald Harvey Grimshaw. He is one of 7 children that were placed in the OS&SO Home (Orphan Sailor And Soldiers Orphan Home in Xenia, Ohio. This was around 1928. His father was Percy Grimshaw. He was married to Louella Harvey. Have been told that Louella is a cousin(s) to Eli Harvey. Trying to find a place to start to trace.

Julie Smith, in July 2003, responded to Paul with the following:

I believe Percy Grimshaw was the son of Mary Coax Grimshaw. I found he had two children to Luella, vera and Mary. That was all I had. 7? What happened to Luella and Percy? Mary Coax was sister to my g grandfather.

The following is a chain of entries on Ancestry.com regarding this line of Grimshaws.

I am trying to find info on Grimshaw that married Mary Coax b. abt 1850 in Reynoldsville, PA. They had two sons – Harry and Pershing. I believe they lived in NJ.

A Harry Grimshaw married Florence Moore – my g. uncle’s daughter. They lived in Paterson,, N. Jersey. Florence was born there, but her parents moved from Coventry in England. not sure of exact date, but they are listed in Paterson in 1891. Harry has a living nephew named Harry Huber, he still lives in the area. Any connection, please reply.

Can you find out if Harry had a brother named Pershing? The years match. With such an unusual name we surely could tie if you find that.

I don’t know if he did, but his nephew is still around. I will write to him as soon as I can. As he married my g.g. Aunt Florence Moore-can you be of any help to me in that direction. Florence’s father ran a jewelry shop at 386 Main and lived 143,Hamilton Ave Paterson. Harry Grimshaw ran the shop until he became ill with cancer after my g. uncle retired. Perhaps we can help each other. Thanks

Hi again. Just checked some notes and really need to know where your side of this fits with mine. It’s possible Harry G had a sister. If that’s so, the line leads back to the parents being English. If so there are still living relatives this side of the ocean I could check out. The Moores are from England also, although Florence was born in America. Not sure about her 2 brothers as I don’t know exactly what year my g. uncle emigrated. Contact me with some detailed information about your sides connection and I can perhaps solve the problem.

Based on the above information, the following preliminary descendant chart was previously constructed, but has since been shown to be erroneous. The Percy Grimshaw who married Luella Harvey was apparently not the Pershing Grimshaw who descended from James B and Mary (Coax) Grimshaw. Percy Grimshaw and his ancestors and descendants are still being researched.

Kevin Howley sent the following e-mail with an attachment indicating the family origin and descendants of James B Grimshaw:

I noticed your listing on the site relative to Pershing Grimshaw and I wanted to provide this update. I’m pretty sure that the Percy Grimshaw you note is NOT the Pershing Grimshaw that belongs to my family. [I’m the Blackburn tree guy.] Percy lists his parents having been born in PA and OH, respectively. Pershing’s were born in OH and PA, matching the above. The dates for the Pershing in Biddeford also match.

The information in the attached file from Kevin is shown below:

Joseph Grimshaw was married to Anne Blackburn (daughter of James Blackburn and Hannah Newlon) on March 12, 1839 in , Jefferson, OH. Anne Blackburn was born about 1815 in N. Huntingdon Twp., Westmoreland, PA.

Joseph Grimshaw and Anne Blackburn had the following children:

Samuel Grimshaw was married to Matilda —.

Samuel Grimshaw and Matilda — had the following children:

James B. Grimshaw and Mary B. Coax had the following children:

Pershing Grimshaw was married to Emma — about 1904.

Hannah Grimshaw and Andrew Barber had the following children:

A. Charles Barber was born in February 1870 in Smithfield, Jefferson, OH.

B. Anne Barber was born about 1873 in Smithfield, Jefferson, OH.

C. Alma Barber was born about 1875 in Smithfield, Jefferson, OH.

D. Mary Barber was born about 1878 in Smithfield, Jefferson, OH.

Not long before the e-mail was received from Kevin Howley, the following two messages were posted on Ancestry.com by unknown Watson and Julie unknown. These messages provide invaluable addtional information on James B and Mary (Coax) Grimshaw.

Re: Grimshaw and Mary Coax-PA

Julie, go to second paragraph, your Grimshaw is the brother of my Grimshaw.

John Grimshaw, of Driftwood, Cameron Co., PA married 23 Sep 1880 in Driftwood to Catherine W. Moynihan, she was born 12 Dec 1861 in Warren Co., PA (her year of birth is in question), she died 4 Nov 1926 in Jamestown, Chautauqua Co., NY. I have very little info on John, according to 1880 Driftwood census prior to his marriage, he was born 1857 in OH, father born in England, mother born in PA, he was a bartender at a local Driftwood Hotel. My dads younger brother described John as a no-account & a bootlegger. I have no record of whatever happened to John, family members either didnt know or wouldnt talk about it.

Joseph Grimshaw is buried alone in the Elk Section of Lakeview Cemetery in Jamestown, his mother, Kate, is buried alone in the Catholic Section of Lakeview. Joseph married Nellie, I have just tidbits of information about her. In my grandmothers papers I found a penny post card addressed to Mrs. Joseph Grimshaw, Box 334, Falconer, NY, it contained no message, no postmark, or name of sender. Following WW2 while my uncle was in the Jamestown Police Department, he and Herbert J. Grimshaw, Joseph & Nellies son, took Nellie to the County Farms insane asylum in Dewittville.

Herbert J. Grimshaw was my second cousin, but grew up in my dads generation. Herbs grandmother, Kate was the eldest sibling and my grandmother, Margaret Mary (Moynihan) Watson was the next to last youngest sibling. This generation slippage plus that I grew up in Westchester Co., NY made for a not too close relationship. I think Herb was married more than once, one wife was Mary Martyn, born 17 Feb 1920, died Mar 1981, Social Security residence, Jamestown. Mary is buried in Holy Cross Cemetery, Jamestown, next to her parents, John F. (1895-1972) & Mabel D. (1899-1953) Martyn. Social Security data base lists a Herbert Grimshaw (22 Aug 1909 – Aug 1983), SS res, Jacksonville, FL This was Herbs last address found in my parents address book.

One other mystery tidbit, a note on my Grimshaw worksheet describing a photo of a Mrs. Gladys Grimshaw and her daughter Pat, describing a August 2nd (no year given) marriage to a Jim Wiley ?

I would appreciate any additional information and welcome any detailed inquiries.

Re: Grimshaw and Mary Coax-PA

Mary COAX, at age 18, had her first child, Harry, but was unwed. About age 23, she married Miles L. HAGERTY who was born in 1846. They had one child, Millie. Miles father, James S. Hagerty, was born July 17, 1806 in Mercer, PA. Miles mother, Sarah WEBSTER, was born in 1808 in New York. By 1877, Mary was married to James B. GRIMSHAW who was born in Ohio in 1844. James was a druggist. James B. Grimshaws father was born in England. Mary and James Grimshaw lived in New Jersey for many years. After James Grimshaw died, Mary returned to Dubois to live near her son Harry Coax. Children of Mary COAX were:

The following 1880 U.S. Census record for James and Mary Grimshaw is from a companion webpage.

Two records relevant to the family line of James and Mary Grimshaw were found on the LDS FamilySearch website and are shown below. 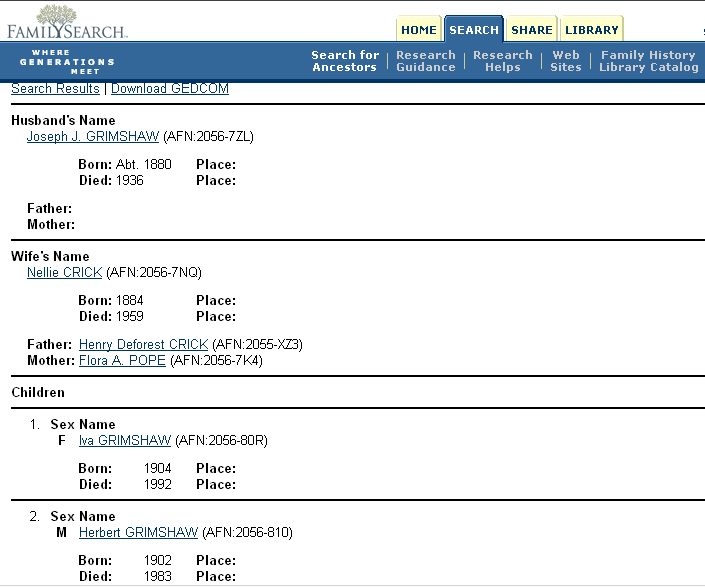 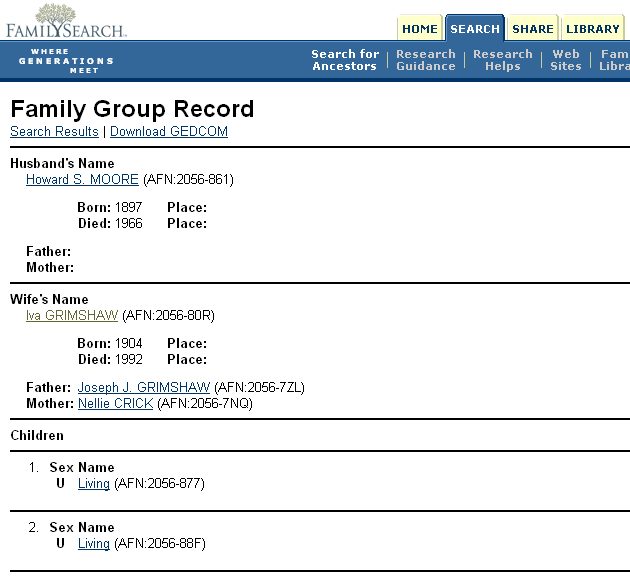 Based on the above information, the following ancestry and descendant chart has been constructed for James B Grimshaw.

The tie back to the Edward and Dorothy Grimshaw line is shown in the following descendant chart.

Thanks go to Julie for providing the following photo of Mary’s father, John Coax.