Francis E and Frances A (Collum)

Francis E Grimshaw was born in New York in about 1833. Frances A (“Fanny”) Collum was also born in New York, in about 1839. Francis and Frances were married on September 22, 1857 in East Hampton, where they apparently settled and raised a large family of about 13 children, including Richard E, Mary J, William S, George B, Francis (“Frank”) E, Frances (“Fannie”) M, Samuel C, James H, John, Elijah C, Charles and Frederick Grimshaw.

Possible Descendants of George B Grimshaw

Where is East Hampton, New York?

Thanks go to Tom Grimshaw and Mike Grimshaw for making contributions to this webpage on possible descendants of George B Grimshaw, son (fourth child) of Francis and Frances Grimshaw.

Francis Grimshaw and Frances Collum were married in East Hampton, New York on September 22, 1857 according to records of the Town of East Hampton1. A copy of the record is shown in Figure 1 below.

Figure 1. Portion of marriage records of East Hampton, showing marriage of Francis and Frances on September 22, 1857. 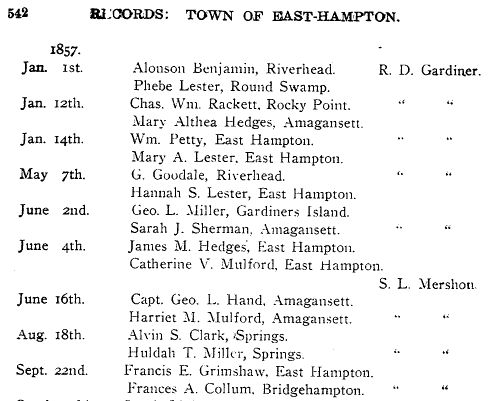 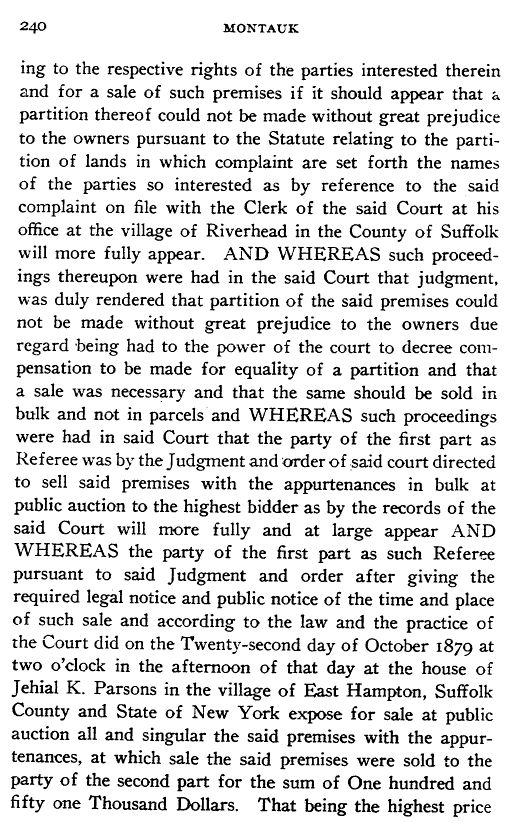 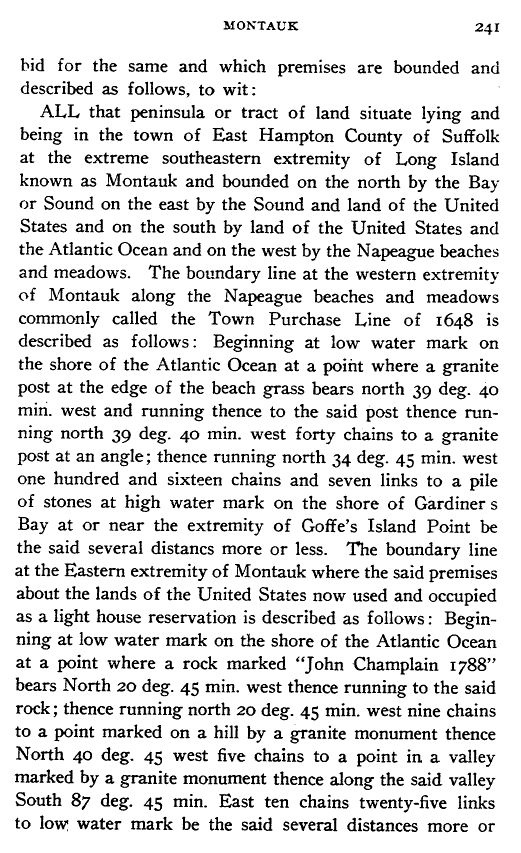 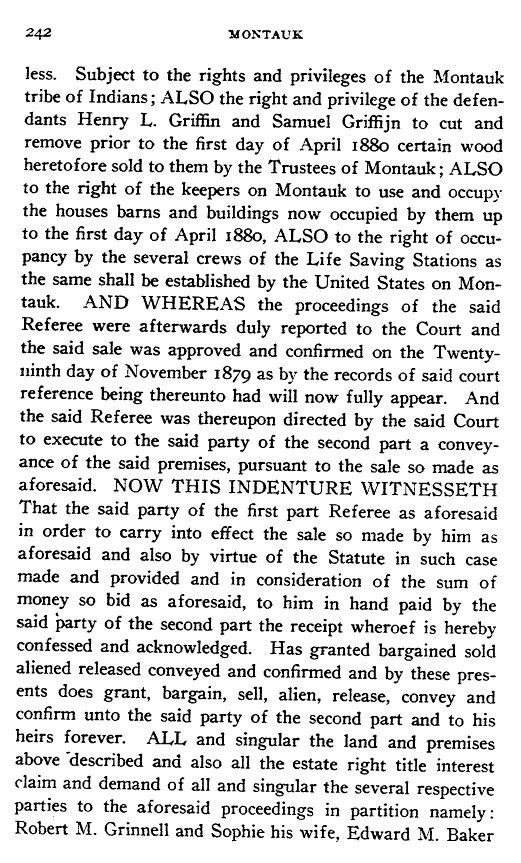 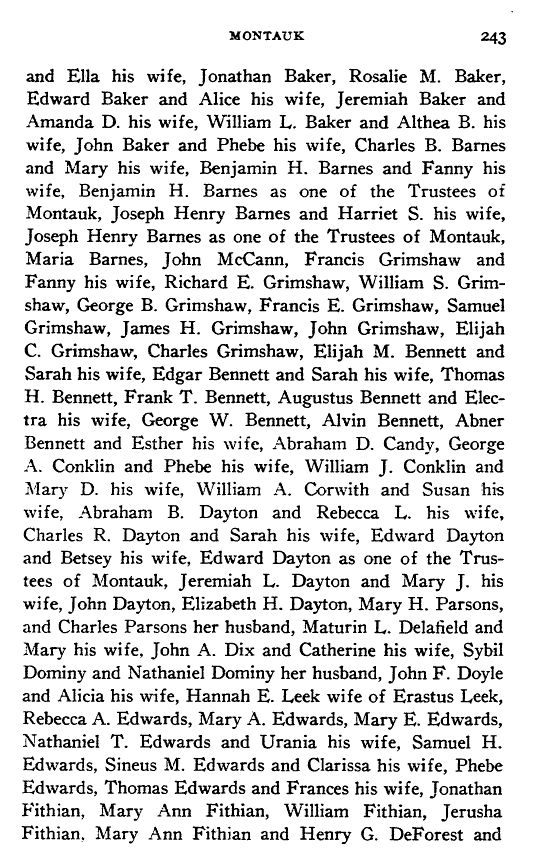 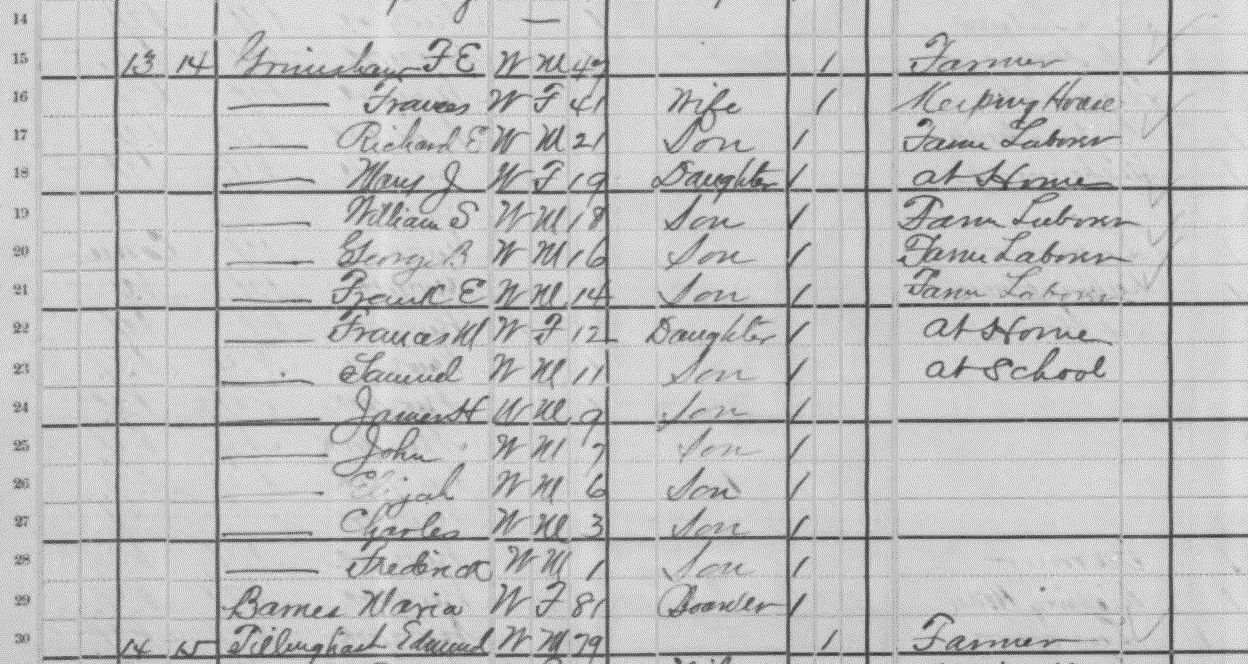 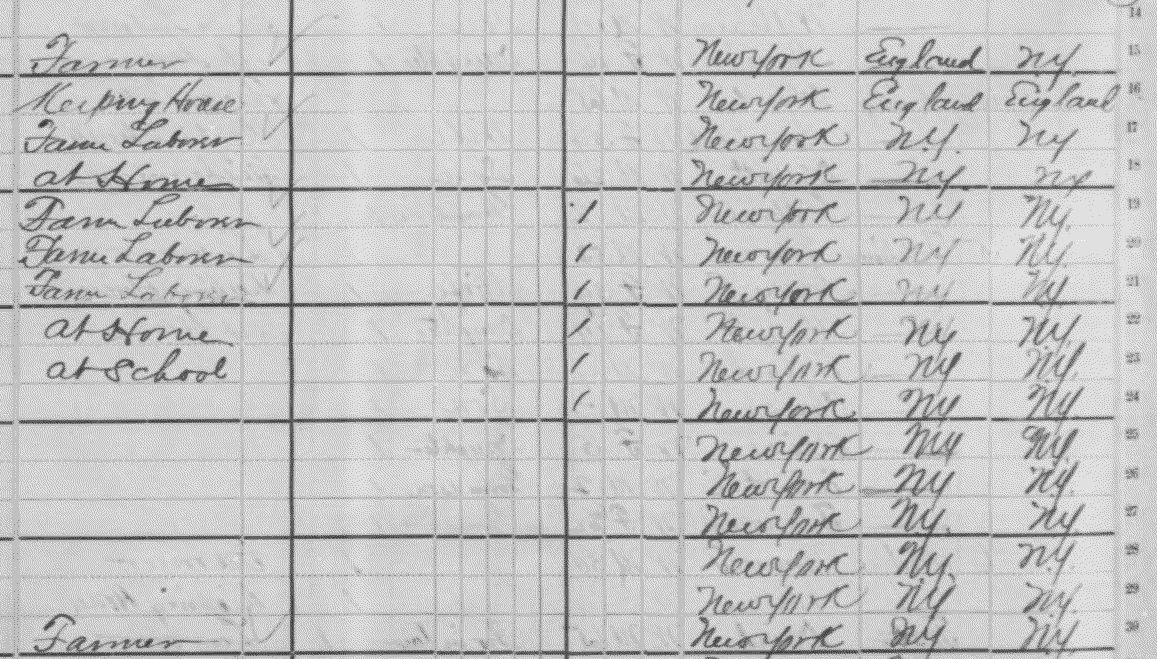 The following letter from the Edwin A. Grimshaw collection provides a bit of information on the descendants of the oldest son of Francis and Frances.

Found your letter very interesting. Your branch of the family may go back to my husbands grand fathers family. His grand father was Richard Edward Grimshaw and one of thirteen children – most of whom were boys.

He came to East Hampton, L.I.N.Y. at an early age, I believe 16, and as far as I know, always lived there and died at age 83. Dont remember if he had been born in that area.

His only child, son, Chauncey Edward, D. had 2 sons. William John, killed in auto accident at age 21 and my husband, Fred A. (Frederick) D. 1979. We have 2 children; Richard John, living in Lititz, Pa and a daughter, Carol Baggett, living in Mesquite, Texas. Richard has 2 daughters, married, and one son, John Frederick, who is in the Air Force in Okla.

Since we moved from Long Island to Fla. 9 years ago, we often had people stop by to ask if we know Grimshaws from Mich, Boston etc. None of which were known to us.

Hope this may be of some help to you.

The following entry from a companion webpage on “Indicated Immigrants” provides a bit of information on the descendants of the James Henry Grimshaw, seventh son of Francis and Frances:

Having difficulty finding birth/death dates for all mentioned. Filer side of family documented in a publication “East Hampton History & Genealogies”.

Anyone with positive information please contact me at kadams@bak.rr.com.

The above information permits the construction of the following preliminary descendant chart for Francis and Frances Grimshaw. Approximate birthdates are from the 1880 U.S. Census.

Possible Descendants of George B Grimshaw

The following photos are from Michael Grimshaw, October 2008… 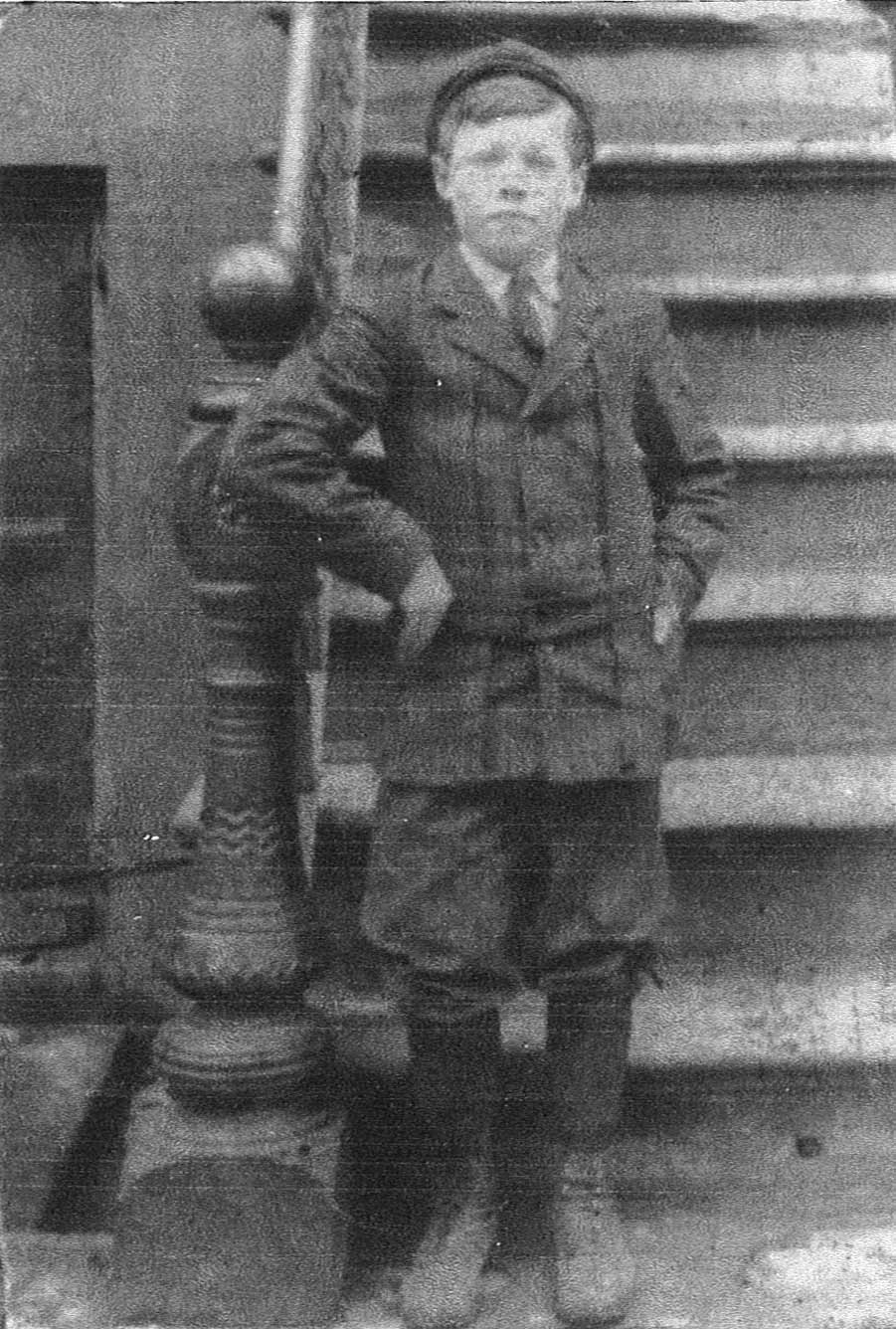 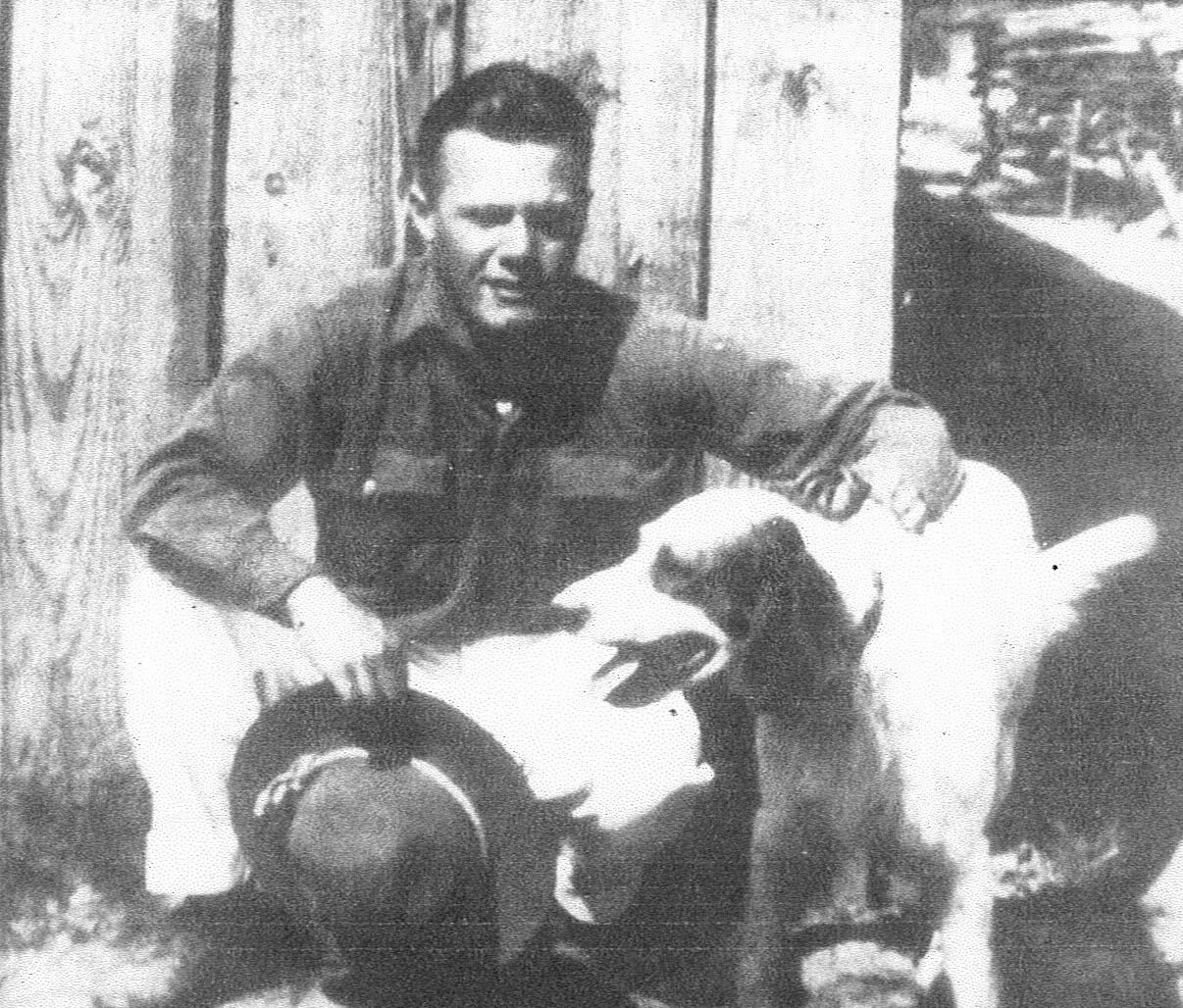 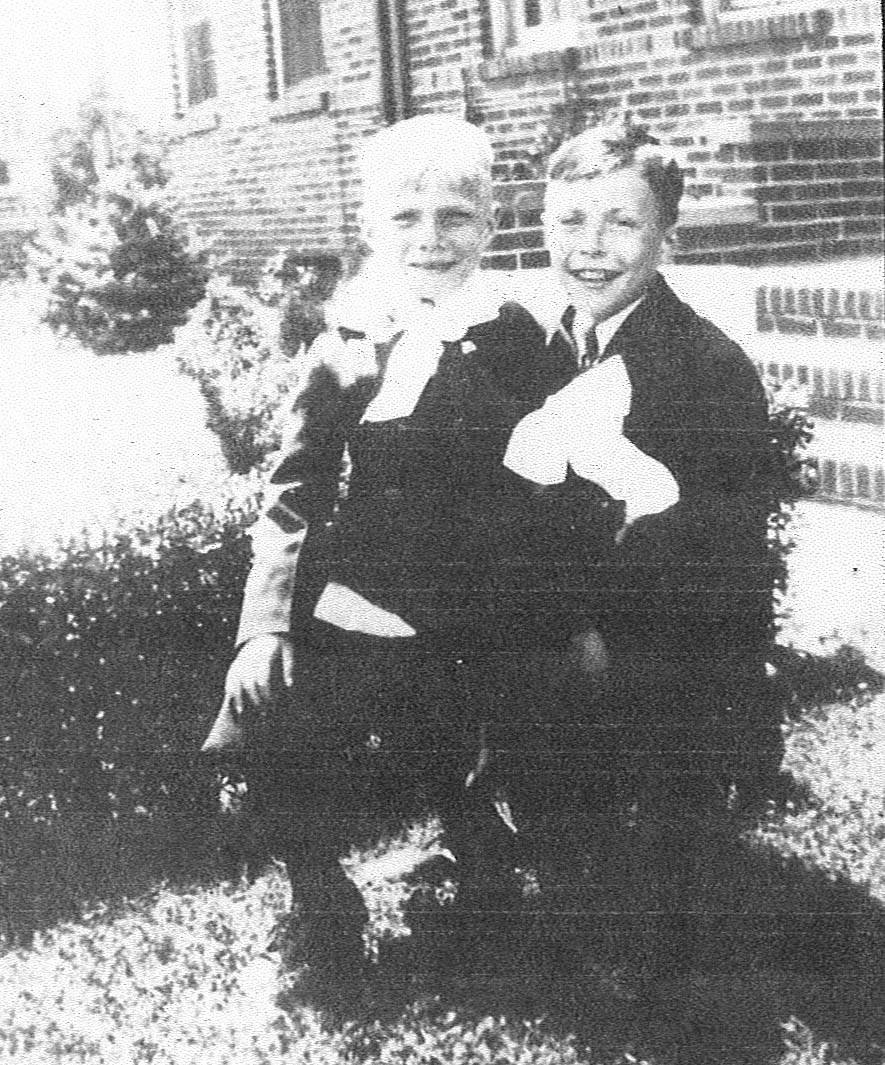 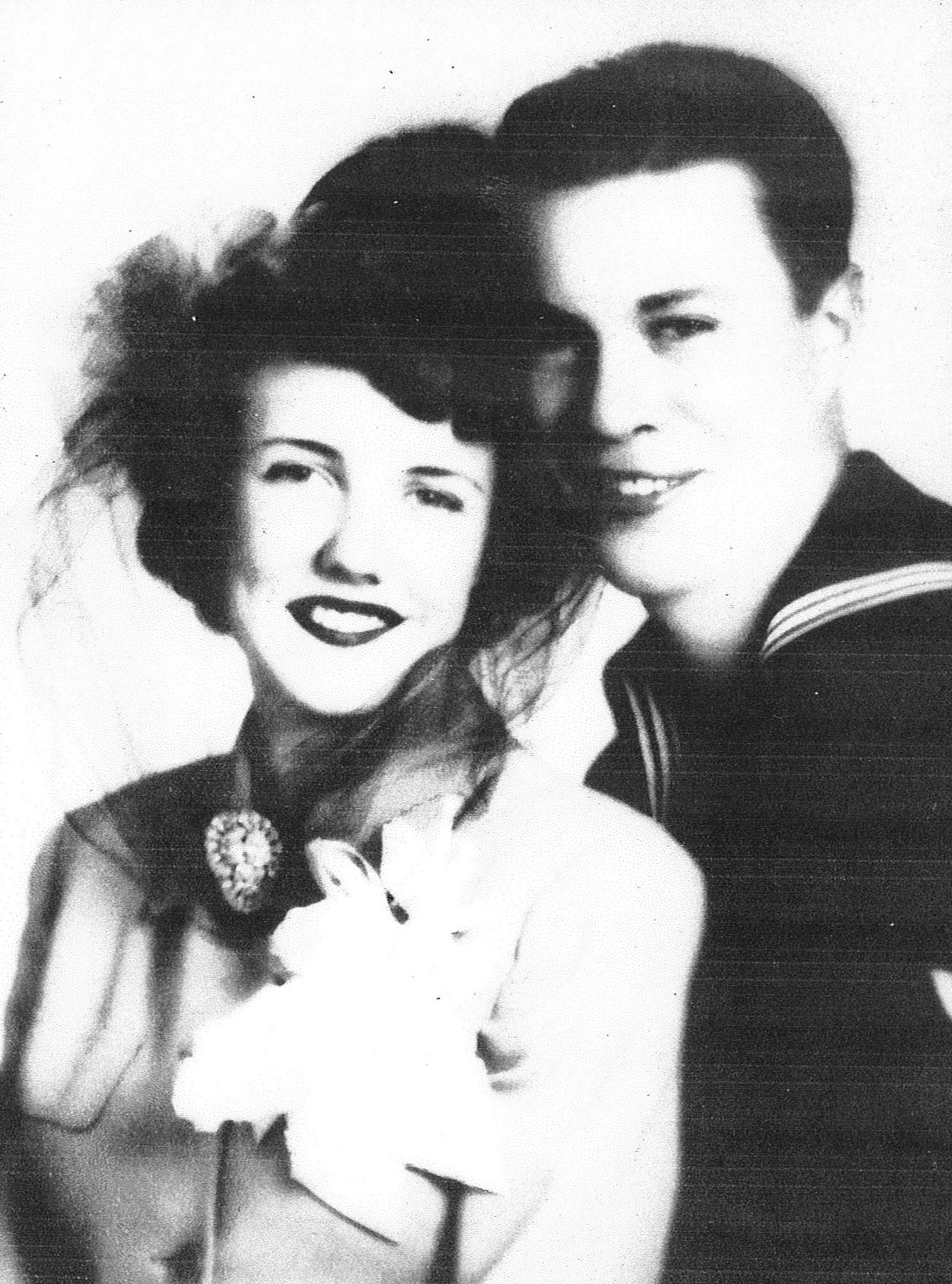 Francis Bowker Grimshaw was born in right timeframe (1806) to be father of Francis Grimshaw (b. ca 1833). Frances E Grimshaw, grandson, gave four of his children the same names  – Richard, Francis, Samuel, and John – as the children of Richard (different birth order – John, Richard, Samuel and Francis).

Parents of Francis Grimshaw, Sr, are proposed to be Richard D and Elizabeth (Bowker) Grimshaw. 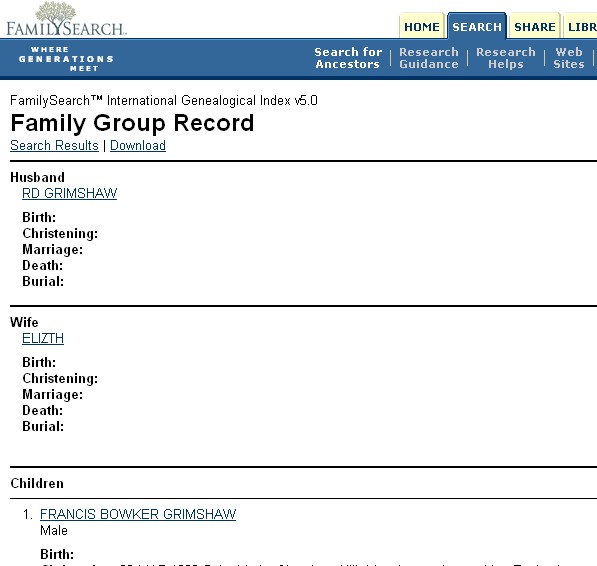 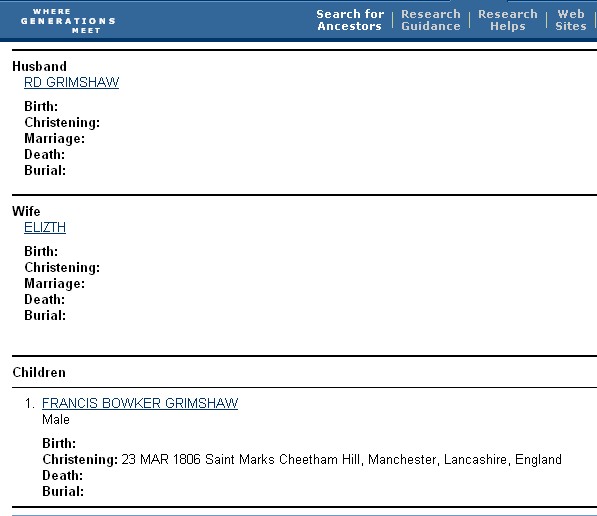 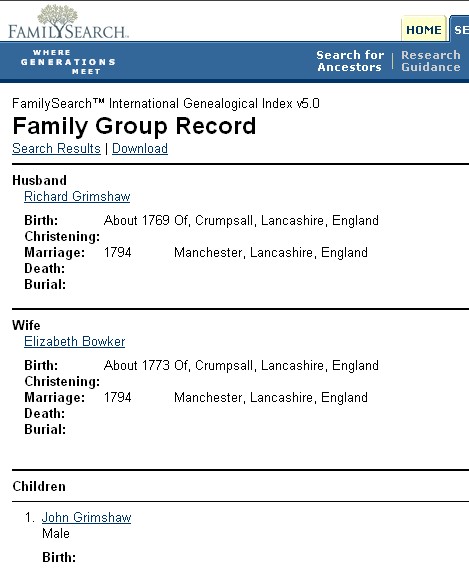 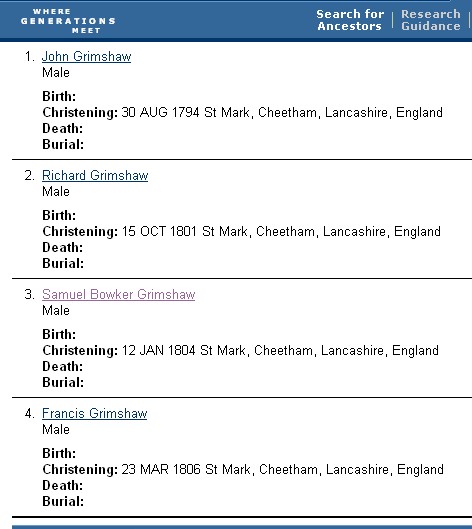 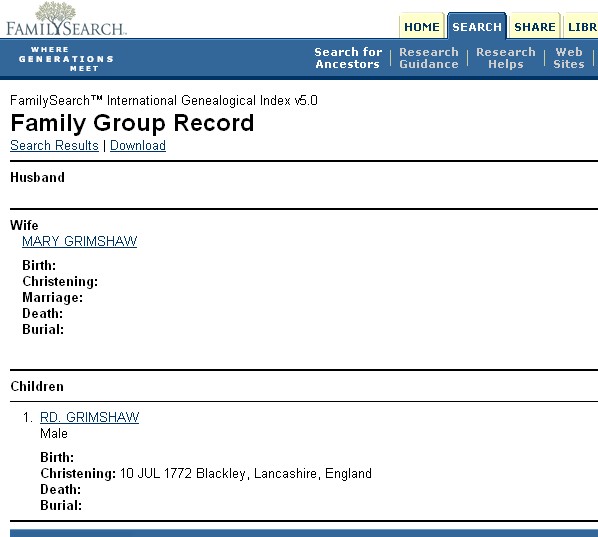 Resulting descendant chart (if all the above speculation is true)….

Cheetham Hill, Crumpsall and Blackley are all on the north side of Manchester, not far from Prestwich. 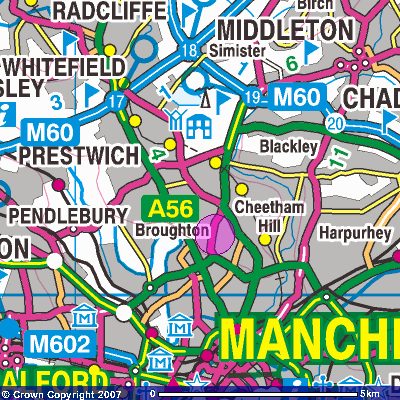 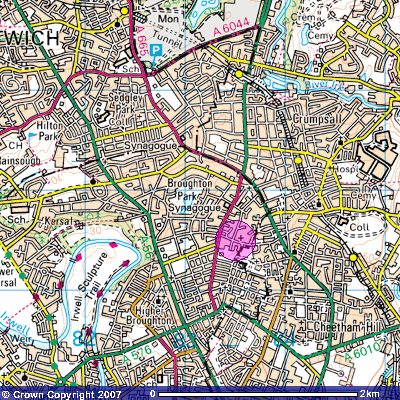 It seems likely that this family line is connected to one of the Prestwich Grimshaw lines (see companion webpage), but this hypothesis is based only on geographic proximity. Mary Grimshaw may be descended from one of the three family lines started by three apparent brothers, John, James and George Grimshaw, who initiated their families in about 1680.

Where is East Hampton, New York?

East Hampton is in Suffolk County, on the east end of Long Island. Maps are shown below.

The two views of the lighthouse shown below represent contrasting moods… 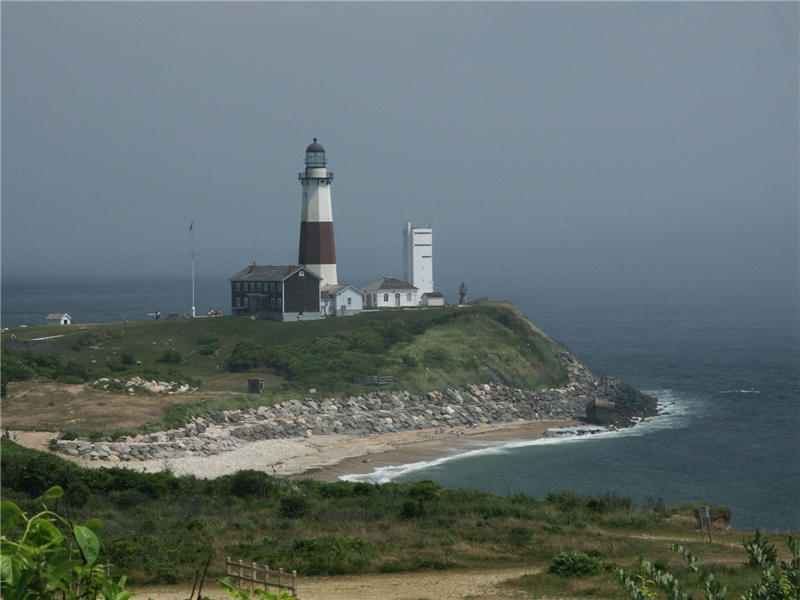 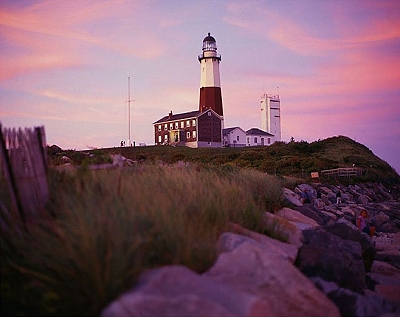 Maps showing the location of Montauk Point are shown below. 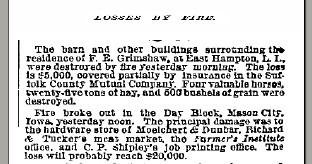