1820 U.S. Census Records for Grimshaws as Recorded on Ancestry.com

The website Ancestry.com offers online images of the entry pages of many of the censuses of the U.S., including the 1820 census. The 1820 U.S. Census has been indexed by “head of household”. A search of the index for “Grimshaw” and “Grinshaw”  yielded a total of seven entries (including one duplicate). The Ancestry.com website address for the census search service is shown below. Considerable information has been found in research for this website for five of the seven Grimshaws recorded in the 1820 Census.

Grimshaws Listed in the 1820 U.S. Census

Images of Grimshaw Entries in the 1820 Census

The Three Grimshaws Whose Records Were Not Among the Images

Description of the 1820 Census

The Grimshaw entries are shown in the following table. Two were in New York, one in Ohio, two in Pennsylvania (one a duplicate entry), and one in Virginia.

For each Grimshaw entry in the census, an attempt was made to obtain the associated online image. Four of the six Grimshaws (seven images) were available and have been posted below. A larger image of the entry is provided first, followed by a more complete portion of the page on which the entry appears. The columns in the census forms are as follows:

The records for the four Grimshaws for whom images were available are summarized below.

Zephaniah, between 26 and 45 years old, was living with a boy under 10 years and three females, two under 10 and one between 16 and 26 years old. One (presumably Zephaniah) was engaged in agriculture. Zephaniah and his complicated life are briefly described on a companion webpage. He is believed to be the oldest son of William Grimshaw, veteran of the U.S. Revolutionary War as described on aanother companion webpage. 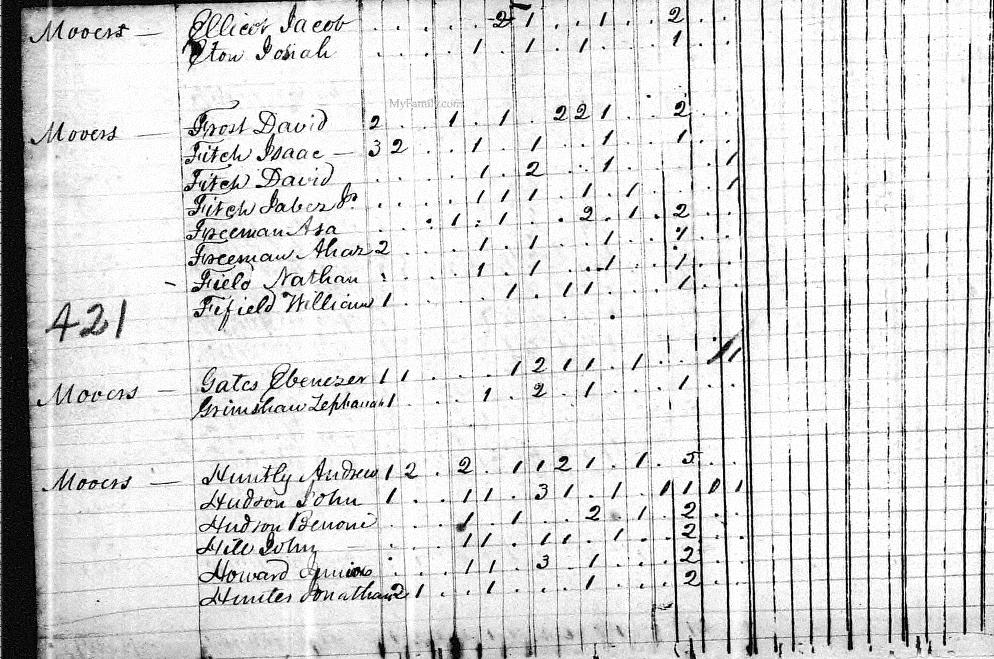 John Grimshaw over 45, was living with three boys, one 16-18 years old and two between 18 and 26 years old. There were six females – one over 45, one between 26 and 45, three from 16 to 26, and one less than 10 years old. One was a foreigner and three were engaged in agriculture. John Grimshaw went to Ohio via New York from Yorkshire as described on a companion webpage. 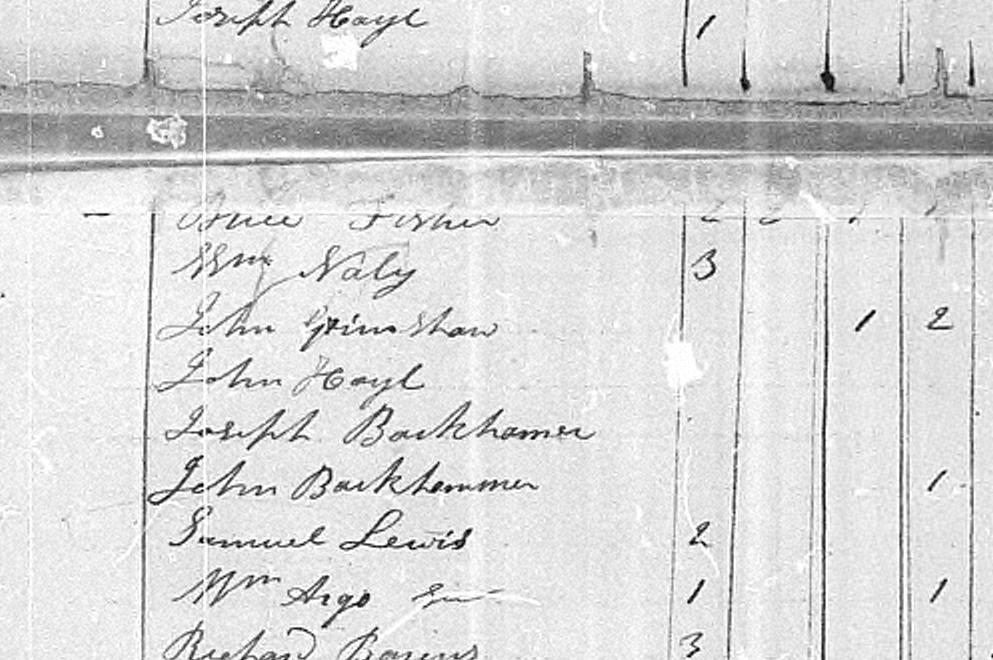 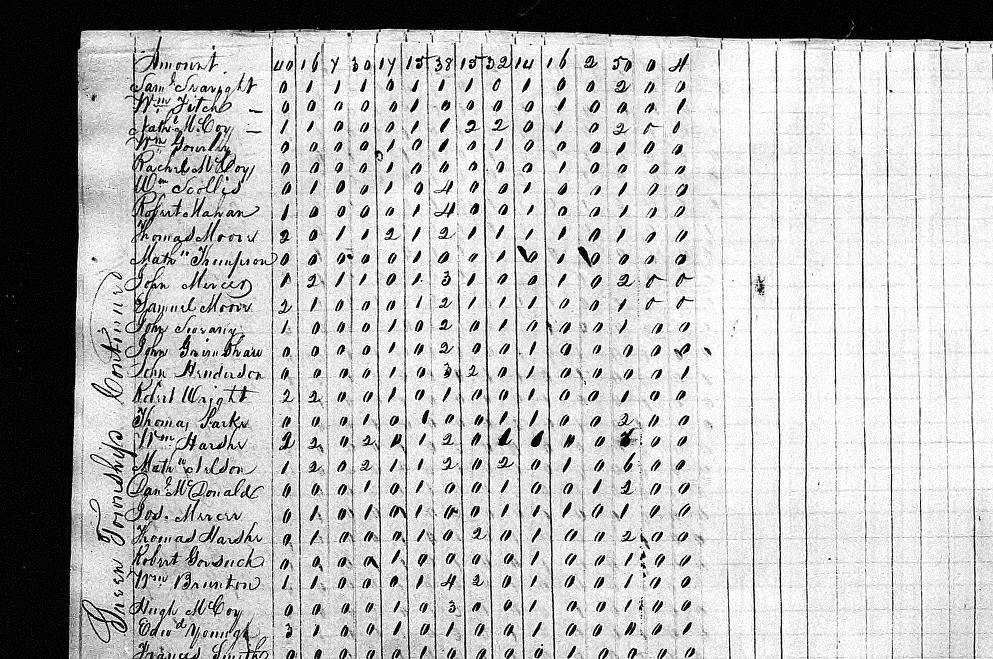 Thomas was apparently between 26 and 45 years old and his wife was in a similar age range. One of the the two boys was between 10 and 16 and the other was less than 10 years old. Two girls between 10 and 16 were also in the household. This family is believed to be that of Thomas and Onnar (Radden) Grimshaw, who were married in Alexandria Virginia in 1804 and moved to Frederick County before 1820 (see companion webpage). Their family may have included William Grimshaw (see companion webpage) who was living in Washington, D.C. and writing about black Freemasons (and was black himself) several decades later. 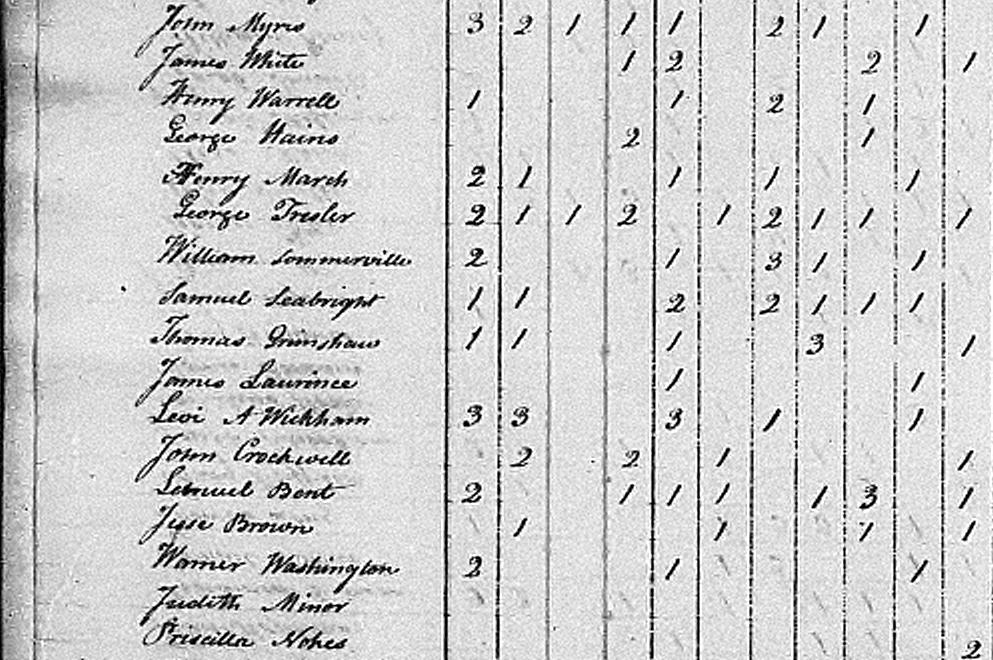 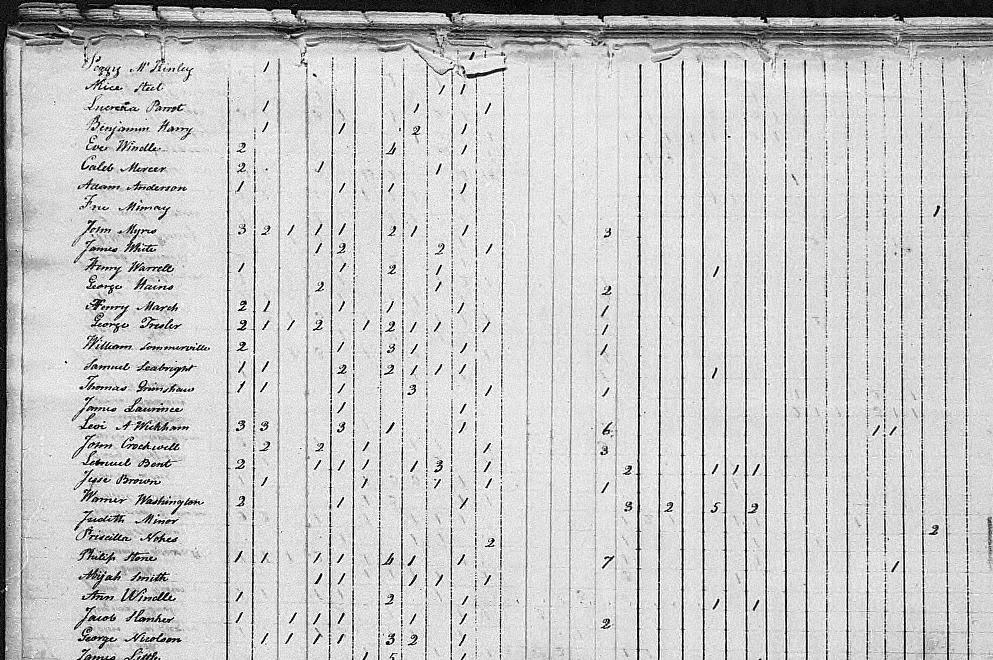 Joseph Grimshaw had two families, one started in England and the second started in the U.S. as described in a companion webpage. William Grimshaw of Philadelphia was probably the William who was from Ireland and wrote numerous history textbooks and other works (see companion webpage). His youngest son, by a second wife, was Robert Grimshaw, who became a well-known mechanical engineer who also wrote numerous textbooks and other works. It is possible that William Grimshaw may have been the one who was the head of a line of Grimshaws that moved west from Philadelphia to Minnesota when the area was still a western wilderness, as described in a companion webpage. His son, Robert Grimshaw grew to prominence in Minneapolis, and one of his grandchildren was Robert Grimshaw, who became a prominent citizen in Deadwood, SD.

This database details those persons enumerated in the 1820 United States Federal Census, the Fourth Census of the United States. In addition, the names of those listed on the population schedule are linked to the actual images of the 1820 Federal Census, copied from the National Archives and Records Administration microfilm, M33, 142 rolls. (If you do not initially find the name on the page that you are linked to, try a few pages forward or backward, as sometimes different pages had the same page number.)

Enumerators of the 1820 census were asked to include the following categories in the census: name of head of household, number of free white males and females in age categories: 0 to 10, 10 to 16, 16 to 26, 26 to 45, 45 and older; number of other free persons except Indians not taxed; number of slaves; and town or district and county of residence. Additionally, the 1820 census for the first time asked the number of free white males 16 to 18; number of persons to be naturalized; number engaged in agriculture, commercial, or manufacture; number of “colored” persons (sometimes in age categories); and number of other persons except Indians. The categories allowed Congress to determine persons residing in the United States for collection of taxes and the appropriation of seats in the House of Representatives. Most entries are arranged in the order of visitation, but some have been rearranged to appear in alphabetical order by initial letter of the surname. Manufacturing schedules are scattered among the 1820 population schedules.

U.S. Federal Census index. For details on the contents of the film numbers that have not been linked yet, visit the following N.A.R.A. web page: N.A.R.A.. The linked images for these rolls of film will be made available on Ancestry.com in the near future. This database is certain to prove useful for those seeking early American ancestors.

The official enumeration day of the 1820 census was 7 August 1820. All questions asked were supposed to refer to that date. The count was due within six months, but the due date was extended by law to allow completion within thirteen months. By 1820, there were a total of twenty-three states in the Union. The six new states were Louisiana, Indiana, Mississippi, Illinois, Alabama and Maine. There was, however, a district wide loss for Arkansas Territory, Missouri Territory and New Jersey. Partial losses included half the counties in Alabama, and roughly 20 eastern Tennessee counties supervised by the Federal Court District out of Knoxville. Some of the schedules for these states have been re-created using tax lists and other records.

Before the automated search capabilities became available on Ancestry.com, a manual search of printed census indexes was performed, as described on a companion webpage. The results of this search for the 1820 index (and a prior
census) are summarized below.

In addition to the Grimshaws listed previously, this survey found Eliza in Virginia, John and William in Beaver County, Pennsylvania, and four possible Grimshaws in Tennessee (Daniel, Sarah, Randall, and John).