In the Areas of Earliest Grimshaw Individuals and Families, around Pendle Hill, Preston, and Blackburn

Mavis Long has conducted extensive research on many different aspects of early Grimshaw family history throughout the area where the family originated around Pendle Hill, Preston and Blackburn. Her research in the earliest origins is benefiting Grimshaw researchers everywhere.

Overview of Research on Grimshaws at Three Locations

A Griffin at Whalley, Similar to the Edisford Griffin

Mavis’ research indicates that the Grimshaw surname and families originated at Grimsargh, where the many variants of the name “Grimsargh” include some that are very close to “Grimsagh” or “Grimshagh”, which are variants of the Grimshaw name (in the numerous variants of “Grimsargh” and “Grimshaw”, about the only distinction between the two sets of names is the occurrence of the second “r” in Grimsargh and not in Grimshaw).

The earliest recorded Grimsargh individual identified with that location was Gilbert de Grimsargh, whose exact date is unknown. However, he preceded William de Grimshaw, who is dated at about 1242. From Grimsargh, the Grimshaws (or their predecessors, Grimsaghs or Grimshaghs) apparently migrated northeast to Edisford and southeast to Eccleshill. A branch also appeared quite early at Cliviger, which is east of Pendle Hill, near Burnley.

According to one of the references found by Mavis (McKay), Grimsargh was the boundary on one side (Pendle Hill formed the boundary on the other side) of a region of sun worshippers – ancient Druidic Celts who were given the signifier “grim” by Saxon invaders as the term to signify their practice of sun worship. This reference also presumes a separate location for Grimshaw from Grimsargh, but presents no data to support the presumption except for the following statement: “Grimshaw” – not an uncommon name around Pendle Hill – since “shaw” signifies a wood or grove, becomes readily “the Wood or Grove of the Sun.”

Many researchers in the past have asserted that the name “Grimshaw” had Viking origins, including Rogers1 (see companionwebpage). However, Mavis has located a reference by McKay2 that indicates a potentially much earlier origin of the Grimshaw name. The following excerpt from a companion webpage describes the possible Celtic origins of “Grimshaw”:

James McKay, in a historical study of the Pendle Hill area based in large part on place-name analysis, associates the Grimshaw name with Grimsargh and Grindleton, which are located west of Pendle Hill near the Ribble River. For all three names, McKay makes the case that their associated locations were the sites of sun worship by Celtic Druids. The names were given to the Celtic locations by the Angles and Saxons who invaded the area after the Romans withdrew in the early 400s A.D.

According to McKay, the terms “grim” and “grin” are “forms of the one root word (that) signify the sun, when the term is used for that celestial luminary as a divinity, or as the object or symbol referred to in divine worship” (p. 101-102). McKay asserted that the names were given by the Angles and Saxons when they occupied lowlands that they had seized from the Celts (Segantii). The uplands (including the sites where the Druidic worship took place) were still held by the fierce Celts and could not be taken. Grimsargh and Grindleton, as well as other similar Celtic places referenced by McKay -Goosnargh and Tootall (Tootle) Heights – are still in existence today west and south of Pendle Hill. The original location of Grimshaw near Pendle Hill, however, may be lost to antiquity.

It seems apparent from this reference that the author believed that Grimshaw was a distinct name and location from Grimsargh:

In some parts it is called Grim’s Dyke, and as a matter of notoriety the country people of Wiltshire are frequently heard to speak of it as “The Devil’s Dyke.” This brings out clearly the probabilities of the etymology of the case. If the aboriginal pagan inhabitants called this Grim’s Dyke, or the Ditch of the Sun, as a title of sanctity, their Christian successors would assuredly call it the Dyke or Ditch of the Idol, or of the Devil; and if this origin of both words grim and grin be admitted, several other corroborative explanations will follow. Thus “Grimshaw” – not an uncommon name around Pendle Hill – since “shaw” signifies a wood or grove, becomes readily “the Wood or Grove of the Sun.” What Odin or Woden was to the later Saxon, Grim, or Grin, or Gryncoeus was to the Celtic races – for while to the Britons the sun was the central symbol of their worship, to their subsequent conquerors a gleam of sunshine was “the smile of Odin,” and so designated by them with all the truth of poetry. Grimsargh, then, was the boundary on one side, as Pendle Hill was on the other, of the region of the sun or devil worshippers. Of course it was the Saxons gave it this name, in recognition of a fact which they found existing when they penetrated to these parts.

Overview of Research on Grimshaws at Three Locations

Mavis’ research has found the earliest records for Grimshaws at three locations in the area around Preston, Clitheroe and Blackburn:

A. Grimsargh (northeast of Preston)

B. Edisford (southwest of Clitheroe)

The locations of Preston, Clitheroe, Blackburn and Burnley (mentioned in the webpage introduction) northwest of Manchester are shown below: 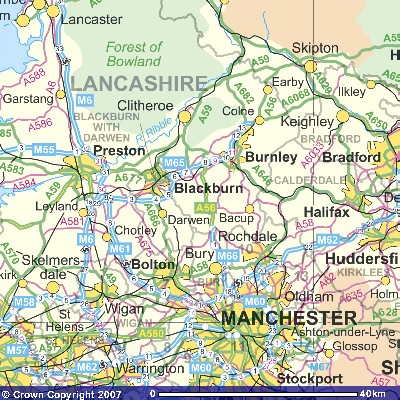 Mavis has provided the following summary of Grimshaw records for Grimsargh, Edisford and Eccleshill:

The following chart, compiled from many ancient documents, identifies three locations plus dates and names for the earliest Grimshaws found in Lancashire records. It is possible no earlier documents exist.