Charles T. Grimshaw, the son of Caleb and Sarah (Thompson) Grimshaw, was born in 1831 and died in 1903. Charles and Hannah Walker were married in a Quaker wedding on November 7, 1855 at Rawdon, near Leeds in Yorkshire. Caleb Grimshaw (Charles’ father) was apparently the person for whom the Caleb Grimshaw (an immigrant ship that burned and sank in 1849 with the loss of 90 lives) was named. The tragedy of the Caleb Grimshaw is the subject of a companion webpage.

Biography of Charles and Hannah Grimshaw

Photos of Charles and Hannah

The Lineages of Charles T. Grimshaw and of Hannah Walker

What and Where is Birkenhead?

Thanks go to Richard Walker for providing most of the information on this webpage.

Hannah Walker was born in Rawden, Yorkshire, England, on 20 Dec. 1820, the 2nd child of John and Mary (born Thompson) Walker.

Hannah attended Ackworth Boarding School at Ackworth, Yorkshire from 1832 to 1834.

On 7 Nov. 1855 Hannah married Charles Thompson Grimshaw at Rawden. Charles was born in Liverpool, Lancashire and became a Merchant of Birkenhead, the son of Caleb Grimshaw. At the time of Hannahs fathers death in 1866, Hannah inherited a third of his property, both real and personal. Her share, however, was in the form of interest on her share as the same becomes due from time to time. From the 1881Census Record, Hannah and Charles were living in Henley Cottage in Rawden, which was part of her fathers property. The 1881 Census also showed Hannah as age 60 and her husband Charles as age 50 born in Liverpool and therefore born in 1831. It is not known whether Hannah and Charles had any children. Hannah, of Rawden, died on 8 Feb. 1898 at age 77. She was buried in the Friends Burial Ground at Rawden.

Charles remarried in May 1900. In a letter dated May 1900 from Maria Walker of the city of York, to her brother Thomas of Beaconsfield, Ont., Canada, Maria says:- Charles Grimshaw has remarried to an old servant – very distasteful to nephews and nieces of Birstwith. Charles, of Laverton Grange, Laverton, Ripon, Yorkshire died on 16 May 1903. His effects were probated in 1904 at £1694.

Pictures of Charles and Hannah that were provided by Richard Walker are shown below.

Charles and Hannah Grimshaw. Date of photos unknown. They appear to have been taken on the same day, or at least at the same location. 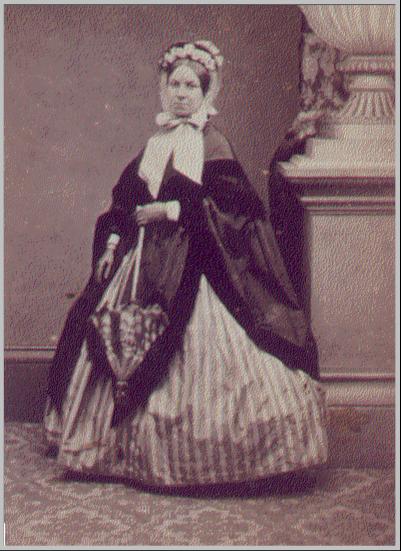 Richard Walker has provided an interesting 1896 Ordnance Survey map showing the location of Charles and Hanna in Rawdon along with a description of the features shown below.

John attended the Quaker Ackworth Boarding School at Ackworth, Yorkshire from 1804 to 1808. Following school he was apprenticed to Godfrey Woodhead of Foolstone, near Holmfirth. He later became a Clothier of Rawden, in the parish of Guisely, about seven miles northeast of Leeds (The modern spelling of Rawden is now Rawdon). He is described in Charles Walkers Note Book as being engaged in the woolen trade at Rawden, manufacturing cloth.

On 14 Oct. 1818, John married Mary Thompson at the Friends Meeting House in Rawden. Mary was born in Rawden in 1794, the daughter of Richard and Hannah Thompson. John and Mary had seven children, all born at Rawden:

Robert lived only 5 months. He was buried in the Friends Burial Ground at Rawden Meeting House.

Elizabeth attended Ackworth Boarding School from 1836 to 1839. She died on 16 May, 1854 at age 29 and was buried in the Friends Burial Ground at Rawden Meeting House.

Mary died at age 2 and was also buried in the Friends Burial Ground at Rawden Meeting House.

Sarah died at age 9 and she too was buried in the Friends Burial Ground at Rawden Meeting House.

John Walker kept an account book of his cloth manufacturing business in Rawden, which is presently in the possession of his Gr. Gr. Grandson, Christopher Walker of Bexhill-on-Sea, in East Sussex. The records show that he made cloth, both plain and coloured, from wool of domestic and merino sheep and that he shipped it to India and America by sailing ships. John dealt primarily with Cropper, Benson & Co. and Rathbone, Hodgson & Co. For example, on 24 July, 1821 he shipped 2 cases of woolens, died indigo, to Calcutta via the ship Albion per Cropper Benson & Co., at a cost of £187-7-0. James Cropper was a Quaker so it is not surprising that John Walker choose him as his shipping agent. Most ships at that time were registered (insured) with Lloyds of London. It should be noted that the Brig Two Friends, which was registered with Lloyds in 1775, was the same ship that Johns Grandfather,

Mary Thompson died at Rawden on 7 Dec. 1848 at age 54, and was buried in the Friends Burial Ground at the Rawden Meeting House.

John Walker, of Henley Cottage, Rawden, described in the Quaker Digest of Deaths located in Brotherton Library of Leeds University, as a Gentleman, died at Rawden on 2 Dec. 1866, at age 72. His Will, dated 1863, leaves his entire Estate, both real and personal, to be divided equally between his three remaining children and is witnessed by his brother, Spence Walker. His estate was valued at approximately £20,000. John was one of the siblings that inherited £7,800 from their brother, Joseph Walker, who died in 1835.

Indirect evidence from Richard Walker indicates that that Charles Thompson Walker is descended from the “Yorkshire” line of Grimshaws, whose earliest known ancestors are Edward and Dorothy (Raner) Grimshaw. Examination of the extensive descendant chart on Edward and Dorothy’s webpage shows that there is a line including Charles Grimshaw as follows:

A short lineage for Hannah Walker is shown below.

Unfortunately, Charles and Hannah had no children, so their line of Grimshaws did not continue.

As noted above, Charles was a “Merchant of Birkenhead”. This reference is to the large dock that was located across the Mersey River from Liverpool. The following description of the docks in 1847 was authored a few years before the time that Charles would have been active there.

On Monday last a portion of the immense Docks at Birkenhead was opened with the éclat befitting such an important incident, and a vast concourse of persons assembled to witness the ceremony. The works thrown open from but a small part of this magnificent and comprehensive scheme, but what has already been accomplished gives a goodly promise of a speedy completion of a most useful and efficient series of docks, the promoters of which may hope, at no very distant, day, to see them, on account of their extensive usefulness, worthy of being associated in importance with those on the other side of the Mersey. Birkenhead may now be said to have entered into competition, or rather into articles of partnership, with Liverpool, the great north outlet and inlet of our foreign and transatlantic trade. At any rate, it will henceforth divide the palm with Liverpool, and participate in the prosperity and profit derivable from its immense mercantile marine. Birkenhead may fairly be looked upon as of Liverpool lineage and alliance, and as having been literally called into life by that leviathan of trade itself in its effort towards finding an ampler field for the accommodation and convenience of its over-grown trade. Birkenhead will now become a sort of chapel of ease for the redundant commerce of the mother port, and probably there is no port in the kingdom, not excepting Liverpool itself, that presents such grand natural facilities. A few years hence, and Birkenhead will become a second Liverpool, launched upon the Mersey; for time was when, at the beginning of the eighteenth century, Liverpool itself, now the entrepôt of all our trade with the Americas and Indies, was simply a fishing village. The same a few years since might be said of Birkenhead. At present it is not even mapped out as a town upon the Mersey…. 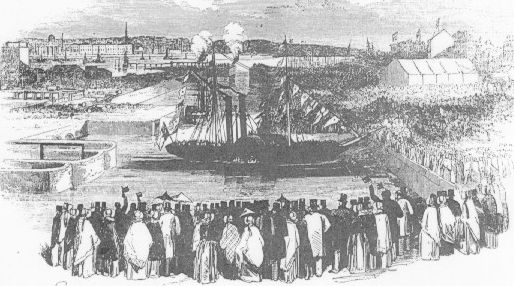 Both are probably the finest examples on record of the brilliant results of unfettered British enterprise. Anciently the settlement and consolidation of a town was the work of generations; now, thanks to steam, they spring up and prosper with all the rapidity of the famed ice palace of the Queen of Russia. Great advantage may be expected to accrue to the public and frequenters from foreign ports from the generous emulation that will be established between the old and the new ports, and in a few years the northern, no less than the eastern arm of the Mersey, may be expected to be the seat of a crowded and busy community. It will give no insignificant idea of the immenseness of Liverpool, that it extends for three miles along the Mersey, and is upwards of a mile in breadth. Liverpool has for years had at her command a comprehensive and splendid chain of railways, and unsurpassed port facilities. Upon these Birkenhead is only just entering. Monday gave England, in the latter respect, a new point of ingress and egress to the western seas; but Birkenhead will have to wait awhile for the completion of her railways. It is true she has long had one, but this is less than half what she wants. Ere long she will be the very “rosette” of railways, for, in addition to the existing Chester and Birkenhead, she will have the Birkenhead, Lancashire, and Cheshire Junction, operations on which have just been commenced by the contractors in real earnest, and which, in addition to drawing all the commerce of the manufacturing districts of Yorkshire and Lancashire to the Mersey, will give to Birkenhead the mineral trade of Wales, the salt traffic of Cheshire, the immense products of the Potteries, besides having with Holyhead the traffic to Ireland. If Rome was not built in a day, Birkenhead, by a figure of speech, assuredly has been. We have in it a great mercantile community, with all its moral and commercial apparatus springing simultaneously and almost magically into action under the vivyfying power of English enterprise. We have it put in possession, at the same time, of docks for forests of foreign masts, with warehouses for hiving their wares, and with a railway for their transit to inland homes….

Birkenhead is located across the Mersey from Liverpool, as shown below:

Location of Birkenhead across the Mersey from Liverpool.