Queen Vaiti, from the Cover of the 18 August 1906 Issue of The Saturday Evening Post

Beatrice Grimshaw published many serialized fictional articles in the journals of her day in addition to her numerous books. Beatrice and her life are described on a companion webpage. She apparently got started publishing in mainstream journals in 1906 with a series of five articles in The Saturday Evening Post. These articles had different titles but were all derived from Beatrice’s book, Vaiti of the Islands.

Click here for the full book as downloaded from GoogleBooks.

The first of the five articles was the cover story of the 18 August 1906 The Saturday Evening Post. The series of articles (one of which was published in two parts) is summarized as follows.

Then in 1908 an additional five articles appeared, again based on Vaiti of the Islands, as shown below.

The five articles published in 1906 are included in this webpage, starting with The Tale of the Pearl Lagoon.

The Book “Vaiti of the Islands” by Beatrice Grimshaw

As noted, the first article in the series was featured as the cover story in the 18 August issue of The Saturday Evening Post. The cover and text (which appears on pages 3, 4, 5 and 20) are provided below. The images appear separately in larger format than in the text. The artwork on the cover was by T. Rogers. Artwork in the text was by H.G. Williamson.

The cover of the 18 August 1906 issue is provided below in three parts so as to capture the full image of Vaiti. 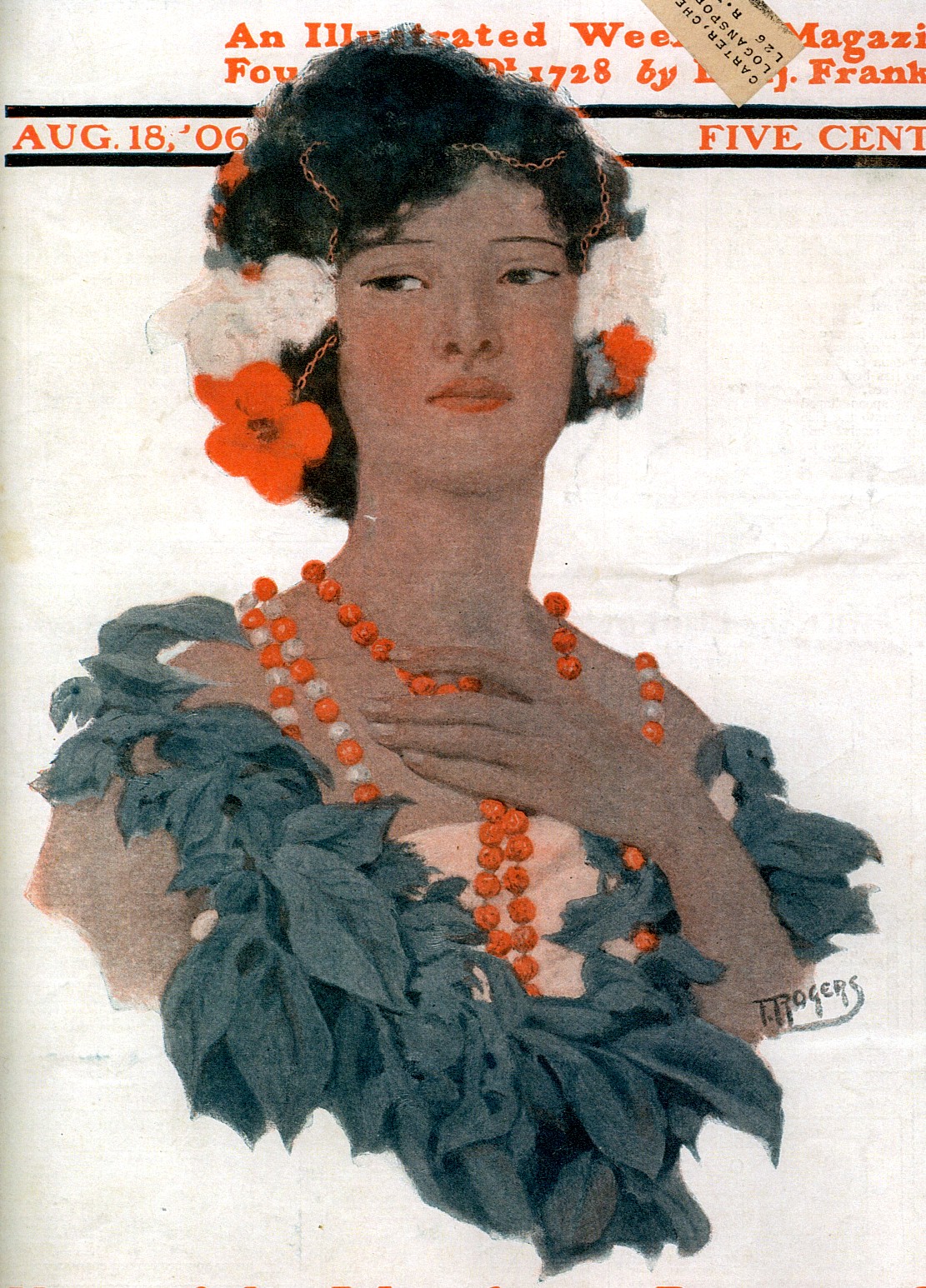 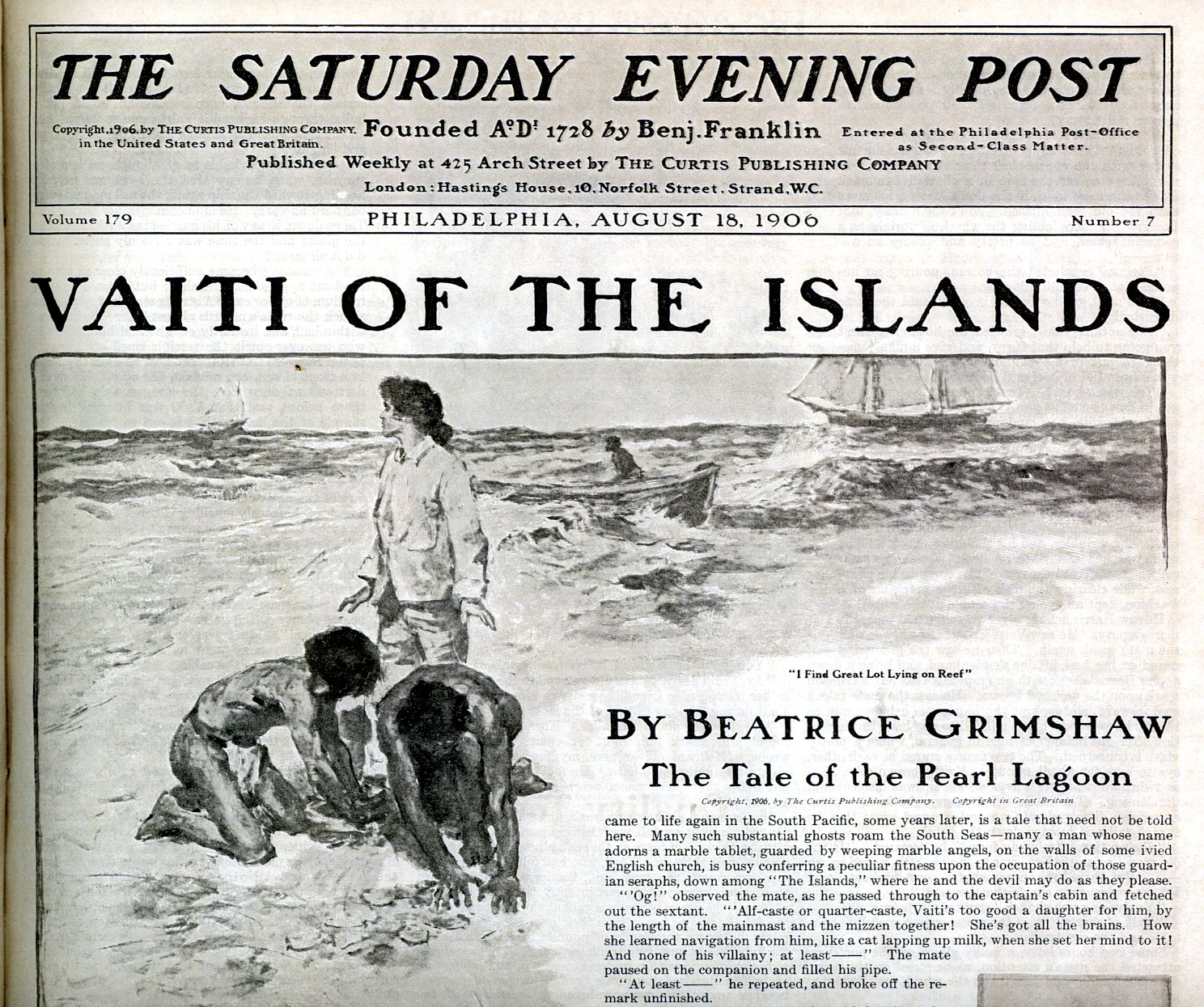 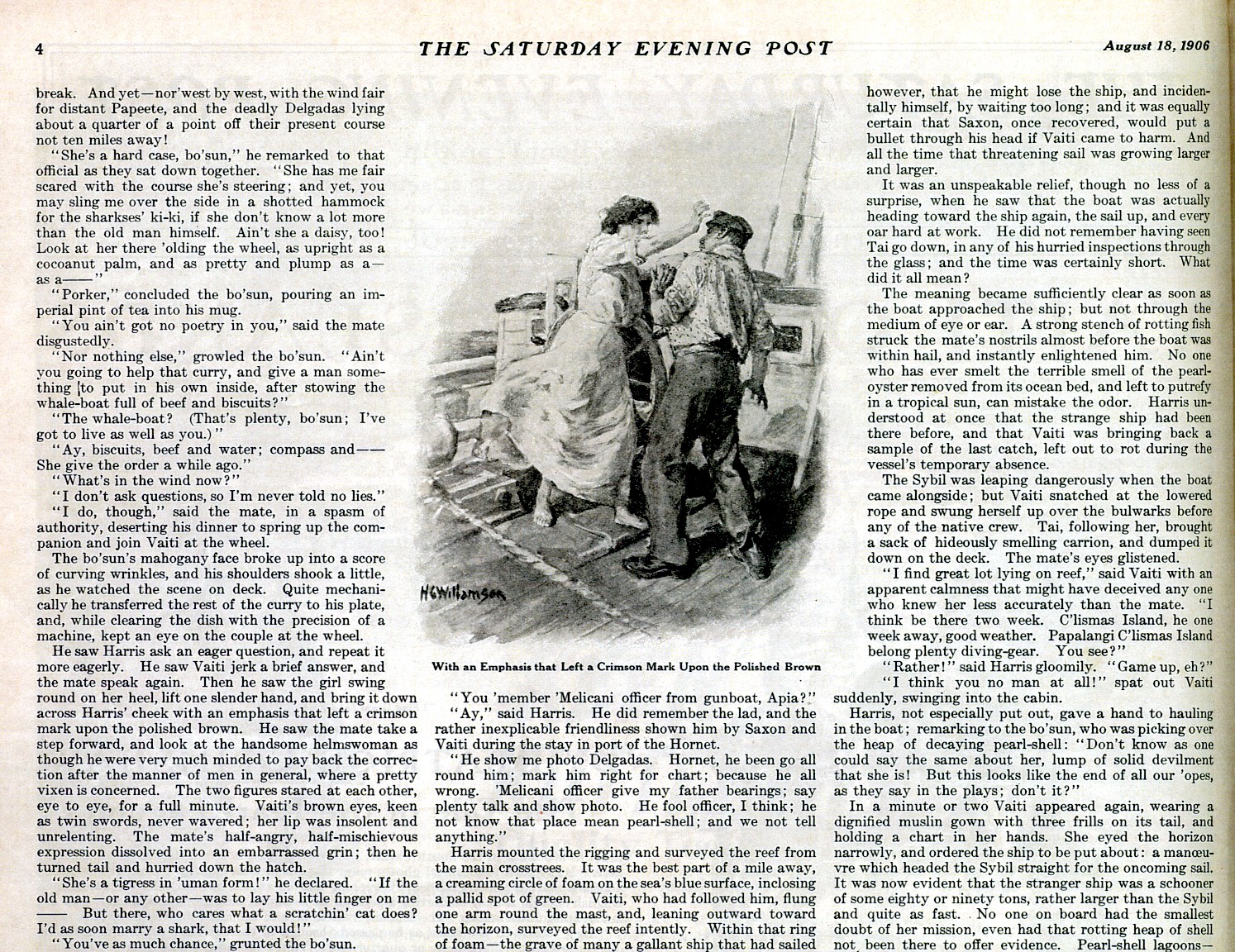 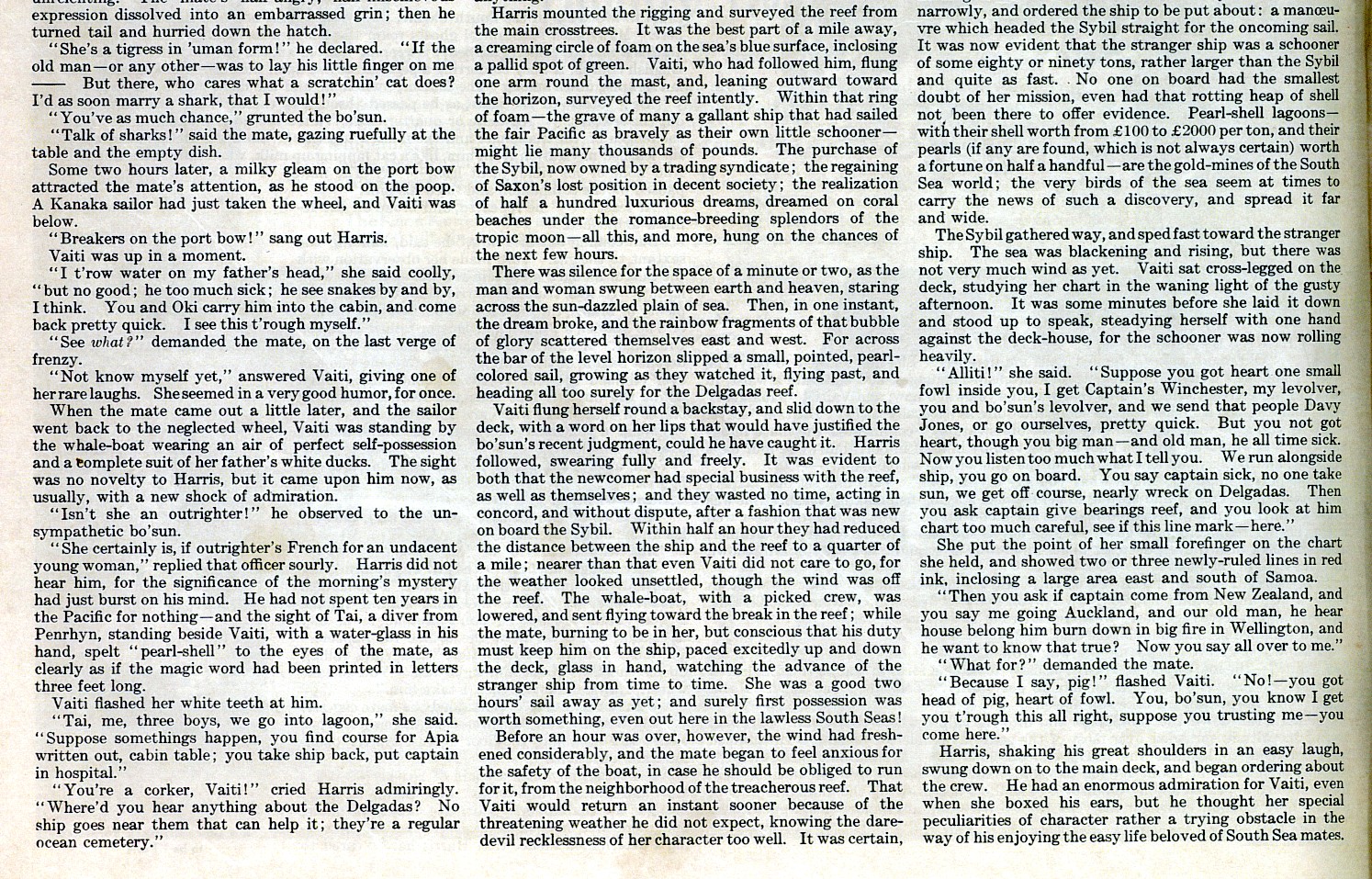 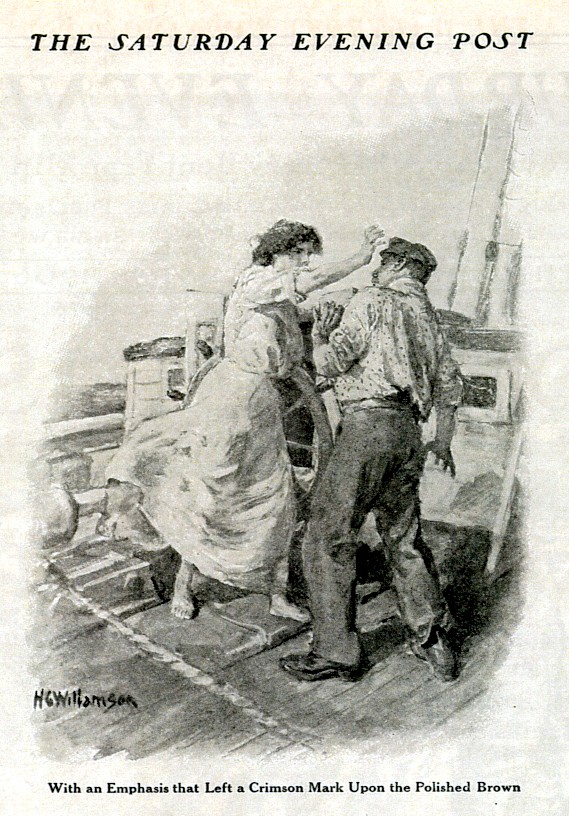 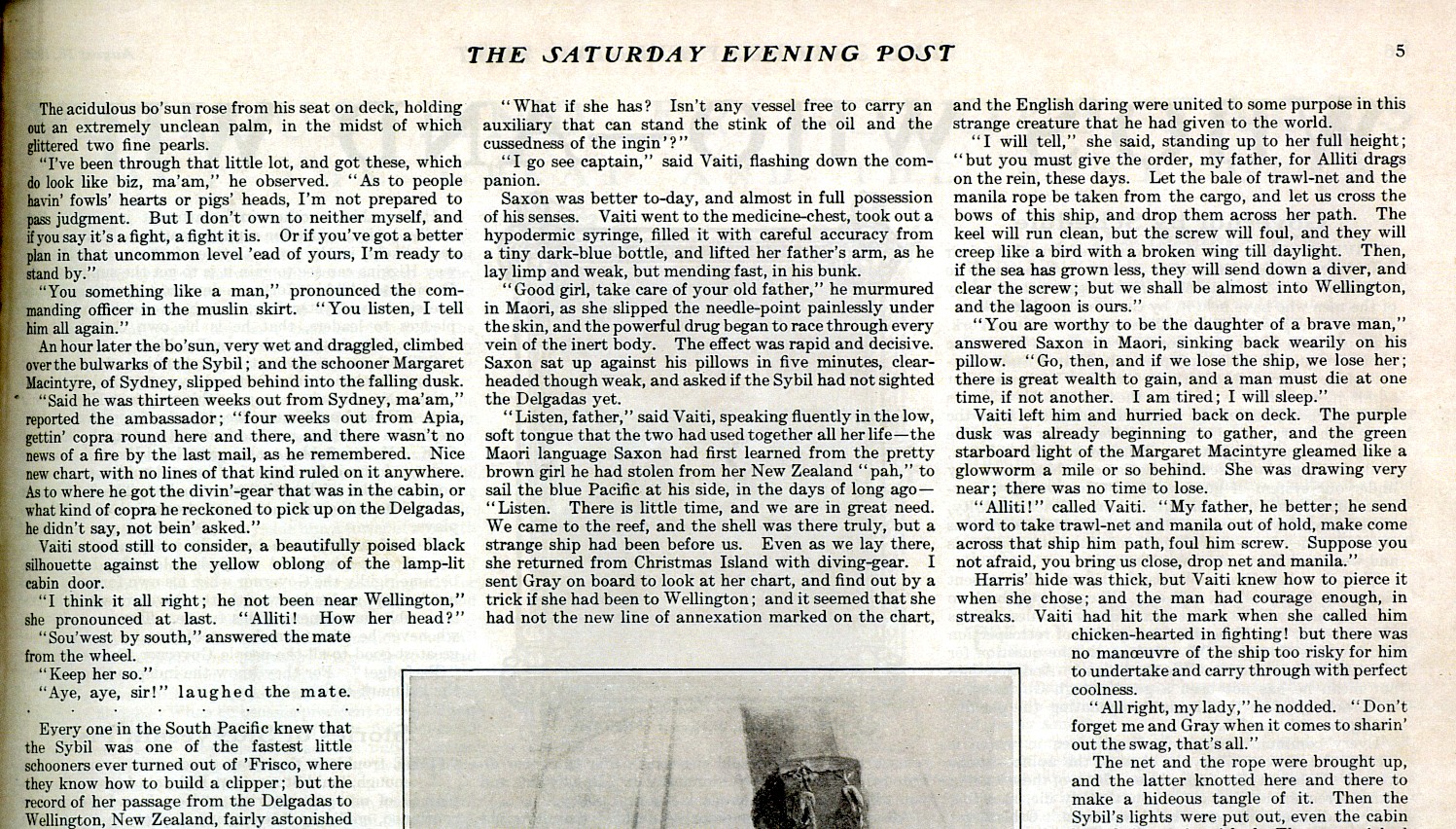 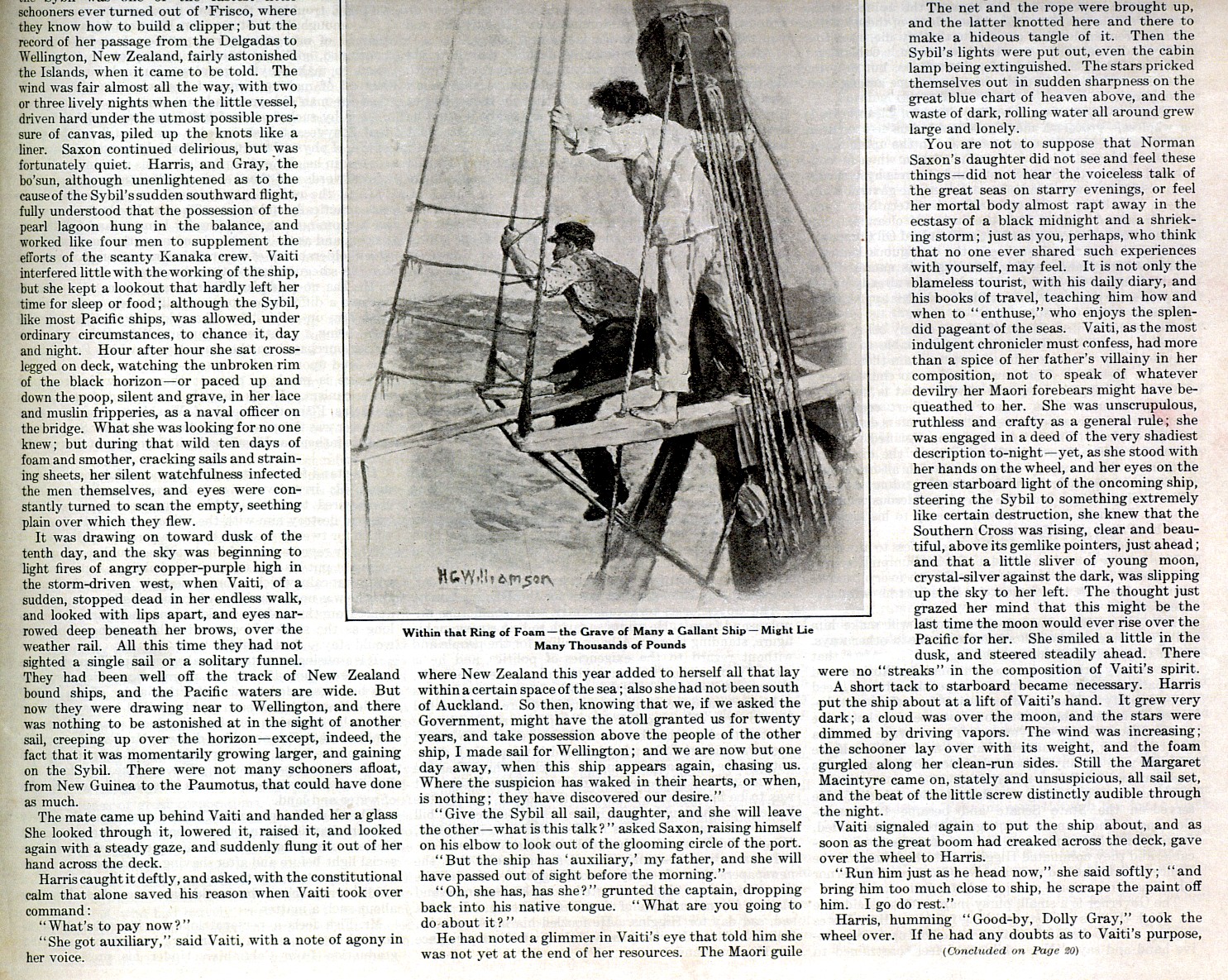 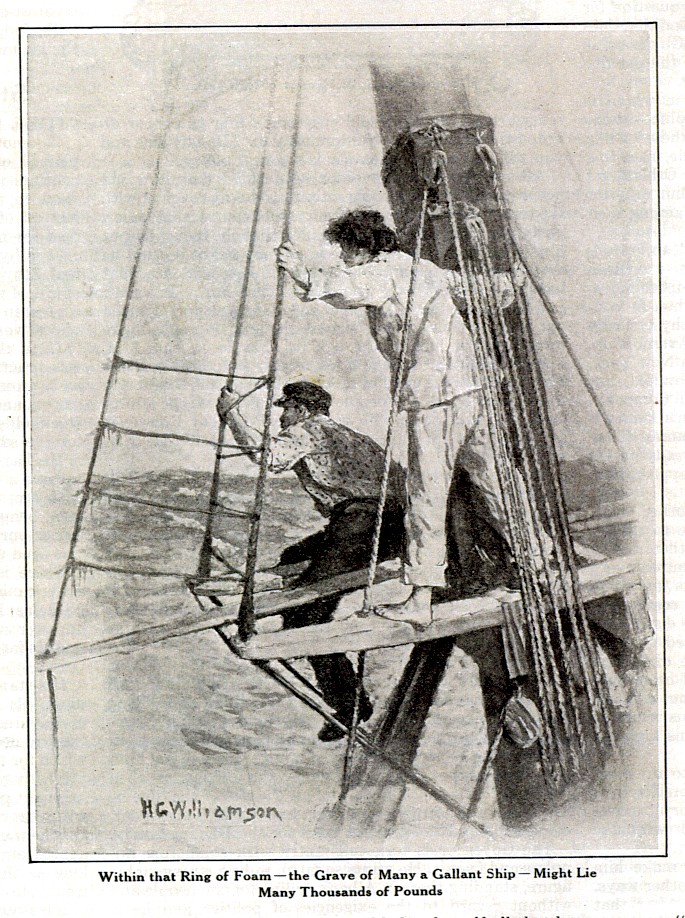 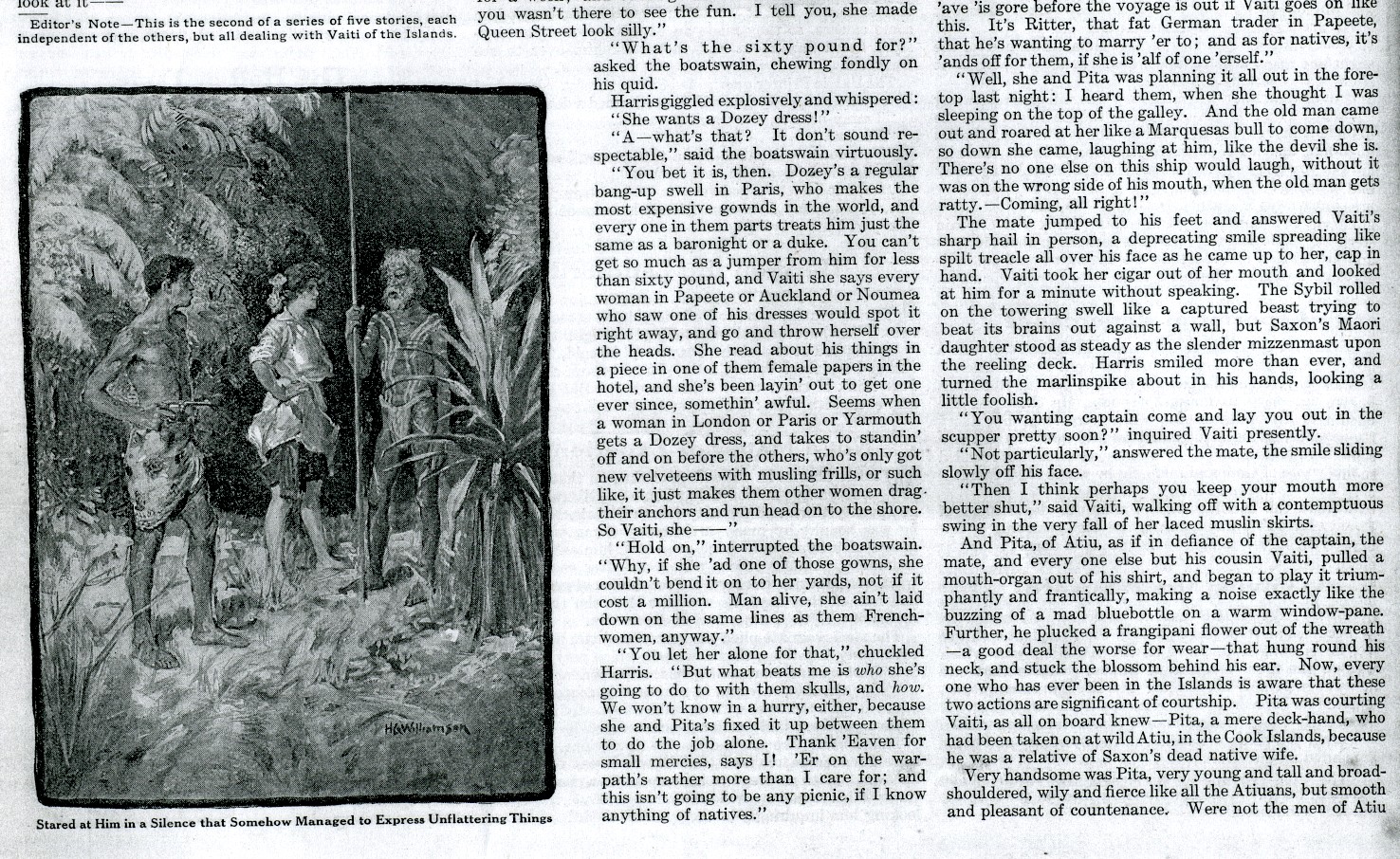 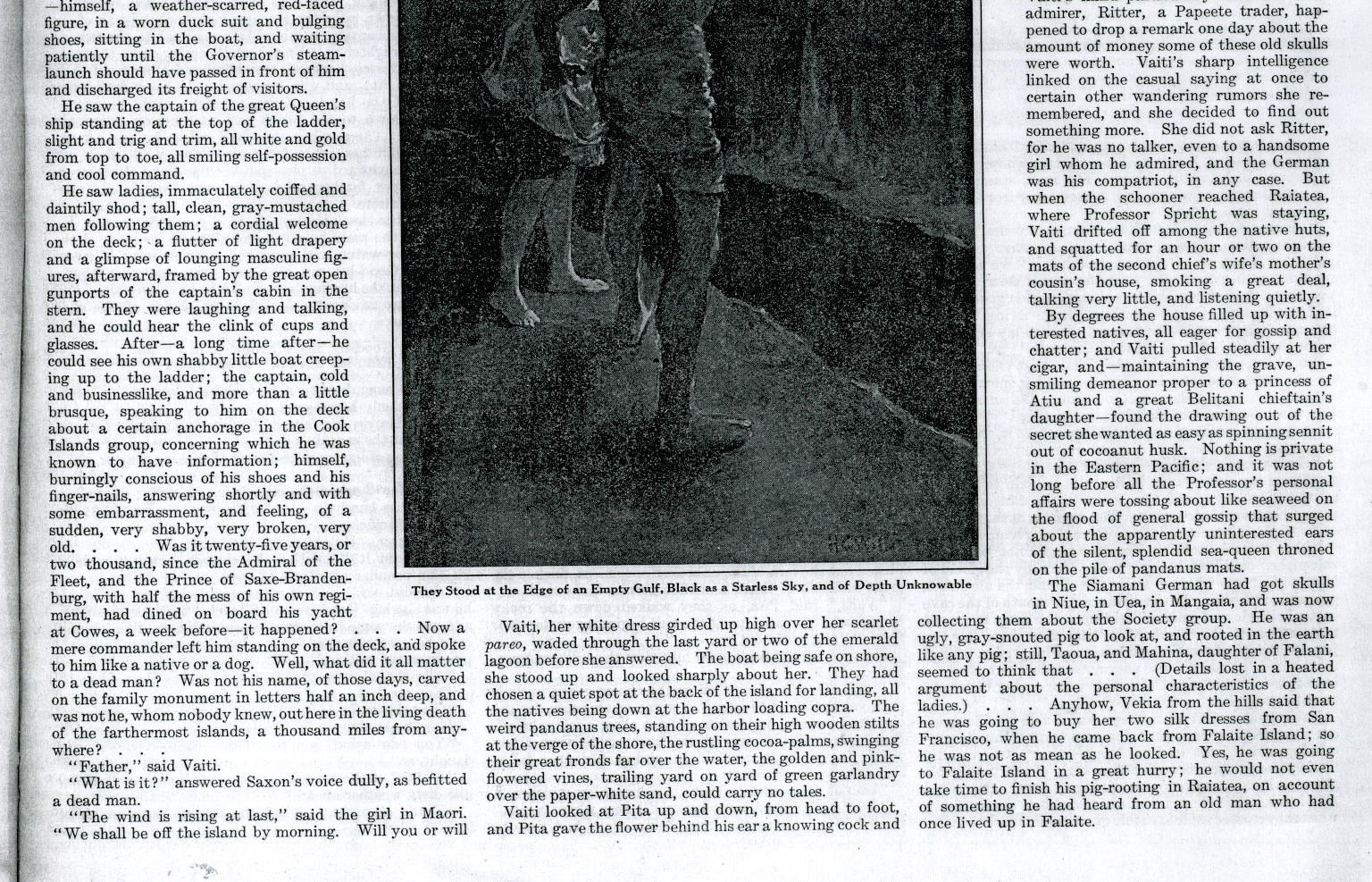 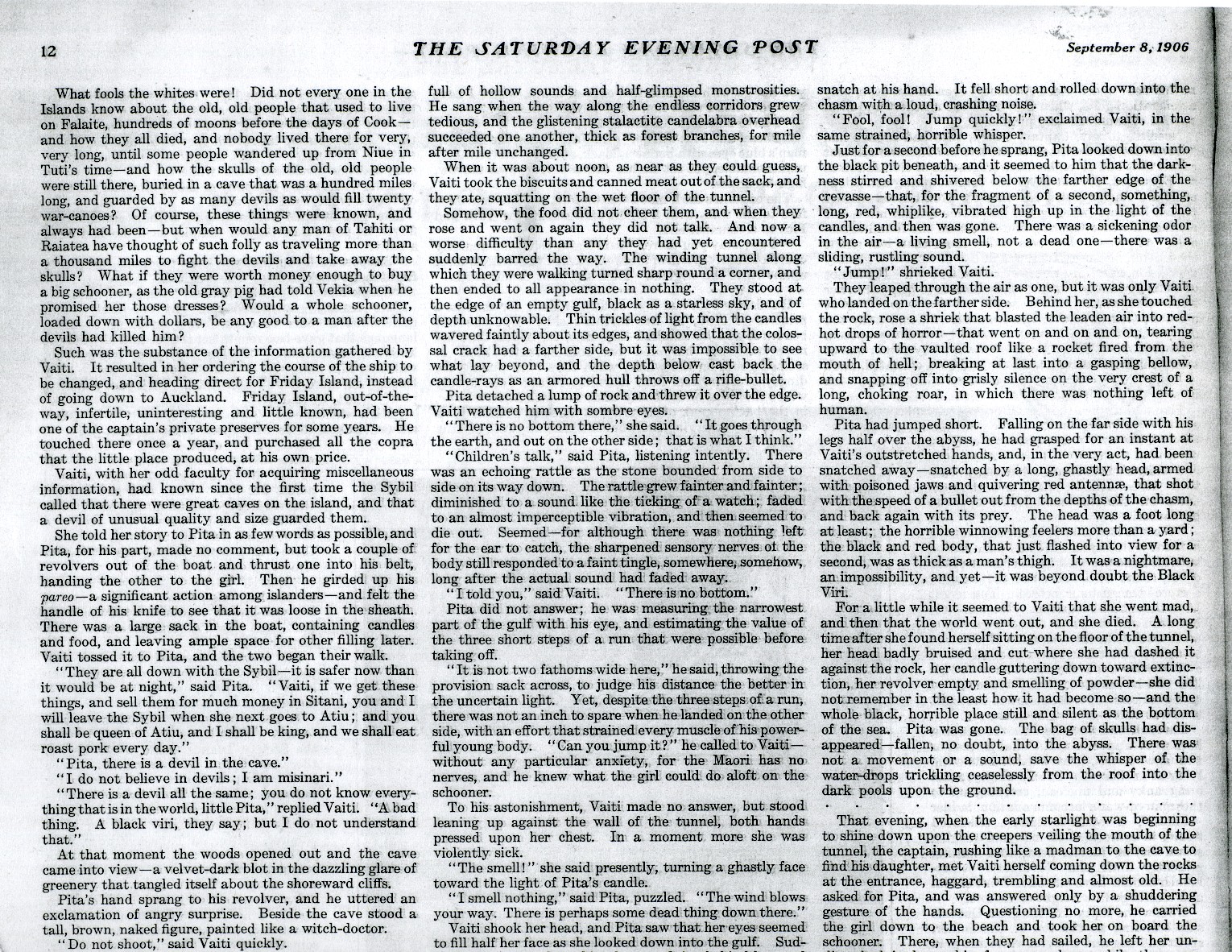 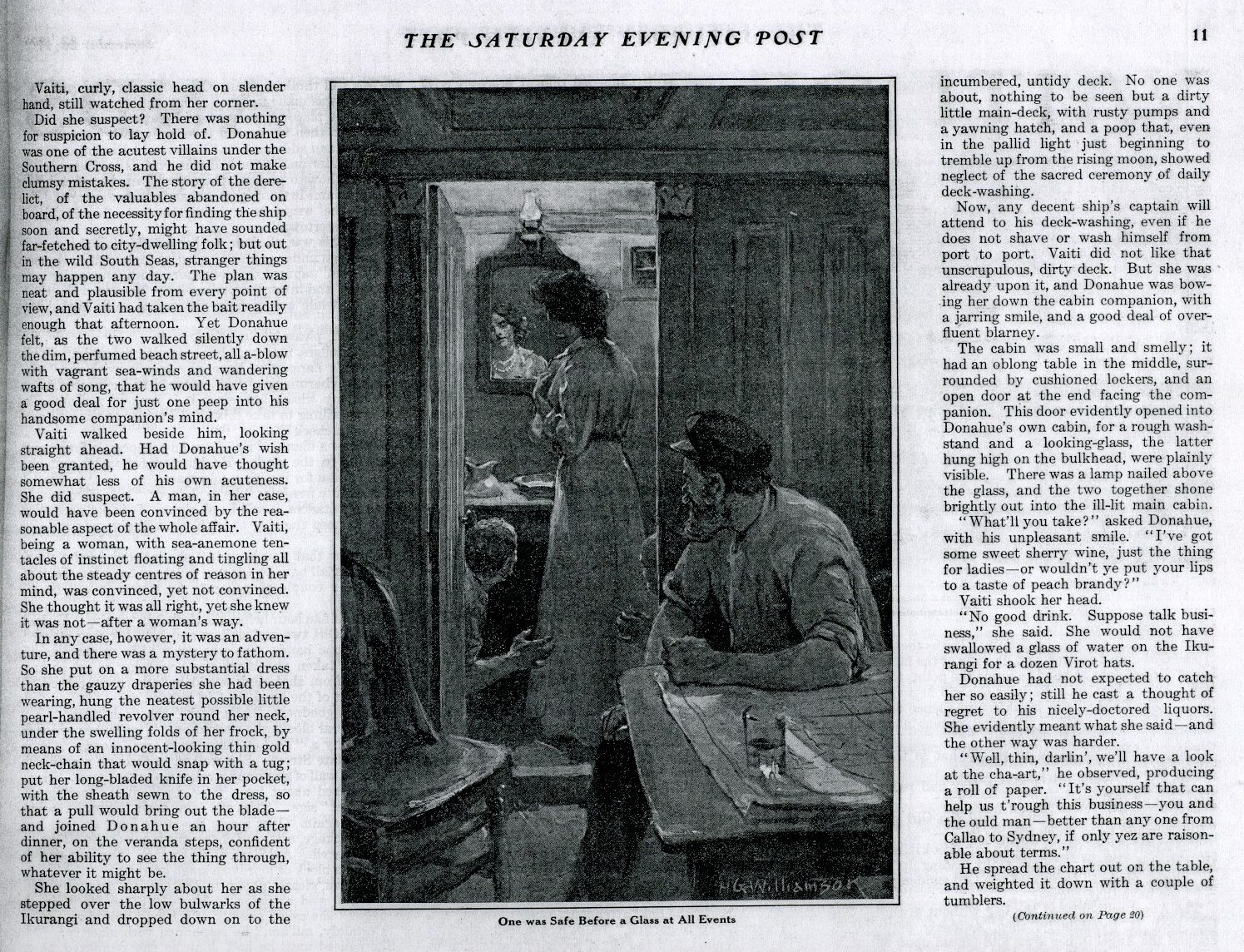 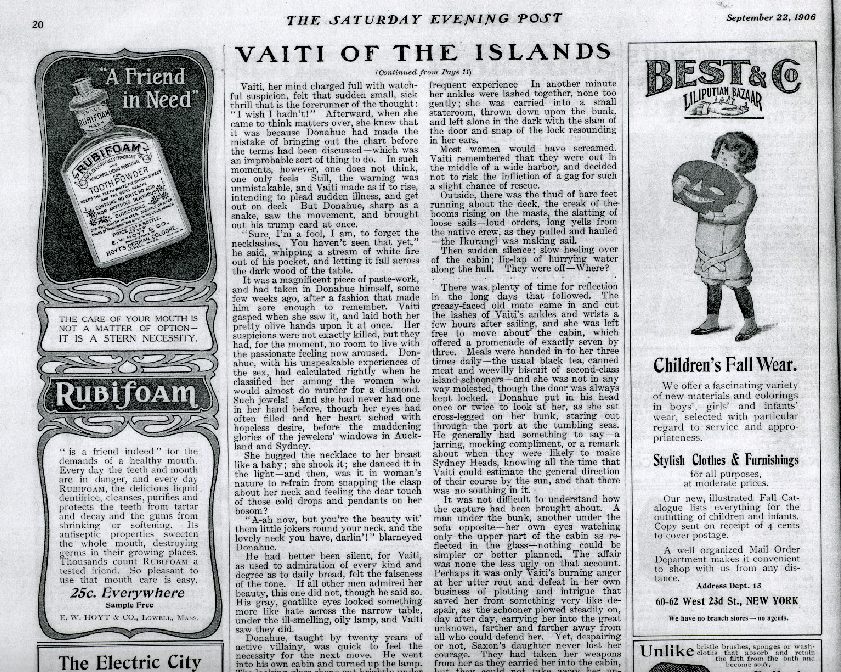 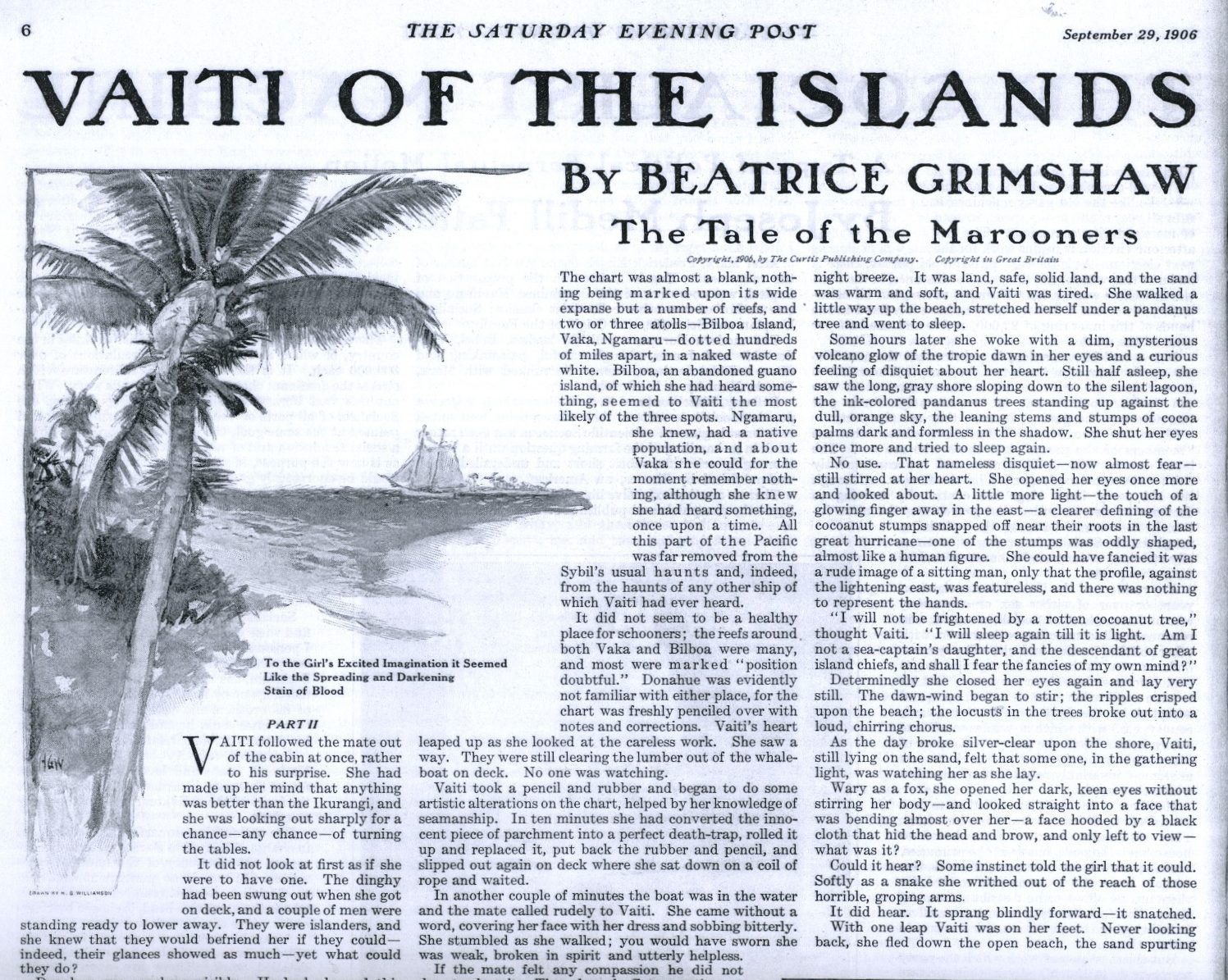 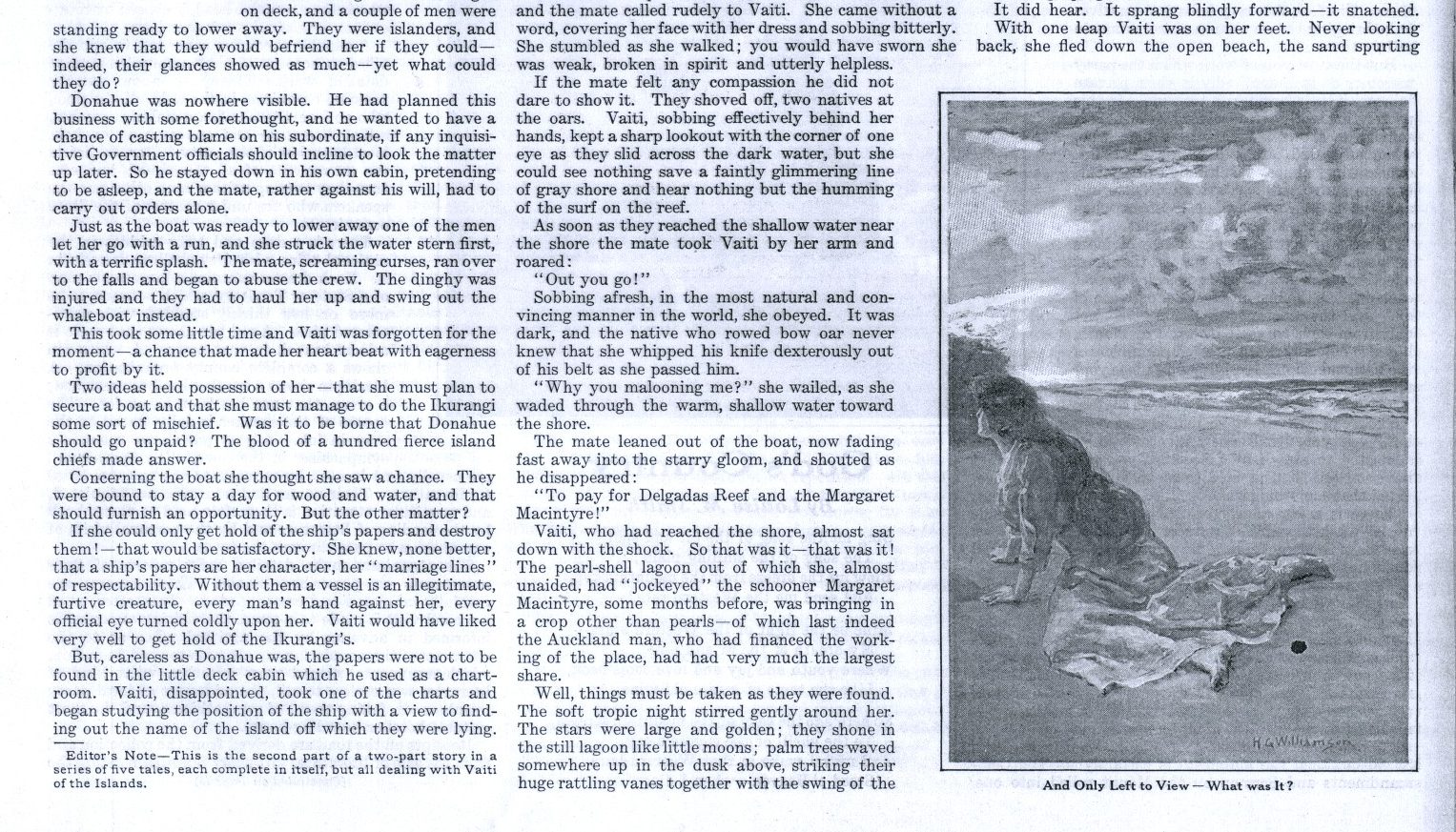 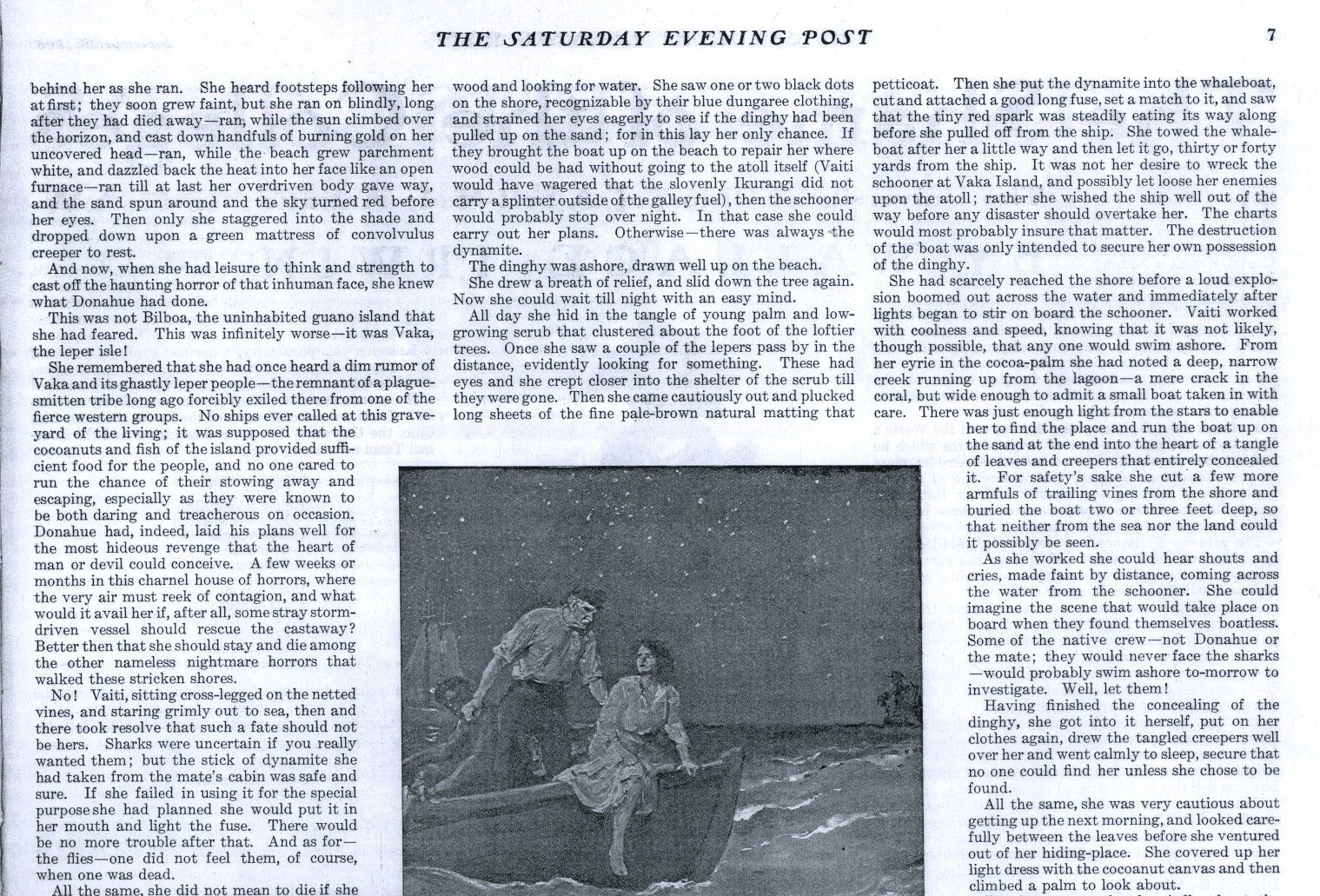 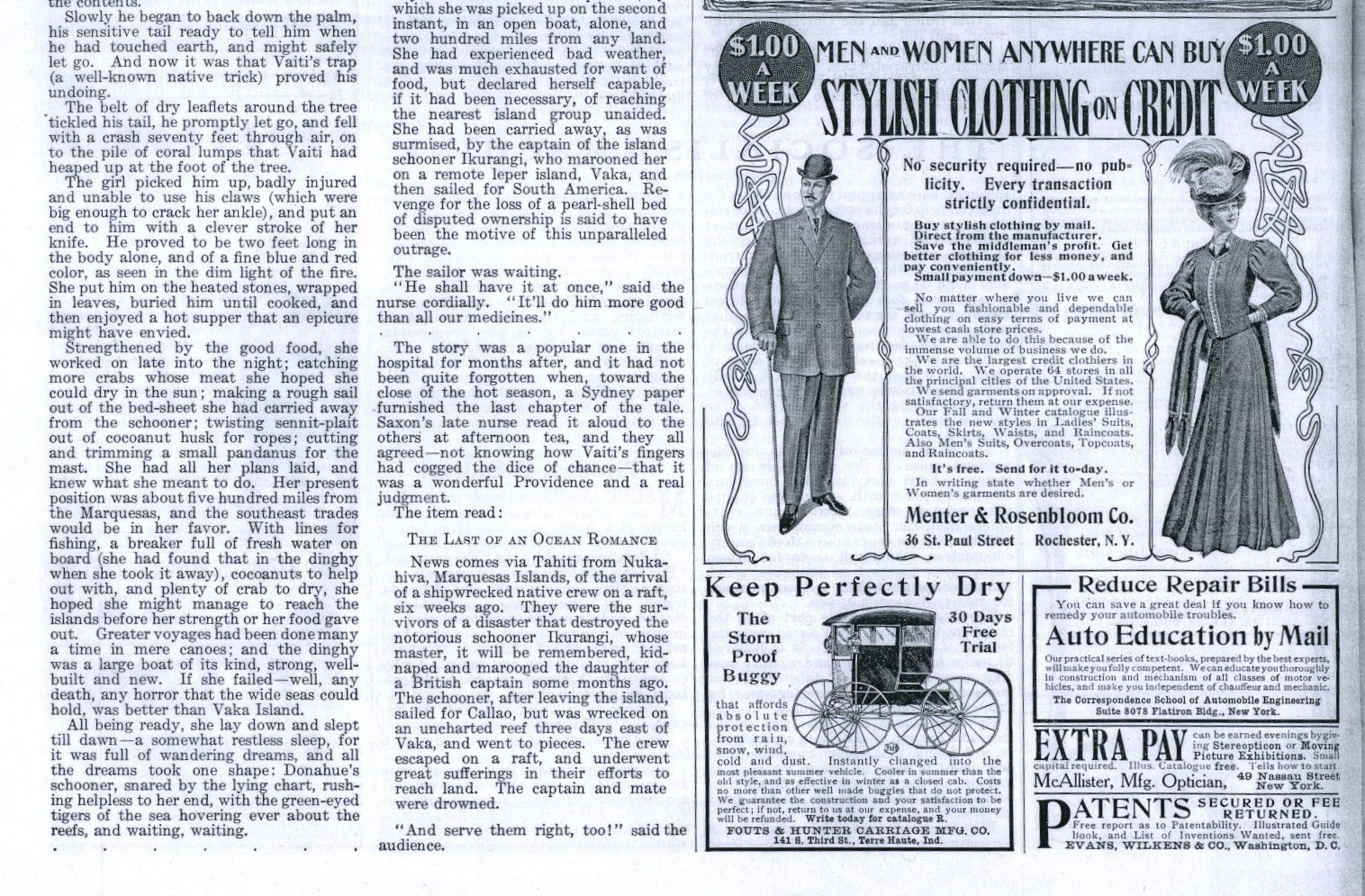 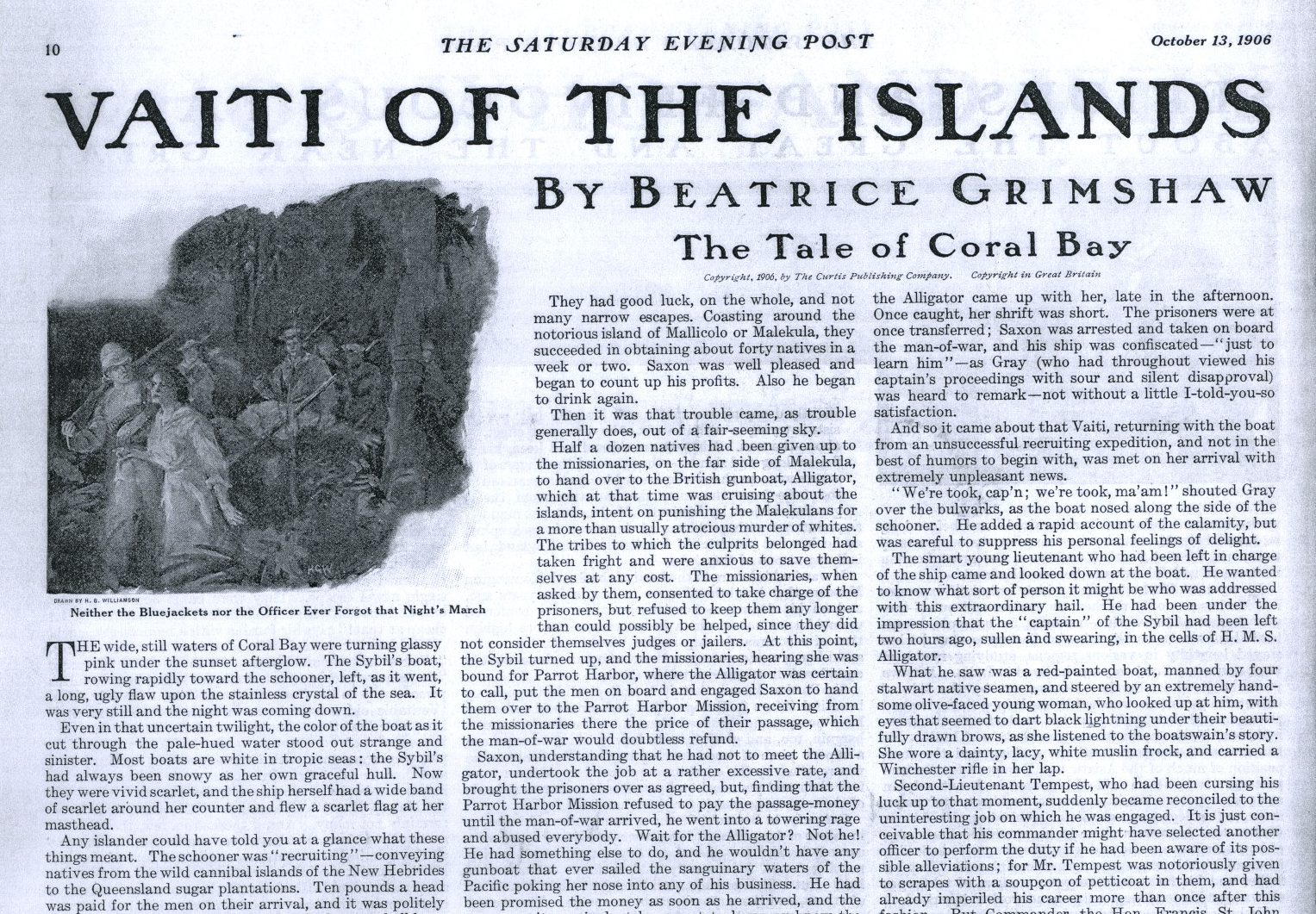 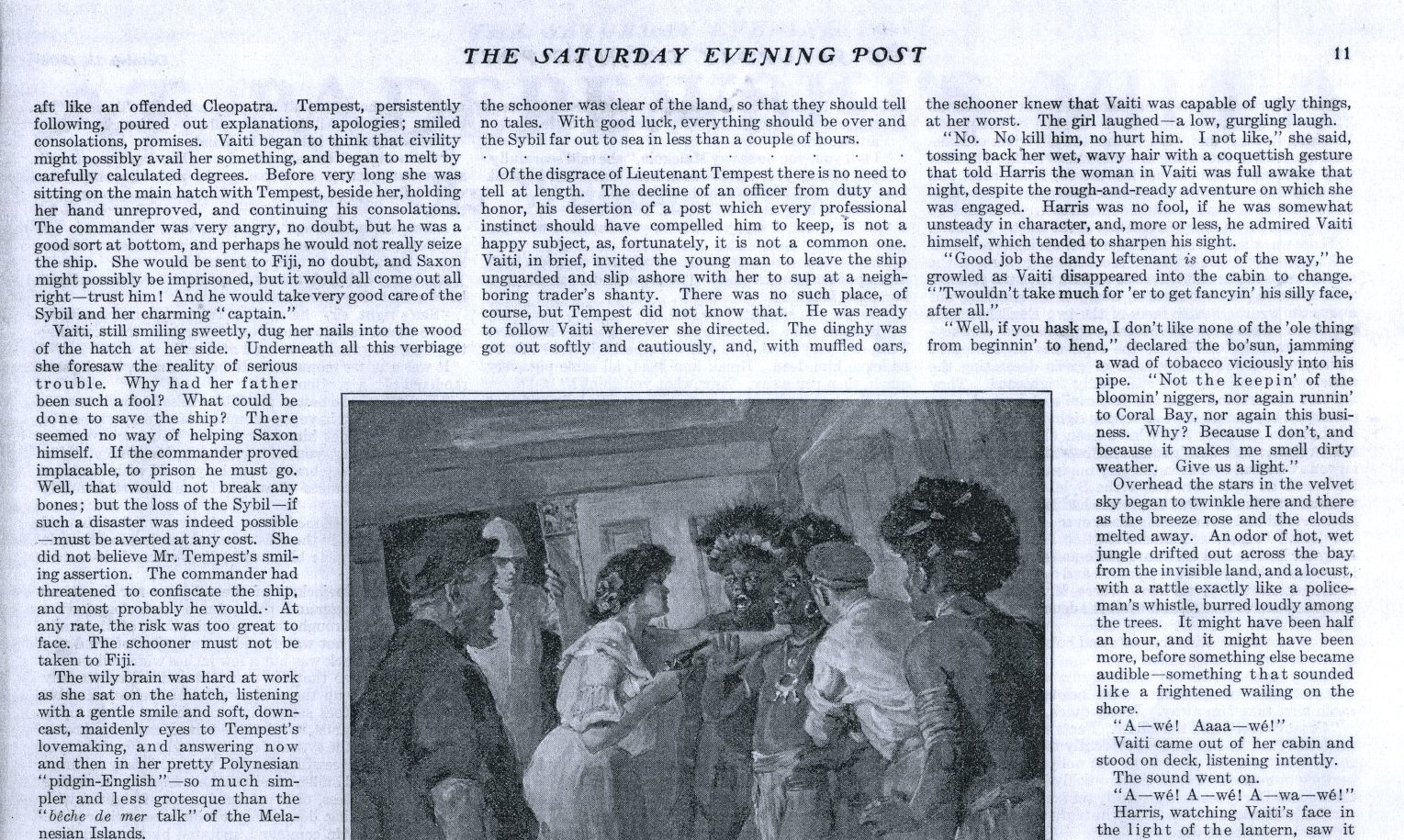 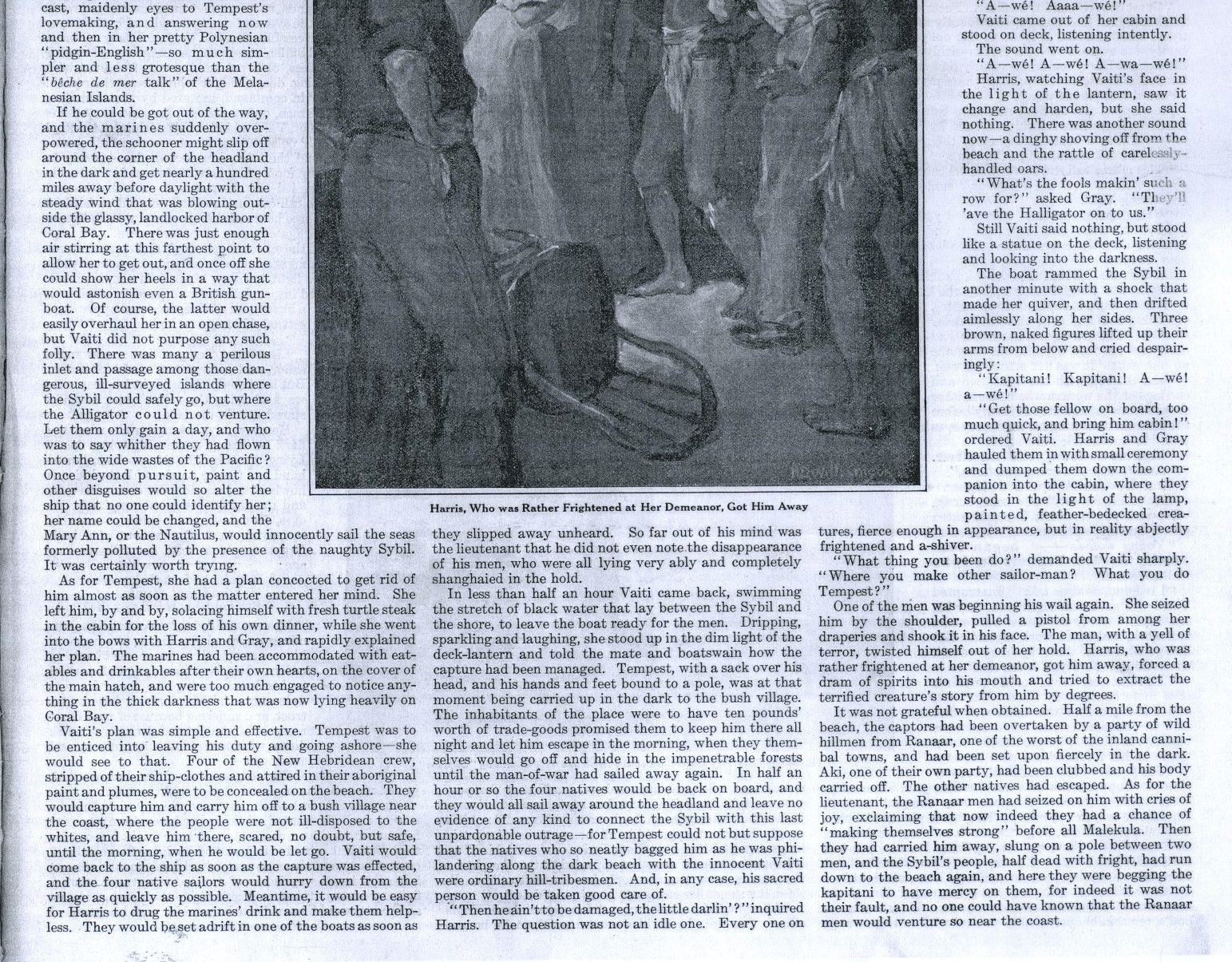 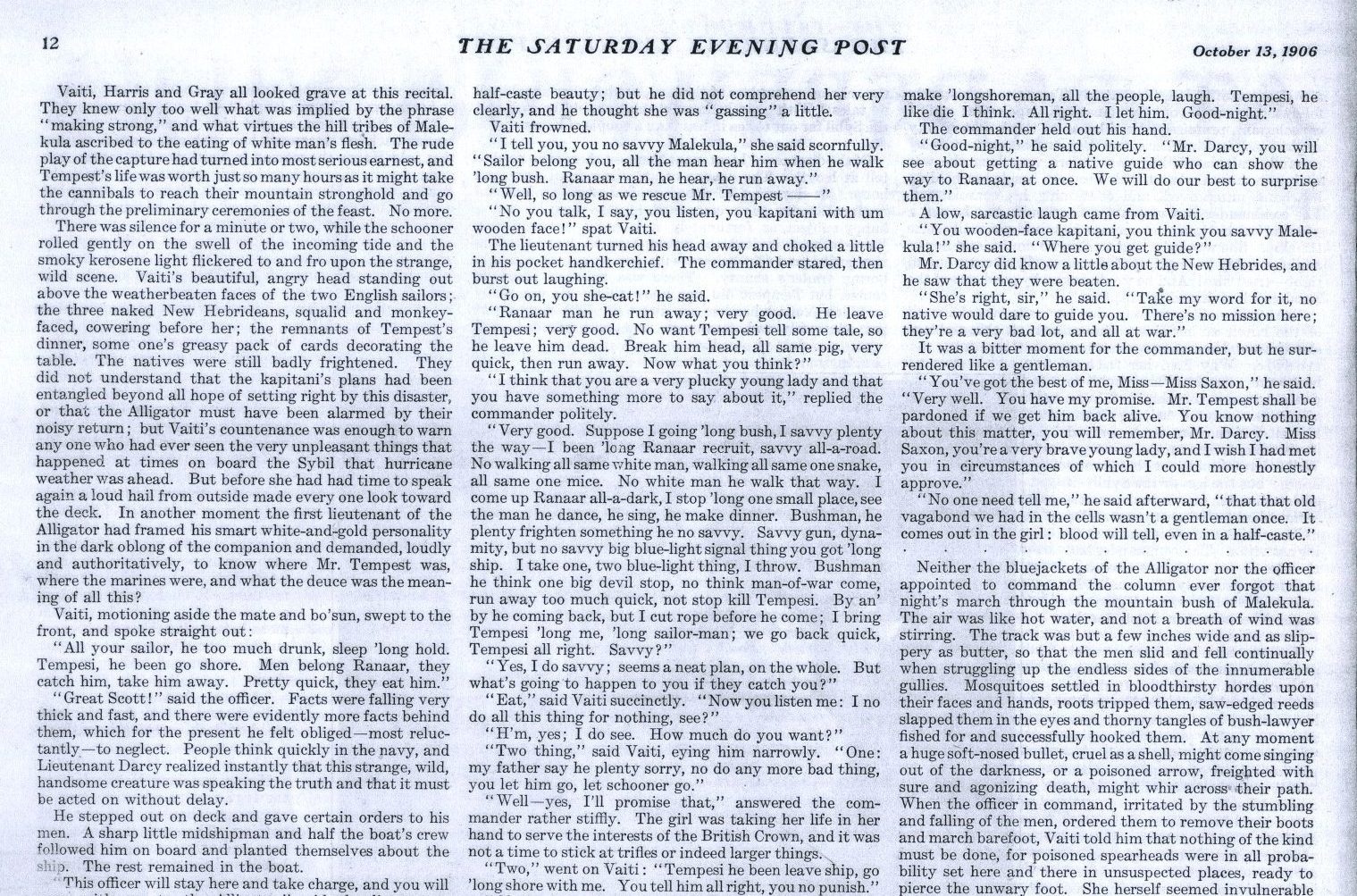 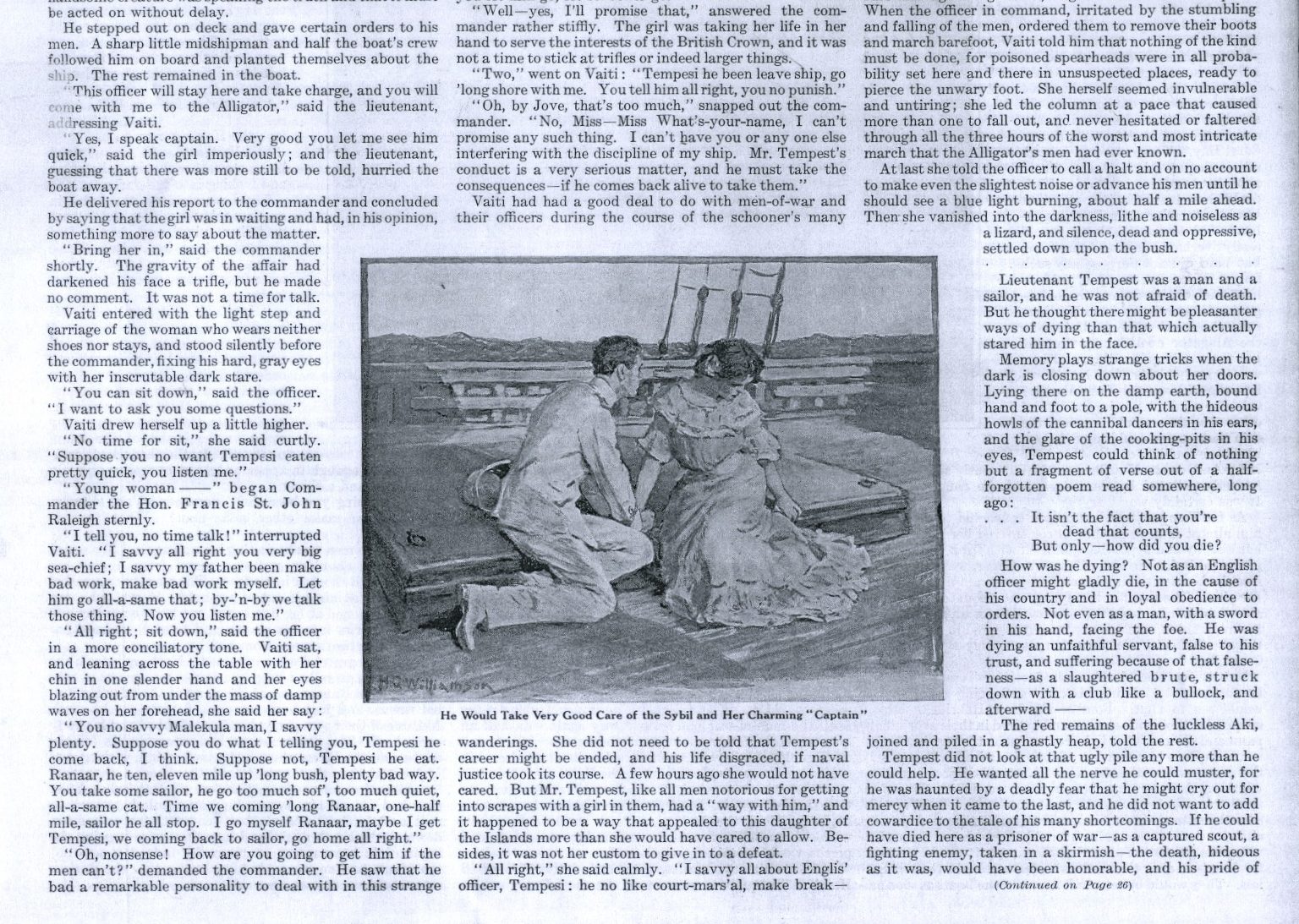 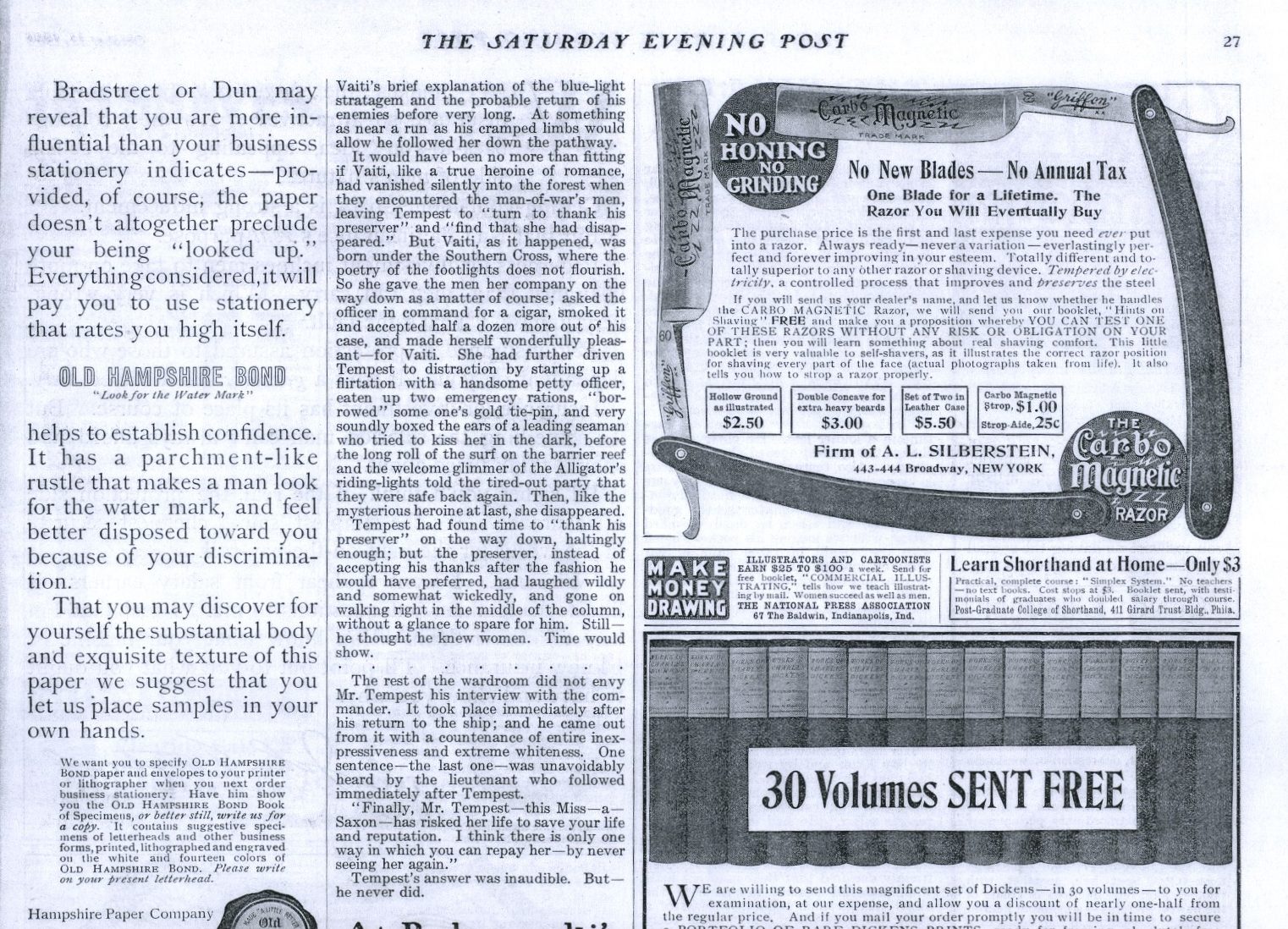 The Book “Vaiti of the Islands” by Beatrice Grimshaw

Beatrice Grimshaw published her book Vaiti of the Islands1 in same timeframe as the publication of the articles in The Saturday
Evening Post. The book shown below indicates two copyright dates — 1906 and 1908. The image of Vaiti on the cover of the book differs substantially from the image appearing in the cover story of the The Saturday Evening Post, which captures more of a Polynesian appearance one would expect for Vaiti.

The entire book is available from Google Books and can be viewed by clicking here. Unfortunately, the illustrations do not show up in this version.

The same artist prepared the images in the book and in the magazine – H.G. Williamson (not H.C. Williamson as indicated in the front matter of the book). All four images in the book were used in the magazine articles, but the figure captions
were changed from the book to the magazine. An additional 16 images were prepared by Williamson for the articles appearing in 1906. The image of Vaiti on the cover of the book was by another artist apparently with the initials “W.H.”; the artist for the cover of the first The Saturday Evening Post article was T. Rogers.

The first article, “The Tale of the Pearl Lagoon”, covers Chapters 1, 2 and most of 3 of the book. The Prologue of the book, included below, does not appear in the Post articles. 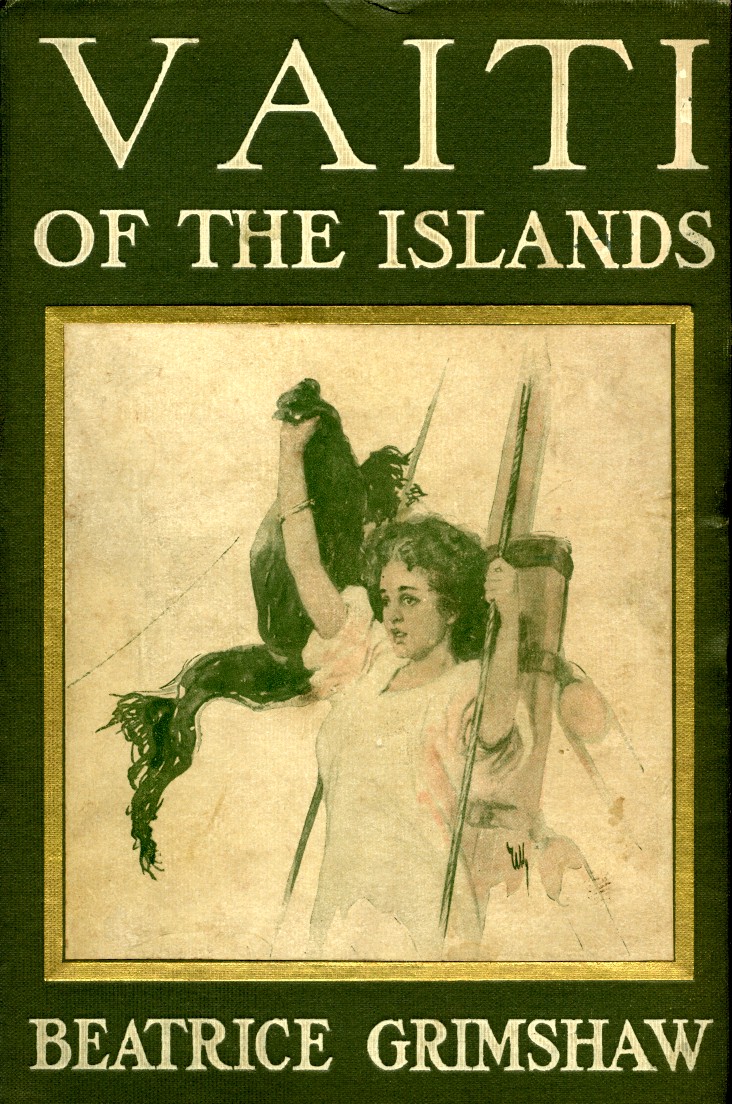 Title Page (Note: The artist should be H.G. Williamson, not H.C. Williamson.) 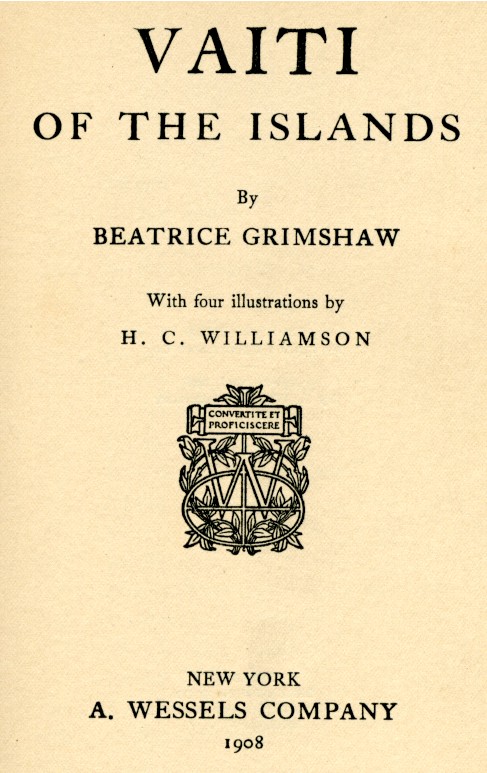 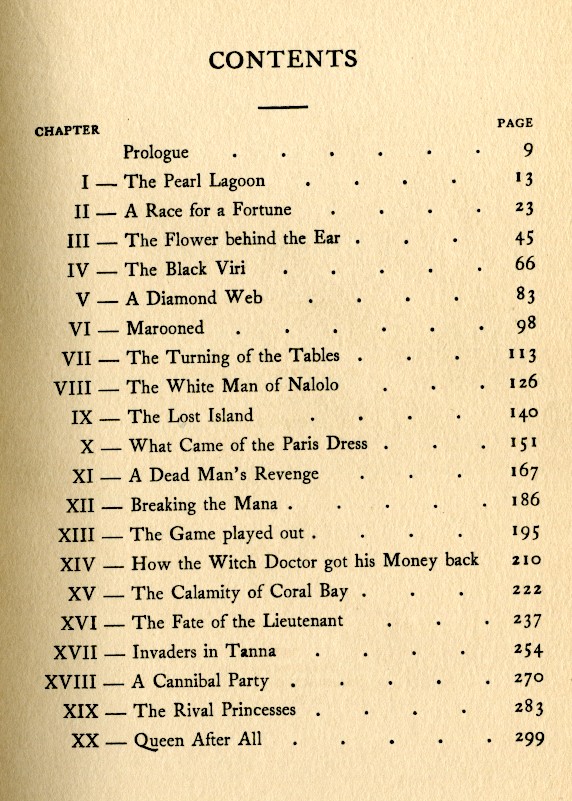 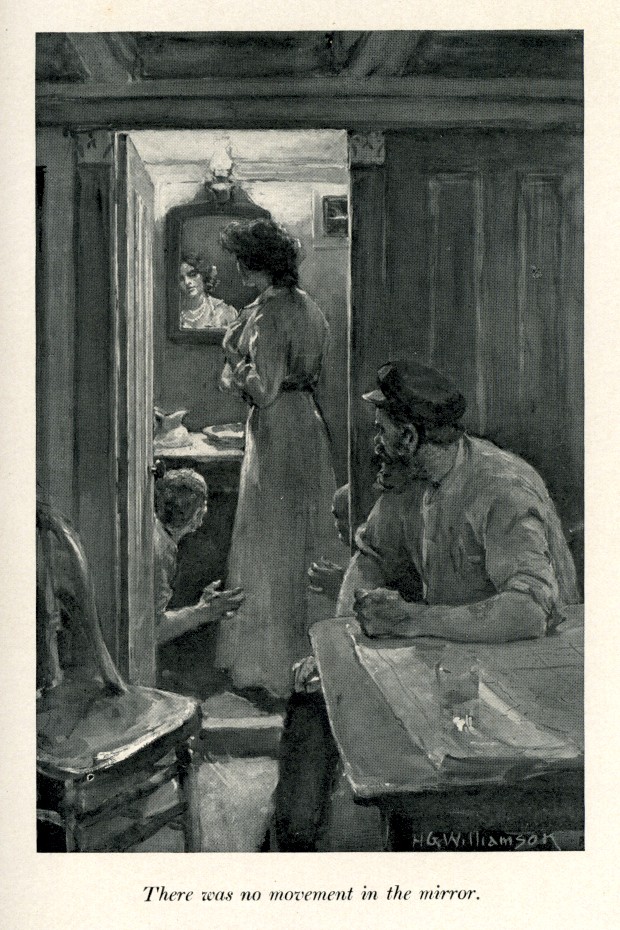 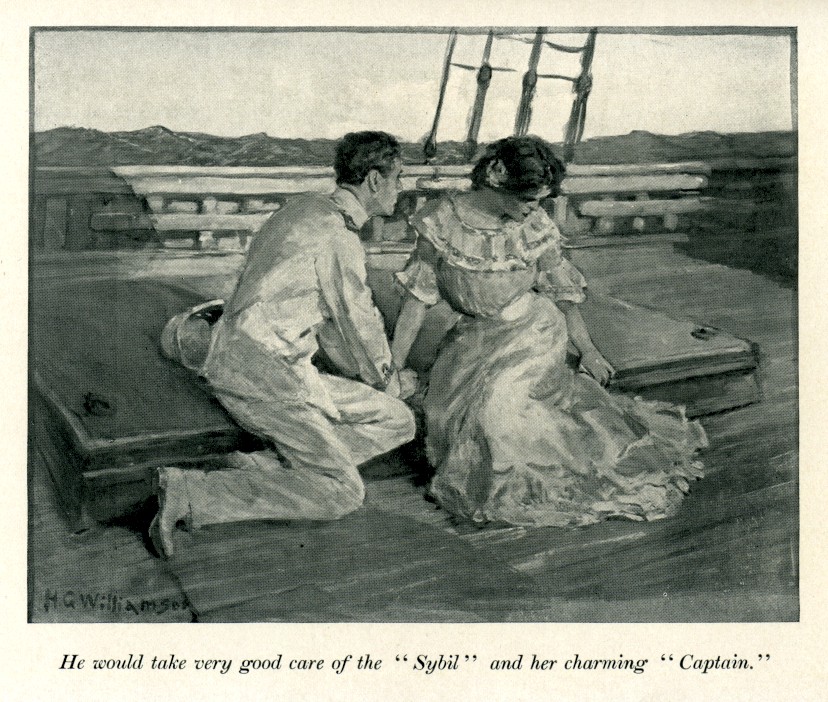 It was in the seventies, long ago.

Summer – yet a slow gray dawn, lingering long in the sky. August – yet a chilly morning, crisping the land-locked waters of the bay with cold knife-edges of foam. Out at sea, the wild white horses plunging madly under the whip of the sunrise wind; the bar beginning to thunder. Inshore, beneath the green slope of the castle hill, small angry ripples beating and fretting the untrampled sand. Dead rose-leaves from the gardens floating among the sea-weed; a torn bird’s nest, flung down by the wind, lying on the edge of the steep cliff pathway. . . . It was still the time of summer, yet, too surely, autumn had come.

The sodden leaves lay thick in the bottom of the boat when the man seized it by the gunwale, and ran it down the beach into the snatching waves. . . . Oh, an autumn day indeed, here in wild Caithness, though summer was still at its fairest in kinder lands. And in the heart of the man who was rowing fast through the angry dawn light, to the tall schooner yacht -that swung and tore at her moorings out in the bay, there was autumn too, with winter close at hand.

All so long ago! who remembers?

Not the newspapers who, in a day or two after, shrieked the scandal broadcast, east and west. Not the guests of the castle house-party – they are dead, or old, which is half of death, since then. Not the Prince whose dignity had been insulted by the outbreak of a vulgar card scandal, in his very presence – he struck the titled owner of the house of the list of his intimates forthwith, and then forgot about it, and him. Not the colonel of the famous regiment, who found out defalcations in the funds belonging to the mesa, a few days after, and knew why his most promising young officer had done the unforgivable, thing–for the Ashanti spears ended life and memory for him, out on the African plains, before even Piccadilly had made an end of talking. Not the Royal Yacht Squadron the reported loss of the famous “Paquita” at sea, with her disgraced owner on board, is a tale that even the oldest habitué of Cowes could not tell you to-day: . . . No one remembers. When the beautiful white schooner spread her wings below the castle wall, and beat her way like a frightened butterfly out to the stormy sea, she sailed away into silence, and she and hers were known no more.

Yet, but for that stormy day in the Highlands, and the boat that fled to sea, this tale of far-off lands had never been told.

Webpage posted January 2008. Updated November 2008 with link to the complete book, “Vaiti of the Islands”.