The Complete Banjo Works of Emile Grimshaw, by David Price 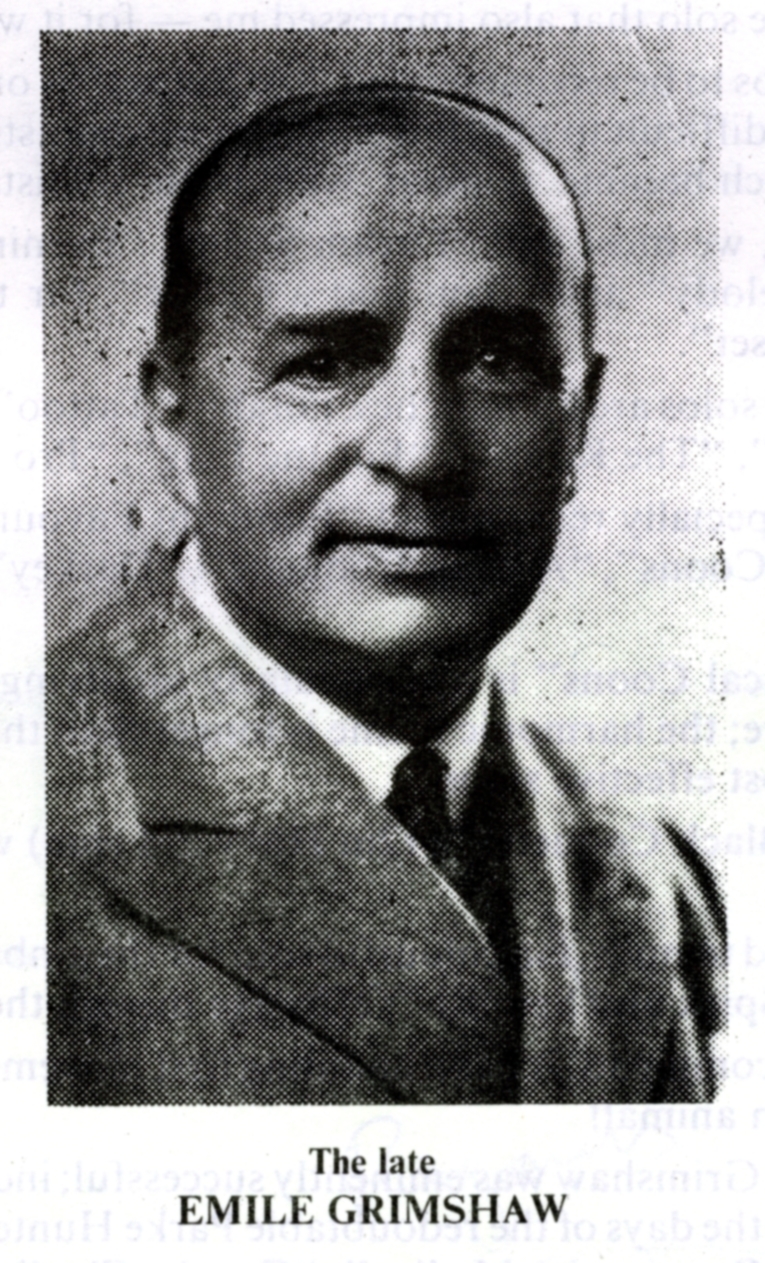 David Price has collected the complete banjo works of Emile Grimshaw under one cover; this publication. A total of 71 songs are included in this work. Those wishing to order this book from Mr. Price are encouraged to contact him at: dvprice@tiscali.co.uk or visit www.jazzbanduk.com.

Thanks go to David Wade for obtaining this publication on behalf of the author under an exchange arrangement. Enjoy the t-shirts and cap, David!

The cover of “The Complete Banjo Works of Emile Grimshaw” is shown below. 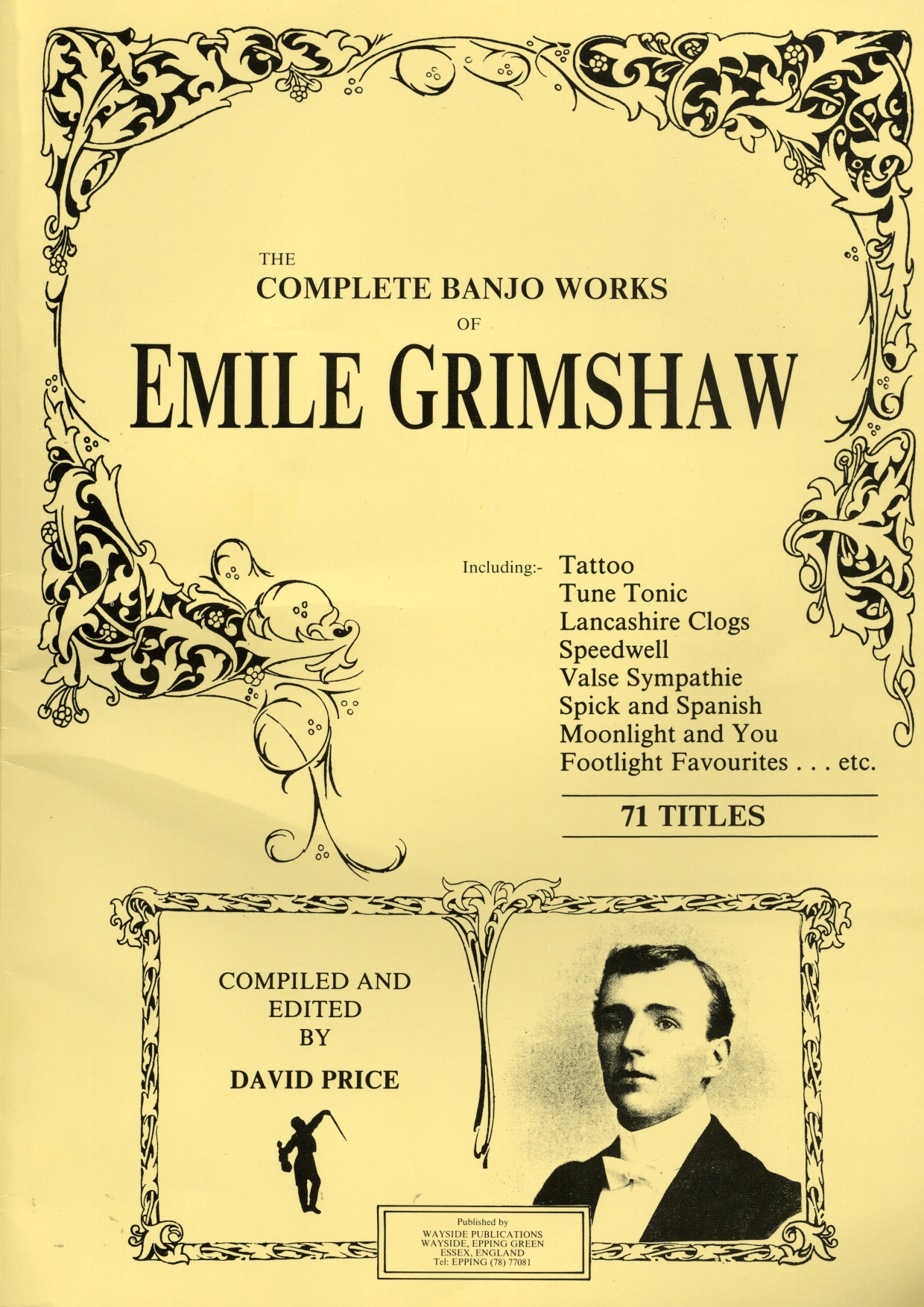 The foreword to the songbook is provided below.

Emile Grimshaw was a “player of exquisite taste on banjo, mandolin and guitar” (vide Bernard Sheaffs eulogy). He taught Ivor Mairants, to name one of his most successful pupils. Emile Grimshaw Jnr., of Jack Hylton’s Band was another. His “Lancashire Clogs” was played by military bands all over the U.K., “Tattoo”, however, was his best seller. He edited the BMG Magazine for over 20 years, then set up with his son at 54/55 Piccadilly, to publish his own work and to market a range of fretted instruments, in 1933, if I remember aright. He was cited as “the finest domra player” in Britain in the days of the Clifford Essex Balalaika Orchestra. He was the banjoist (plectrum-style) in The Savoy Quartet (1916) and The Rag Pickers, of the same period. He toured “the Halls” with his wife as The Vekeys, and as Emil and Ediss – circa 1914-16 played plectrum banjo duets, as well as finger-style, I understand. His Quartet appeared in Cochran’s Revue, Wake Up and Dream, as their Decca labels show; this was circa 1929; I think the HMV discs were released in 1928. Four of Emile Grimshaw’s best pupils formed his second Quartet. Led by Marjorie Brightwell (Stella Scott), they were the only all-girl banjo quartet in Britain or anywhere else for all we are aware ……… and they were very good. The section on Syncopation in The Banjo & How To Play It is the finest coverage of the subject in any finger-style book. Likewise, How To Improvise On The Banjo, in his plectrum method, is a masterly expose of the subject.

Grimshaw’s work for the banjo is as well known as that of Morley or Cammeyer – to name the two most famed on this side of the Atlantic.

Emile Grimshaw seemingly inherited Ellis’s faculty for writing good solos that were relatively easy to play and “lay under the fingers” – as good solos should. The ability to write such solos is rare – but Grimshaw shared this ability with Ellis and the result was a number of appealing banjo solos that pleased players and non-players alike.

Of the first four banjo solos I heard, three were by Grimshaw – and this was long before I began to play the instrument. Indeed, I well recall the impression made on me by Olly Oakley’s brilliant recording of “A Dusky Dandy” (backed by Lansing’s famous “Darkey’s Awakening”) in my early `teens.

“Fooling the Frets” was another fine solo that also impressed me – for it was the first solo I ever heard “live”. There are many more Grimshaw solos to be recommended. “At Sunset” is one of his melodius pieces. As its title implies, it is a reverie- and it is not difficult to play but a little more sophisticated than “Moonlight and You”, another romantic composition which became popular with both soloists and B. M. & G. orchestras.

If we “group” the Grimshaw solos, we must add “Dream Song”, “Evening Reverie”, “Pierrot’s Serenade”. “Stars are Shining”, “Twilight Melody” and “You and a Canoe”, for these are all of the same genre as “Moonlight and You” and “At Sunset”.

Some of Grimshaw’s most successful solos are his marches, notably “Tattoo” (his biggest “best seller”), “Beat as You Go”, “Return of the Regiment”, “The Kilties”, “For the Flag”, “Pro Patria” and “Banjoliers”.

The harmonic, movement in “Comical Coons” is a particularly satisfying one for the moderately-advanced student, being both easy and effective; the harmonic theme is longer than those in “Black Coquette” or “Celtic Morn” – both of which are still most effective solos.

Oakley made a fine recording of “Black Coquette” (l2in HMV. 78 rpm) which is worth searching for in the second-hand marts.

“A Spanish Romance”, with its varied tempos, is a colourful solo for the ambitious student. It is certainly a better finger-style solo than the popular “Spick and Spanish”; effective though the latter is in “atmosphere”.

“Valse Sympathie”, I particularly recommend. It has a haunting first movement and is well within the abilities of the average player, if there is such an animal!

In the matter of arrangements, Emile Grimshaw was eminently successful; indeed, many believe him to have been the finest arranger for the banjo since the days of the redoubtable Parke Hunter. Certainly, Grimshaw has a string of successes to his credit, notably: “Community Medley”, “For the Flag”, “Leslie Stuart Medley”, “Musical Memories”, “Martial Moments”, “Nigger Minstrels”, “Operatic Memories”, “Overture Medley (the most successful of all his arrangements), “Pro Patria”, “Rachmaninoff’s Prelude”, “Sailors Don’t Care”, “Scotch Broth”, “Sousa Scrapbook”, “Show Boat”, “Skater’s Waltz”, “Snatches of Song”, “Swanee Sing Song”, “Song of the Volga Boatment” and the brilliant Russian medley called “Vodka”.

There are, of course, many more good solos in the Grimshaw list: “Mister Jollyboy” is another favourite Oakley recorded successfully, along with “Whistling Nig”, “Daddy Long-legs”, “Beat of the Drum” and “Lancashire Clogs”. “Tired Tim” was also beautifully recorded for the Decca label by Jack MacGarvey, shortly after the Emily Grimshaw Quartet had made some excellent discs for that company, viz. “Nigger Minstrels” / “Listen to This”, “Tattoo” / “Happy Go Lucky”, “Banjo Rag” (from the Grimshaw book “Plectrum Playing for Modern Banjoists”) and “The Kilties”. Before these releases, however, the Quartet had made some exceptionaly good discs (l0in. 78 rpm) for the HMV label, namely: “Tune Tonic” / “You and a Canoe”, “Darktown Dandies” / “Swanee Sing Song”, “Whistling Rufus” / “Snatches of Song”. All these have become collectors’ pieces.

The foregoing titles are an indication of the percentage of “recordable” music written by this famous authority, whose two great banjo books – “The Banjo and How To Play Ii” and “How to Excel on the Banjo” – are used by players throughout the world.

The 71 banjo works contained in the booklet are as follows.

Images of the Introduction to the booklet are provided below.

A representative song from “The Complete Banjo Works of Emile Grimshaw” — Chop Suey — is shown below. 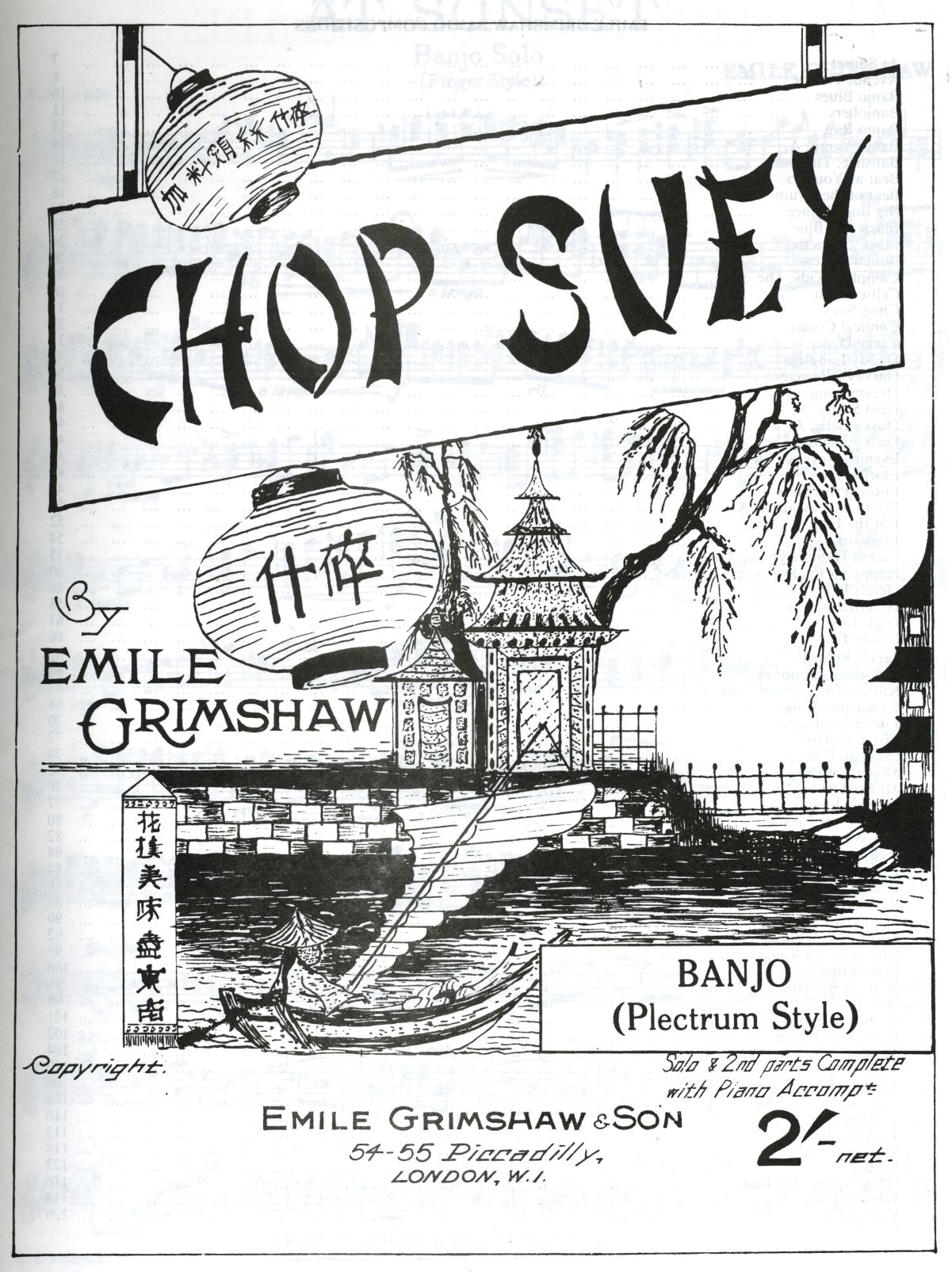