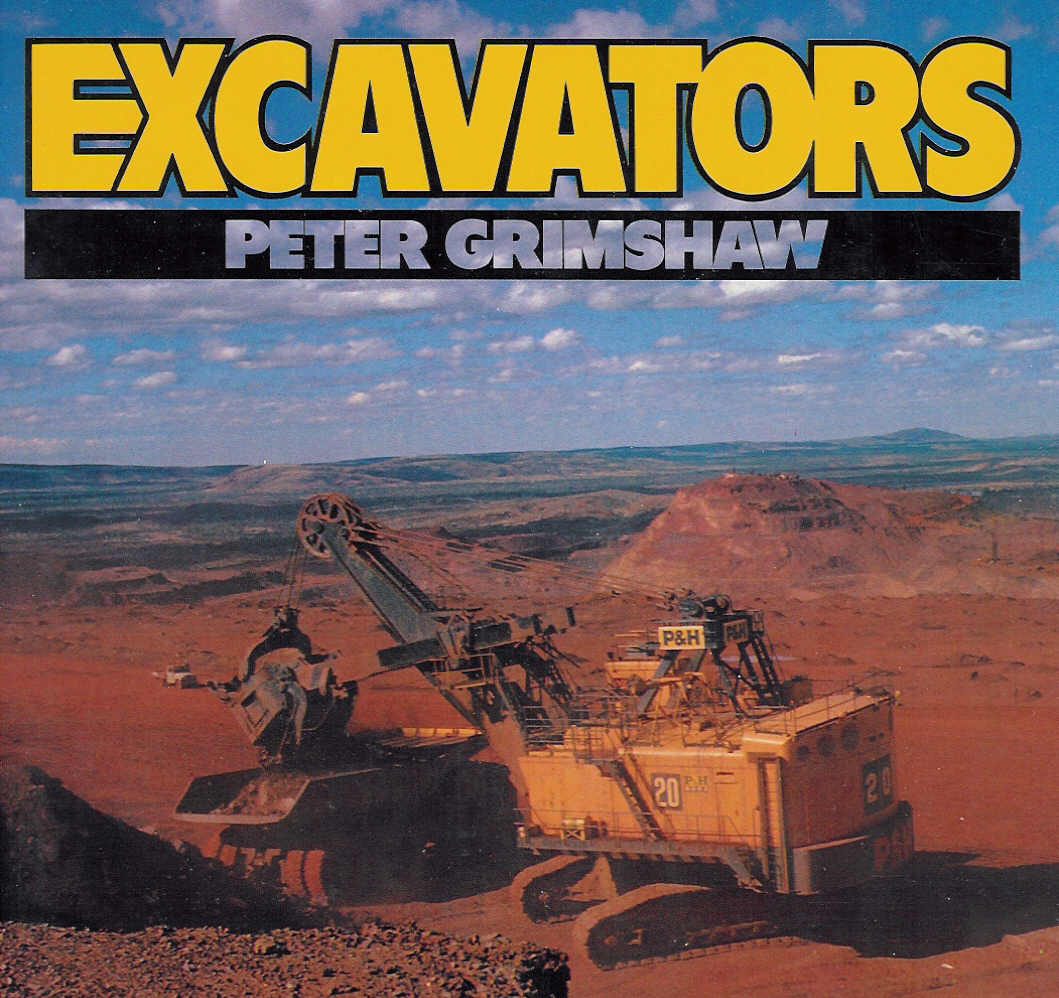 Here for the first time is an authoritative, lavishly Illustrated and comprehensive international survey of those most versatile of earthmoving machines excavators. Capable of operating on the greatest variety of sites and in extreme conditions throughout the world, these earth moving machines exhibit the most extensive range of equipment and sizes and include some of the largest moving land machines on our planet.

The book is a major work of research and information gathering by the author on a world basis. It traces the development of manufacturers and their products, from the first steam shovel of the early 19th century up to today’s machines of great technical achievement which include the large walking draglines, electric mining shovels and hydraulic excavators.

Excavators are responsible for the bulk of the world’s earthmoving. Their applications range from building and construction to creating transportation features such as harbours, canals and roads; they provide public services such as reservoirs and pipelines; they carry out agricultural work including irrigation schemes and fertilizer production; they surface mine for coal and for minerals such as bauxite, copper and iron ore; they excavate building materials, including limestone for cement, clay for bricks, sand and gravel.

Their size  often very great  and their considerable feats engender fascination in both young and old. Peter Grimshaw’s expert text and the wide range of colour and black and white photographs and illustrations both satisfy curiosity and stimulate interest. In addition, the book prov1des valuable quantified information for those involved in the manufacture or operation of excavators, and in both civil and mechanical engineering in general not just related to the earthmoving field. As a bonus, the book’s reference to preserved machines and to scale models relates the exciting world of the machines to that of the hobbyist and enthusiast. 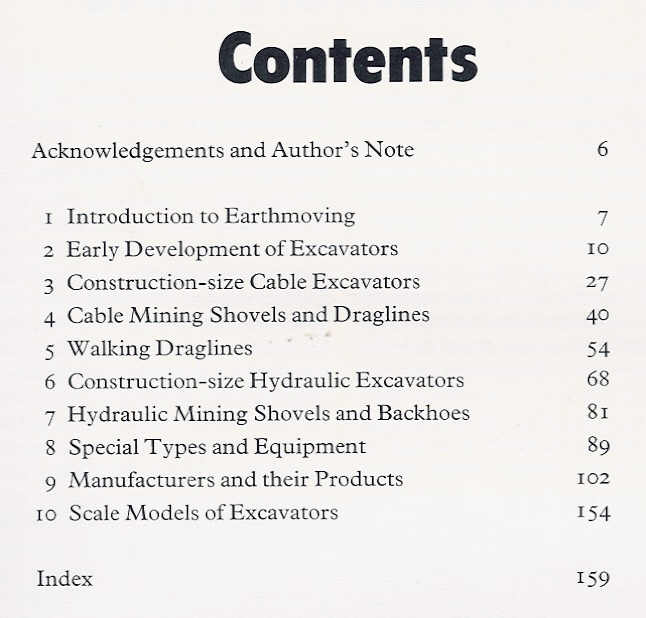 Peter Grimshaw has had a lifelong involvement with earthmovers and heavy plant. He has travelled extensively in Europe, the U.S.A. and Canada to study and observe the machines in action. He is a research graduate and expert in social planning as well as being a Fellow of the Royal Geographical Society and of the Geological Society of London. He has wide experience of contract research in many fields and is the author of more than 50 technical reports, special papers and books.

Moving the earth is a fundamental human activity. Children defy advancing tides at the seaside with buckets and spades to make transient castles and canals, hills and hollows: the old relive their creative youth in treasured gardens by turning over and re-moulding small portions of the earth’s surface to make them both attractive and productive.

The act of digging must have always been of great significance. In ancient times building materials were obtained for constructing shelters; primitive settlements were protected by moats and upstanding earthworks; waterways were dug to irrigate or drain the land; underground chambers and mounds were made for the burial and commemoration of the dead; and later minerals and fossil fuels were extracted from shallow workings, and major routeways built, to provide the basis of industry and trade. Early examples of earthmoving were often no mean feats. King Cheops Great Pyramid at Giza, Egypt, was built some 4,600 years ago and involved moving around 1.2 million m3 (1.6 million cu yd) of the earth’s surface; the Great Wall of China, over 2,000 years old and stretching for some 3,220 km (2,000 miles) required no less than 55 million m3 (72 million cu yd) of material for its construction.

In more recent times the difficulties inherent in underwater excavation resulted first in floating devices to dredge rivers, dig canals and construct harbours. In 1513 the indomitable genius Leonardo da Vinci produced a design for underwater digging machine; there exists a drawing of a bucket chain dredger used in Belgium on the Rupel-Scheldt canal in 1560; and an illustration in a book by the Austrian Bishop Verantius, dated 1591, appears to show a pontoon-mounted grab dredger operated by hand winches and a treadmill. Predictably, therefore, the initial application of steam, the new source of power developed in the eighteenth century, to earthmoving was to water-based equipment. The first steam excavating machine was apparently designed by Grimshaw of Sunderland, Tyne and Wear, in 1796 when he arranged for Boulton & Watt to build and install a 3 kW (4 HP) engine in a scow a flat-bottomed boat to work dredging machinery.

For centuries little progress had been made in the development of dry-land earthmoving methods: spades, picks, rakes and trowels used to dig, and sledges, wheelbarrows and containers suspended from yokes employed to carry, remained fundamentally the same. Animal power supplemented human labour. Despite, however, the advent of steam power and the development of primitive machines for underwater excavation, these dry-land traditional methods of earthmoving were employed well into the industrial revolution of the nineteenth century. Labour then was both cheap and plentiful, certainly in many countries for a long time, and there was little incentive to apply steam power to dry-land projects. The bulk of the UK’s navigation canals was created, in the late eighteenth century an early nineteenth century, solely by hand labour.

Similarly, the great majority of the cuttings embankments and tunnels required for that country’s railway system -on which construction commenced in earnest in the 1820-30 period an which was largely completed by the end of the
century -were made by navvies: labourers so called since their predecessors dug the UK’s network of navigation canals.

Nevertheless, in North America the situation was somewhat different. Here a vast continent, being settled over large areas for the first time, required extensive earthmoving projects; particularly those associated with railway construction opening up ‘the West’. The scale of these operations, the speed required and a relative scarcity of labour were factors which led to early experiments with powered dry-land earthmoving machines. William Otis responded by providing the first practical excavators in the 1830S and 40S, although even in the USA it was to be another twenty or thirty years before the incipient excavator manufacturing industry began to gain substantial momentum.

Excavators based on the principles established by William Otis -with single buckets and with at first limited slew but, after 1884, developing into full 3600 slew machines -were to become the prime earthmoving machines. The smaller types include the most versatile base machines of all construction and escavation equipment; the larger more specialised ones are amongst the biggest self-propelled land vehicles on earth. These then, with bucket capacities from 0.08 to 168 m3 (1/10  220 cu yd) are the subject matter of this book.

Nevertheless, excavators have not been developed, or used, in isolation from other forms of excavating machines. Prior to the application of powered machines to earthmoving in the USA, horse-drawn blades and scoops were often used in
conjunction with wooden carts pulled by mules. Later, small metal scoops which were pulled by horses and guided by an operator were tipped to fill, dragged, and tipped again to dump. Primitive ‘scrapers’ of this type, including the
Fresno patented in 1882 by James Porteous, a blacksmith in the town of Fresno, California, were used throughout the nineteenth century for light excavation tasks, eventually motive power was provided for larger wheeled models by steam traction engines. It was R. G. Le Tourneau, originally also from Stockton, California, who developed the scraper into its modern form: a machine which performs three basic functions loading, hauling and dumping.

Although it was in England where the first caterpillar tracks (crawlers) were developed Richard Edgeworth of Hare Hatch, Berkshire, patented a system as early as 1770 -it was yet again in California at the beginning of this century where practical developments of major significance took place. Benjamin Holt of Stockton and Daniel Best of San Leandro laid the foundations of what was to become the Caterpillar Tractor Company. However, in the UK David Roberts of Richard Hornsby & Sons of Grantham, Lincolnshire, played an equally important design role in the formative years. Crawler tractors soon logically developed into earthmoving bulldozers and loading shovels as well as haulage units for scrapers: now Caterpillar’s D10 bulldozer is of no less than 522 kW (700 HP).

Wheel loaders and bulldozers were evolved from agricultural tractors in the 1920-30 period, the name of R. G. Le Tourneau again being in evidence amongst others such as Frank G. Rough. The grader, like the scraper, has a long
ancestry. Horse-drawn wagons with adjustable blades were used for tasks such as levelling roads early in the nineteenth century but in 188 5 J. D . Adams, a road inspector from Indianapolis, Indiana, invented a ‘Little Wonder’ unit whose two wheels could be made to lean against the sideways thrust of an angled blade. The Adams company, and also later the Russell company, pioneered subsequent developments in the USA.

Backhoe loaders also evolved from agricultural tractors following advances in hydraulics technology during and soon after W or ld Y/ ar 2; Case in the USA with JCB and Whitlock in the UIZ were early entrants into this field of earthmoving. Trenchers for land-drainage and pipe-laying work first appeared in the USA around 1900 with manufacturers including the Cleveland, Barber, Greene and Buckeye companies. The similar, but larger, bucket chain and bucket wheel excavators originated in Europe. In Germany Lubecker of Lubeck, and in France Boulet of Paris, were makers of bucket chain machines at the end of the nineteenth century. The bucket wheel excavator has been developed to enormous proportions in East and West Germany; by companies such as O & K, Krupp & Buckau-Wolf in West Germany with individual machine weights approaching 14,000 t and daily outputs of 240,000 m3 (314,000 cu yd) of material. Large models of this type of machine have also been made in the USSR and USA.

All of these other types of earthmoving machines -scrapers, crawler and wheel loading shovels and bulldozers, graders, backhoe loaders, trenchers, bucket chain and bucket wheel excavators, have limitations to their usage: none can compete with excavators in range of applications through their versatility and immense available power. Excavators dig the foundations for buildings and excavate the raw materials for their construction including clay, limestone, sand and gravel; create transportation features such as canals, roads, railways and harbours; undertake earthmoving tasks for utilities including reservoir construction, trenches for pipelines and irrigation and flood control work; extract the bulk of the world’s minerals exploited by surface mining, for example, copper, iron ore and bauxite; playa large and increasing role in coal production obtained by surface mining; and provide phosphate for fertilizer production.

It is an appropriate time to undertake a review of these machines and the industry which produces them; a hundred and fifty years have elapsed since the first excavator was made and a hundred since the initial full slew machine was
devised. This book is an affirmation of the value of the machines themselves: impressive machines which moved the British author I. B. Priestley after a visit to Ruston-Bucyrus’ factory in 1933 when compiling his English Journey, to
write of ‘these giant excavators, which sink their teeth into the earth and bite away tons and tons of it in a few minutes’ ; machines which emulated the movements of human limbs long before electronic robots were conceived; machines which, despite man’s apparent inability consistently to match available resources in the developed world to ever-increasing latent demand elsewhere, are nevertheless still required in great quantities to relieve poverty and provide acceptable standards of living; and machines which, in the opinion of one German professor, may well be of therapeutic value in the year 2000 as large-scale earthmoving will never be (at least for as far as can be adjudged) fully automated and will always require the active participation of man.

The book is, though, really a tribute to people the countless numbers who, over a century and a half, have designed, manufactured and put to use excavators to ensure that ‘Progress begins with Digging’.

Mechanical excavators were first devised for dredging: this single-bucket machine was illustrated in a book by Austrian Bishop Verantius in 1591. 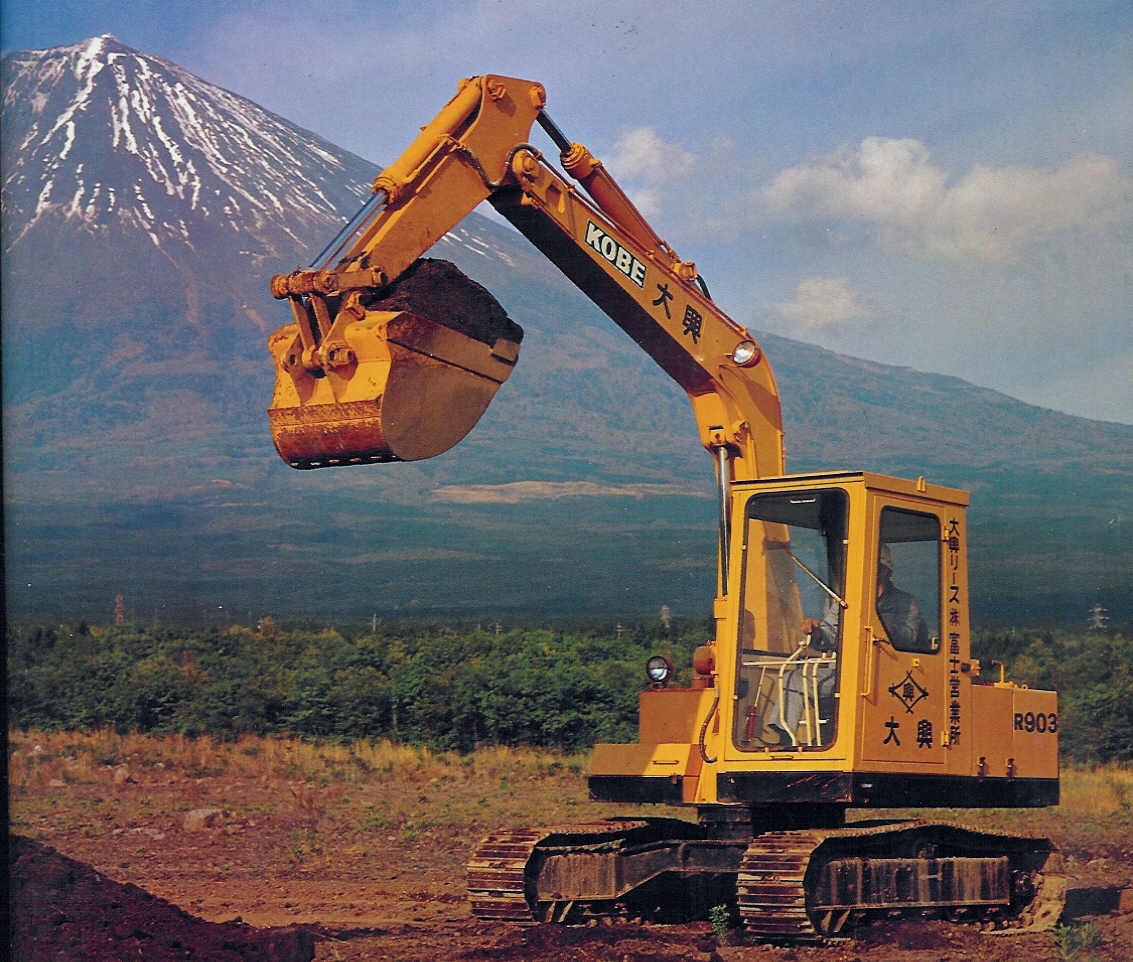