A Village Near Parbold in the District of West Lancashire

Thanks go to Don Grimshaw for bringing this Grimshaw location to the attention of the website author.

Parbold
The charming and picturesque village of Parbold, which rises from the River Douglas to form Parbold Hill, is an ever-popular visiting place. Offering magnificent views over the surrounding countryside from Parbold Hill, the village itself is a thriving shopping area. The township is blessed with excellent places to eat and drink as well as a beautiful stretch of the Leeds/Liverpool Canal – ideal for an autumn stroll or a summer picnic.

Parbold was first mentioned in the documents of Burscough Priory and the Cockersand Abbey at the turn of the 12th and 13th centuries and in 1292 was referred to
as a place “where pears are grown” Bold is derived from the old English meaning, “a place of dwelling. Most of Parbold was owned by the Lathom Family of Parbold up to the Civil war after which time it was confiscated. Parbold Hill, at almost 400 ft dominates the parish.

Parbold windmill was built in the 18th century to replace an earlier one on the River Douglas. This one was steam powered. Nowadays, the front annexe to Parbolds old windmill plays host to The Mill House Gallery. The gallery has a constantly changing exhibition of contemporary art by some of the North Wests leading artists. Also on the premises are the studios of James Bartholomew (a small selection of James earlier work is on permanent display at Beacon Country Park Visitor Centre) and Alistair Adams. The Gallery is open Thurs-Sun 11-5 or by appointment. Tel no. 01257 462500.

Harrock Hill is a well known beauty spot with extensive views over the Lancashire Plain. In the past, Harrock Hill grit, a course sandstone, provided the basis of the quarrying industry of the area. Close to the summit of this 147 metre hill are the remains of Harrock Hill windmill. The building, cut into the gritstone of the hill, was originally three storied with cellar and entrance tunnels below ground level. The mill is illustrated as being in use on Yates 1786 map but derelict by at least 1845.

Situated on the edge of the South West Lancashire plain, the village of Parbold has grown up around a number of small, relatively scattered, agricultural communities through which the river Douglas meanders on its route from Wigan to the Ribble estuary. With no evidence of Roman habitation and no mention of Parbold in the Doomsday survey, it can be assumed that, during those times, there was no main centre of population in a sparsely populated area.

First references to Parbold appear in the late 12th century in the documents of Burscough Priory, to whom grants of land were made. Following the Norman Conquest, the area around Parbold was within the Barony of Manchester which was held by the Grelley family, but, by the mid l3th century, Parbold was held by the Lathom family. From this period until the mid l8th century there was no economic development or significant social change, the area consisting of scattered rural hamlets whose economy was almost solely dependent on food production, either by farming or related industries such as milling. Several water mills have operated in the Parbold area since the 13th century, although all traces have long since gone.

There are no physical remains of Parbold dating earlier than the late 17th century with the oldest surviving stone houses, Common House and Manor Cottage, dating from that time. Parbold Windmill, whose structure still remains, was built in 1794 but ceased operating in the mid l9th century. Douglas Chapel, which served the religious needs of the people of Parbold and surrounding area from the l3th century, was demolished in 1878 and the stone used to build the school on Parbold Hill. The new church, Christ Church, was consecrated in 1875.

It wasn’t until the River Douglas was made navigable in 1742 and the subsequent construction of the Leads and Liverpool canal, which passed through the heart of Parbold less than 40 years later, that any significant economic development occurred.

On the western edge of the South Lancashire coalfield there are occasional thin coal seams, which in the l8th and l9th centuries supported 3 small collieries in the area. The underlying sandstone provided the basis of a number of quarries in and around Parbold and was well known for its resistance to erosion. Parbold stone was used in many projects in and around Wigan, including Haigh Hall. The navigable waterways were therefore able to provide a means of transport for the coal and stone trade, as well as the area’s agricultural products. This outward trade, along with the inward trade of corn for milling, lime and general goods, required the building of wharves and stockyards, which were connected to the quarries by rail systems. Boat building in the l8th and 19th centuries also added to the economic development of the area during that time. However, in contrast to the economic revolutions occurring in other parts of Lancashire, the changes in Parbold were minor and the population increased only slightly during the l9th century, being 255 at the beginning and 598 by 1891.

It was the arrival of the railway in the mid l9th century which provided the biggest boost to the population as Parbold became accessible as a commuter area for the better off. Prior to this there had been no real centre of population, but with new domestic building and shops springing up, the scattered housing became more integrated and, by the 20th century, the village had almost assumed the layout which exists today. With Parbold becoming clearly identifiable as a physical entity and its inconvenient distance from the mother church at Eccleston, the vi1lage became a civil parish in 1894. It has continued to expand as a commuter town from that date. What had been a rural community is now a popular dormitory town.

The gradual evolution of Parbold has therefore taken place over the centuries without any dramatic events having taken place in the locality. Major political and social upheavals, which significantly affected other parts of Lancashire, impinged only slightly on the area around Parbold. However, the very fact that the village has been a passive bystander rather than an active participant in the great moments of History has meant a continuity in its development and has provided a social cohesion which has given Parbold its appeal as a residential area.

Parbold Hill when the road was cobbled:

Ducks on the canal: 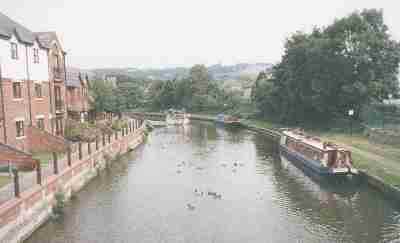