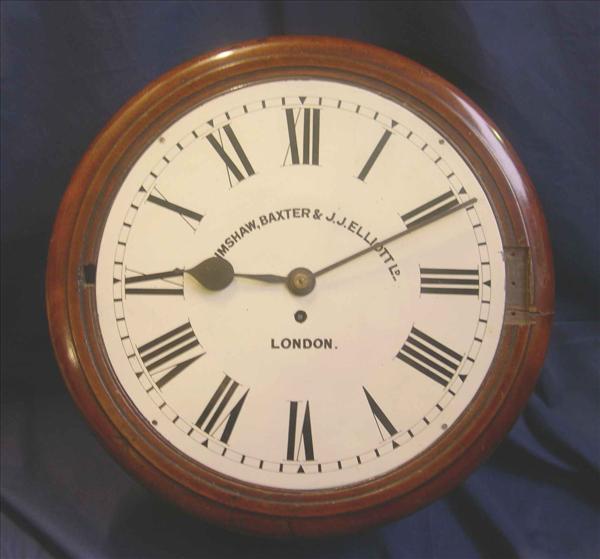 Grimshaw, Baxter and J.J. Elliott (GBJJE) was a watchmaking firm that was apparently in business from 1909 to 1921, during which time a number of models and styles of clocks and watches were manufactured. It appears that the firm Grimshaw Baxter, which continued after the dissolution of GBJJE in 1921, continued to use the full name of Grimshaw, Baxter and J.J. Elliott at least until 1958.

The following website provides a brief history of the J.J. Elliott and F.W. Elliott companies (shown below), including the merger with Grimshaw Baxter from 1909 to 1921.

The name of Elliott has been synonymous with quality clocks for well over over 100 years. In 1865 James Jones Elliott of 156 Cheapside in the City of London, was apprenticed to “Bateman” of 82 St John Street, Smithfield, London., to learn the art of clock making.

It was not obvious at the time, but this was to be the origin of a company that would achieve a worldwide reputation as a manufacturer of the fine quality Elliott of London clock.

JJ Elliott specialised initially in producing pinions and balance shafts, he progressed to making, and patenting, a weight driven movement which had chimes on tubes. This original Elliott clock was very successful and resulted in considerable trade with America.

James Elliott’s son, Frank Westcombe Elliott, was originally entering the retail trade as, when he was 17 years old, his father bought a partnership with a jeweller called Walden of Brompton Road, London. On the 16th April 1904, JJ Elliott died and Frank succeeded him to run the clockmaking business.

In 1909 the clockmakers company of JJ Elliott amalgamated with Grimshaw Baxter, and the factory moved to Grays Inn Lane, London, in 1911, followed by a further move, in 1917, to larger premises in St Anns Road, Tottenham, London.

In 1921 the partnership with Grimshaw Baxter was dissolved and Frank Elliott joined a well known firm of Bell Founders and Clockmakers, Gillett and Johnson Ltd, in Croydon. In 1923, two years later, he took over their clock factory and formed the famous company of F.W. Elliott Ltd. He was joined by his two sons, Leonard and Horace Elliott, who had served their apprenticeships in the trade. The third son, Ronald, joined the company in 1929.

Elliott’s started to produce clocks for the armed forces when war was declared in 1939, together with test gear and apparatus for the Rolls Royce engines used in the RAF planes. The factory was hit by incendiary bombs in 1943 on two occasions but production was not seriously affected.

In 1944, Frank Elliott died at the age of 69 and Horace Elliott assumed the role of Managing Director, whilst Horace controlled sales from a showroom in Hatton Garden. In 1952, Horace Elliott was elected Chairman of the British Horological Institute in the same year as Tony, one of Horace’s sons, joined the company after training in cabinet making. He was appointed manager of the cabinet shop in 1967.

Ronald Elliott died suddenly in 1966, at the age of 54, his son Peter had joined the company in January of the same year, having been trained as an engineer at Vickers Instruments Ltd. Peter Elliott was appointed as a Director in 1969.

If the partnership with Grimshaw Baxter dissolved in 1921, it is unclear why ads for GBJJE clocks were still appearing in 1958, as shown below. It appears that the full GBJJE name was kept by the “Grimshaw Baxter” portion of the concern when the dissolution took place.

The following ad from a 1958 issue of the Horological Journal1 was obtained by purchase from Ebay in November 2005.

In June 2005, an excellent listing of a GBJJE clock appeared on Ebay by a lister under the moniker springer656 with the following description (slightly edited).

Here is an opportunity to own this lovely Fusee wall clock.

[Webpage author’s note: Fusee – a spirally grooved spindle in a clock that counteracts the diminishing power of the uncoiling mainspring. Source: http://www.dictionary.com]

The case is made of mahogany dovetailed jointed sections in excellent condition. The back box has the dovetailed joint to each corner. Totally right for a clock of this age, As the reproduction clocks only have 45 degree mitered corners. This clock is listed as a “project”, as it will require a brass bezel and a small repair to the surround at the hinge area only. The enameled dial has the maker’s name, “GRIMSHAW, BAXTER & J.J. ELLIOTT Ltd. LONDON”. The movement is constructed of quality thick brass plates and pillars, bearing the markings “G B J J E”.

The back box is pegged into place by four original pegs. It has the same numbers stamped so all in order there. The case also has an inspection door in the sides to view the movement and hang the large solid brass original pendulum. Whilst still being a :project”, this clock has been on my wall and running great with good time keeping for 10 days. It is still is not looking to be wound up so I am unsure if this is a two week or month runner. This is a very very heavy quality clock so shipping would be at cost.

Overall, this is a very original Fusee dial clock by a good London maker which is all original and has it’s key and pendulum working and keeping spot on time; it is just in need of a pendulum and a small repair.

CONDITION: I’m no expert on clocks of this period, and whilst I believe it to be original, I know it is rare for no alterations or repairs to have been made over the years. The case appears in very good condition free from damage or woodworm. I can see no unexplained holes in the case or movement which tend to be evidence of changes. Having both bottom and side door access in good order and as it should be. The mahogany surround, in very good order with very minor marks that you would expect from a clock this age, Yet still from damage. Otherwise the case is very good indeed. This Fusee clock measures 18 inches diameter x 6 inches deep and 14 inch dial.

The clock keeps excellent time and fully working condition and clean. Overall a really outstanding clock, and a very rare opportunity on Ebay! 100% genuine (or your money back, so buy with confidence)

This description was accompanied by the following excellent photos of the clock being placed on sale: 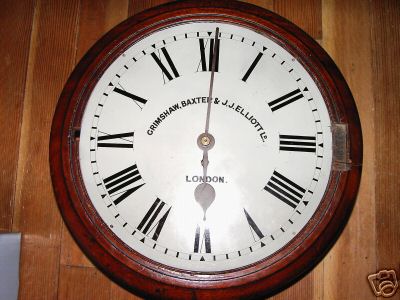 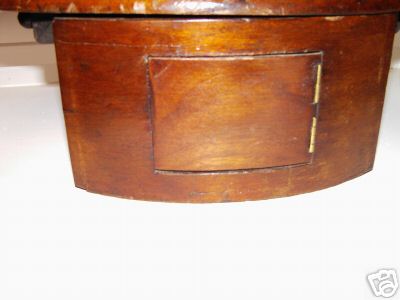 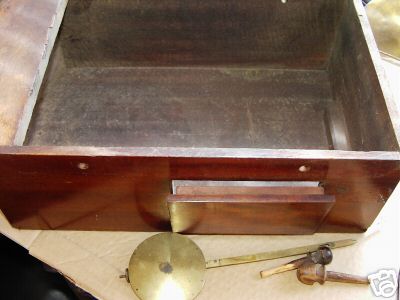 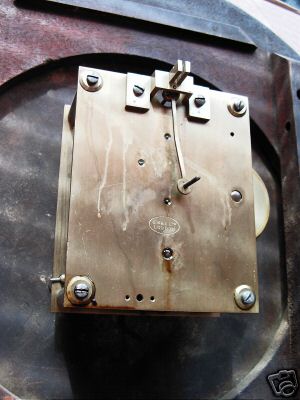 The description and photo shown below were found on the following internet site in June 2005. The price shown was a mere £950.00!

ref 623. Grimshaw Baxter & JJ Elliott A large single chain fusee dial wall clock with a 14 inch white painted dial, inscribed with the above name and London. The partnership between JJ Elliott and Grimshaw Baxter started in 1909 and was dissolved in 1921, which dates this clock to that period. The case is mahogany and the clock in all original condition. Height 18 inches. 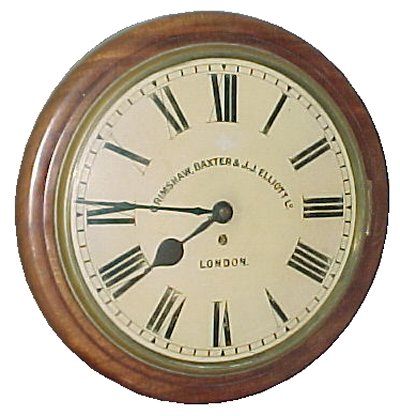 Another listing and associated description and photo are shown below:

In January 2007, a military pocket watch was listed by Georgian House Collectables, including six fine photos. The description of the watch from the listing (slightly edited) is shown below, followed by an excerpt from the vendor’s webpage.

I’ve just had this watch serviced. It is in full working condition and a RARE signed dial type. It is a beautiful watch. As you can see the CRYSTAL — glass is scuffed but original and the bevelled edge type. It has very minor nibbles on the edge as can be expected. It is a CROWN wind pocket watch. No key needed. You will see it is a BLACK dial with the enamel numbers. Slight paint loss on here and the LARGE hand has lost some of its enamel too. Ot is signed GRIMSHAW BAXTER & J.J. ELLIOT LTD – LONDON – A. 889. It also has a SECONDS dial.

Turning it over you will see on the edge the number once again A. 889. The rear has engraving A 889.G.S. Mk II. With the CROWS FOOT this is a SCREW OFF type back. I will make sure it’s not fully tight when I send it to you. But make sure you tighten it up usually to keep the dust out.

With the back off you will see it says CUPREL regd. Then DENNISON Watch Case Co. Ltd. Made in England. 239601.

Please be aware that I don’t have time to keep time on them. Any major problems like balance staff wheel etc. I will point out. If they wind and tick to me that’s working. 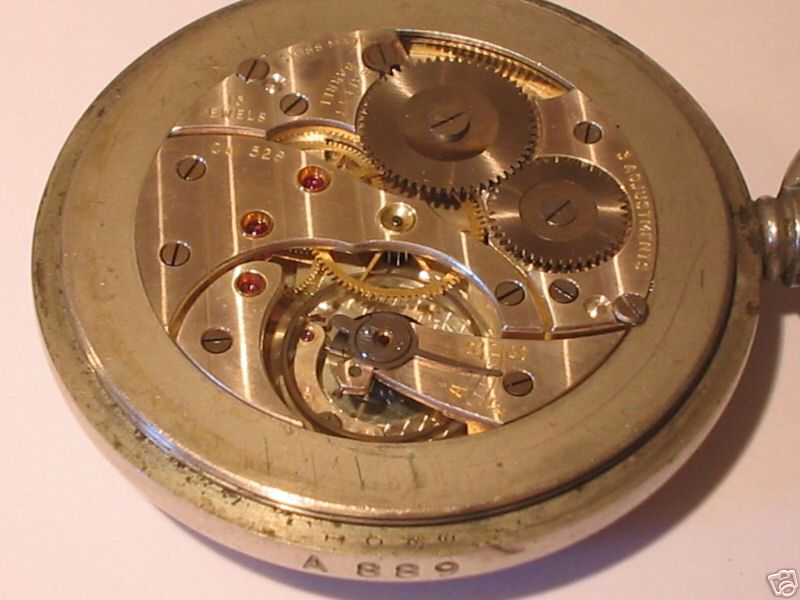 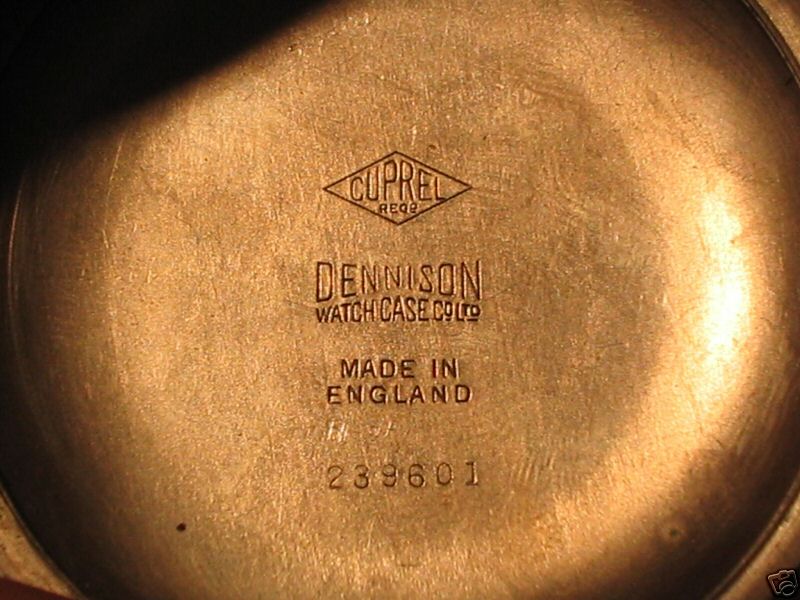