Gary Michael Grimshaw (See Figure 1 below) is a graphic artist specializing in the music business since his first concert poster design in 1966. He was the primary poster and light show artist for Detroit’s legendary Grande Ballroom through 1969. During this time he also created art for Detroit’s notorious rock & roll band The MC5. Currently an album cover design for the MC5’s first album “Kick Out The Jams” painted in 1968 is on view at Cleveland’s Rock & Roll Hall Of Fame & Museum. Gary established a connection with the SF Bay Area with frequent trips out west 1966-1970, where he worked for the beautiful newspaper, The San Francisco Oracle.

Thanks go to Gary Grimshawfor providing brief information on his family line in July 2001.

In July 2001, Gary provided the following background on his family line. Thanks to Gary for providing this information.

It is not known if Gary’s ancestors’ connections to the earliest Grimshaw family lines have been determined.

The following biographical Information is available on one of the websites investigated for this webpage.

A Vietnam veteran, Gary was consistently active in the anti-war movement after his discharge. The 10 year sentence imposed on his friend, poet John Sinclair, on a conviction of possession of 2 joints resulted Gary’s work on the John Sinclair Freedom Rally with performers John Lennon & Yoko Ono, Stevie Wonder, Bob Seger and many others in December 1971. Within days the Michigan State Legislature reduced the penalties for possession from a felony to a misdemeanor and John was freed.

Subsequently Gary became Art Director for the Ann Arbor Blues and Jazz festivals in 1972-73. In 1974 Gary returned to Detroit and concentrated on its thriving rock & roll scene. For the next 14 years he produced posters, recording packages, logos and graphics for all the major promoters and dozens of bands and clubs in the Motor City. Gary was also associate art director of Creem magazine from 1976-1984. In 1984 Gary co-founded MSA, a agency that had among their clients The City of Detroit, The Music Hall Theatre, as well as many bands and clubs. MSA also produced the Detroit For Africa concert in 1985.

The publication in 1986 of the Art Of Rock: Posters From Presley To Punk by Paul Grushkin was a watershed in Gary’s career. Iggy Pop, having seen The Art Of Rock, hired Gary to design the cover art for 1987’s Instinct on A&M Records. In 1988 Gary joined the poster publisher Art Rock as art director and moved to San Francisco with his wife Laura. After his resignation from Art Rock in 1991 Gary returned to freelancing(including 5 posters for Bill Graham Presents), reprinting his early concert posters and creating CD cover art. Exhibitions of Gary’s work include three one-man shows in Detroit in 1984, 1987 and 1996, the Visual Jams show during the opening of the Rock & Roll Hall Of Fame in 1995 and the San Francisco Rock & Roll Poster Revival show in 1999

Currently Gary has teamed up with fellow Detroiter Dennis Loren to form Artists Workshop West in Oakland CA and is opening a shop, PaperSong at Swan’s Market, in downtown Old Oakland 11/25/00.

The following biographical Information is available on another website investigated for this webpage.

While currently designing art for some of the largest entertainment organizations in the world, Gary is most excited about his work for MC5 * A TRUE TESTIMONIAL. He is thrilled to take part in a project that will bring the contributions of the MC5 to the world. Their history is his history. He produced hundreds of posters, handbills, cards, and advertisements for the MC5. And now Gary has designed the artwork that is featured on the exclusive T-shirts and hats for the film. His participation in this film is a true labor of love. Gary began his illustrious career as Detroit’s Grande Ballroom artist in 1966, served as the White Panther Party’s Minister of Art in the latter 1960’s and has continuously produced art for bands, record companies, concert promoters, clubs, radio and television stations, music publications, and graphic art exhibitions. The artists that Gary has worked with reads like a who’s who of rock and roll: the MC5, Iggy Pop, Jimi Hendrix, Eric Clapton, John Lennon, Buddy Guy, the Who, the Yardbirds, the Doors, the Grateful Dead, Dire Straits, Led Zeppelin, R.E.M., The B-52’s, Stone Temple Pilots, Oasis, Beck, and the Red Hot Chili Peppers, to name just a few.

His work can be found in numerous books; THE NEW BOOK OF ROCK LISTS by Dave Marsh and James Bernard (Fireside/Simon & Schuster, NY), THE SAN FRANCISCO ORACLE FACSIMILE EDITION edited by Allen Cohen (Regent Press, Berkeley), THE HENDRIX EXPERIENCE by Mitch Mitchell and John Platt (Pyramid Books, US & UK), THE ART OF ROCK: POSTERS FROM PRESLEY TO PUNK by Paul Grushkin (Abbeville Press), DETROIT JAZZ WHO’S WHO by Herb Boyd and Leni Sinclair (Jazz Research Institute), and GET ON DOWN: A DECADE OF ROCK AND ROLL POSTERS edited by Mick Farren (Futura/Dempsey and Squires, UK).

And on a subpage…

Future/Now Films, Inc. of Chicago continue to shoot interviews and more for their current production, the feature-length documentary MC5 * A True Testimonial.

Laurel Legler and David C. Thomas, along with camerman Jeff Economy were back in Detroit December 18-22 to conduct interviews with graphic artist Gary Grimshaw. Grimshaw was celebrating 30 years of reating art for the music scene with a retrospective of his work at Detroit’s Cass Café. Grimshaw, known as the Grande poster artist, designed numerous MC5 posters and handbills, and was Minister of Art for the White Panther Party. Grimshaw’s personal recollections, filmed at The Highway Press (printers of much of his artwork), The Detroit Institute of Art, and significant locations throughout Detroit and Lincoln Park (where Grimshaw and members of the 5 were raised) gave the filmmakers some powerful material. Grimshaw will be the designer of the key-art, including the poster, for MC5 * A True Testimonial.

The following images of Gary’s posters have been borrowed from websites. 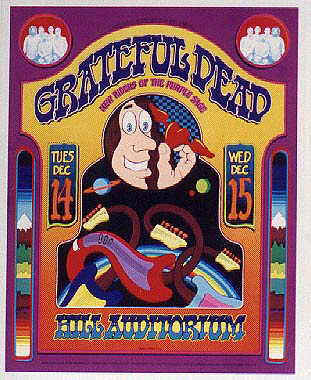 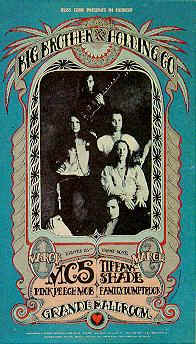 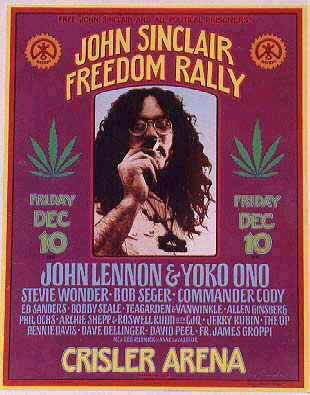 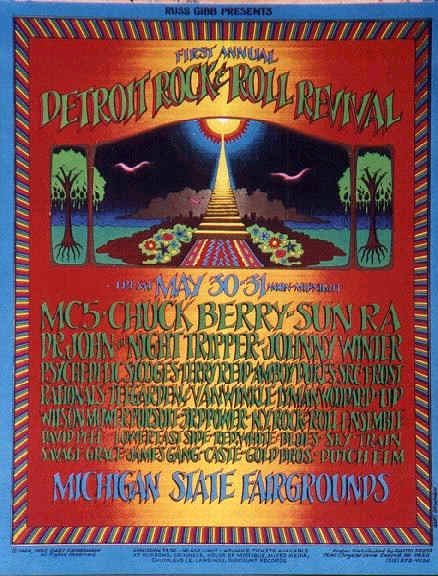 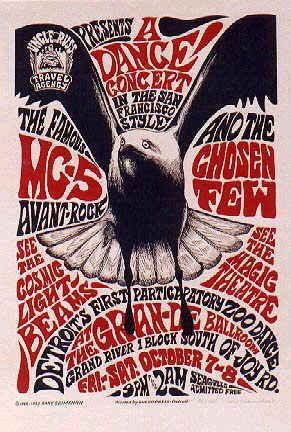 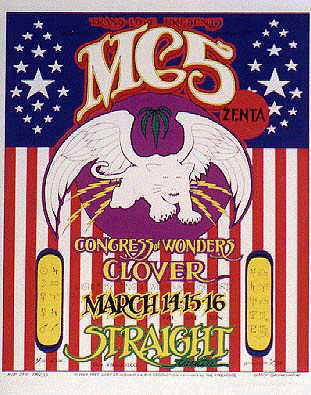 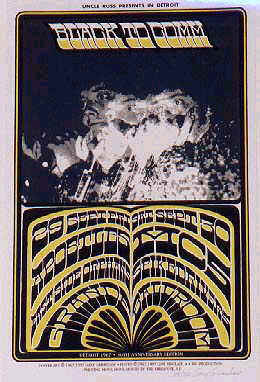 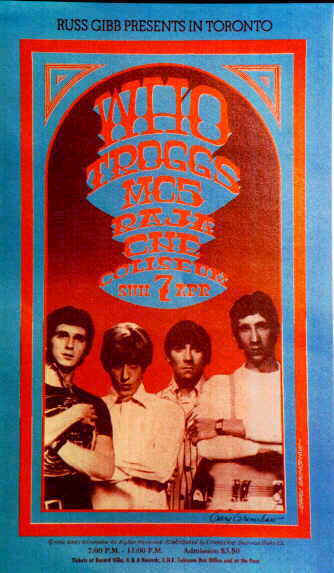 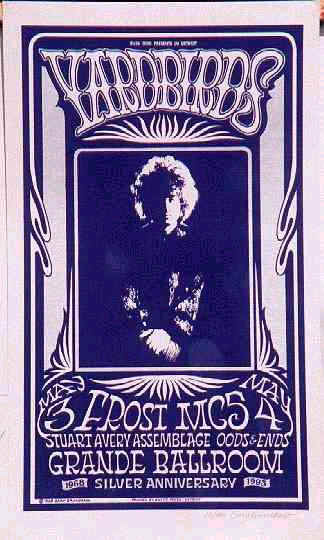