Sampler at Ackworth School in 1818 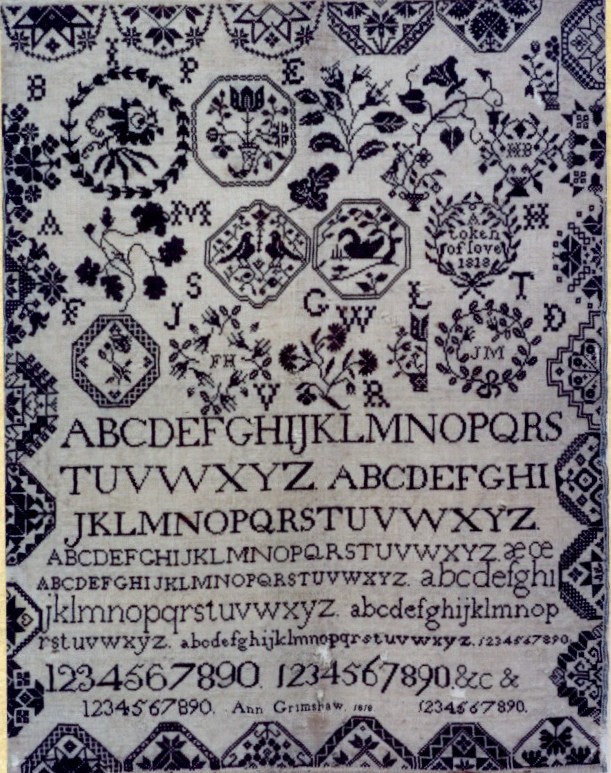 Ann Grimshaw was born in Calverley, Yorkshire and attended Ackworth School from 1816 to 1818, during which time (in 1818) she created a “sampler” of cross stitching. She was about 13 years old at the time. Her work is now at the Philadelphia Museum of Art and has become a popular item among cross stitch enthusiasts. The pattern is sold under a royalty arrangement with the Philadelphia Art Museum by the firm, The Scarlet Letter.

Ann, the daughter of John and Mary (Wilson) Grimshaw, was born on April 28, 1804. Her lineage to the earliest Grimshaw family in Yorkshire (described on a companion webpage) has been identified – she was a 5th generation descendant. She married James Thompson on January 12, 1825.

Additional Images from the Cross-Stitch Kit

Records from FamilySearch and WorldConnect

Ann’s sampler is sold by the vendor, The Scarlet Letter, as a kit consisting of the cross-stitch pattern in full size contained within a folder that provides explanatory information. An image of Ann’s sampler is shown in Figure 1. Figure 2 provides an image of the explanatory information on the folder. The text of the explanation is shown below Figure 2.

Figure 2. Image of front of folder in the cross-stitch kit, showing background information on Ann’s Sampler 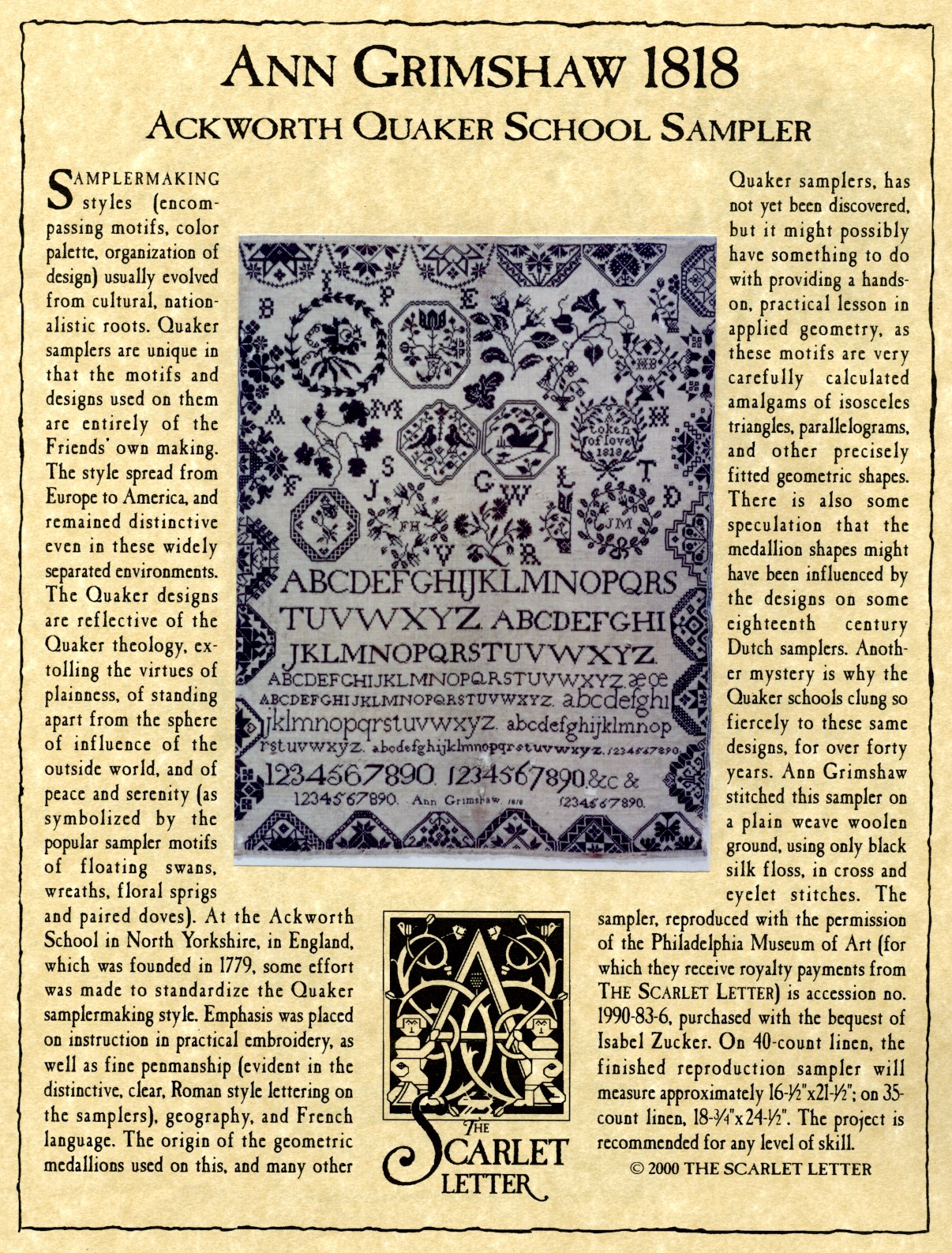 Samplermaking styles (encompassing motifs, color palette, organization of design) usually evolved from cultural, nationalistic roots. Quaker samplers are unique in that the motifs and designs used on them are entirely of the Friends’ own making. The style spread from Europe to America, and remained distinctive even in these widely separated environments. The Quaker designs are reflective of the Quaker theology, extolling the virtues of plainness, of standing apart from the sphere of influence of the outside world, and of peace and serenity (as symbolized by the popular sampler motifs of floating swans, wreaths, floral sprigs and paired doves). At the Ackworth School in North Yorkshire, in England, which was founded in 1779, some effort was made to standardize the Quaker samplermaking style. Emphasis was placed on instruction in practical embroidery, as well as fine penmanship (evident in the distinctive, clear, Roman style lettering on the samplers), geography, and French language. The origin of the geometric medallions used on this, and many other Quaker samplers, has not yet been discovered, but it might possibly have something to do with providing a hands-on, practical lesson in applied geometry, as these motifs arc very carefully calculated amalgams of isosceles triangles, parallelograms, and other precisely fitted geometric shapes. There is also some speculation that the medallion shapes might have been influenced by the designs on some eighteenth century Dutch samplers. Another mystery is why the Quaker schools clung so fiercely to these same designs, for over forty years. Ann Grimshaw stitched this sampler on a plain weave woolen ground, using only black silk floss, in cross and eyelet stitches. The sampler, reproduced with the permission of the Philadelphia Museum of Art (for which they receive royalty payments from THE SCARLET LETTER) is accession no. 1990-83-6, purchased with the bequest of Isabel Zucker. On 40-count linen. the finished reproduction sampler will measure approximately 16-1/2″ x 21-1/2″ on 35-count linen, 18-3/4″ x 24-1/2″. The project is recommended for any level of skill.

The cross-stitch folder contains a small note on Ann’s background on the inside (Figure 3). This note provides enough information to locate Ann in the Grimshaw line of Edward and Dorothy (Raner) Grimshaw, as described below. 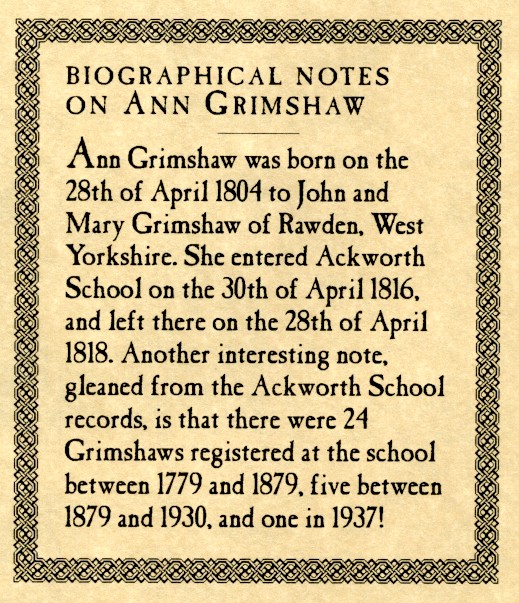 Additional Images from the Cross-Stitch Kit

Two additional images from the kit are shown in Figures 4 and 5 below.

Figure 4. Portion of the cross-stitch pattern included in the kit. 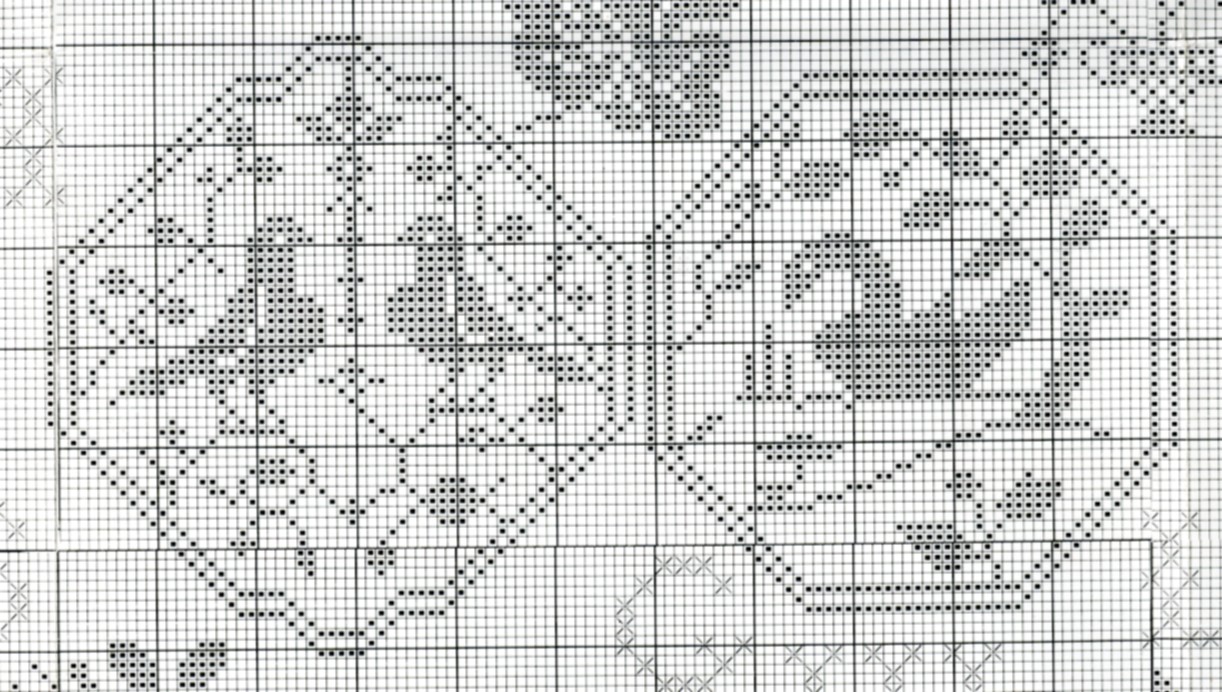 Ann’s sampler is described on the website (address shown below) as shown in Figure 6. It appears that the original is not on active display at this time.

Figure 6. Image and descriptive information on Ann Grimshaw’s Sampler as provided on the website of the Philadelphia Museum of Art 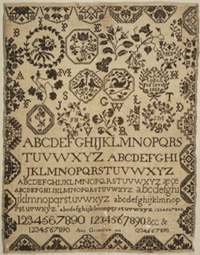 Ann Grimshaw was from Rawdon, Yorkshire, and attended the Friends’ boarding school in Ackworth, Yorkshire from 1816 to 1818.

Made in Ackworth, Yorkshire, England 1818

Made by Ann Grimshaw, English

Currently not on view

Records from FamilySearch and WorldConnect

Ann Grimshaw’s marriage record can be found on FamilySearch (the LDS family history website) at the following address; the record is shown in Figure 8.

Record submitted after 1991 by a member of the LDS Church. No additional information is available. Ancestral File may list the same family and the submitter.

Another record from WorldConnect with source information is shown in Figure 9; the website address is as follows:

Ackworth School, where Ann Grimshaw was a pupil when she created the Sampler, is still operating and is described as follows on the school website (address shown below);

Ackworth School was founded as a boarding school for Quaker boys and girls in 1779. Today it has 550 boys and girls of many different faiths aged 4-18. It has a truly international feel, as 90 of the pupils are boarders coming from a dozen or so countries

The Quaker ethos of looking for the good in people, encouraging the individual and making time each day for periods of quiet reflection still lies very much at the heart of the School. At the same time, Ackworth is academically very successful and has a multitude of extra-curricular activities.. 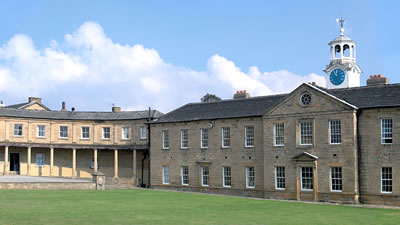 Ackworth School was founded in 1779 by John Fothergill on behalf of The Religious Society of Friends (Quakers) and the School Committee (or Board of Governors) is still accountable to this body. The School was established for Quaker boys and girls and the Quaker Christian ethos, with its emphasis on quiet reflection and the search for God within oneself and within others, lies at the heart of the School.

Periods of reflective silence form part of each day, during Morning Meeting and before meals for example, and each Thursday there is a short silent Meeting for Worship for the whole School. On Sunday morning boarders attend Quaker Meeting for Worship unless they wish to attend another place of worship. The importance of respect for others and honesty at all times emphasised by the Quaker faith helps to produce a calm, friendly atmosphere which is supportive and reassuring for young people.

The majority of pupils are from non-Quaker families and about 10% come from other countries. Indeed, the international nature of the School, especially in the Sixth Form, is one of its distinctive features. As in any such community there has to be a clear disciplinary framework and our expectations are high. Ackworth pupils respond well to this and to the opportunities provided for assuming responsibilities, for example within the boarding houses and on the School Council.

The significant events in the history of Ackworth School is described as shown below with the website address:

1778 Buildings bought by Society of Friends

1786 Shed Court formed by the building of stone shed

1793 Construction of flagged path from centre library to great garden

1823 School visited by Duke of Gloucester

1864 Double beds abolished on boys’ side

1876 Boys’ wash rooms over tailor’s shop Christmas holiday introduced as a trial measure, made permanent after 7878

1882-3 Introduction of Wednesday half holiday

1946 Co-education established throughout the school

Ackworth School is located approximately 30 km southeast of Leeds as shown in Figure 10. 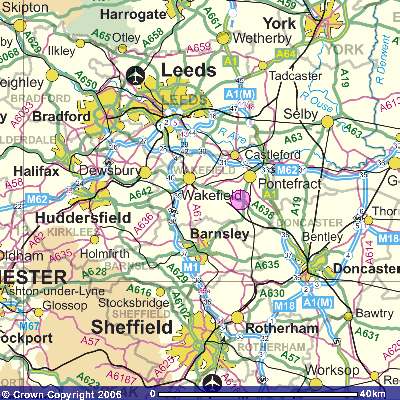 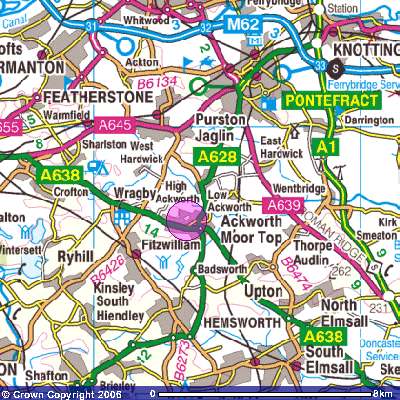 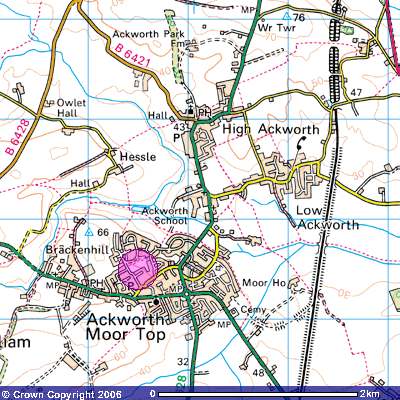 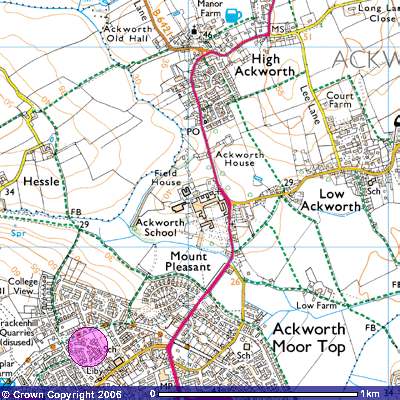 …last Easter I was … at the Ackworth Old Scholars week-end and bought a book titled “Quaker School Girls Samplers from Ackworth1 by Carol Humphrey. IBSN 1:0-9552086-1-0″– Carol being the Keeper of textiles at the Fitzwilliam Museum, Cambridge and a “world leading authority on textiles & samplers”.

Page 91-92 show Ann’s sampler with text. I think that Carol’s text which I will copy should really go with your photo to further explain what the reader is looking at.

“Ann Grimshaw made a combined medallion and marking sampler, far removed from the traditional format of Martha Pollard and her predecessors. This exercise of 1818 has a neat, half-medallion border framing not only three rows of wreaths, octagons and detached motifs, but also the seven alphabets, four sets of numerals and some ligatures, the whole making a well balanced composition. It has none of the feelings of experimentation that creeps into something of the monochrome work, rather the words “meticulous” and “ordered” spring to mind. Ann Grimshaw was at Ackworth for only two years, 1816-18 . She was obviously a talented young needlewoman who felt able to unify two traditional formats and create something , which so far is unique. Another exceptional feature is the use of black treat as opposed to the somber greens and browns. Ann must have decided that black for both marking and medallions would produce a more pleasing whole, or it could be, there were no colored silks available to her”.

The cover and relevant pages of the book referenced by Richard are shown below. 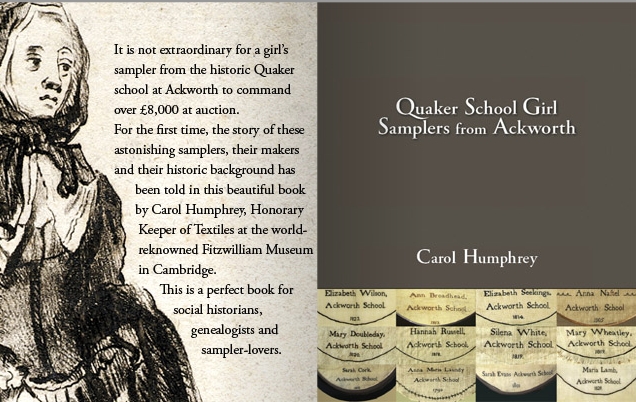 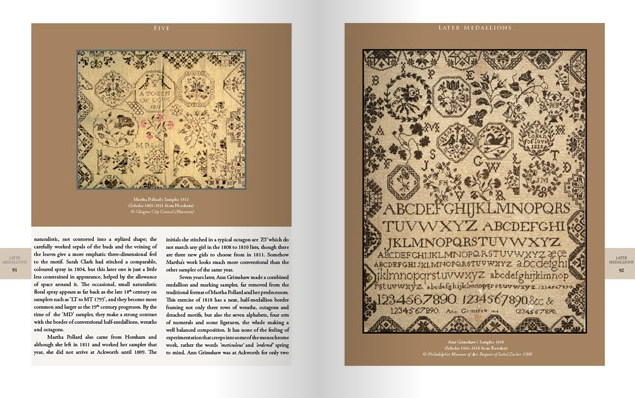 I usually go through a batch of Ackworth Archive material on each occasion looking for … well one never knows. This time I came across a faded photo taken at Ackworth School about the year 1853 of an Agnes Grimshaw, Boy’s Matron, 1851-1853. I should think photos of this date are uncommon and someone within your “Family” would be pleased to have it and work-out just who it is. Ackworth has no further information, even in the “Superintendents, Teachers and Principle Officers list 1779 – 1894.” Use it by all means, but for Ackworth’s Archives any answers would be useful. 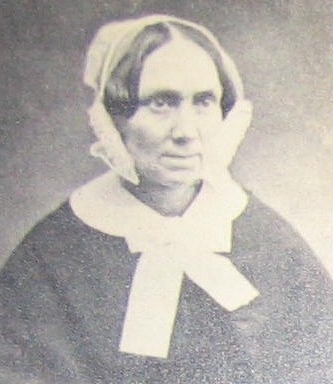 After the above photo was received from Richard, the following record of Agnes Grimshaw’s assignment as a “Boys’ Matron” was found in an 1895 reference by Hodgson2 (p. 86): 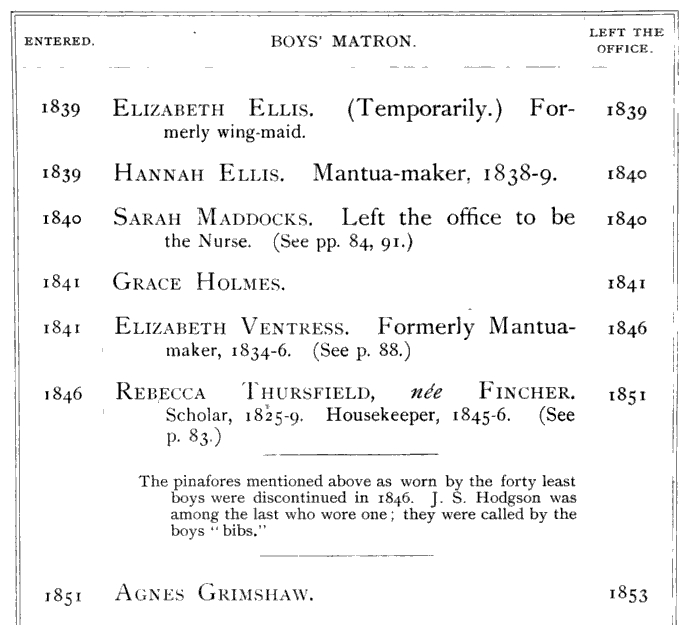 Webpage posted June 2006. Updated November 2009 with addition of information from Richard Walker on Ann Grimshaw’s sampler and on Agnes Grimshaw.