Note: Webpage is in preparation.

Bessie (Cummings) Rogers and her husband and descendants are described on a companionwebpage. The webpage for Jay’s parents, Jeremiah and Martha (Bennett) Rogers, may be found on another companion webpage.

The purpose of this addendum to Bessie and Jay Rogers’ webpage is to present a number of relevant photos on Bessie Cummings’ family. The photos were mostly obtained from Bessie’s nephew, Charles Anderson, during a scanning session in Oacoma, SD in 2010. Where designated, the photos also come from other sources, including Bessie’s children Ferne (Rogers) Roggow and Helen (Rogers) Tagtow Byrum.

Bessie’s grandparents, Amos and Eleanor (Houck) Cummings arrived in South Dakota from New York, with a stop in Iowa. All of their children are shown below except for Ada (the oldest), who may not have come to South Dakota with the family. “Pat” appears to be a nickname for Edgar Cummings.

Upper photo clearly earlier. One of the two women is likely to be Dora Cummings. Note the “dinner bell” on the left side of the house. 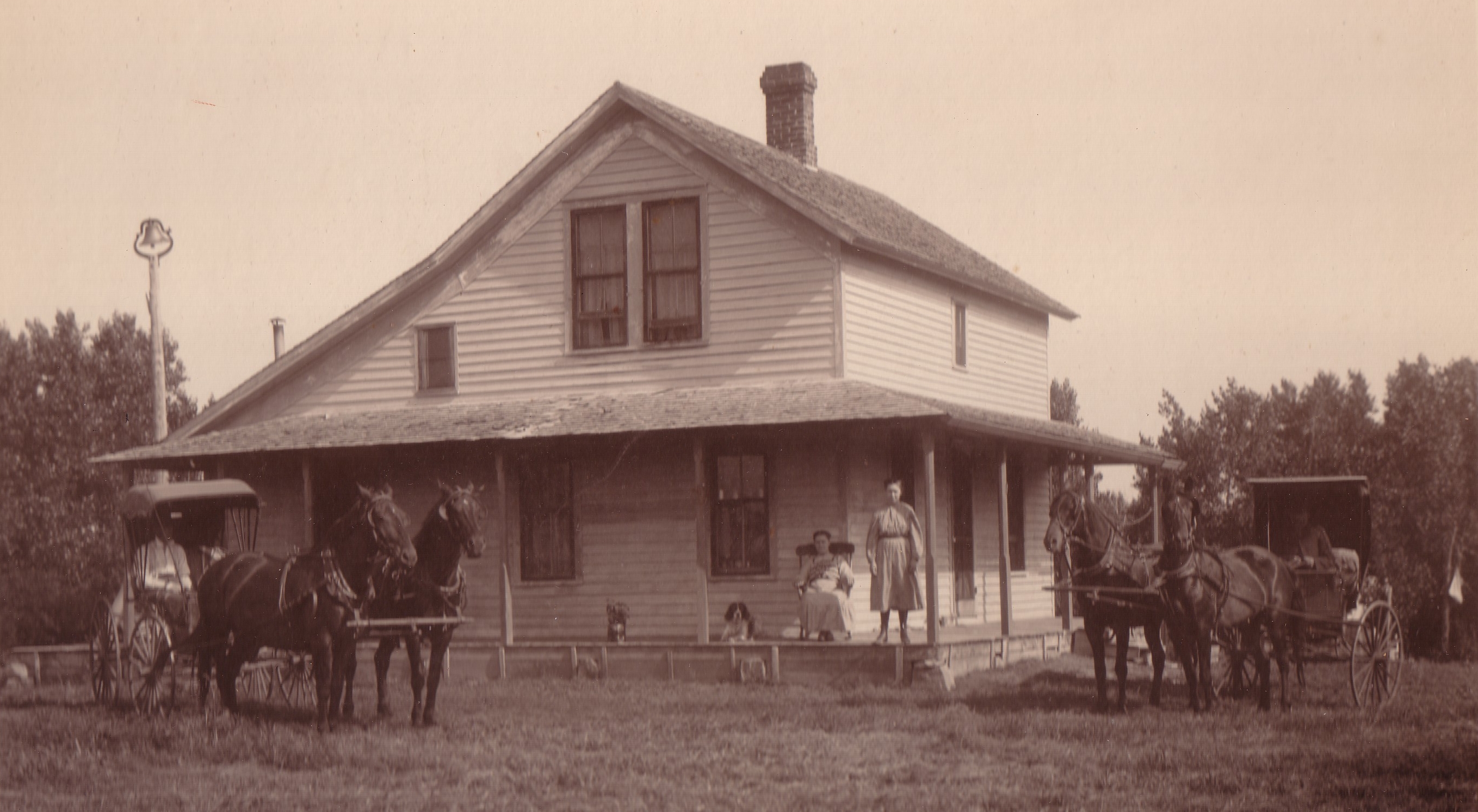 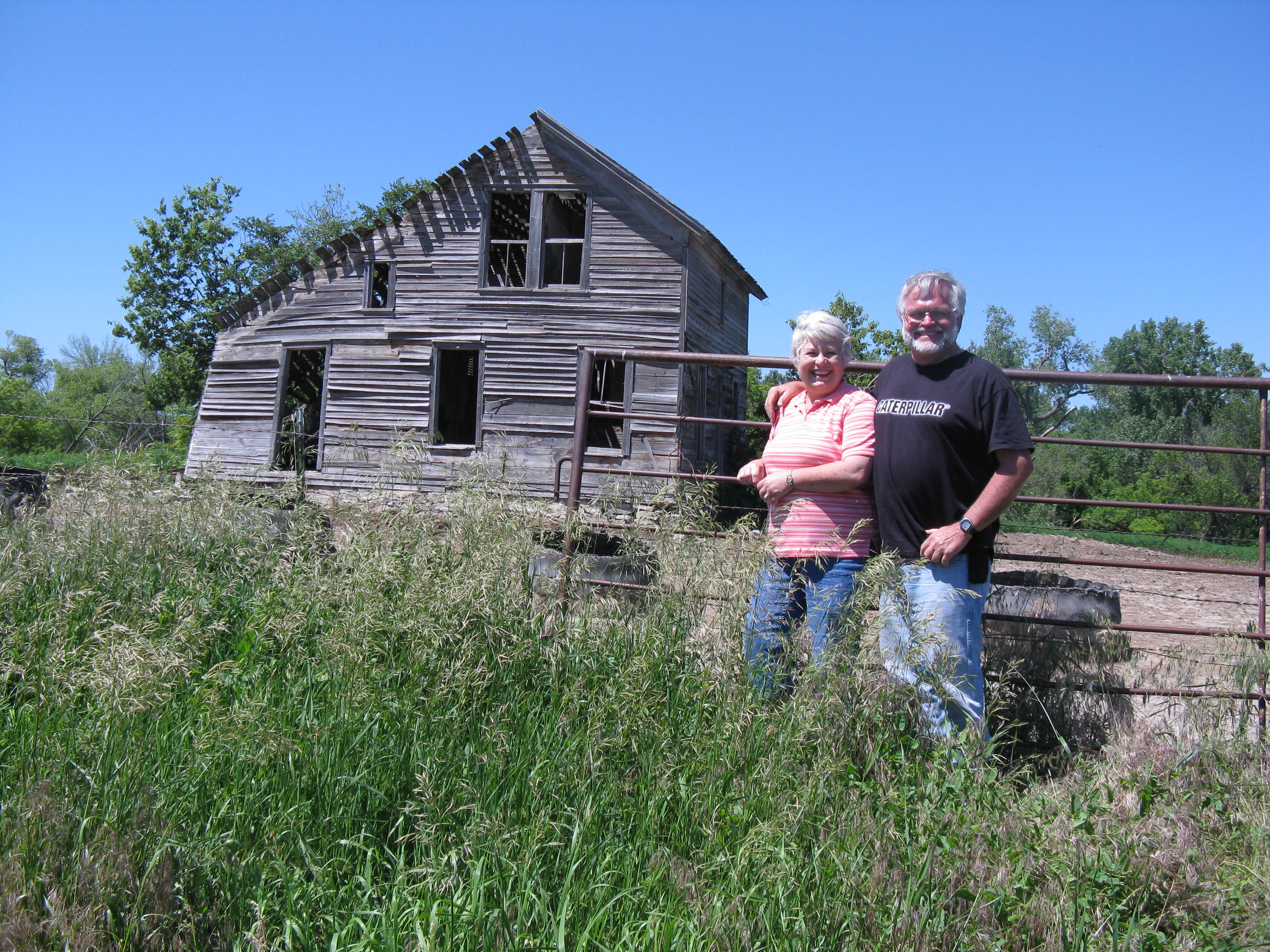 The location of Charles Cummings’ quarter section of land, where the home was located, was in Section 35 (SE 1/4) of American Township. This location is near Bijou Hills in Brule County, South Dakota. The image below is from the webpage on Jeremiah and Martha Rogers (click here). 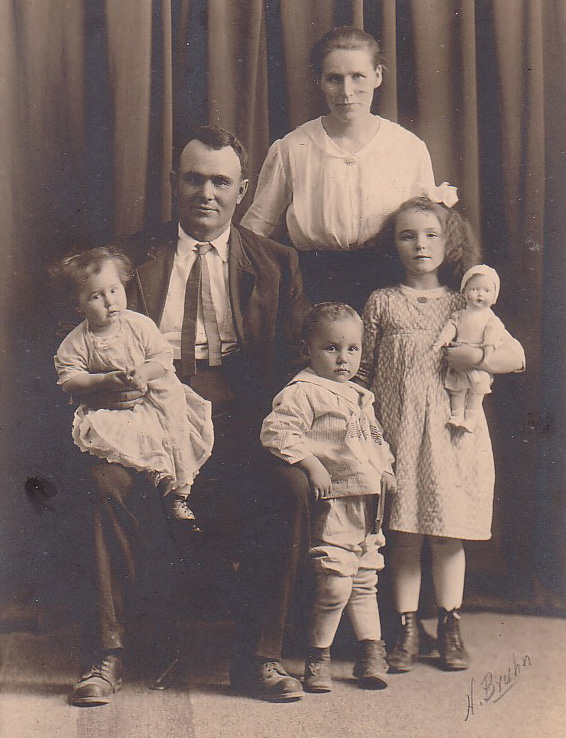 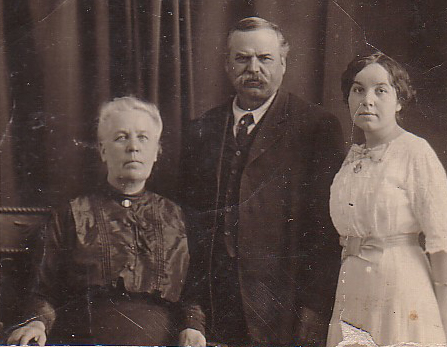 Grace (left) and Maude Cummings are shown below. From Doris Matucha Album B5, p 3. Also from photo collection from Charles Anderson, which identified the two sisters. 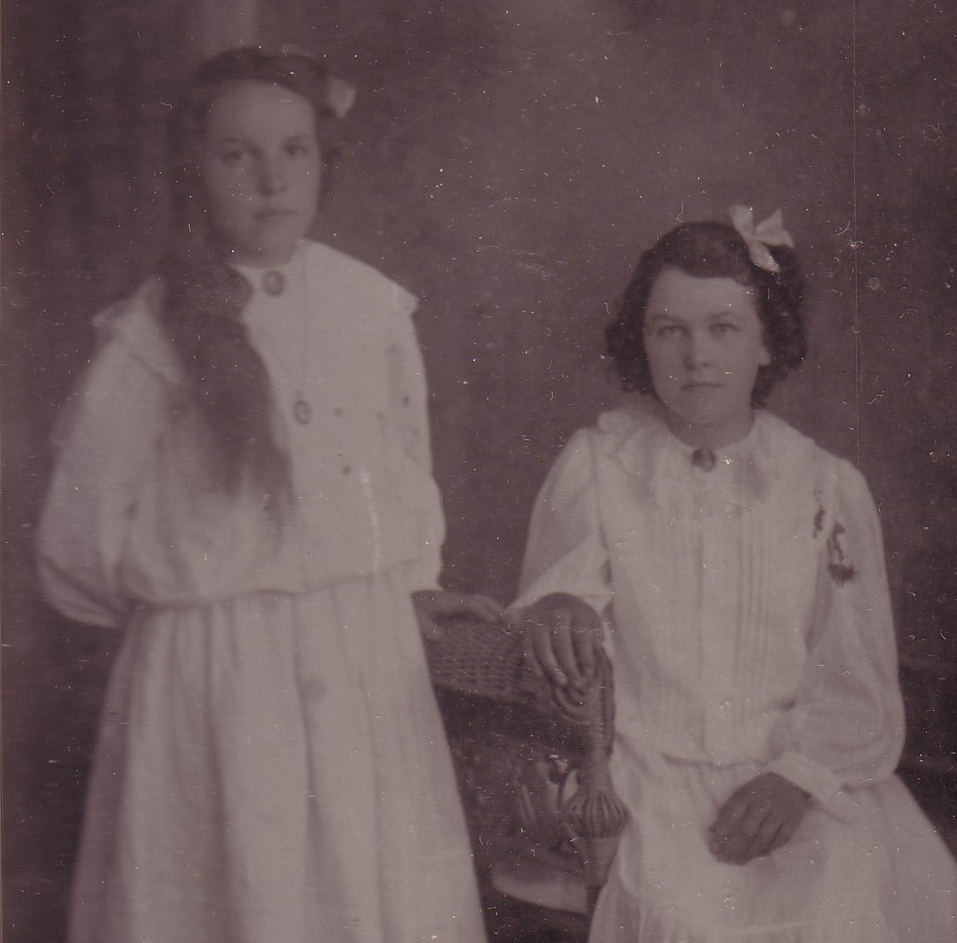 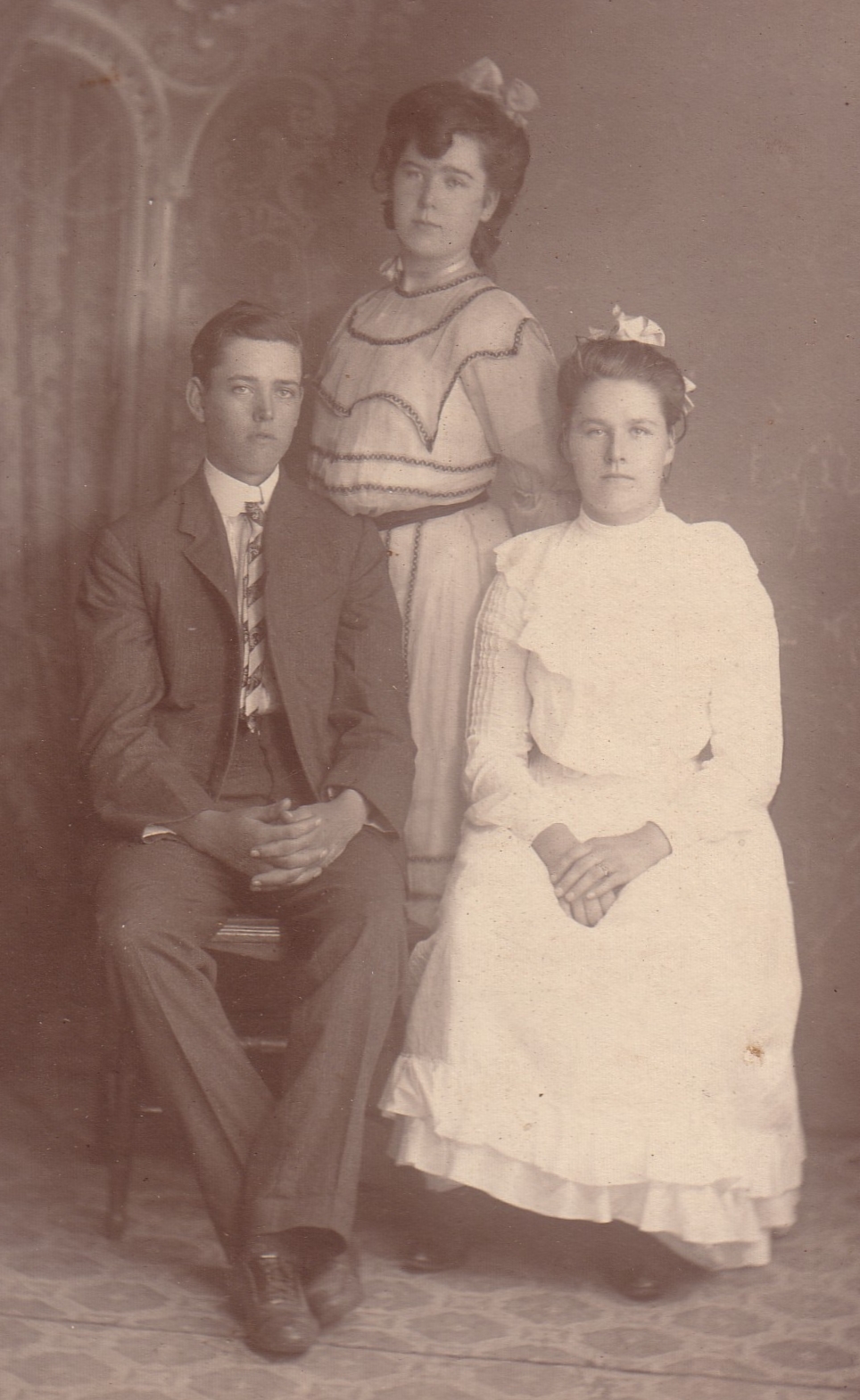 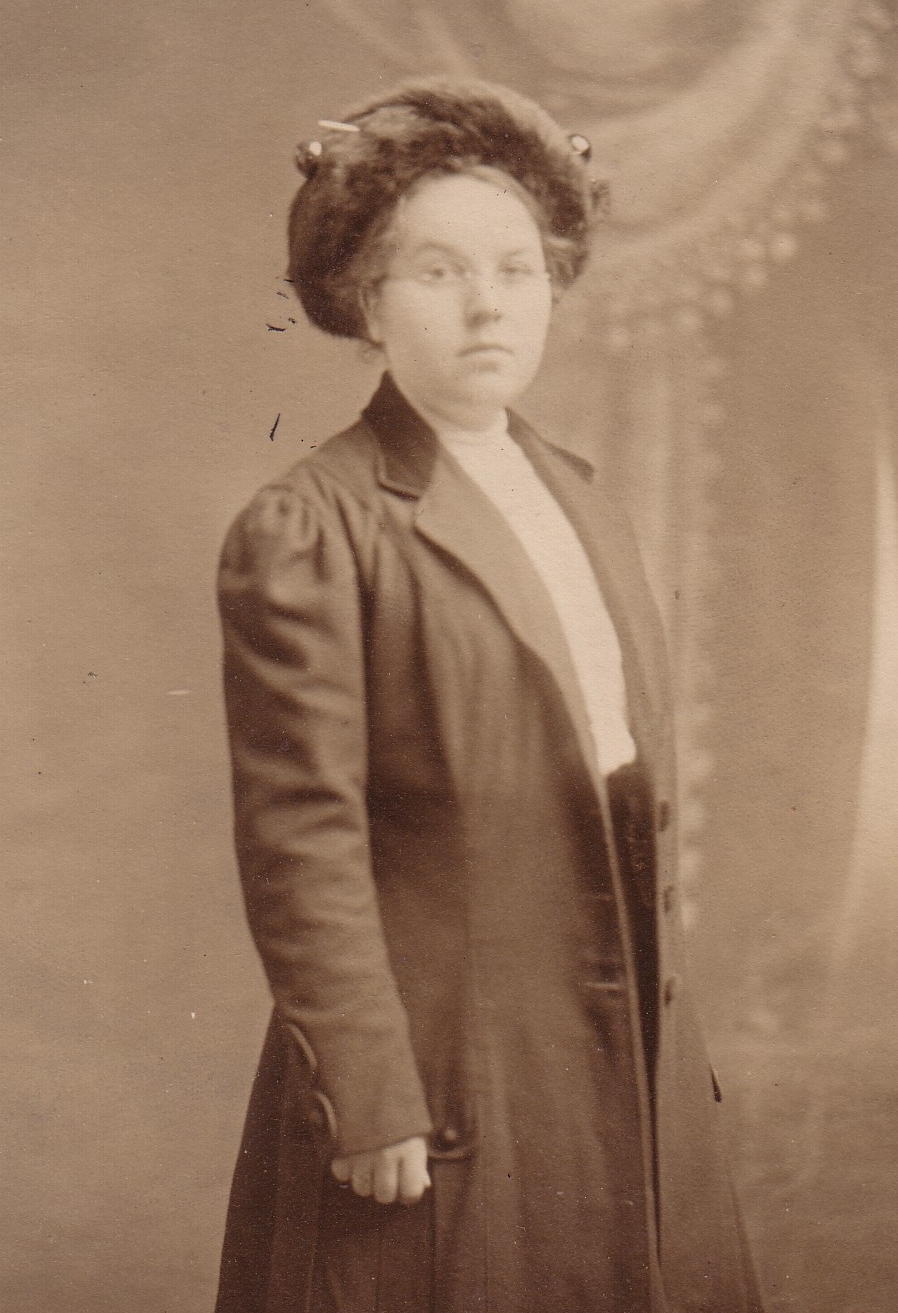 Linnie Cummings, oldest sibling of Bessie Cummings, is shown on the left with her second husband, Amsy Frank. Gertrude Cummings is shown with her husband, Ray Frank, the brother of Amsy Frank. Linnie’s first husband was Lewis Alfred Ellis. Gertrude was Linnie’s cousin and one of two daughters of William Cummings (brother of Charles Austin Cummings). Photo from Charles Anderson collection. 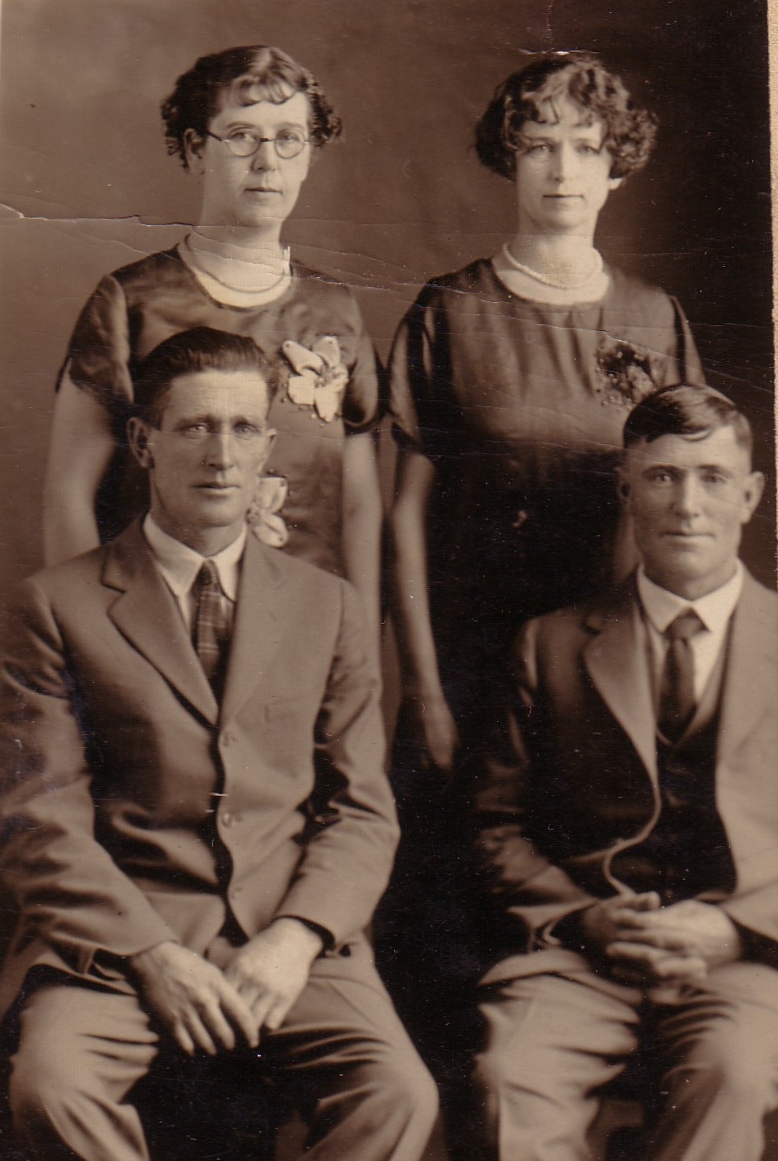 Burt was Bessie Cummings only brother and the second oldest child in the family. Photo from Charles Anderson collection. 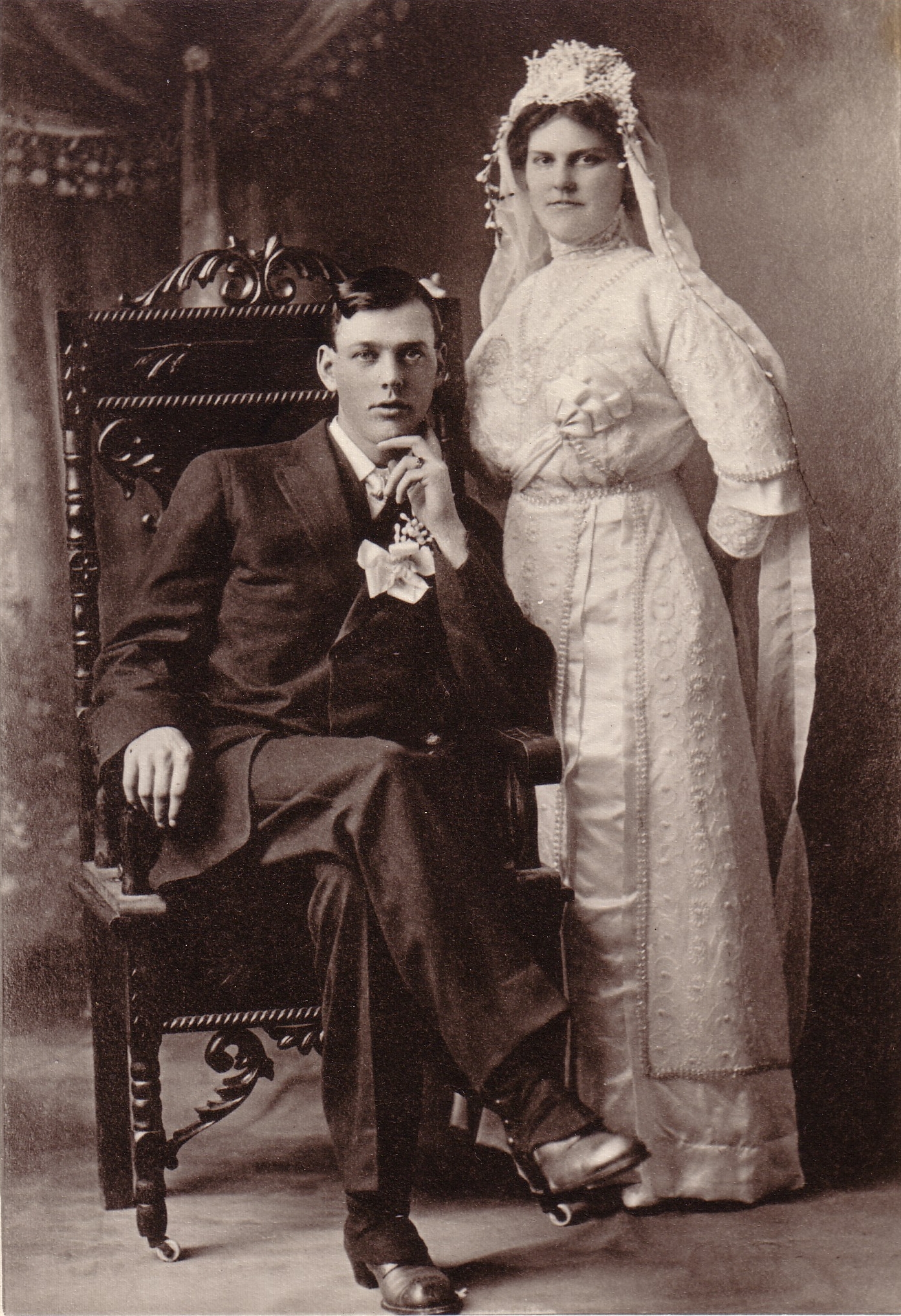 Maude and Arthur were married on May 7, 1913. Their wedding picture is shown below. Maude apparently died young (perhaps in childbirth?), however, and Arthur married her younger sister, Grace Cummings. Photo from Charles Anderson Collection and Ferne Roggow album, “Unnamed Oldest”. 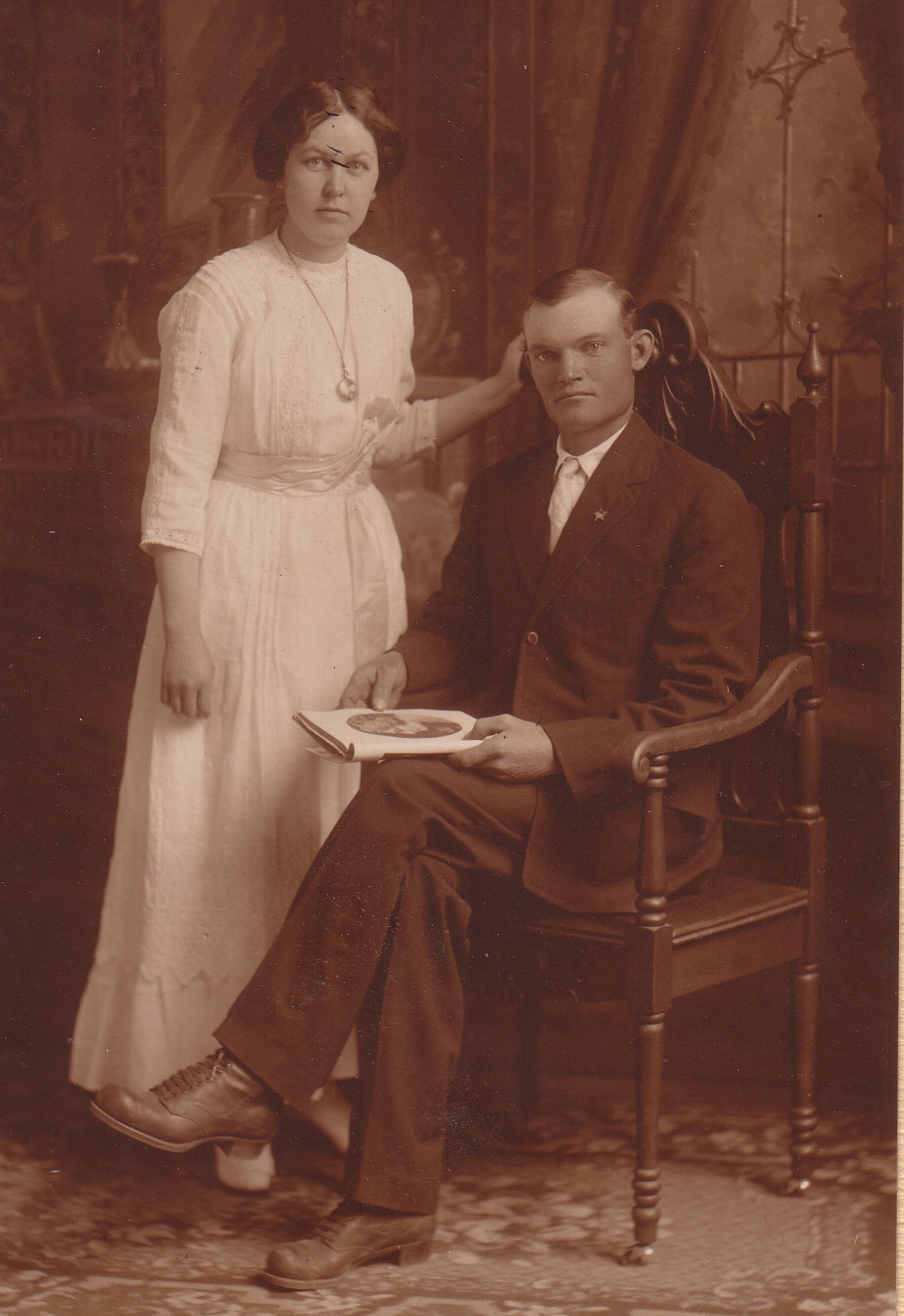 Grace married Arthur Anderson after her sister, Maude, died. They were married on January 16, 1917. Their wedding photo is shown below. From Charles Anderson collection. Also in Ferne Roggow album “Unnamed Oldest”. 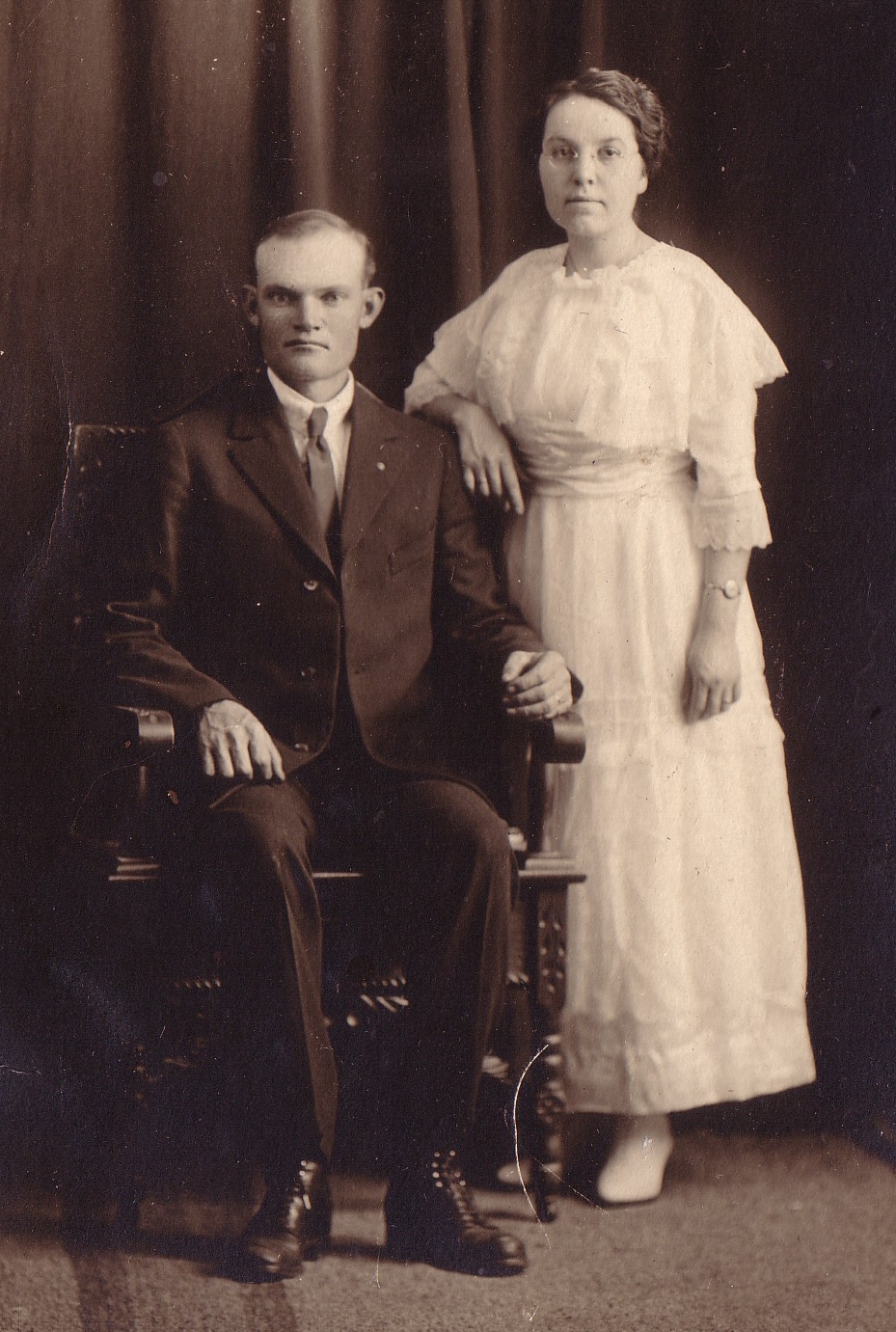 Back row, left to right, are Charles and Albert Anderson, Mr. Saes, husband of Marilyn, and Marilyn Anderson. Arthur and Grace Anderson are seated in the front. Photo from Charles Anderson collection. 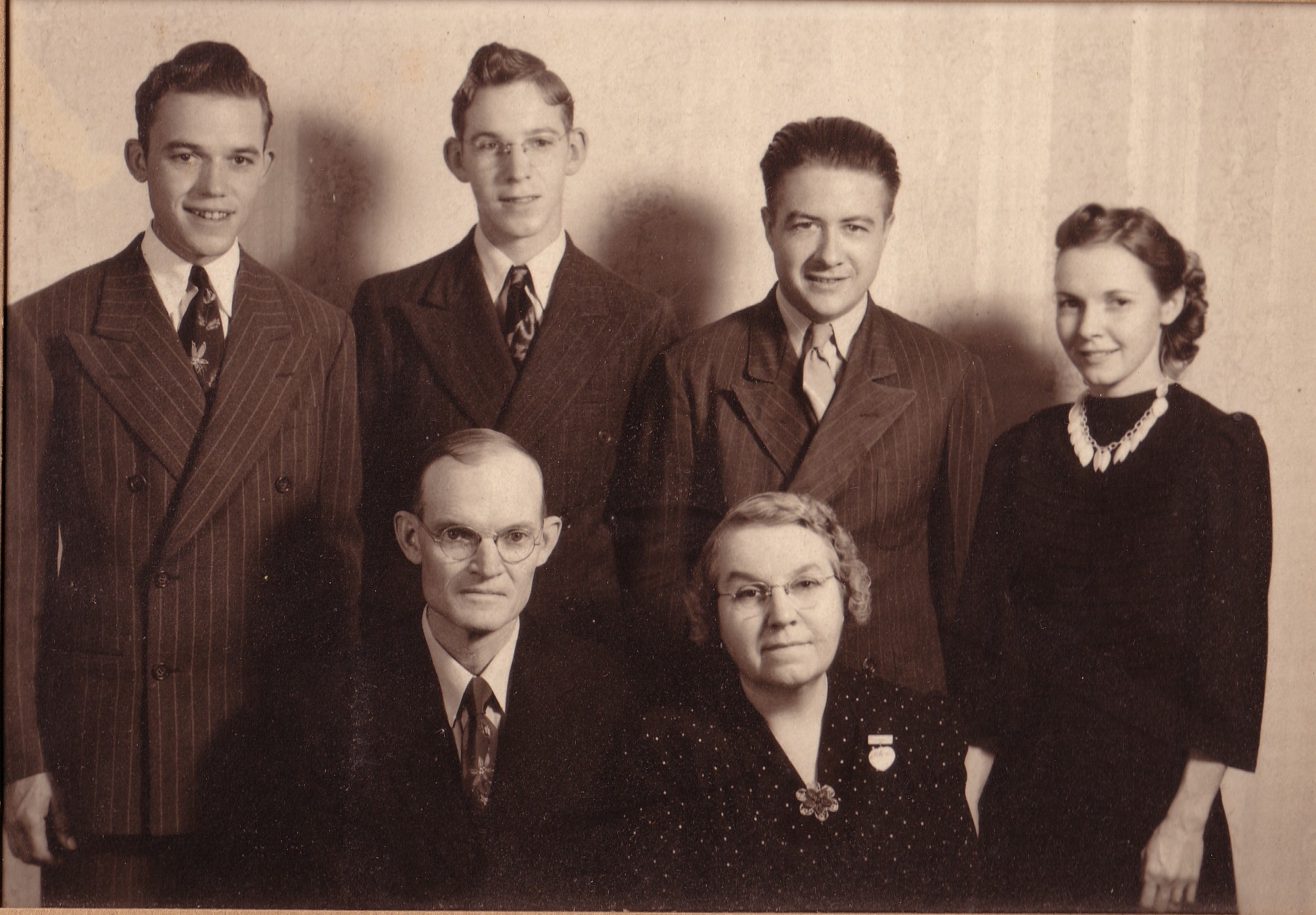 Back row, left to right, are George, Ethel, and Della Lotz and Carrie Cummings. In the front are Eleanor Cummings and Edythe, Jessie B, and Ernest Lotz. Jessie Lotz was Bessie Cummings’ aunt (sister of Charles Austin Cummings). Eleanor Cummings was a cousin, the daughter of George Mortimer Cummings. Carrie Cummings was also a cousin, the daughter of William Cummings. Carrie’s sister, Gertrude Cummings, is shown in a photo above with Linnie (Cummings) Frank. Photo from Charles Anderson Collection. 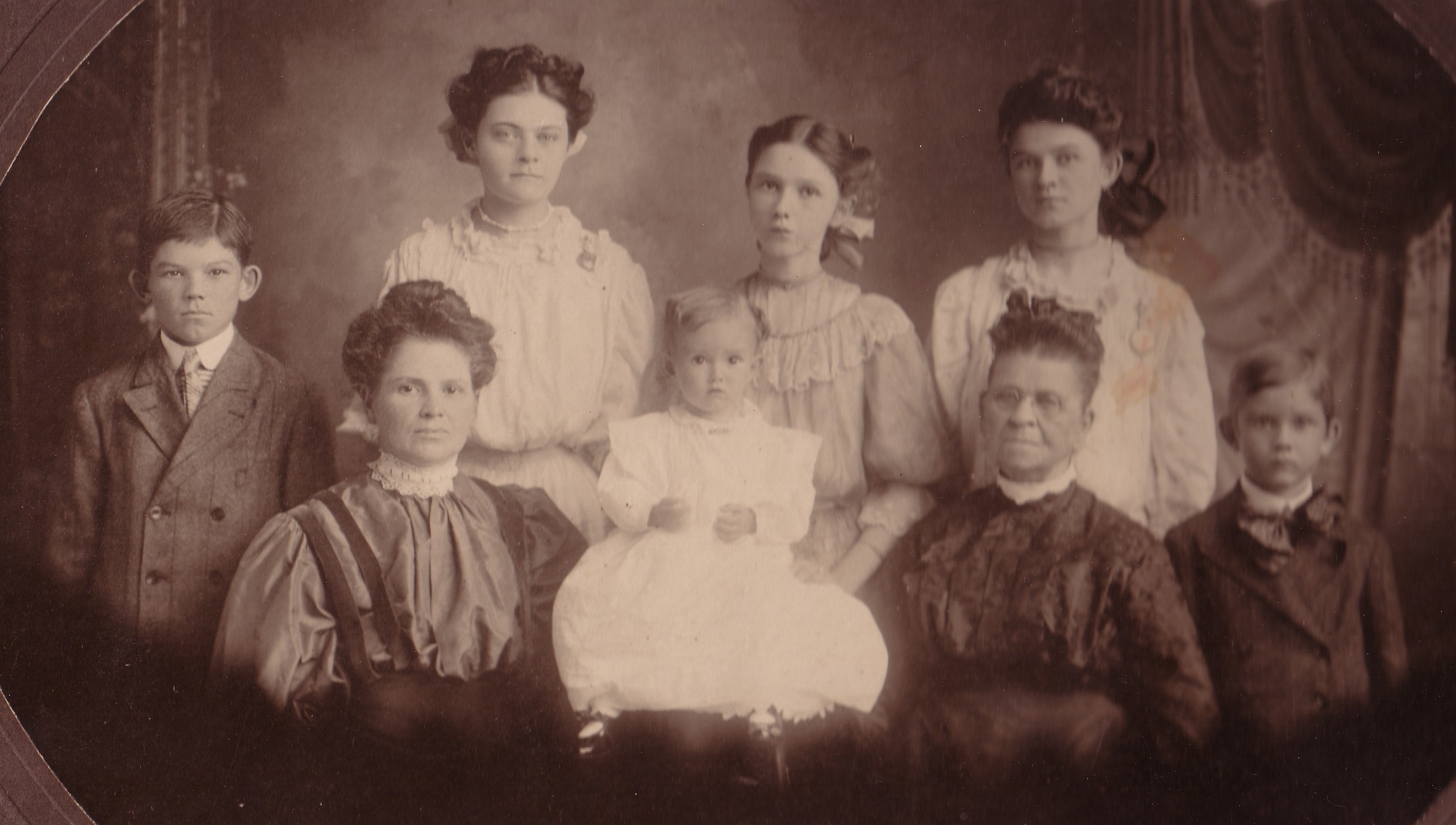 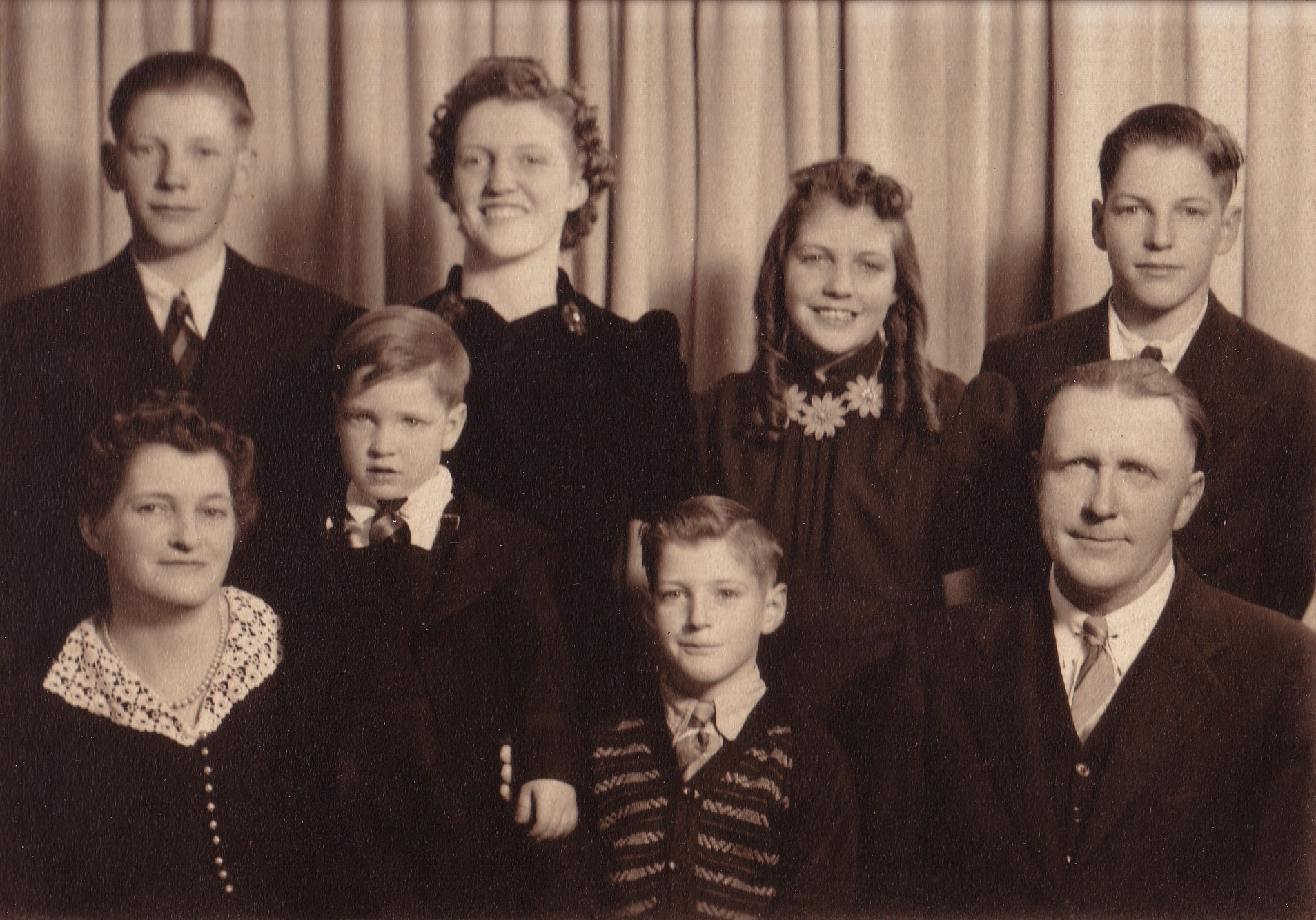 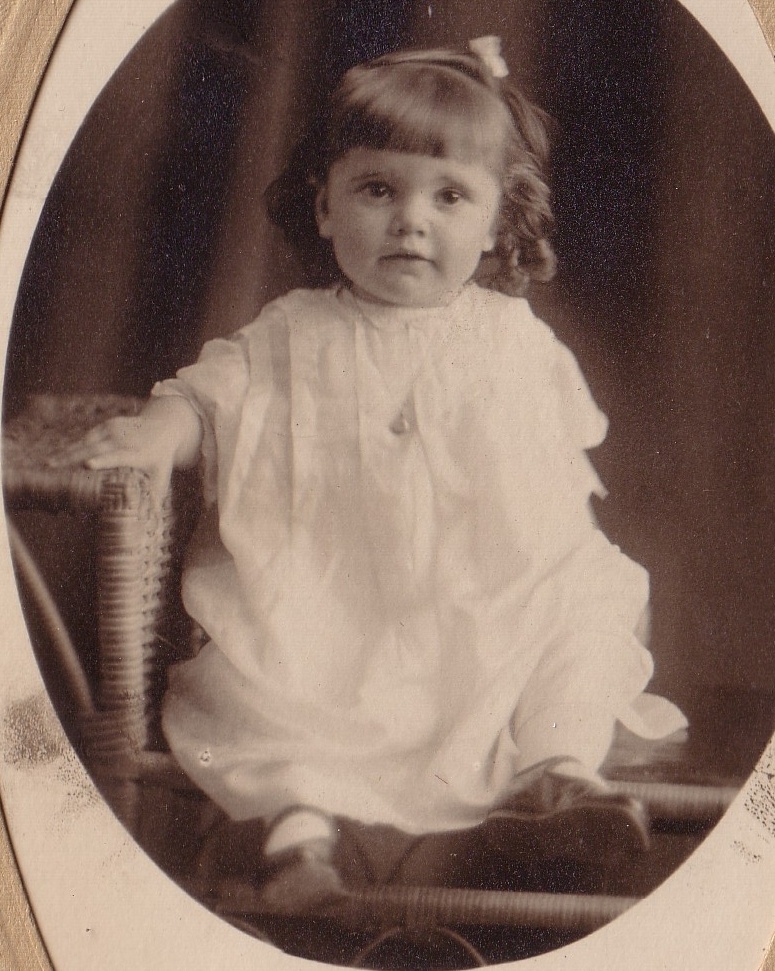