Sydney Grimshaw was born in 1888 in Royton, northeast of Manchester. He and Alice Gertrude Wilcock were married in 1907 in Nelson and had two children, Nancy and Austin. Sometime after the birth of Austin in 1912, Sydney emigrated to America without his family. There he married Louise (Roggermoser) Allen in about 1926; this couple had no children. While in America, Sydney was apparently an inventor, as he received two patents in 1940 and 1941. He moved to New Haven, Connecticut about four years before his death, in 1955, of heart failure. Sydney was descended from the Riley and Margaret (Briggs) family line, which is described on a companion webpage.

Description of Sydney Grimshaw, Born in Lancashire and Died in Connecticut

Sydney Grimshaw with his wife Alice Gertrude in 1909

Where Is Royton, Sydney’s Birthplace?

Sydney Grimshaw was a Descendant of Riley Grimshaw

Thanks go to Mavis Long for providing the information on this webpage. Because of Sydney’s choices regarding his first family in England, the decision to post this information was not an easy one for Mavis…

It is with mixed feelings that I put this piece of research forward for inclusion on the Grimshaw web-site. It presents a sad reflection on the character of Sydney Grimshaw, the grandfather I never knew, and diminishes the value of his successful career.

My sincere thanks go to my cousin Jane who joined me in this research, to my 2nd cousin Shelagh who provided initial background family notes and photographs and to the many kind people who responded to requests for help via Genealogy.com message boards.

The following description of Sydney was prepared by Mavis Long based on her research of him in both England and America.

Sydney went to America in 1913 To his fathers brother. This has to be John William in Cambridge, Massachusetts, as Amos James had died in 1902. His Aunt Margaret H (Mrs West) was also nearby in Somerville. His cousin Albert Harvey, wife Bertha and children, Austin and Catherine were also living there in 1910.

Unlike his American uncles, who were single when they left England, Sydney was married with two children. He chose to desert his wife Alice Gertrude and children, Nancy 4 yrs and Austin 1 yr (named after Sydneys American cousin), when he fled to America, leaving them destitute. Alice Gertrude sold furniture to buy food for her children. In 1922, after years of not hearing from Sydney, she applied to the Courts for a Presumption of Dead order on him. This was granted, she was declared a widow and thus able to legally marry again in 1923  ten years after being deserted.

But  Sydney turned up in England in 1925 to visit his mother and sisters Margaret J, Alice, & Nancy M. He did not visit his wife and children. The memory of his visit to his mothers house in Nelson, Lancashire, remained in the mind of Alices daughter Dorothy, a young girl at the time who remembered the tension, raised voices and angry shouting.

Sydneys name was taboo within the family  not to be mentioned. His children were told he was a bad man. His youngest sister Nancy M, feeling particularly bitter towards him, cut him off family group photographs. The Will of his Aunt Mary Jane stated her estate had to be divided between all her nephews and nieces except my nephew Sydney Grimshaw, clearly naming and excluding him. His son Austin was 85 yrs of age when he saw a photograph of his father for the first time! Grandchildren in England never knew him.

Sydney forged a new life and career in America. He had been a cotton weaver in England but spent his early years in America training to be a Draftsman, exactly where is unknown.

He was in Providence in the early part of 1917 listed as a Draftsman but was working in Boston later that year, when he signed his WW1 Draft Reg. Form, stating he was a Machine Designer. The 1920 census shows he had returned to Providence, again describing himself as a Machine Designer, where he remained until 1927 when he moved to Waterbury, Connecticut. He is listed in the 1931 Waterbury City Directory as a Consulting Engineer. He left Waterbury in 1937 for New Haven, where in 1939 he invented, designed and filed patent applications for two pieces of industrial machinery (full details at the end of this document). He was still there in 1942 when he signed his WW2 Draft Reg. Form.

He moved to North Haven 4 years before his death on 16 September 1955. He is buried in Montowese Cemetery, North Haven. His Will, written 6 weeks before he died, shows that on death he had accumulated assets of $40,976.00, (a house worth$12,000.00, Shares $20,383.00, 1 yr old Car $1,185.00, Bank Accounts $ 6,908.00 and Furniture $500.00). His assets accrued whilst his children lived in poverty – particularly during WW1. The only beneficiary to his will was his 2nd wife Louise Josephine (previously Allen, nee Roggermoser) whom he had married in 1926. There were no children to this marriage. Even when facing death, a time for reflection and repentance, he had no thoughts for his children in England. Louise sold their home one month after his death and returned to Providence.

Following are copies of his first Marriage Certificate, his Death Certificate, Will, and technical drawings of the two pieces of industrial machinery he invented.

Shown below is a photo of Sydney with Alice Gertrude Grimshaw in 1909, about two years after their marriage in 1907. The photo is extracted from a larger group photo, which is provided on the webpage on Riley and Margaret (Briggs) Grimshaw. 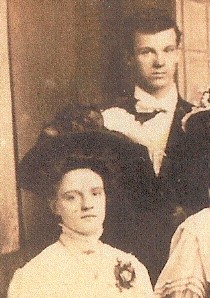 The marriage of Sydney and his first wife was recorded on their marriage certificate, an image of which is shown below. 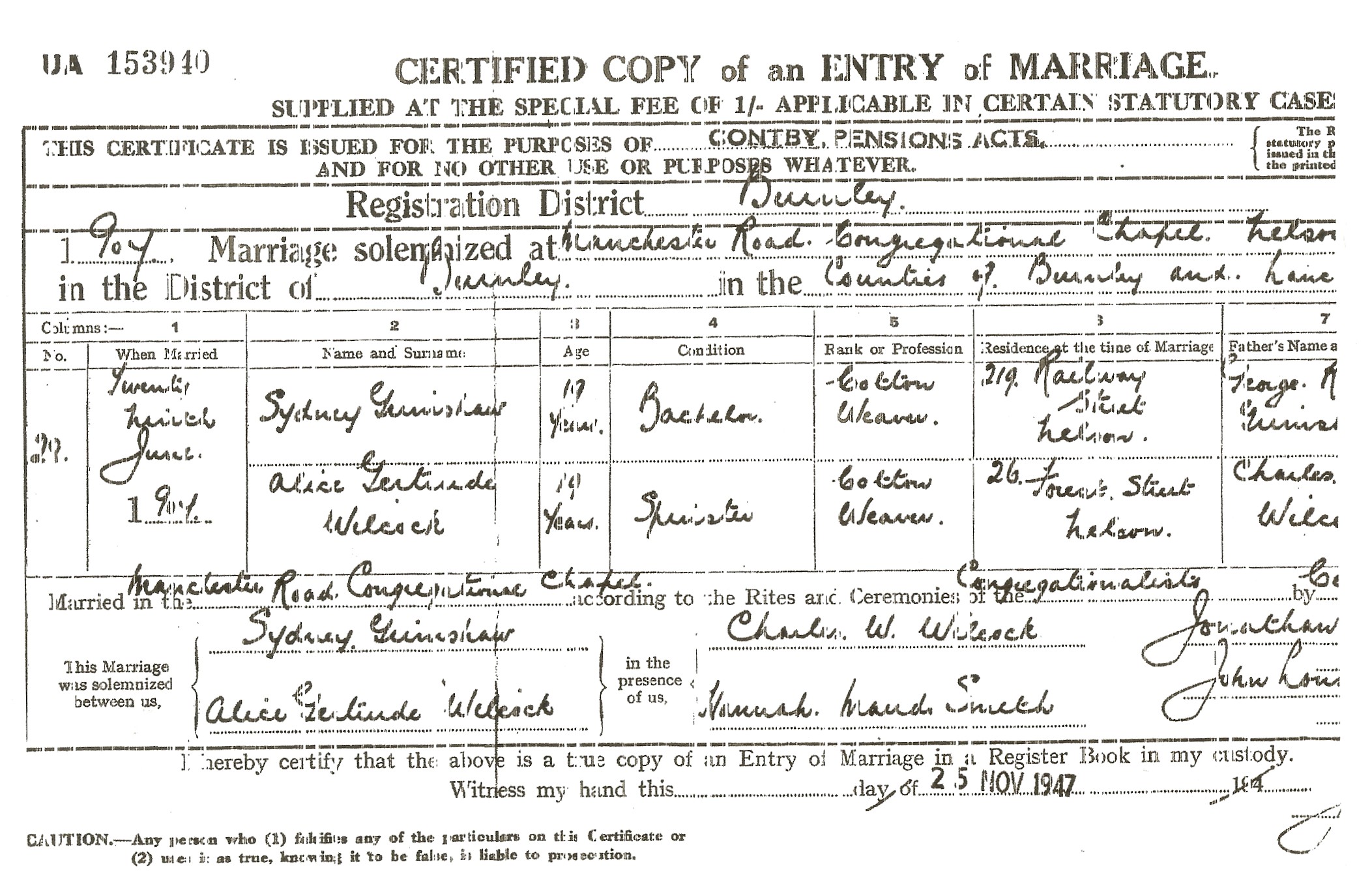 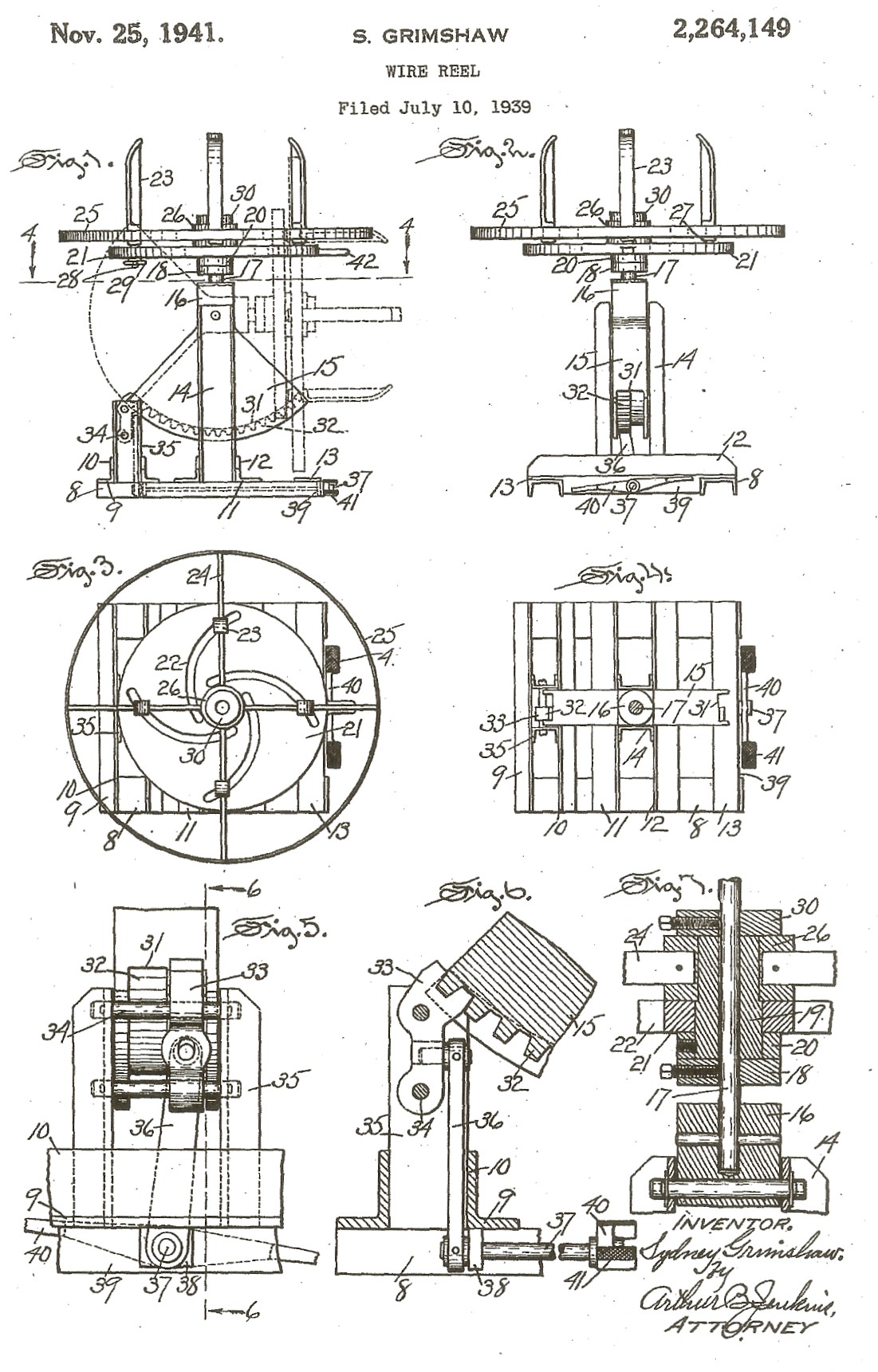 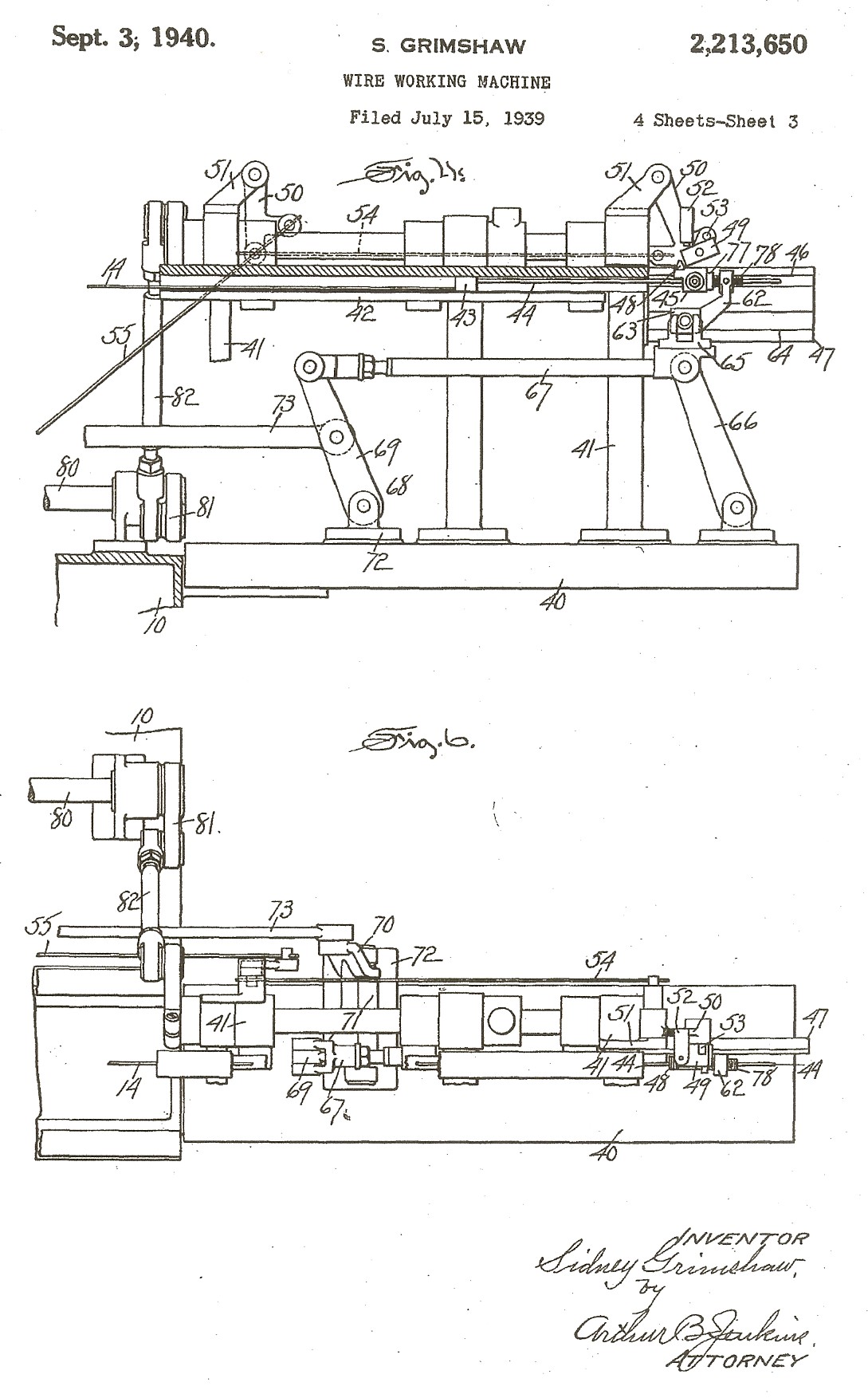 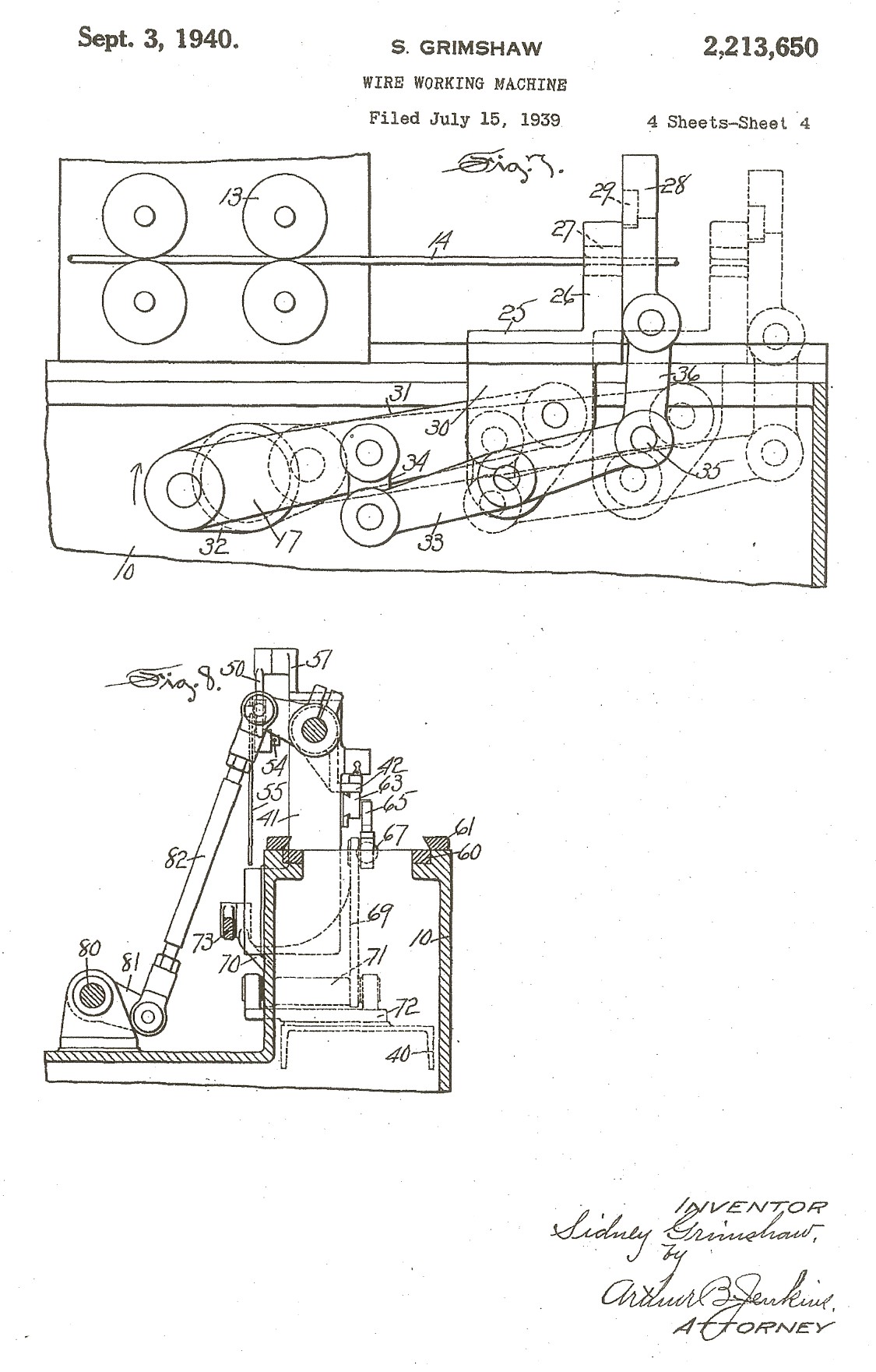 The Connecticut death certificate recording Sydney’s death on September 16, 1955 is shown below. 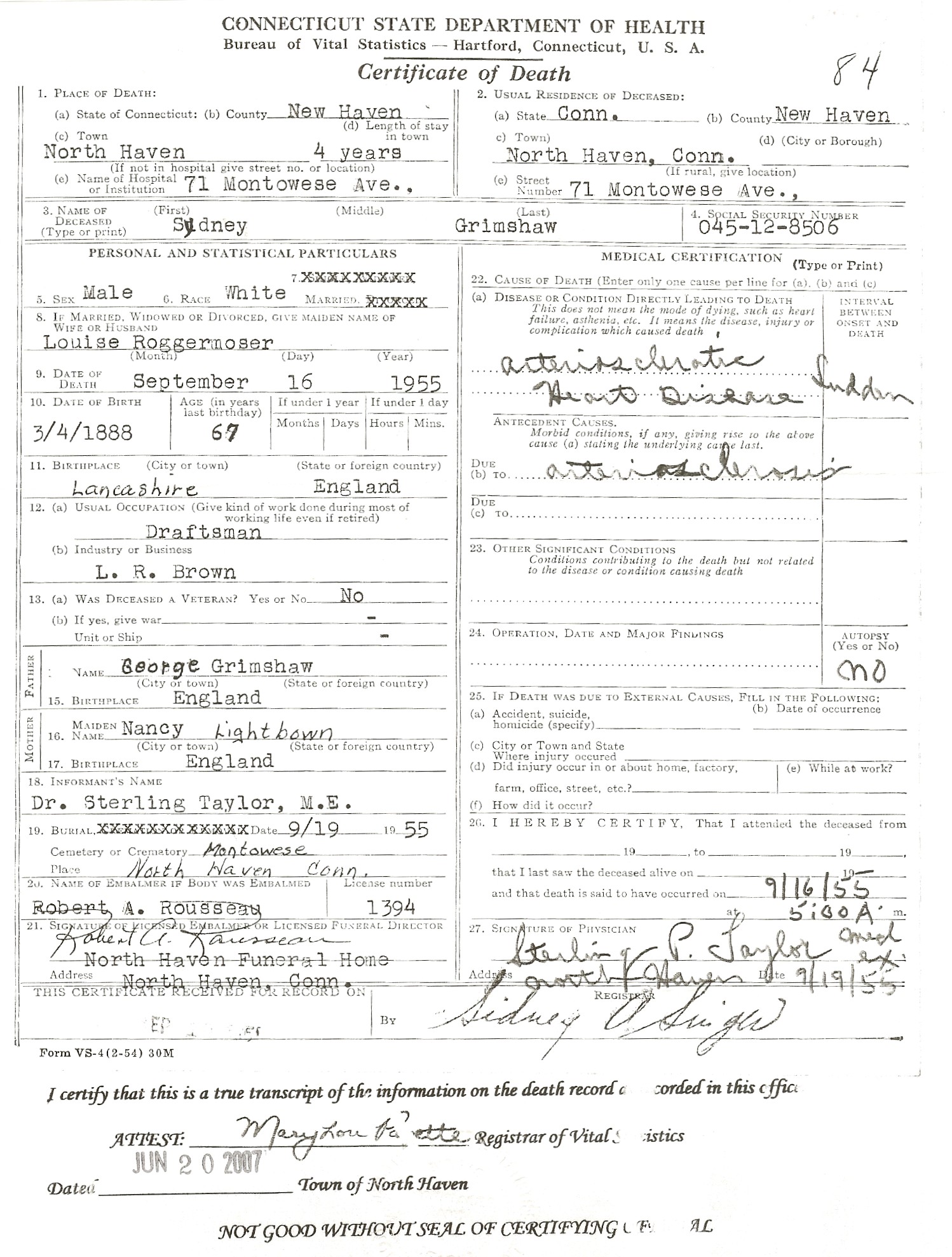 The probate court record for Sydney is shown below. 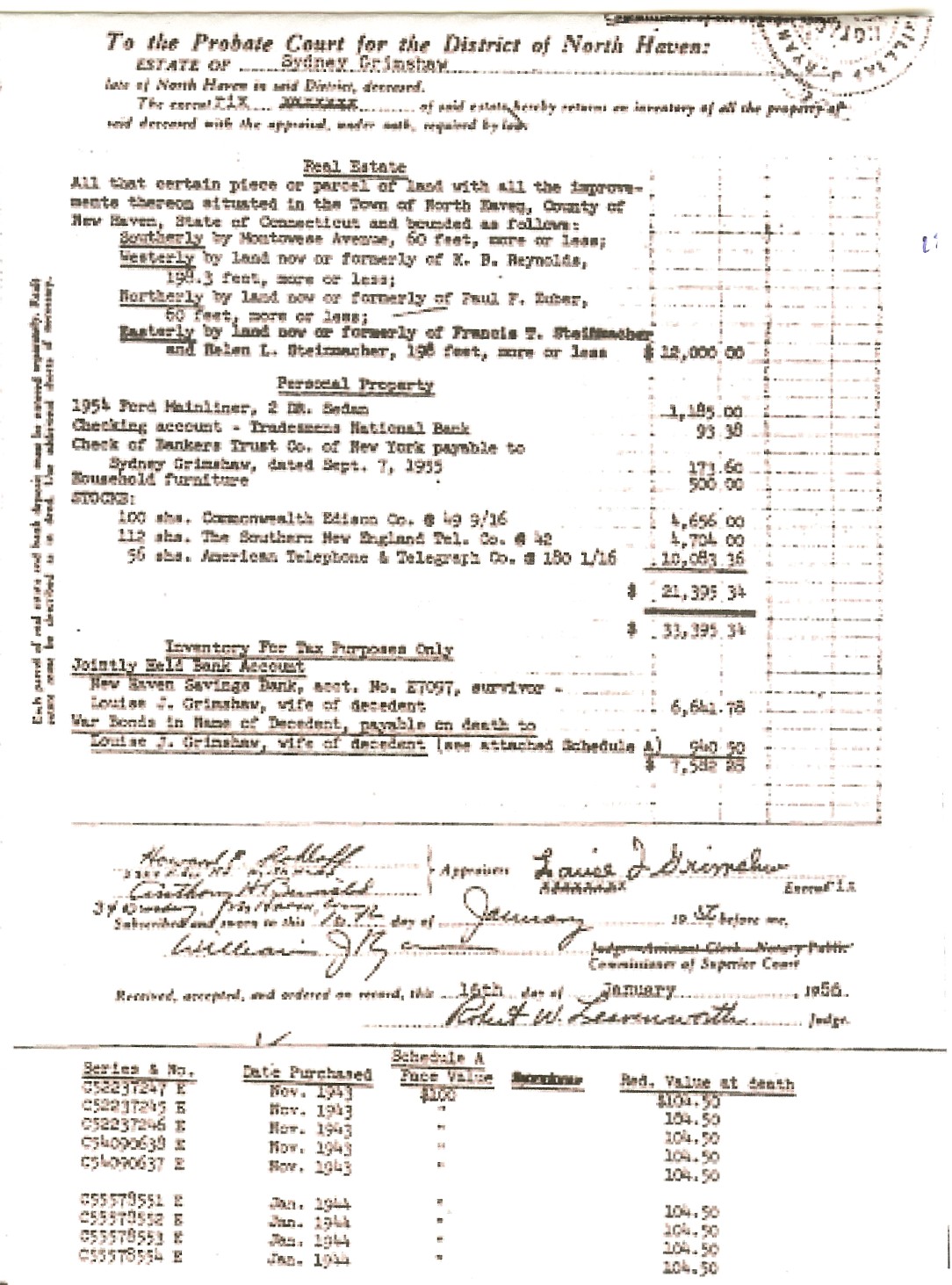 A map from the Ordnance Survey’s “Get-a-Map” showing the location of Royton northeast of Manchester (note the pink circle) is shown below. 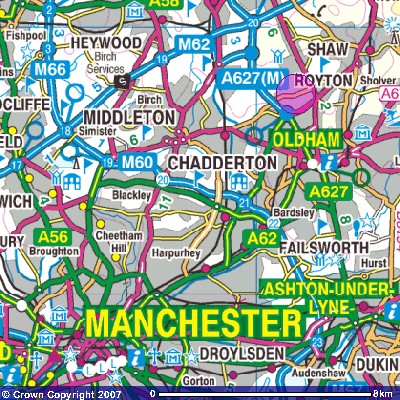 Sydney Grimshaw was the grandson of Riley and Margaret (Briggs) Grimshaw. They are described on a companion webpage. A descendant chart for Sydney, derived from a more expansive version on Riley and Margaret Grimshaw’s webpage, is provided below.