Isaac Grimshaw was born in about 1770 in England. He and Hannah Worrall weremarried in 1794 in Bradfield, Yorkshire, so Isaac was probably descended from the Edward and Dorothy (Raner) Grimshaw family line, although the link has not yet been clearly established. The couple immigrated to the U.S., arriving in Philadelphia on the ship Sally on March 22, 1805. By 1807 they were living in New York City, where Isaac was a school teacher for several years. Isaac appeared in local newspapers as a point of contact for a clothes-washing machine invention and for the sale of land tracts in 1807 and 1816, respectively. The 1810 U.S. Census found five men and two women living in Isaac Grimshaw’s household.

Isaac was listed in the newspaper in 1817 as an “insolvent”, and a subsequent notice indicated he had been in jail for at least 60 days and asked for anyone to show cause why, by March 6, his estate should not be “assigned” due to insolvency. Apparently the family lived out their lives in New York.

Record of Marriage in Bradfield, Yorkshire

Grimshaw Immigration Records of Isaac Grimshaw Entry into the U.S.

Images of Isaac Grimshaw Entries in the 1810 U.S. Census

Philip Brown posted the following message on the Grimshaw Family Genealogy Forum in May 1998:

The following record of Isaac and Hannah Grimshaw’s marriage was found on FamilySearch.

Isaac and Hannah Grimshaw apparently immigrated through the Philadelphia port in 1805, but settled in New York City. The evidence for this can be found on the companion webpage on Grimshaw Immigrations; the two records are reproduced (with minor modifications) below:

Isaac was recorded in Tepper and Bentley1 as arriving at the Port of Philadelphia based on lists of baggage kept by the Port. The record indicates that Isaac arrived on the ship “Sally” on March 22, 1805 (Tepper, 1986, p. 278):

The authors make several observations on the Philadelphia baggage list records, their origin, and their uniqueness (Tepper, 1986, p. vii-xiv):

Until the year 1820 federal records of immigration were virtually non-existent, with the curious exception of the “baggage lists” which were maintained by officials of the port of Philadelphia from 1800 to 1820. A small number of records developed at other levels of government or outside of public authority are known to exist for portions of the 1800-1820 period. Of all the known records of immigration for this period, however, only the Philadelphia baggage lists exist in any significant quantity or make any claim to continuity.

Although they are sometimes confused with Customs Passenger Lists (lists of passengers kept at various ports of entry after 1820 as a result of legislation approved in March 1819 regulating conditions on passenger vessels), baggage lists are an entirely different type of passenger record, owing their origin in fact to an earlier and rather unlikely piece of legislation, the Act to Regulate the Collection of Duties on Imports and Tonnage, approved 2 March 1799.

Unlike Customs Passenger lists, which are an outgrowth of legislation framed for the purpose of placing controls on immigration, baggage lists originated from an act that had no bearing on immigration other than the benign intention to exempt in-coming passengers from paying duty on their personal belongings. Section 23, the comparatively obscure but key section of the act of 2 March 1799, instructed ships captains to draw up cargo manifests with the names of passengers carrying baggage, directing them to

have on board a manifest, or manifests, in writing, signed by such master or other persontogether with the name or names of the several passengers on board the said ship or vessel, distinguishing whether cabin or steerage passengers, or both, with their baggage, specifying the number and description of packages belonging to each respectively.

Having briefly considered the statutory basis for the creation of the baggage lists, it must now be confessed that Philadelphia was virtually alone in complying with the law, for with the exception of a small number of baggage lists found among the records of the New Orleans customs district  spotty lists for 1813 and 1815  and the district of Alexandria, Virginia (more haphazard even than New Orleans), no other port of entry on the Atlantic or the Gulf appears to have maintained the specific type of records called for in section 23 of the lengthy and complex act of 2 March 1799. Nor was Philadelphias compliance with the law random or equivocal, judging by the fact that port officials collected baggage lists from as many as twenty ships in the somewhat early period of October to December 1799, and thereafter collected lists from an average of 238 ships per year for the twenty years from January 1800 to December 1819.

Whatever the reasons for their existence, the Philadelphia baggage lists are not only unique but also very singular in character Typically no more than a handful of passengers are named in each list, although longer lists of fifteen or twenty passengers are found, and there are even a few manifests containing as many as two hundred names. Nevertheless, with approximately 40,000 passengers recorded in the 4,767 ship lists for the twenty years from 1800 through 1819, an average of between eight and nine passengers per list gives perhaps a better idea of their range.

Another entry on the same companion webpage on “Grimshaw Immigrations” is as follows.

According to Scott2 (p. 123), Isaac Grimshaw registered as a British alien during the War of 1812. His entry appears as follows:

The 1810 U.S. Census found Isaac and his family living in New York Township of New York County, New York. The image is shown below, with the number of male and female members of the household. The age categories for males and females are as follows: less than 10 years old, 10 to 15, 16 to 25, 26 to 44, and 45 or older. Two additional columns are for “All Other Free Persons” and “Slaves”.

The following posting regarding Isaac and Hannah Grimshaw was found on a website for the “Worralls from Ughill”.

Hannah Worrall was the sister of Henry Worrall of Ughill and New York. She married Isaac Grimshaw in 1794 at Bradfield. They emigrated to the USA in 1805 staying first at New York, then moving for a short time to Philadelphia, before returning to New York around 1812. They were still there in 1820. In the USA, Isaac Grimshaw became a teacher. They clearly stayed in touch with Henry Worrall, but apart from that we knew little about what they did in the USA.

The following just turned up in the records of Cambridge University Library (UK), and I am told that a copy is also in the University of Connecticut at Storrs:

“Tables and Explanations necessary to be got by Heart by every Pupil studying Arithmetic” written by Isaac Grimshaw, New York, 1815.

So Isaac Grimshaw must have been a teacher of mathematics in New York.

Cambridge University would not let me see their copy! I wonder what else Isaac Grimshaw might have published. 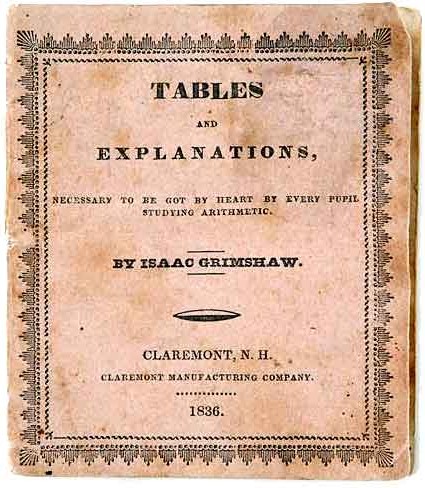 Well, here’s a recent find about Isaac and Hannah’s children…what was a speculation looks now to be true.

Thomas and Angelina died in infancy

Their children were: no dates of birth recorded
Worall
Charlotte
Raymond
Helen

The following branches were added at a later date

Not necessarily in that order:)

This was an adendum that Susan added:

The Masons: Issac Mason and his wife came to New York from Dephford, England. about the year 1800. Eleanor Mason died 1817 and Issac 1818. Both are buried in St.Pauls churchyard in downtown. New York.

I will continue to explore the branches not followed in the early part of the tree and the new buds at the bottom of the tree:) Hope everyone finds some joy in the following of the family.

A preliminary descendant chart for Isaac and Hannah Grimshaw can be constructed based on the information found for this webpage.

Isaac and Hannah Grimshaw lived on White Street, which is near the south end of Manhattan Island.

Location of White Street (red “A”) near the southern tip of Manhattan.

The following notice of Hannah’s death was found on Ancestry.com with the title “Hannah (Worrall) Grimshaw, 5 Jan 1834 NYC, 494 Pearl”. Unfortunately, source information is not provided with the image.

3Grimshaw, Isaac, 1815, Tables and Explanations – Necessary to Be Got by Heart by Every Pupil Studying Arithmetic: New York, Richard Scott, ca 23 p.