Grimshaw Lake is located in Inyo County, California near the small community of Tecopa in the Mojave desert. The lake is named after Edwin Lewis Grimshaw, who created the lake by building a dam on a hot-spring-fed stream flowing out of the Tecopa Mountains. Edwin married Minnie (Bacon) McQueary, who had previously been married (to Frank A McQueary) and had several children. They were apparently married in Los Angeles in 1936, and by 1944 the couple had moved to Tecopa, where Ed leased a trading post and bar. Ed was an avid duck hunter and created the lake to attract ducks to the area for hunting. Ed and Minnie lived out their lives in Tecopa and are buried in the cemetery of that community. They apparently had no children.

Edwin Grimshaw’s ancestry has been traced back to Jonathan and Eliza (Topham) Grimshaw, who immigrated to the U.S. as Mormons from Lancashire to Salt Lake City (see companion webpage). However, Jonathan lost his faith in Mormonism and left Utah to return to England, but only made it as far as Missouri, where he and Eliza lived out their lives in Jefferson City and are buried there. Edwin was the grandson of Jonathan and Eliza Grimshaw; his parents were Jonathan Topham and Nannie (Major) Grimshaw. Ed Grimshaw’s ancestry has been traced nine generations back to the early line of Edward and Dorothy (Raner) Grimshaw in Yorkshire (see companion webpage).

Ed Grimshaw Information, Including Creation of Grimshaw Lake (or Marsh)

Thanks go to George Murphy for providing much of the information on this webpage, including identification of Edwin Grimshaw as the person who created the lake and for whom it is named.

The U.S. Bureau of Land Management has posted an excellent picture, shown below, of Grimshaw Lake with its desert and mountain setting. Grimshaw Lake is in the foreground of the photo. 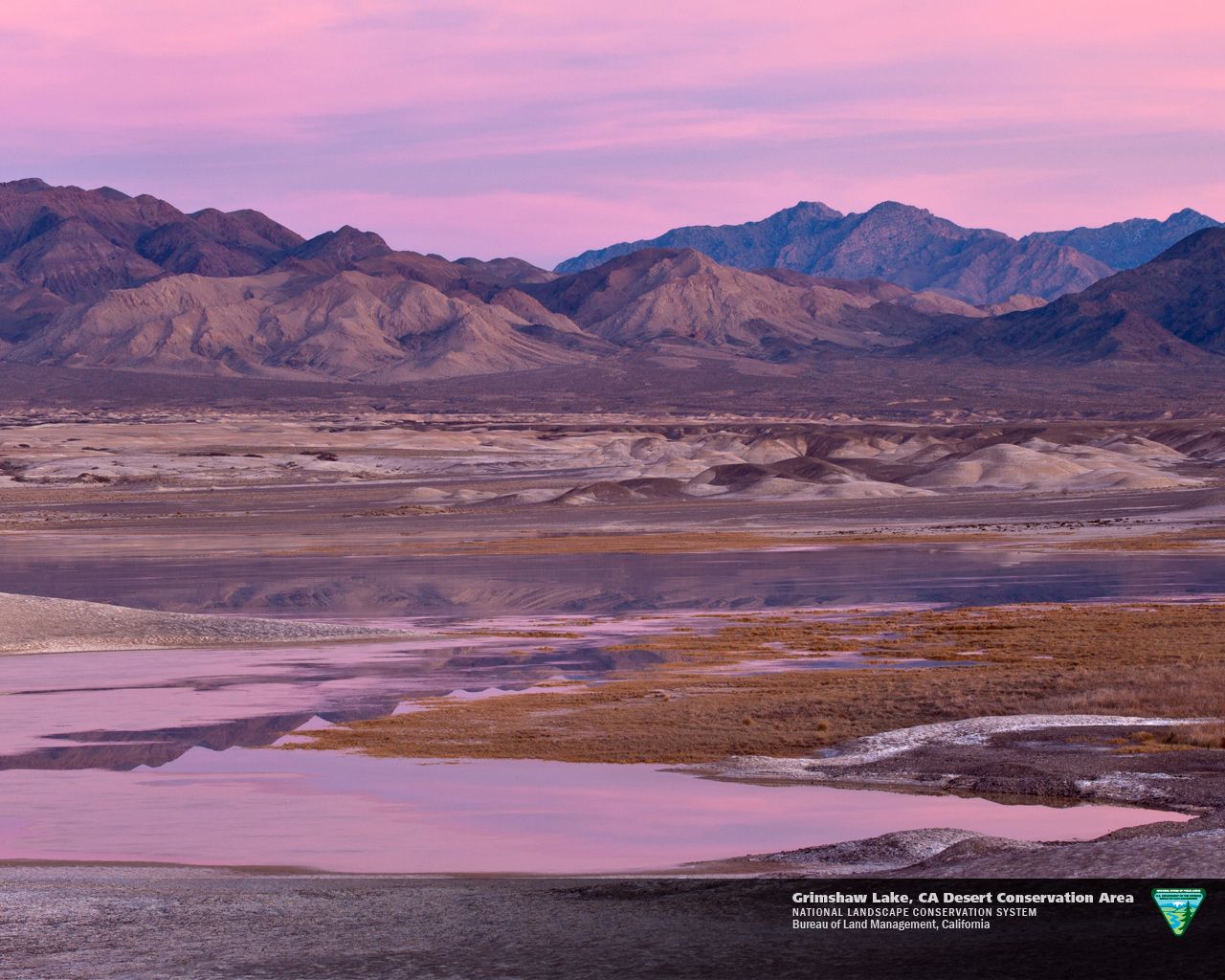 A pamphlet entitled “Remembering the Early Shoshone and Tecopa Area1” includes a a brief description of Ed Grimshaw and the origins of Grimshaw Lake; the description is excerpted below (p. 243).

On page 231 of the same pamphlet, a group photo showing Ed Grimshaw and his stepson, Frank McQueary, is presented. A portion of the picture showing Ed and Frank (#7 & #6) is shown below with part of the photo caption. 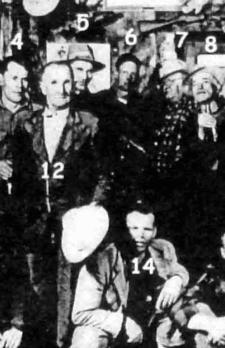 The photo of Ed and Minnie shown below is from Ancestry.com courtesy of George Murphy. 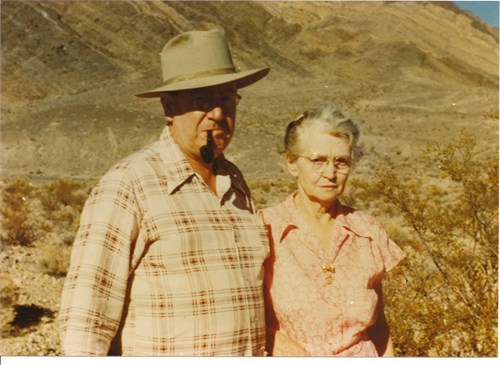 The following photo of the Tecopa Trading Post is from the same source.

The photo below, also from the same source, is the second Tecopa Trading Post, which was built in late 1949 or early 1950 by Ed Grimshaw after the first one burned down.

The maps below show the location of Grimshaw Lake in relation to the Tecopa Mountains and the community of Tecopa as well as Tecopa Hot Springs. The lake name is erroneously shown as “Grimsham Lake”. The lake was formed by damming a small stream where it flows across the “Old RR Grade”. The maps show a hot spring near the head of the stream, at the south end of the Tecopa Mountains. The road running north-south on the east side of the lake is California Highway 127. 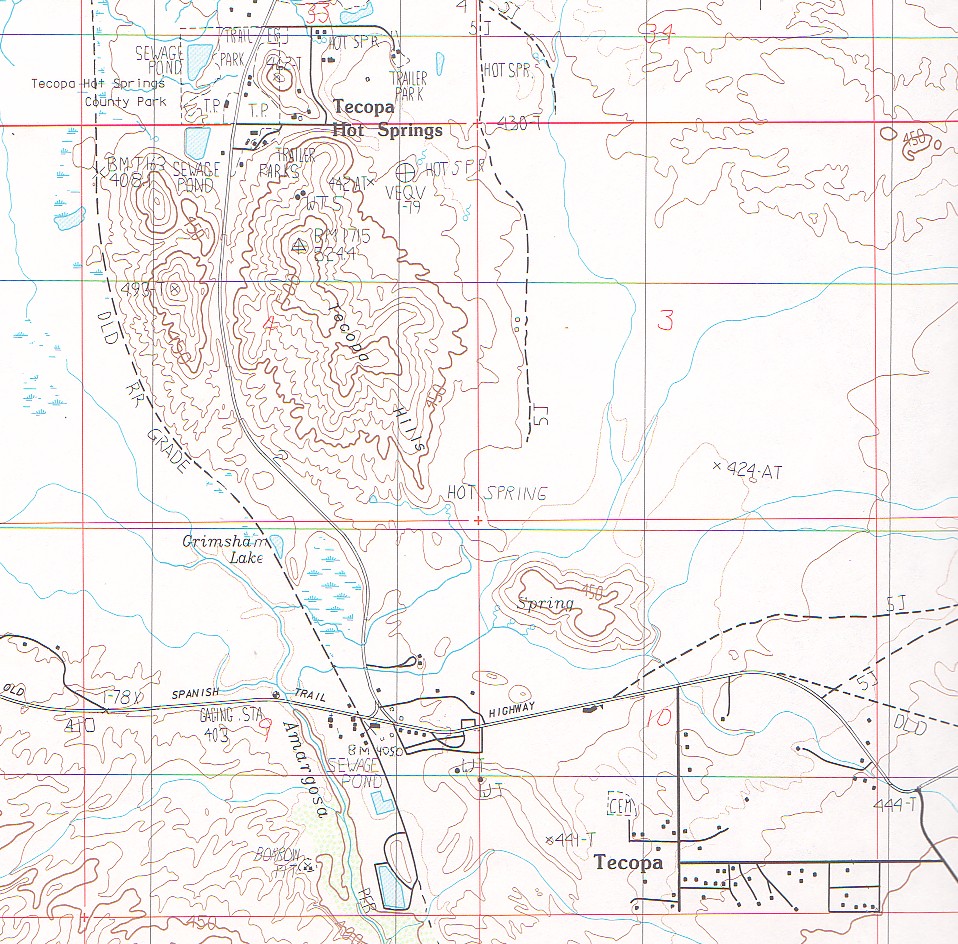 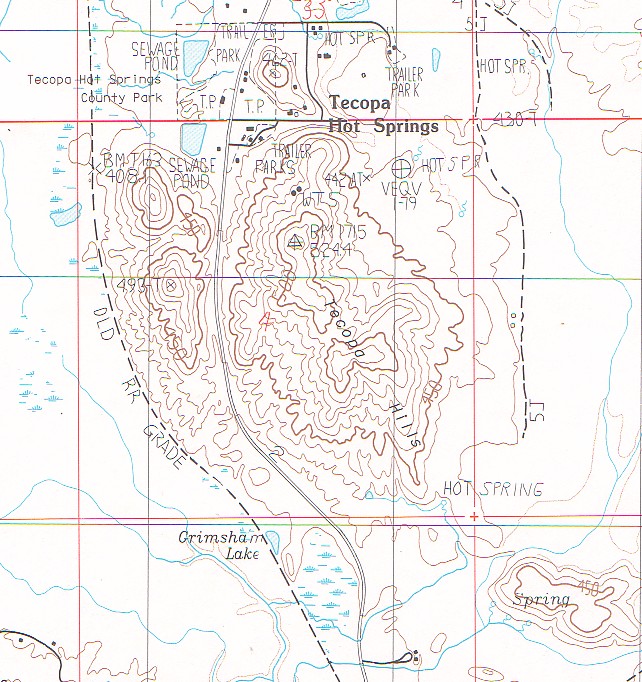 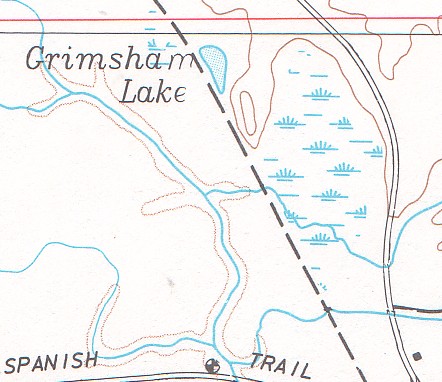 Grimshaw Lake as it appears on a GoogleEarth image is shown below.

The lake as it appears in relation to Tecopa on GoogleEarth is shown below.

Edwin is descended the Yorkshire line of Grimshaws, with Edward and Dorothy (Raner) Grimshaw as progenitors. This line is presented in brief form below and is described in considerable detail in a companion webpage.

Ed and Minnie Grimshaw lived out their lives in Tecopa and are buried in the community cemetery there. Their graves and photos of the cemetery are shown below. 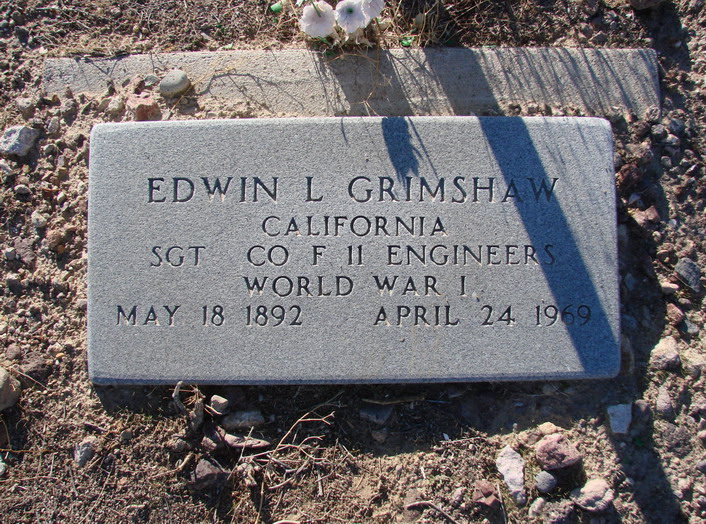 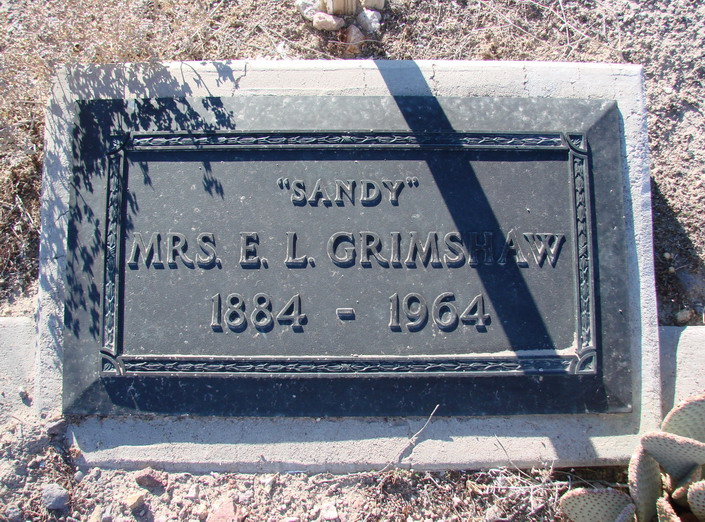 Source for the two photos above: http://www.findagrave.com/ 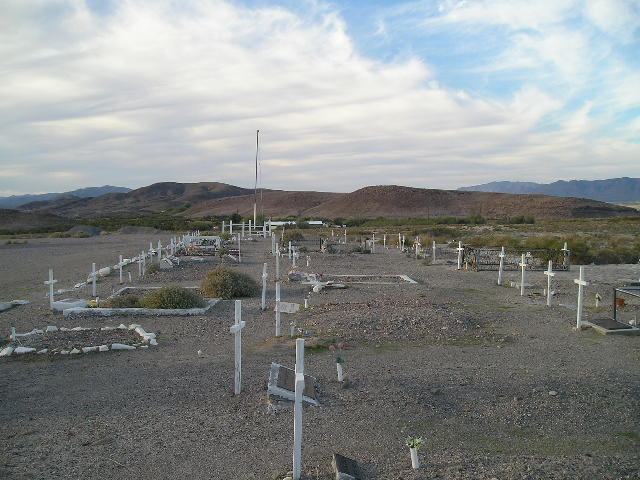 Source for the photo above: http://newcosoheritagesocietyinc.org/tecopa_cemetery.aspx

“Jennifer F” has posted several excellent photos on Gather.com. They are shown below with her informative annotations.

“On the road into Tecopa Hot Springs, you pass the beautiful Grimshaw Lake Natural Area.”

“Fantastic mud hills that rise up into fun shapes extend as far as the eye can see.” 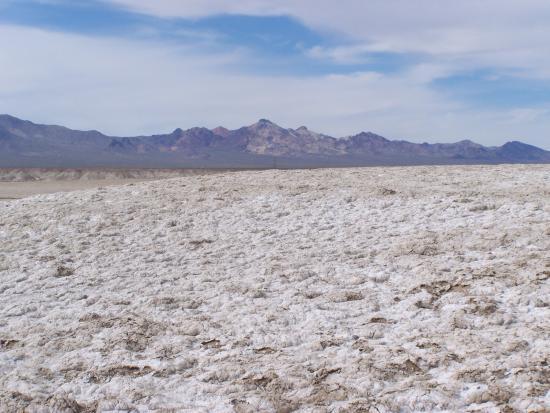 “Located at an elevation of 1,325 feet, this area is somewhat cooler than Bad Water in Death Valley National Park, which is at 282 below Sea Level is one of the hottest places on earth.  The Grimshaw Mud Flats look very similar to the Bad Water area.” 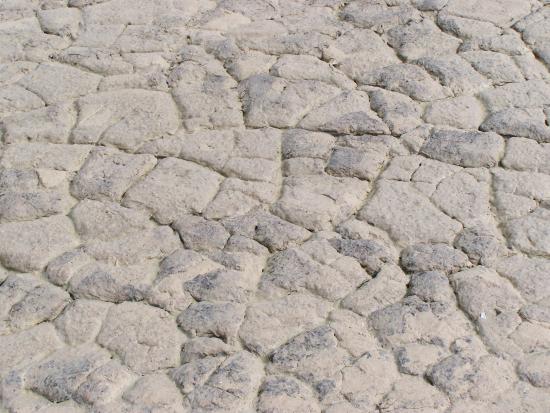 “Because of all the marsh grasses, the springs at Grimshaw Lake are even prettier than the puddle at Bad Water.” 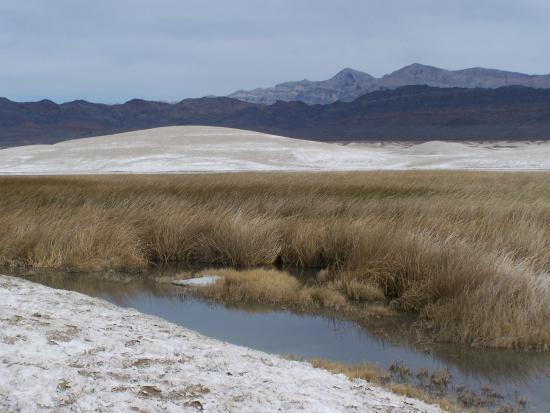 “A sign warns of how fragile this kind of ecosystem is.” 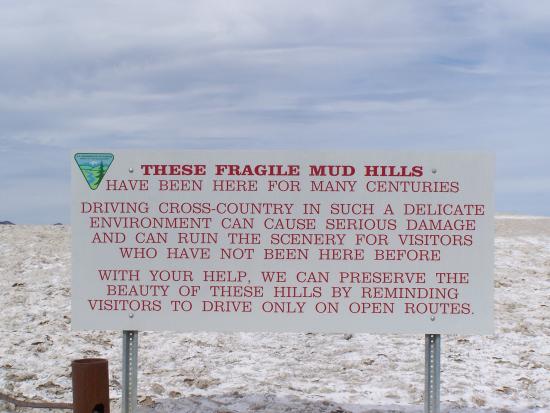 “My daughter carefully made her way down to the stream though.  We just had to know if the water was a hot spring or cold water. This water was refreshingly cool.”

“Desert oasis, like this one here, are critical to the survival of all the desert’s wildlife.  The name “Tecopa” means Wild Cat in the Paiute language.  Paiutes are the native people of the eastern part of California and they still reside in Death Valley National Park on a reservation next to the Furnace Creek Ranch.” 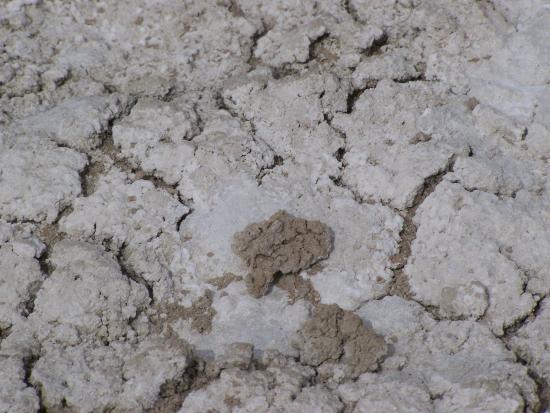 “While we did not see any big wild cat prints here at this stream, we have seen many at nearbyAsh Meadows Wildlife Reserve: another fantastic place to explore in the vicinity of Death Valley National Park and the Las Vegas region.” 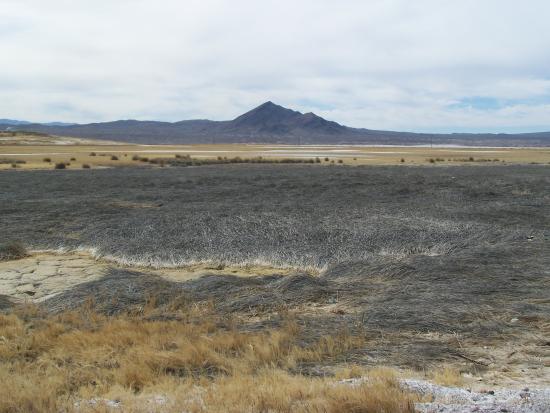 “The wetlands that cover this area are critical to birds’ migration through the dry Southwest.  These wetlands were also instrumental in allowing people to migrate West.  Tecopa Hot Springs sits on the Old Spanish Trial. Thousands of years before that, it was a major trading route for the Native populations.  Until the early 1930s, a large Native population, named the Yaga, lived here.” 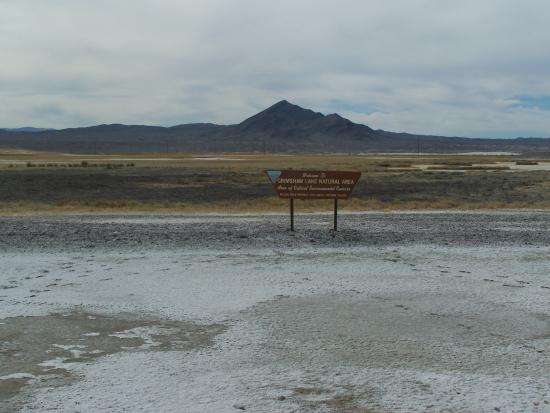 Webpage posted April 2002. Banner replaced April 2011. Updated March 2012 with information on Ed Grimshaw, who built the dam that created the lake, based primarily on information provided by George Murphy.