Immigrant to New Jersey from the Audenshaw Area near Manchester

Frank Barstow Grimshaw was born at Wilmslow, Cheshire on August 10, 1882, the sixth child of Joseph and Jane or Jean (Barstow) Grimshaw. The family apparently lived on an estate called Hawthorn villa, which was sold to the British government in World War II. Frank Grimshaw apparently emigrated to America in about 1904 and subsequently married Edith Webster. The couple had two children – Betty Arundel and Chester Converse Grimshaw. They apparently lived in Essex, NJ, and Frank worked as an accountant in New York City. Circumstantial evidence indicates that Frank’s father, Joseph Grimshaw, was descended from the Audenshaw Grimshaw family line, which is described on a companionwebpage.

According to family lore from Anne Arundel Babcock, Frank and Edith Grimshaw’s granddaughter (daughter of Betty), Frank attended Cambridge and then emigrated to join the North West Mounted Police of Canada. However, these assertions have not yet been verified.  Frank and Edith were apparently married in Hyde Park, MA, Edith’s home town, and the couple lived in Essex County, NJ (Glen Ridge, Verona, and Summit) while Franked worked in New York City.

Photos of Additional Family Members of Frank and Edith Grimshaw

Where are Wilmslow, Cheshire and Bloomfield, NJ?

A Clue on the Origins of Frank Barstow Grimshaw’s Family

Cresswell Grimshaw, Nephew of Frank Grimshaw, Died in World War I in France

Thanks go to Anne Arundel Babcock, Frank and Edith Grimshaw’s granddaughter, for providing family history information and many photos. Thanks also to Norman Grimshaw for contributing the information for the clue on Frank Grimshaw’s origins and for Cresswell Grimshaw, nephew of Frank Grimshaw who was killed in World War I.

Anne Arundel Babcock has provided the excellent photo of Frank Barstow Grimshaw shown below. The date of the photo is not known. 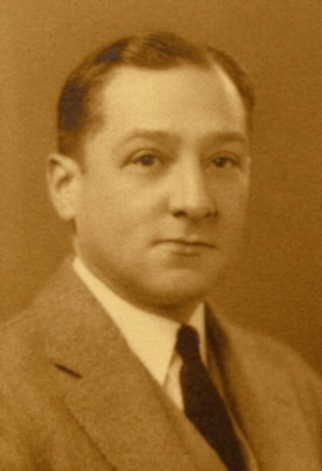 Edith (Webster) Grimshaw is pictured below. The date of the photo is unknown but may be in the same timeframe as the above picture of Frank. 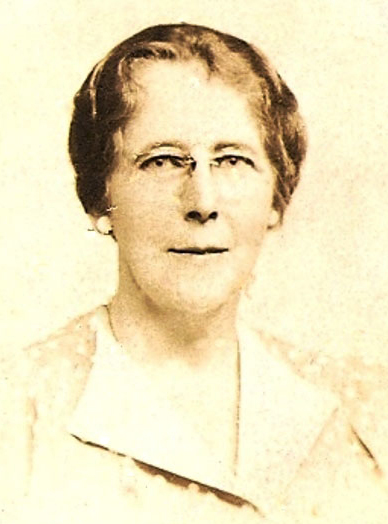 The ancestor and descendant chart shown below can be constructed from information known thus far on Frank Grimshaw (provided below on this webpage).

Anne Babcock has provided a number of photos of Frank and Edith with their descendants; they are shown below. 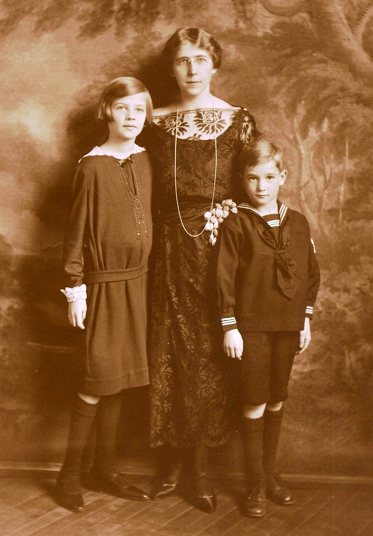 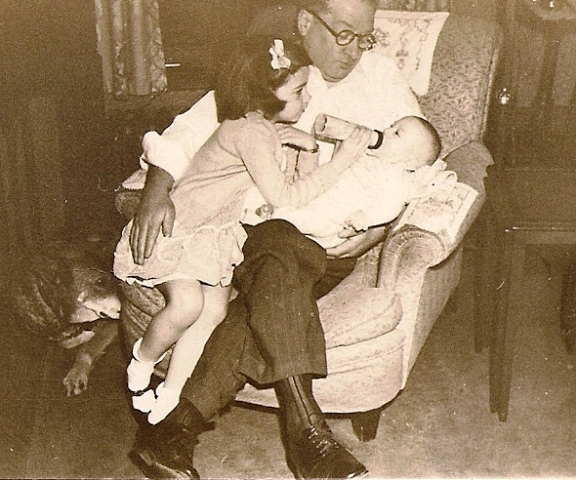 In 1980, Chester Converse Grimshaw, son of Frank and Edith Grimshaw, wrote a response to a letter of inquiry from Edwin Grimshaw. The inquiry was sent to many of the Grimshaw families living in the U.S. at that time (see companion webpage). The letter from C. Converse Grimshaw is shown below.

Thank you for the Grimshaw lineage you sent me. I dont believe any of the listed are related. The following is what I know of my immediate family background but have no records of the past lineage, for Grimshaw. I only have the lineage of my mothers side, who was a Webster, Converse (Noah and Daniel were her second cousins and the lineage goes way back to William the Conqueror on the Converse side. John Webster is as far back as the family had on Webster  he was born in England and came to this country in 1635 and founded Ipswich, Mass.

Frank B. Grimshaw (B. for Barstowe) was born to Jean and Joseph Grimshaw Aug. 10, 1882 in Wilmslow, Cheshire, England. They lived on the estate called “Hawthorne Villa”. The Villa, when my grandparents died was sold to England for a hospital during World War II. My dad did tell me that Arundel was part of the lineage. My sister was named Betty Arundel Grimshaw. This is all we know right now and when I can find time, I may delve deeper into it. I do know that the Mormon Church in Utah has the most extensive lineage background for every name but what the charges are for the information, I have no idea. Thank you again for writing.

The 1930 U.S. Census found Frank and Edith Grimshaw living in Glen Ridge, Essex County, NJ with children Betty A and Converse W (should be Chester Converse) Grimshaw. Also living in Glen Ridge were Hugh and Alice Grimshaw with children Edward and Jane. This family is descended from a different Grimshaw immigrant, as described in a companionwebpage on George and Mary (Barnes) Grimshaw.

David Barstow has created a website on his family that includes information of the parents of Frank Grimshaw, Joseph and Jane (Barstow) Grimshaw. The website link and relevant family information are shown below.

Frank Barstow Grimshaw not born yet at the time of the 1881 census record shown below for his family of origin at Hawthorn Villa. The probable connection of this Grimshaw family to the Audenshaw Grimshaw family line (see companionwebpage) are clearly indicated by the birth of both Joseph and Jane in Dorylsden, which is near Audenshaw, and by the birth of two of their children (Mary and Charles) in Audenshaw. 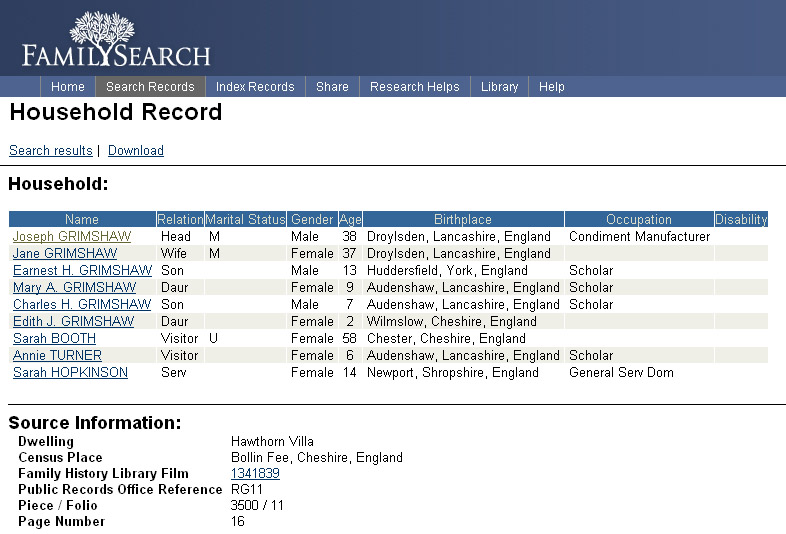 The Ellis Island record shown below indicates that Frank Barstow Grimshaw, accountant, arrived in the U.S. in September 26, 1909 on the ship Cedric. However, he had already been living in New Jersey since 1904. He was classed as a “Non-immigrant alien”. He was born in Wilmslow, Cheshire, and was headed to 373 Franklin Street, Bloomfield, New Jersey. It seems likely that he was returning home from a visit to his homeland. Images of the original entry in the ship log follows the Ellis Island Passenger Record. 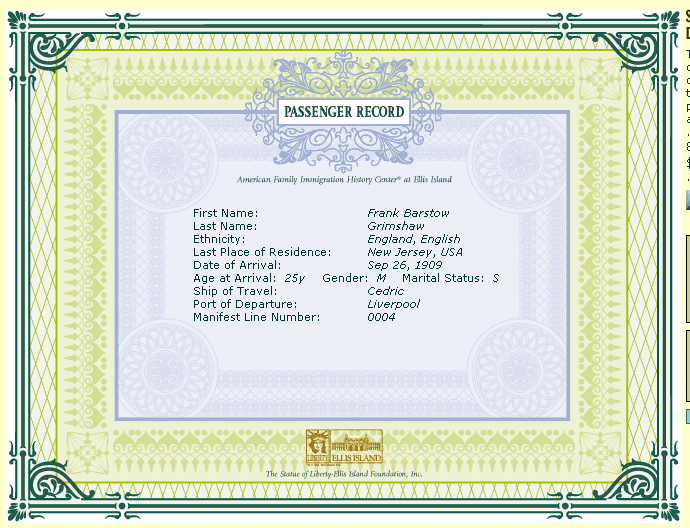 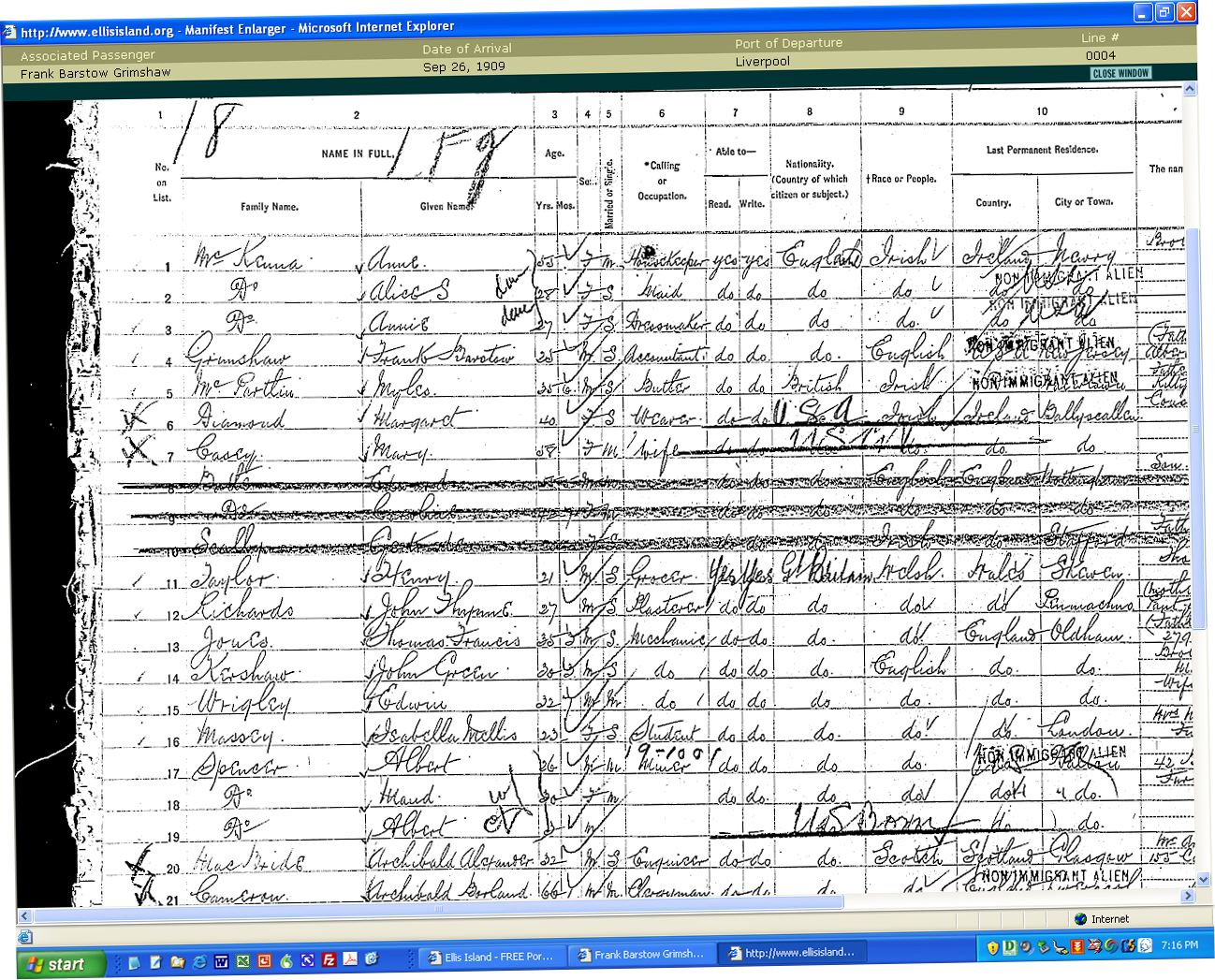 From Frank’s registration card, shown below, it may be determined that he was married to Edith (Webster) Grimshaw, and that he lived in Essex, New Jersey and worked in New York City. 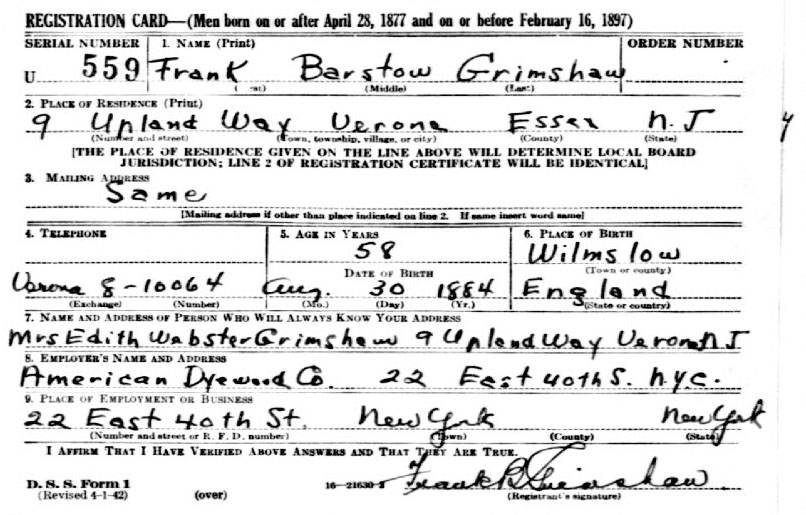 Wilmslow, where Frank Barstow Grimshaw was born, is southeast of Manchester Airport as shown in the two maps below 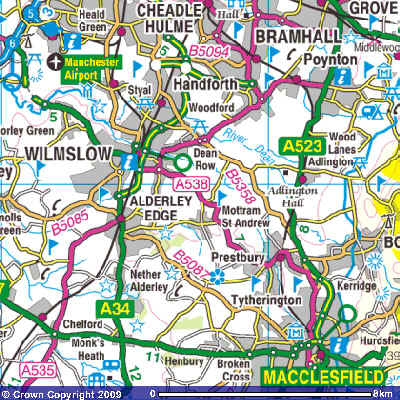 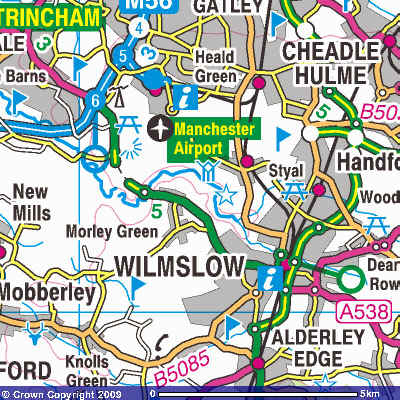 Bloomfield, New Jersey, where Frank Grimshaw lived in 1907, is about 7 or 8 miles south of Paterson.

In March 2011, Norman Grimshaw sent an email with the following clue on a connection between Grimshaws and Barstows:

Found in the 1879 British Commercial Directory and Shipper Guide: the following address,

… Guide Bridge was originally a minor halt (on the Manchester- Stockport railway line). Due to the onslaught of the industrial expansion it was encompassed into the greater Audenshaw area. The conjecture is stated in the Barstow Grimshaw webpage that their may be an Audenshaw Grimshaw connection. The above snippet favours further investigation.

This reference was found on page 882 (Ashton Section) of the 1879 British Commercial Directory and Shipper Guide under the category “Horse and Cattle Condiment Manufacturers”.  Information from David Barstow’s website (reviewed above) indicates that Joseph was a “condiment manufacturer”, which indicates a definite connection. It seems possible that Joseph and Jane/Jean Grimshaw, who were married in 1867, may have been the proprietors of Grimshaw and Barstow in Guide Bridge in 1879. Or perhaps their parents were the Grimshaw and Barstow, and they met and married because the families knew each other.

Also, Guide Bridge, where Grimshaw and Barstow had their establishment at Providence Mill, is located very close to Droylsden, where Joseph and Jean/Jane Grimshaw were both born. The proximity of Guide Bridge to Droylsden is shown in the following maps (at smaller and larger scales) from the Ordnance Survey Get-a-Map: 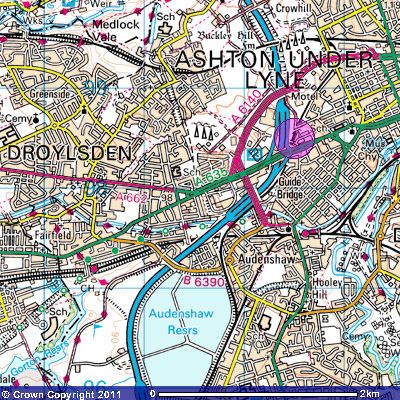 Despite this clue, Joseph Grimshaw, Frank’s father, has yet to be “tied in” to the Audenshaw Grimshaw family line.

Creswell Young Grimshaw was the son of Frank Grimshaw’s older brother, Ernest Harry Grimshaw. He was killed in action during World War I trench warfare in France at the age of 22. He is buried in Vieille-Chapelle Military Cemetery, Pas de Calais, France. Norman Grimshaw has found the following excellent website record of Cresswell Grimshaw and his military service. 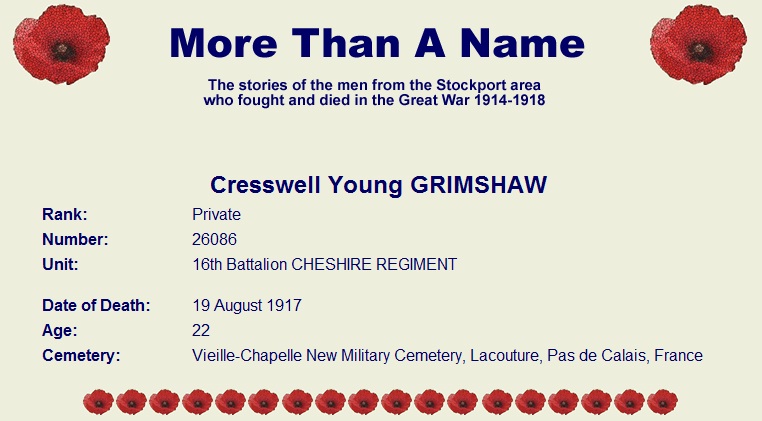 At the time the 1901 Census was taken, it is possible that Ernest and Charlotte were not in the country as they do not appear to be listed. Cresswell, however, then aged 5, is listed as living in Wilmslow, presumably with his grandparents.

When War was declared in 1914, Cresswell was serving an apprenticeship at Messr Henry Faulder & Co at the Company’s confectionary works at Stockport. He enlisted in May 1915. The 16th Cheshires was popularly known as a “Bantam Battalion” – its original members all having been previously rejected by the army as being under the regulation height of 5′ 3″. The Bantams went on active service in January 1916.

By all accounts, Cresswell was a keen gardener and was reported to have even grown some flowers in the trench which he had sent to his grandparents. The conditions that men had to endure in the trenches makes this an unlikely story.

On 19 August, the Battalion was at Lempire, approximately 20 kilometres north east of the French town of Peronne. They were in support of an attack by the 15th Cheshires and “W” Company gave covering fire. After the 15th had secured it’s objectives, “X” and “Z” Companies carried stores and ammunition up to the new front line. Cresswell was a signaller and his first job after an attack would be to ensure that any broken telephone wires were repaired. His officer wrote to his family telling what had happened.
“Whilst trying to find a break in our wires, along with a comrade (during heavy shell fire by the enemy), both were killed by a shell dropping between them. I went to the spot personally and saw both your son and his comrade lying close together. Neither of them could have suffered any pain, death being instantaneous. May I have the honour to inform you that we have lost a very excellent young soldier and everybody in his company feels his loss greatly. He was always so cheery and willing, at any time or under any conditions. His actions speaks for itself of bravery and devotion to duty. It was only the night before, I saw him endeavouring to find a break in our wires during heavy shelling. He seemed to go about his work quite quietly as if nothing was happening at all. I was slightly wounded myself, not sufficient to take me away from my post and he came along to know if I was all right and whether he could do anything for me or not.”

Cresswell’s comrade was another local man, Samuel Daniels. They are now buried next to each other.

Cresswell Grimshaw’s cemetery is described on Find-A-Grave as follows:

Cemetery notes and/or description:
Villers-Faucon is a village about 12 kilometres north-east of Peronne. The Cemetery is situated north of the village on the road to Guyencourt-Saulcourt.

Villers-Faucon was captured by the 5th Cavalry Division on 27 March 1917, lost on 22 March 1918, and retaken by the III Corps on 7 September 1918. The Commonwealth graves in the communal cemetery are those of soldiers who died in February-August 1917, or (in the case of two who are buried in Row B) in September 1918. They were made by the cavalry, the 42nd (East Lancashire) Division, and other fighting troops.

The record for Cresswell Grimshaw on the Find-A-Grave website is shown below:

Converse Grimshaw, son of Frank and Edith Grimshaw, lived in Tulsa and died there in 1994. Coincidentally, the descendants of William R Grimshaw, who was born in New Jersey in 1892, also lived in Tulsa. William Grimshaw migrated to Tulsa in about 1920 and is not related to the family of Frank Barstow Grimshaw. William’s family is described on a companion webpage.