John Grimshaw, descendant of Nicholas and Anne Grimshaw (of Oakenshaw) in the Pendle Forest Line, was Captain in the 5th Royal Lancashire Militia and J.P for Westmorlund1. His coat of arms is included in Foster2 and is shown below on this webpage. John and his wife, Mary Jane Hutton, are shown in the 9th generation of the Pendle Forest descendant chart. Their oldest daughter, Eleanor, was the ancestor of important family lines in Canada. Eleanor’s two family lines are shown below3. According to information provided by Marjorie Scott, Eleanor immigrated to the U.S., to New Mexico, where she married George Charles Dixon (whom she had met in England). The couple then migrated to Washington, where their one child was born, and then to Canada, where they had a homestead. After Dixon’s death, Eleanor remarried, to Harry Shenfield, in Canada. This couple had eight children.

Coat of Arms and Crest of Captain John Grimshaw

John Grimshaw’s Chair as a Baby

A Grimshaw Poem by “Poet” Close

Thanks go to Gerald Brewin and Barbara Alteman for providing much of the information on this webpage. Thanks also to Mavis Long and Linda Close for the information on Poet Close, described below on this webpage. And to Patricia Brewin for providing pictures of John Grimshaw’s chair as a baby. Also to Marjorie Scott for sending rich detail on Eleanor Grimshaw and her life.

Eleanor’s two lines of descendants, the Dixon and Shenfield lines, settled mostly in western Canada. Eleanor’s lines are unusual for North American Grimshaw descendants in that it is clearly tied back to the Pendle Forest line and thence, potentially, to the original Grimshaw family line of Eccleshill and Clayton-le-Moors.

The connection to the Pendle Forest line is shown below. 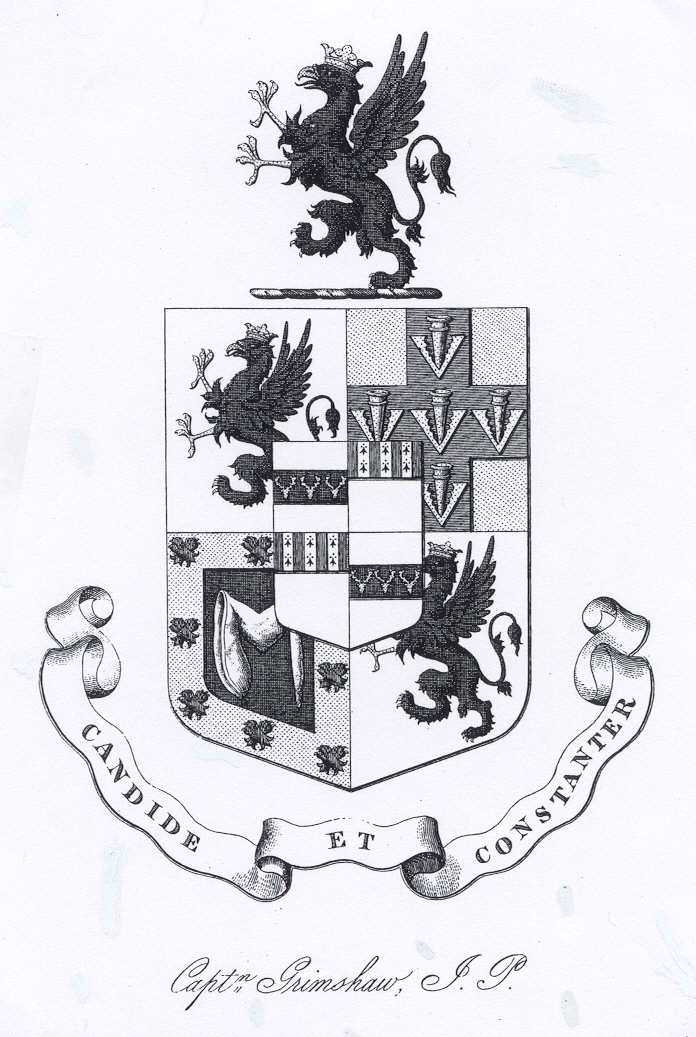 Barbara Alteman has provided the following photos and associated descriptions for Mary Jane (Hutton) Grimshaw and her father, grandfather, or great-grandfather, Thomas Hutton. Thanks go to Barbara for providing these photos. 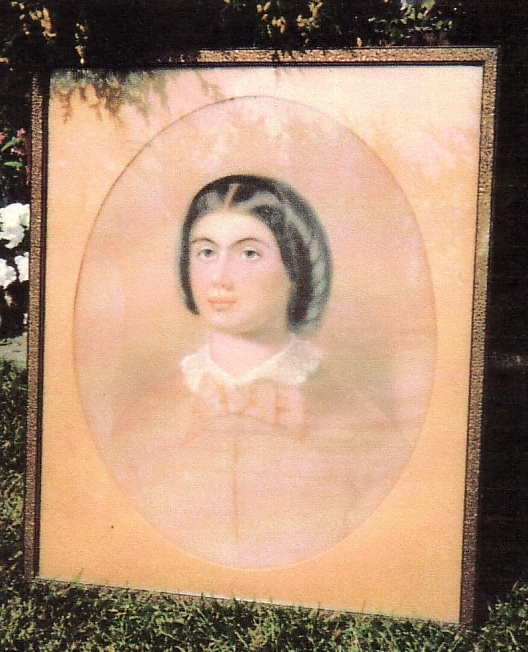 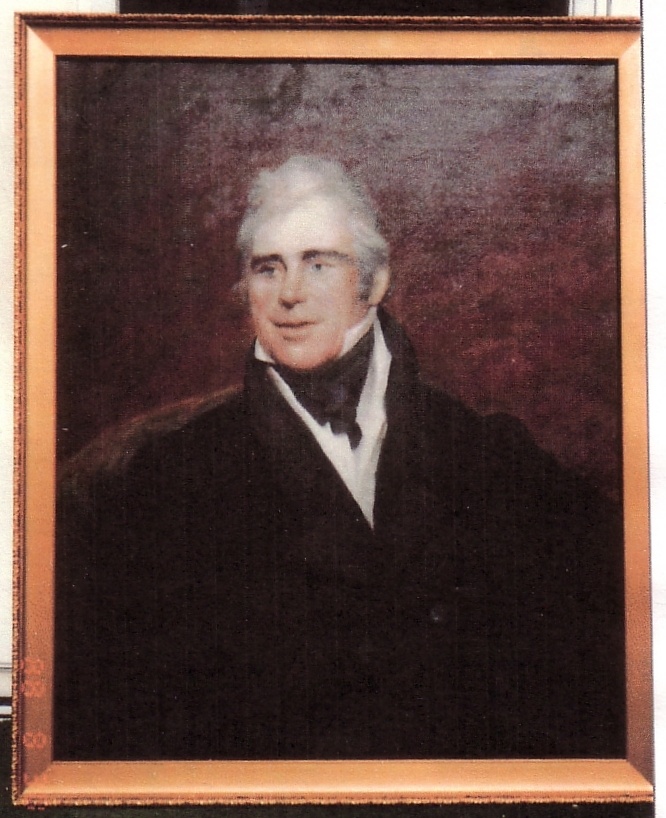 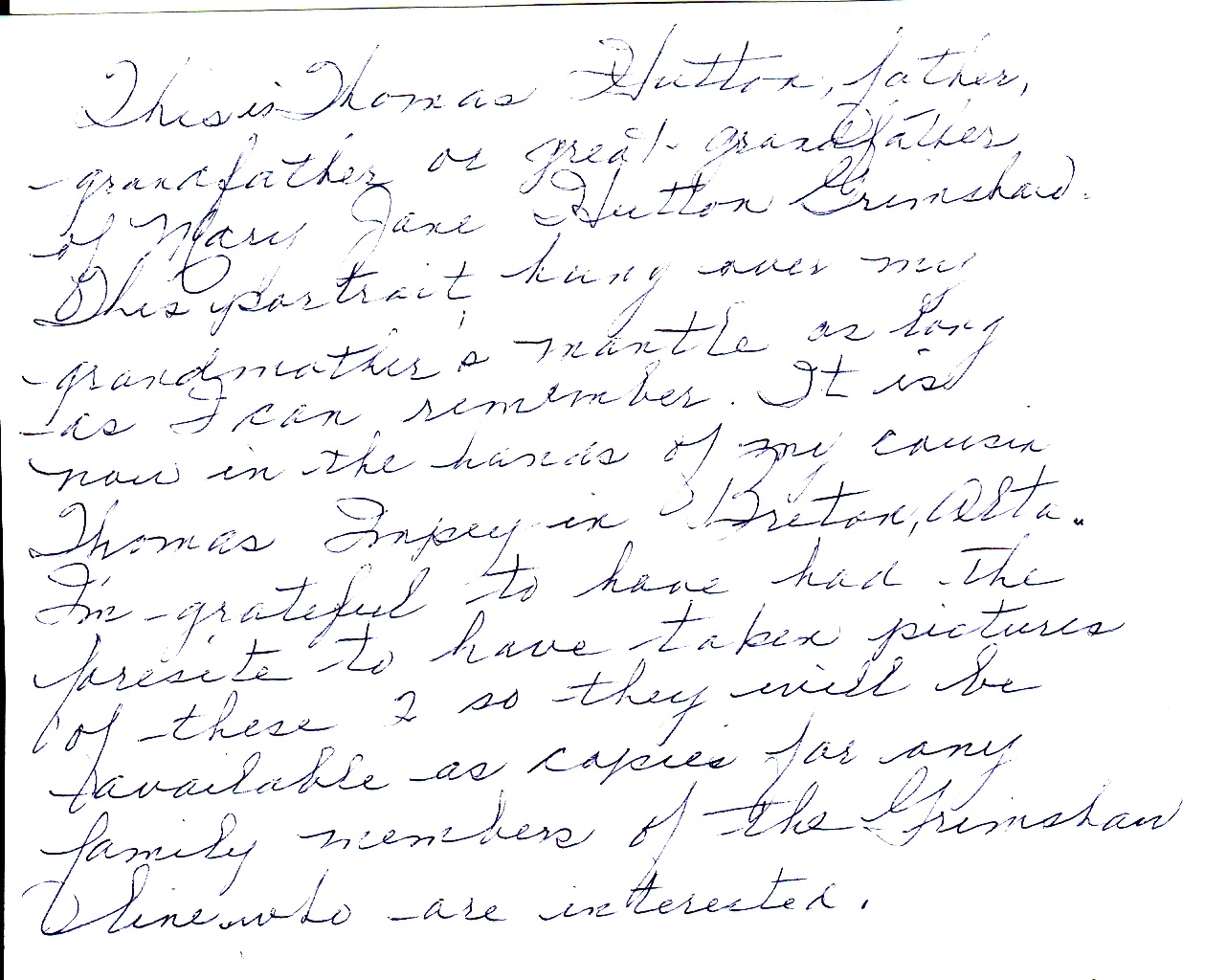 In July 2008, Patricia Brewin provided the following interesting pictures of a chair that was made for John Grimshaw when he was no more than a year old. 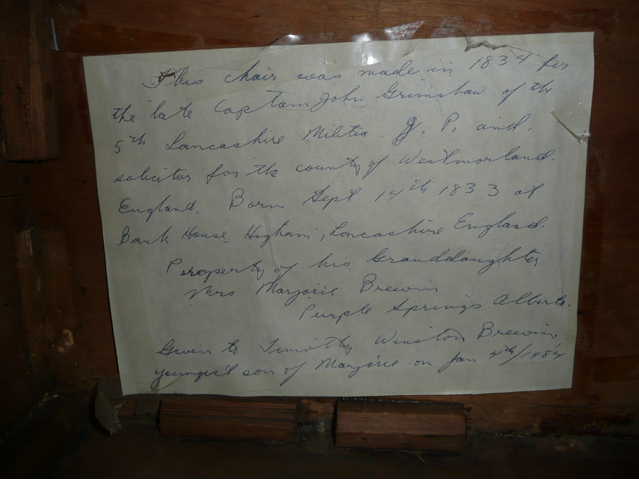 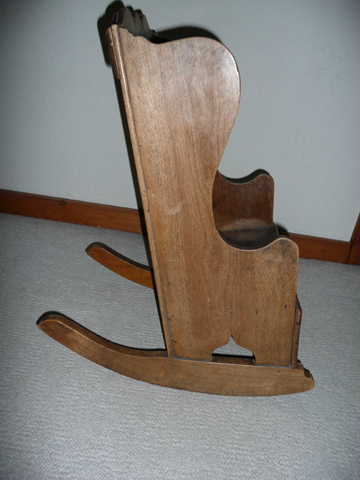 “Poet” Close authored two poems4 at or near the time of the marriage of John Grimshaw to Mary Jane Hutton, one of which honors the three families of Grimshaw, Hutton, and Walton. The poem is cited below:

The Grimshaws are an Ancient Race,

All in the Olden Time.

And near Pendragon’s Walls,

Where acres broad, and fertile meads,

And mount and Waterfalls,

Stretch far away up Hill and Dale,

And close to Eden Springs:

The Grimshaws were in Olden Time,

They hand-in-hand with Clifford’s Lord;

The famous Countess Anne, She treated them with courtesy,

In Warlike Times, when Cromwell blew

So many Castles down,

The Grimshaws still held fast their own,

Supporters of the Crown.

And thus in Queen Victoria’s Reign,

One of this good Old Race

Has won a Virgin, pure as good,

His Hall, his Home to grace.

And from this Union of good blood

What Great Men still may spring;

One half depends on nerve and brain; –

The Huttons, they are sound as oak,

All reach a good old age:

The last, he made his name beloved

While on this earthly stage.

The present Squire, a man of Skill

For he was taught by Nature Wise,

Who smiles at School or College.

The Waltons, all of Crackenthorpe,

No better blood than they,

If we may trust what writers tell,

Believe all that they say:

An Ancient Family, we know,

Fam’d for its high renown;

And better still, in spite of all,

They clung unto the Crown.

But space forbids us more narrate

Of all their Pride and Beauty;

The good Old Men have pass’d away:

Old men who did their duty.

What Lands, Estates, and Fields so Green!

Many thanks to Gerald Brewin for contributing this poem. Mavis Long has found the following website with additional information on “Poet Close”:

John Close, the poet, was born in 1816 in Swaledale, Yorkshire and died in 1891 in Kirkby Stephen Westmorland. The above webpage provides the following:

Apparently John was a bit of a poet in his time (aka “Poet Close”). He was obviously the arty one … and allegedly bombarded the local gentry with his offerings from about 1850 up to his death in 1891. So much so that, much to the publics’ bafflement, he managed to blag a 50 pound pension for his efforts!

Here’s a little sample of his doggerel:

Around the gods, each seated on a throne,
The poets, crowned like royal kings they sat.
Around their heads a dazzling halo shone,
No needs of mortal robes, or any hat.
(“Haloes, Not Hats”)

The following additional information on Poet Close was obtained from Linda Close by Mavis Long in July 2007.

As a young man John helped his father Jarvis with his butchers business but he mistakenly thought he had a talent to be a poet. At the age of 16 he started printing fly-sheets of his verses to sell at the markets and later progressed to writing books.

In 1846 he established himself as a printer in Kirkby Stephen and called himself “Poet” Close and his house “Poet’s Hall”. His prolific publications included his annual “Christmas Book”. In addition to his verses and stories these gave a revue of the year’s events in the district and therefore contain much biographical information on the inhabitants of the district as well as on his family and relations. In 1858 he married a young widow who had three children and together they had five of their own. During the summer months John lived at Bowness where he had a bookstall at the boat-landing stage on Lake Windermere.

The Closes and the Barkers were ardent Methodists, several of them being local preachers for many years, However John was always making disparaging remarks about Methodists while at the same time writing about “good old John Barker”. At one time his sister Ann, who was married to a local preacher .-George Yare, wrote to him on behalf of their mother, asking him not to be so harsh on the Methodists. He was in the habit of letting his pen run away with his discretion and so in 1859 was taken to court: in Liverpool for libel for remarks he had made about a young lady of the Kirkby Stephen district. This resulted in £300 damages against him. He also had great difficulty making a living, however, he was in the habit of saying flattering things of those in authority and in high places. In 1860, through the influence of Lord Lonsdale, Lord Carlisle and other gentlemen, he was granted’ a Civil List Pension by the Prime Minister Lord Palmerston. When it was discovered by Parliament that his writing had no merit the pension was stopped and he was given £100 from the Royal Bounty by Lord Palmerston in compensation. He continued to write of this “injustice” for the remainder of his life.

Thanks go to Barbara Alteman and Jerry Brewin for providing information on this family line.