Author’s Note: When conducting family history research, it is inevitable that a variety of human situations will be encountered. It must always be remembered that it is not possible to know all the facts or have the complete picture from a historical perspective. Whereas it is essential to report historical facts insofar as they are known, it is also necessary to avoid “passing judgment” on any given situation in the absence of knowing all the facts, which (as noted) is impossible from a historical perspective. Such a situation apparently exists in the case of Duckworth Grimshaw.

Duckworth Grimshaw was born in Lancashire in 1822 and married and had a family there. Then, when his sisters sailed for America as Mormon emigrants, he secretly joined the sailing party. Sometime after arriving in America, Duckworth apparently married again, to Bridget Monahan, and had a second family. He also changed his name, adding “Francis” as his first name. Duckworth and Bridget were married in New Hampshire, but eventually settled in Killingly, Connecticut, where they lived out their lives and are buried.

Description of the Town of Killingly, Windham County, Connecticut

Thanks go to Pat Schwarm and Melaney McHale, who have posted information on the internet that has been very useful for preparing this webpage.

Duckworth was apparently the 6th child of Lawrence and Mary (Duckworth) Grimshaw, whose family line is described on a companion webpage. His parents, at least two of his sisters, and several of his nieces and nephews also emigrated to America. One of his nephews, another Duckworth Grimshaw, is also described on a companion webpage. Duckworths family line is shown in summary form from an LDS Ancestral File2 in Figure 1 below.

Duckworths emigration to the U.S. is described in an account by his nephew, Duckworth, in “The Records of Duckworth Grimshaw1” as shown below.

In the course of time, Hoyle and Sons Factory Masters built a weaving shed at Tottington, a little closer to home, so we went to work for them; they were men of families and experience. About this time my father’s sister, Aunt Faith and Aunt Susana and her husband William Robinson, also John Robinson and wife, Joseph and Henry Tattersal – converts to the Church of Jesus Christ of Latter Day Saints – were about to leave for America, and if permitted, finally to arrive in Utah. My Uncle Duckworth Grimshaw, not a member of the Church, thought he would like to accompany his sisters to Liverpool and see them set sail, which be did; but to their surprise he sailed with them and two or three days later came out from the luggage where he had been hiding. The captain of the ship took the matter up and was going to put him to hard labor as a deck hand but his sisters and friends, with a charitable hand, made up a purse by donation and the captain accepted it as his fare to New York. A letter was sent to my father by his wife’s brother-in-law, and they were shocked to think he would desert a good wife and six children and leave them to the mercy of the public. He sent letters from New York and some money a few times but finally dropped out of sight and no more was heard of him except that he had married. I have tried but could get no tidings of his family left in England.

As noted at the top of this webpage, it is essential to avoid “passing judgment” without having all the facts of a situation, which is impossible from a historical point of view.

Mary Duckworth, Duckworth Grimshaw’s mother, apparently came from a long-established Lancashire family. Like Grimshaw, Duckworth is a Lancashire name of long standing. Duckworth Hall is located southeast of Blackburn within a few miles of the Grimshaw location. A photo of it is shown in Figure 2 below. The location is shown northeast of Grimshaw on a map on a companion webpage. 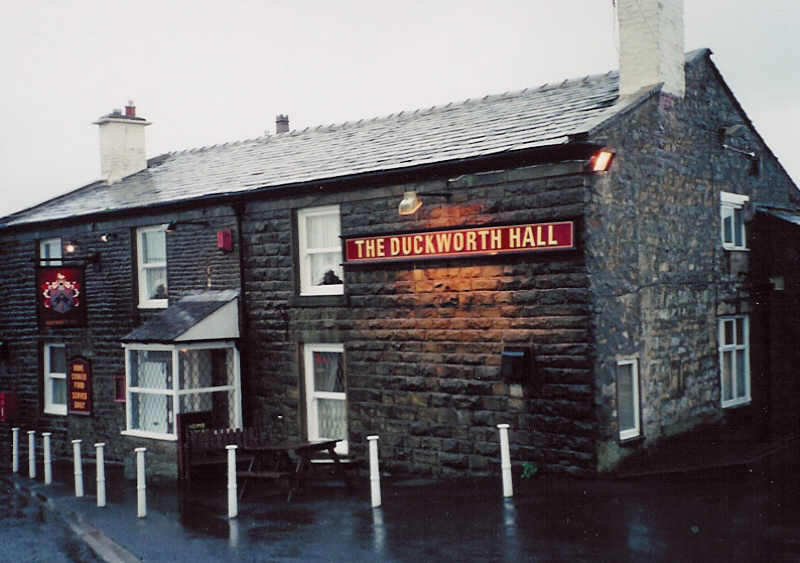 Sometime after arriving in the U.S., Duckworth apparently lived in New Hampshire. According to family bible records held by Melaney McHale, he was married by the Town Clerk in Manchester in 1857. He also changed his name by adding Francis (probably nicknamed “Frankie”) as his first name. A daughter, Rosa, was born about 1860 in New Hampshire. The 1880 U.S. Census for Connecticut found the family living in Killingly with 6 children: 20-year-old Rosa; Michael, age 16; William, age 14; Mary, age 12; and John Gilman, age 5. This record may be found in a companion webpage and is shown in Figure 3 below. The three oldest children are shown working at a cotton mill.