Thanks go to Michael Grimshaw for providing the information that has made this webpage possible.

After reviewing the existing information on the “Grimshaw Origins” website concerning the tie-in of the Duckworth Grimshaw family line (through his grandparents, Lawrence and Mary [Duckworth] Grimshaw), Michael Grimshaw sent the an e-mail explaining why the then-current information was incorrect. Michaels e-mail, shown below, also provides a summary of the correct interpretation according to his research.

It was with great excitement that I found your grimshaworigin.org website and I have read with great anticipation the information about the Grimshaw family contained on your website. As a descendant of Duckworth Grimshaw, I was especially intrigued by the attempt to link Duckworth Grimshaws line to Walter de Grimshaws line, and also noted the problem of connecting two Thomas Grimshaws by marriage to Jane Duddell/Jane Ellison. I think the issue ensued by assuming these two Janes were one and the same person. They were not. Jane Duddell was married to Thomas Grimshaw b. 1634. According to Whitakers History of Whalley, Thomas and Jane had no children.

That still leaves the problem of connecting the Duckworth Grimshaw line to the Walter de Grimshaw line. My own research indicates there are three missing generations before the two lines connect. I believe these three generations are as follows: Thomas (chr. 1638) is the son of William Grimshaw, b. abt. 1605, and Margaret Halliwell, b. abt 1609, both of Church, Lancashire, England. They were married 1630 at Blackburn, Lancashire, England (confirmed by parish records). William and Margaret had at least three children: John, Elizabeth, and Thomas (chr. 1638).

Williams father, I believe, is another Thomas Grimshaw, b. abt 1575 of Clayton, Lancashire, England. With this Thomas another problem ensues in that records show Thomas married to two different wives. My research indicates Thomas first married Jeneta Edg of Blackburn, Lancashire, England. They were married 13 Jan 1600 at Blackburn (confirmed by parish records). Some records indicate the marriage was 13 Jan 1601, but 1600 appears to be correct. Blackburn parish records also confirm that Jeneta Edg was buried 9 Jun 1603 (Could she have died in child birth???). Then Thomas appears to have married Jane Helme, b. abt 1582 of Goosnargh, Lancashire, England, dau. of Leonard Helme and Issabel Parker. Records indicate the marriage took place about 1600, but that would be impossible since that is the date of Thomas marriage to Jeneta Edg. The marriage to Jane Helme must have occurred no earlier than the latter half of 1603 (after Jenetas death) or in 1604, with William born in 1605.

I believe Thomas (1575) father is Richard Grimshaw, listed in some records as born abt 1546 of Clayton, Lancashire, England. However, another issue is raised with this Richard. His father is Thomas Grimshaw, listed in some records as born in 1500 and married to Margaret Harrington (should actually be Margaret Stanley, dau. of John Stanley and Elizabeth Harrington, dau. of Sir John Harrington). Here, I believe, is the tie in to the Walter de Grimshaw line. Thomas and Margaret have a number of children, listed in both Whitakers History of Whalley and Robert Parkers Landed Gentry of Lancashire County from 1681. These children are Richard, John, Henry, Nicholas, Raufe, Elizabeth, Isabel, Jane, Alice, Dorothy, and Anne. However, these children cannot be listed in the correct order and Thomass date of birth abt 1500 cannot be correct. According to Whitaker, Thomas succeeded his father, Henry, in the line abt 1506 and married Margaret Stanley abt 1509. Thomas was probably born abt 1488/89 as listed in some records. In a will dated 16 Aug. 1513, before going off to fight in the Scotch war, Thomas leaves provisions for three daughters: Elizabeth, Isabel and Jane. That means these three daughters must have been born between 1509 and 1513. Thomas also leaves provisions for his wife and a child “with which she is now great”. This child must have been his forth child and perhaps his first son, Richard, who thus would have been born 1513/14. That raises an interesting question: If this first son was Richard, his heir, how could he be the same person as Richard (1546)? Obviously they could not be the same person. However, Whitaker makes a claim, quoting as follows: “According to Dugdales pedigree (Visitation) Thomas had by one Amatia or Margareta 2 illegitimate children, Richard and Henry.” Most records list Richard as born 1546 and Henry 1548. This is also not possible since Thomas, their father, died in 1539 (according to Whitaker) and his wife Margaret died in 1549. Therefore, Richard and Henry must have been born at least ten years earlier, abt 1536 and 1538 respectively, but that still means Richard (1514) and Richard (abt 1536) are two distinct persons. Parker also states that one Richard was the third son of Thomas. (Is this the illegitimate Richard?) That means that two of the other sons (Richard, John, Henry, Nicholas and Raufe) must have been born before Richard and Henry, the illegitimate sons, and still makes is it likely that Richard (illegitimate son) is the father of William and is missing from Whitakers and Parkers lists of children. (Are there also two Henrys? Quite probably.

Assuming this hypothesis is correct, the pedigree line for Duckworth Grimshaw would be as follows on the attached pages.

I would be very appreciative for any information/feedback confirming or refuting this hypothesis. From the limited records to which I have some access, this seems the best explanation for tying the Duckworth Grimshaw and Water de Grimshaw lines together. I can be reached by email at michaelelizabethgrimshaw@yahoo.com.

Subsequently, in response to an inquiry about the sources for his information, Michael sent the following e-mail on December 12, 2007.

… As to where I located my “research findings”, most of the information came from the website www.familysearch.org. Added to that was the information from Whitaker’s History of Whalley and Parker’s Landed Gentry of Lancashire County, together with online parish records at www.lan-opc.org.uk and British History Online at www.british-history.ac. I also did quite a bit of searching at www.rootsweb.com and www.ancestry.com and www.eireindex.net/lancindex.

I hope that is helpful.

Based on the above information about Duckworth Grimshaws connection to the earliest recorded Grimshaw family, Michael developed the pedigree chart shown below. The point of tie-in is indicated in italics.

11. Richard, Grimshaw, b. abt 1536 (illegitimate son of Thomas by Amatia or Margareta).

The following descendant chart for Walter de Grimshaw showing the details of the connection to Duckworth Grimshaw summarizes the information provided by Norman Grimshaw.

Further clarity of the connection of Duckworth Grimshaws family line to the earliest recorded Grimshaw line of Walter is provided in the following diagram, which goes down as far as Lawrence Grimshaw (15th generation), who was the great-great grandfather of Lawrence Grimshaw (19th generation), who in turn was Duckworths grandfather. This chart therefore shows the first 15 of 22 generations (down to the children of Duckworth Grimshaw) that have been researched by Michael Grimshaw. 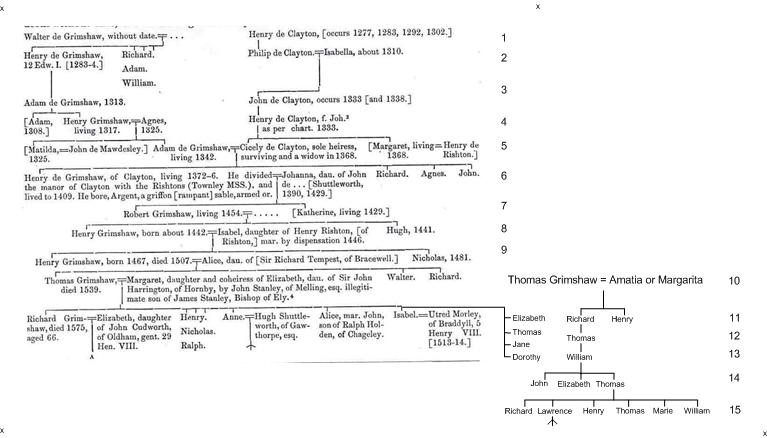 According to Michael Grimshaw’s research, then, Thomas Grimshaw, besides the 11 children he had by his wife, Margaret (Stanley) Grimshaw, also had two illegitimate children by Amatia or Margarita. Whitaker did not account for four of Thomas and Margaret’s children as well as the two children of Thomas and Amatia. The oldest of these two children, Richard, is the ancestor of Lawrence Grimshaw m. Mary Duckworth (generation 19) and Duckworth Grimshaw m. Mary Ann Moyes (generation 21).