Albert Harvey Grimshaw was born on May 29, 1883 in Rhode Island, the son of Amos James and Anna (Austin) Grimshaw and grandson of Riley and Margaret (Briggs) Grimshaw (see companion webpage). Albert received his education from several schools, including North Carolina State (NCS) College, where he wrote a thesis entitled “Microscopic Research of Factors Varying Penetration of Dyes on Rayons and Kindred Fibres”. He became an instructor at the New Bedford Textile School in 1917, and in 1925 he moved to the position of professor of textile chemistry and dyeing at NCS College, which he held for 24 years. He died in 1949 shortly after retiring and is buried in the North Burial Ground, Providence Rhode Island with his parents, Amos and Annie (Austin) Grimshaw, and his wife Bertha (LeCain) Grimshaw, who died a few years after Albert.

While at NCS College, Albert apparently donated a photocopy and microfilm copy of the indenture of apprenticeship document of his father, Amos James Grimshaw, to James Mather Daltry, to learn the “Art, trade, and business of a reed maker and Heald Knitter”, which is now in the NCS University Libraries Special Collections Research Center. Also donated was a copy of the 1944 “Grimshaw Newsletter”, which describes the lives of Grimshaw’s classmates at NCS College. Copies of Amos Grimshaw’s apprenticeship document have been obtained by Thad Grimshaw, and images are included on this webpage.

Which Grimshaw Family Line is Albert Grimshaw Descended From?

Who Did Amos James Grimshaw Serve His Apprenticeship With?

Austin Grimshaw, Son of Albert Harvey Grimshaw, Dean of U. of Washington School of Business

Grave of Albert Harvey Grimshaw and His Father, Amos James Grimshaw (and Their Spouses)

The following brief biography appears in the description of the apprenticeship document now in the NCS University Libraries Special Collections Research Center.

Rhode Island native Albert Harvey Grimshaw (1883 – 1949) received his education from the Massachusetts School of Pharmacy, Massachusetts Institute of Technology, Columbia University, North Carolina State College, and the New Bedford Textile School. He was a pharmacist and wrestling coach before becoming an instructor in chemistry and dyeing at the New Bedford Textile School in 1917. In 1925 Grimshaw left New Bedford for North Carolina State College, where he served as professor of Textile Chemistry and Dyeing for 24 years. During this time, he published articles in almost all of the textile trade journals in the United States. He was a member of numerous professional societies, including the American Association of Textile Chemists and Colorists and the American Institute of Chemists. In 1948, The N.C. State College Chapter of Delta Kappa Phi presented a large portrait of Grimshaw to the School of Textiles.

Grimshaw died shortly after his retirement in 1949.

Thad Grimshaw visited North Carolina State University in July 2006 and found two publications with pictures of Albert Harvey Grimshaw. Albert’s picture is shown below. The date of the photo is not known. 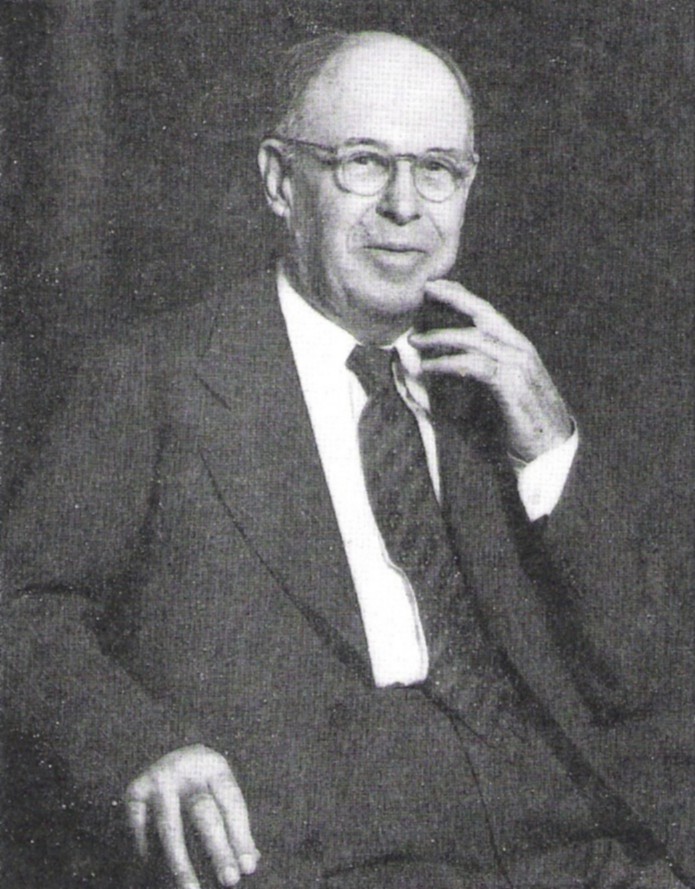 An image from Grimshaw’s thesis1 is posted on the website of North Carolina State University and is shown below. Much better images of the pages with textile samples are provided further down on this webpage. 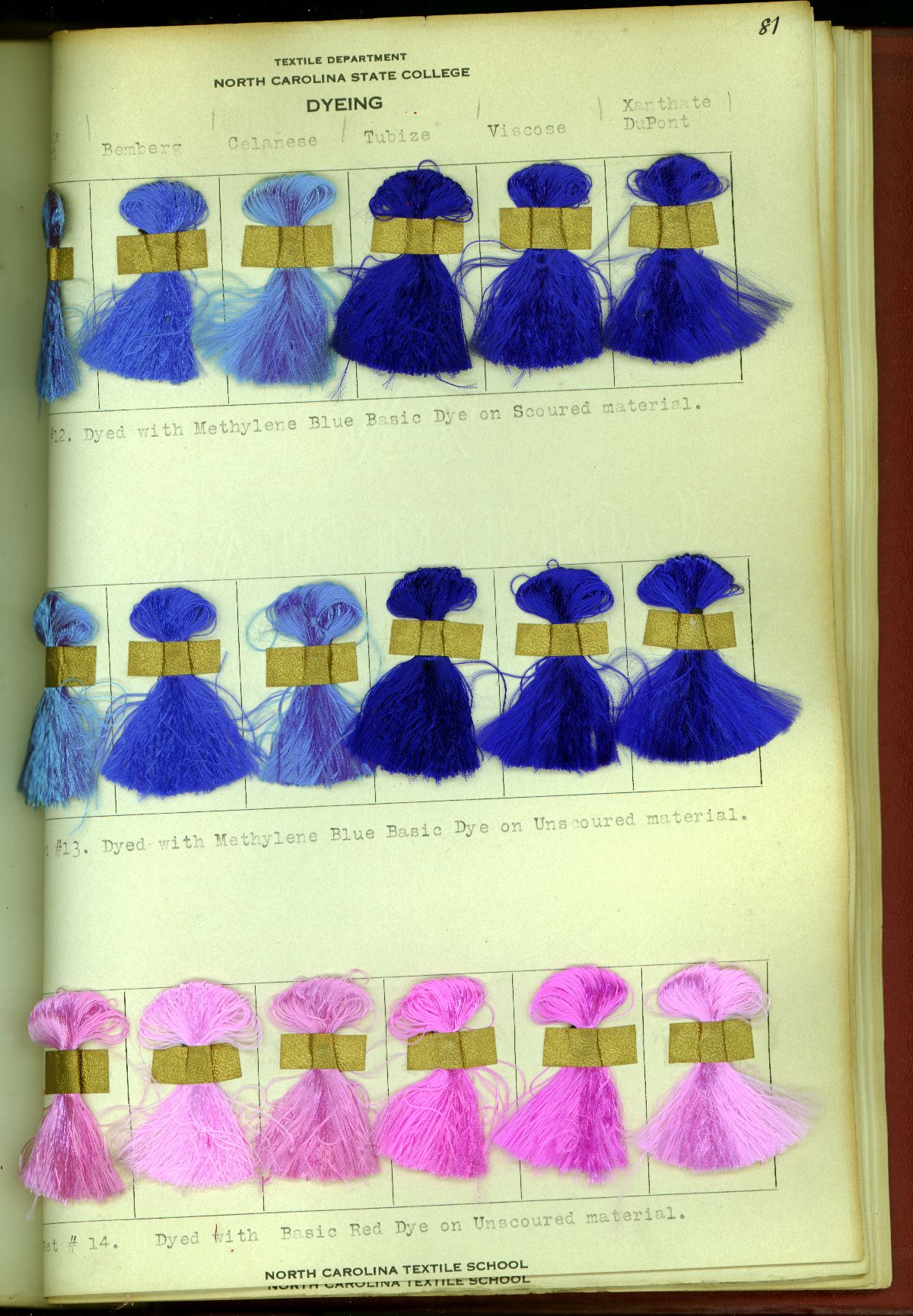 A copy of Albert’s thesis was obtained through inter-library loan, and a number of pages were scanned. The cover is shown below, followed by images of the title page and table of contents. Then the color photocopy pages with the textile samples are provided (pages 73, 75, 77, 79, 81, 83, 85, and 87). A copy of the thesis is provided below in two parts (it was apparently originally published in two volumes.)

The thesis was a systematic study of the factors affecting the uptake of dyes in textile fibers (rayon and related materials). Six different types of fibers (labeled Acetate Dupont, Bemberg, Celanese, Tubize, Viscose, and Xanthate DuPont) were tested with a number of dyes and under a variety of lab conditions. The thesis was produced in two volumes – a bound volume and a second volume as a three-ring binder.

A portion of the cover, the title page, the table of contents, and one of the pages of fiber samples are shown below. The other thesis pages with fiber samples are provided at the bottom of this webpage to complement the copies of the thesis at the hyperlinks above. 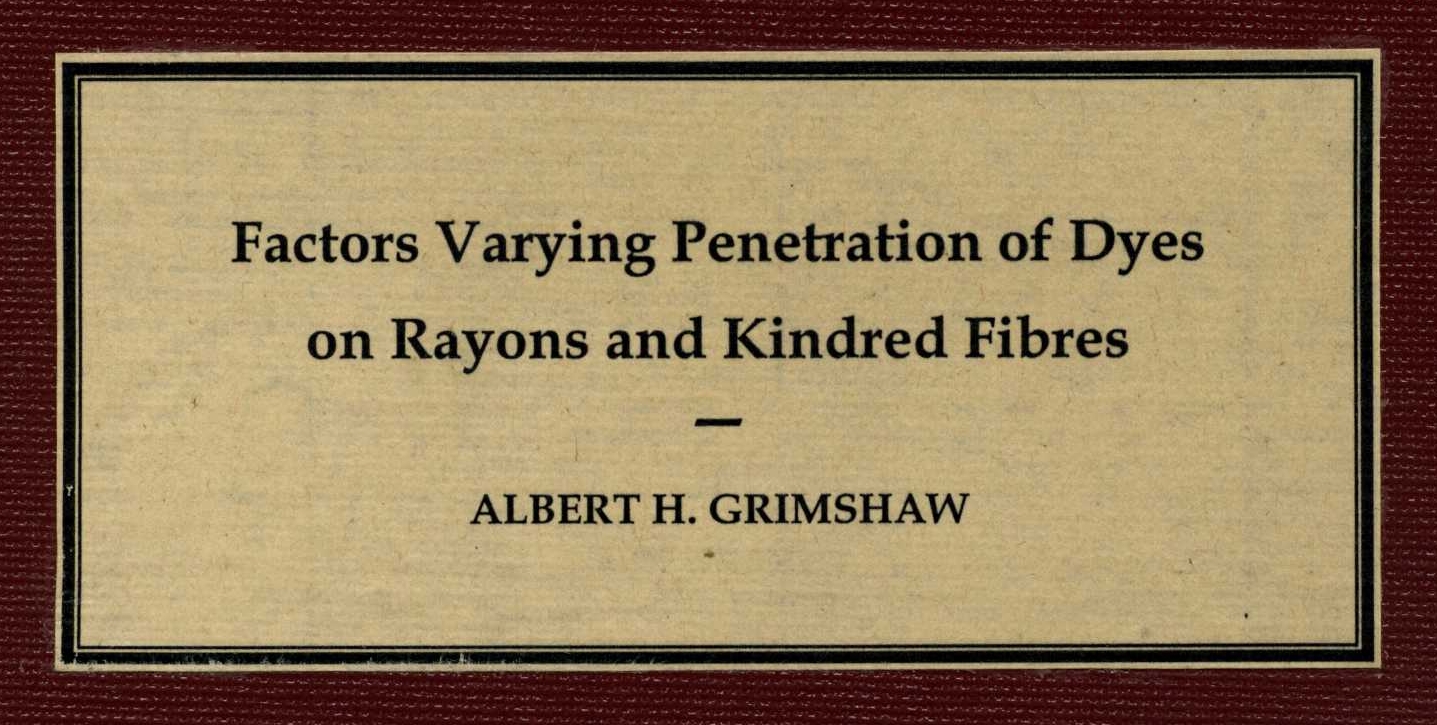 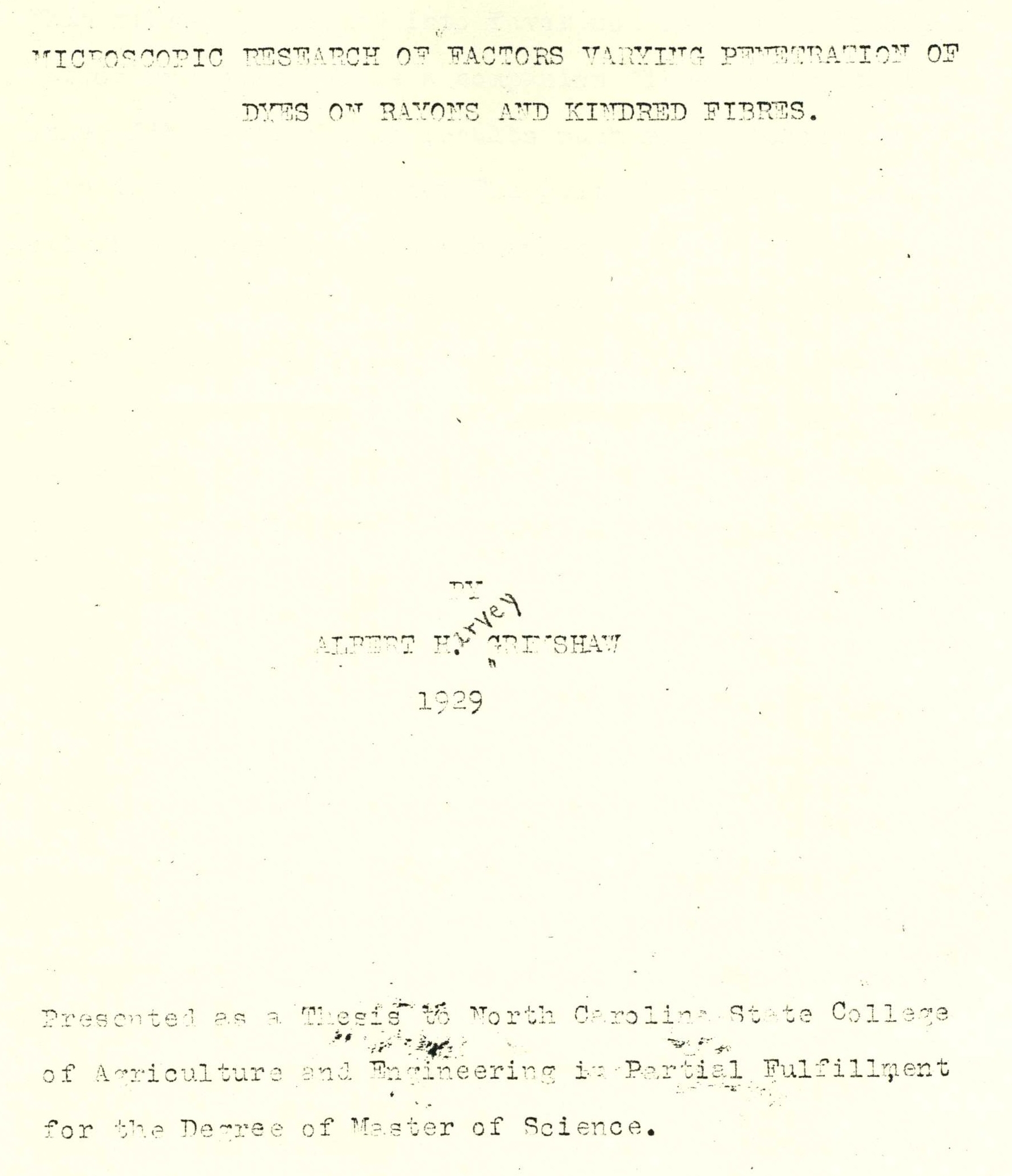 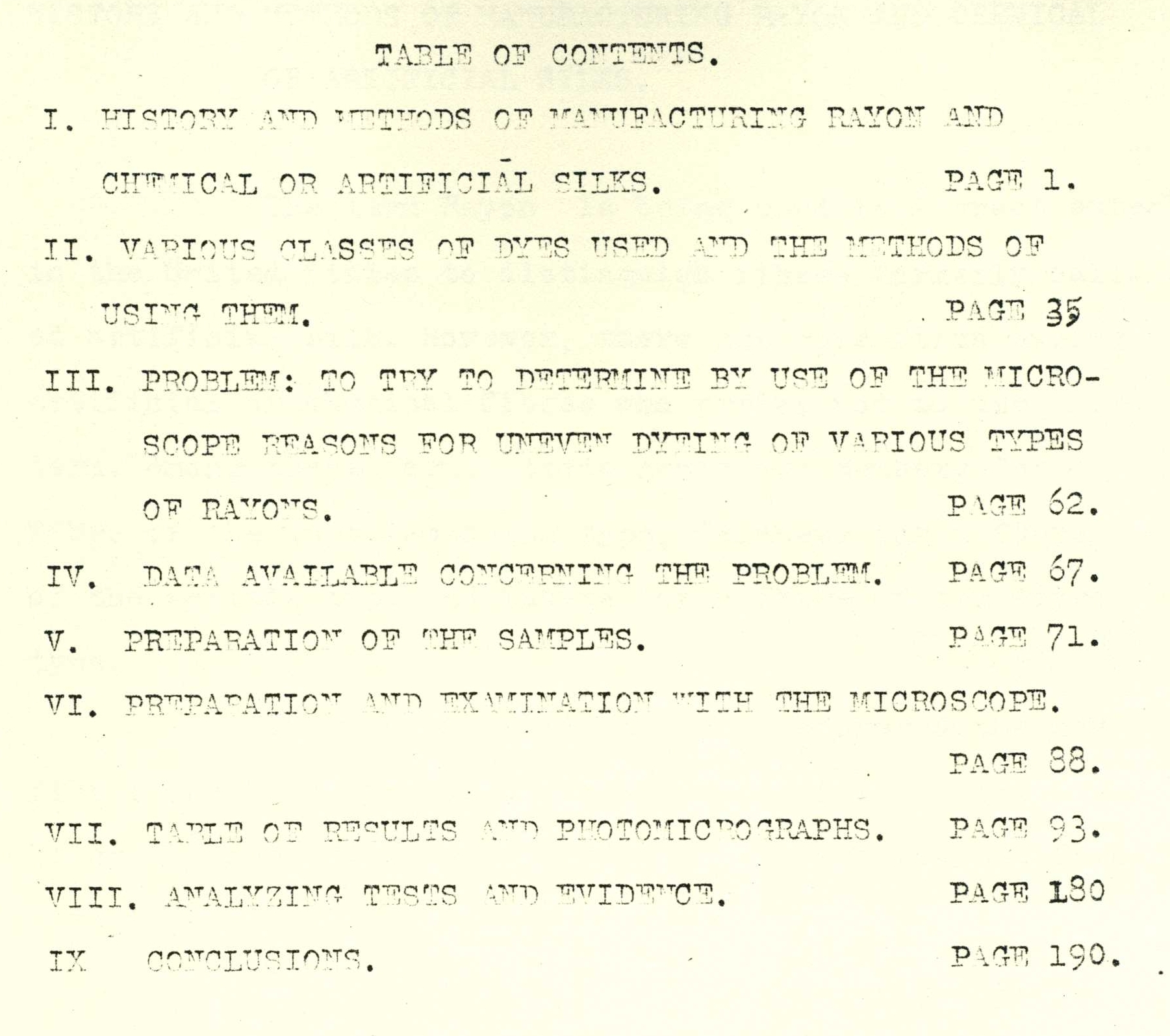 Sample Page (Page 83, repeated at the bottom of the webpage) 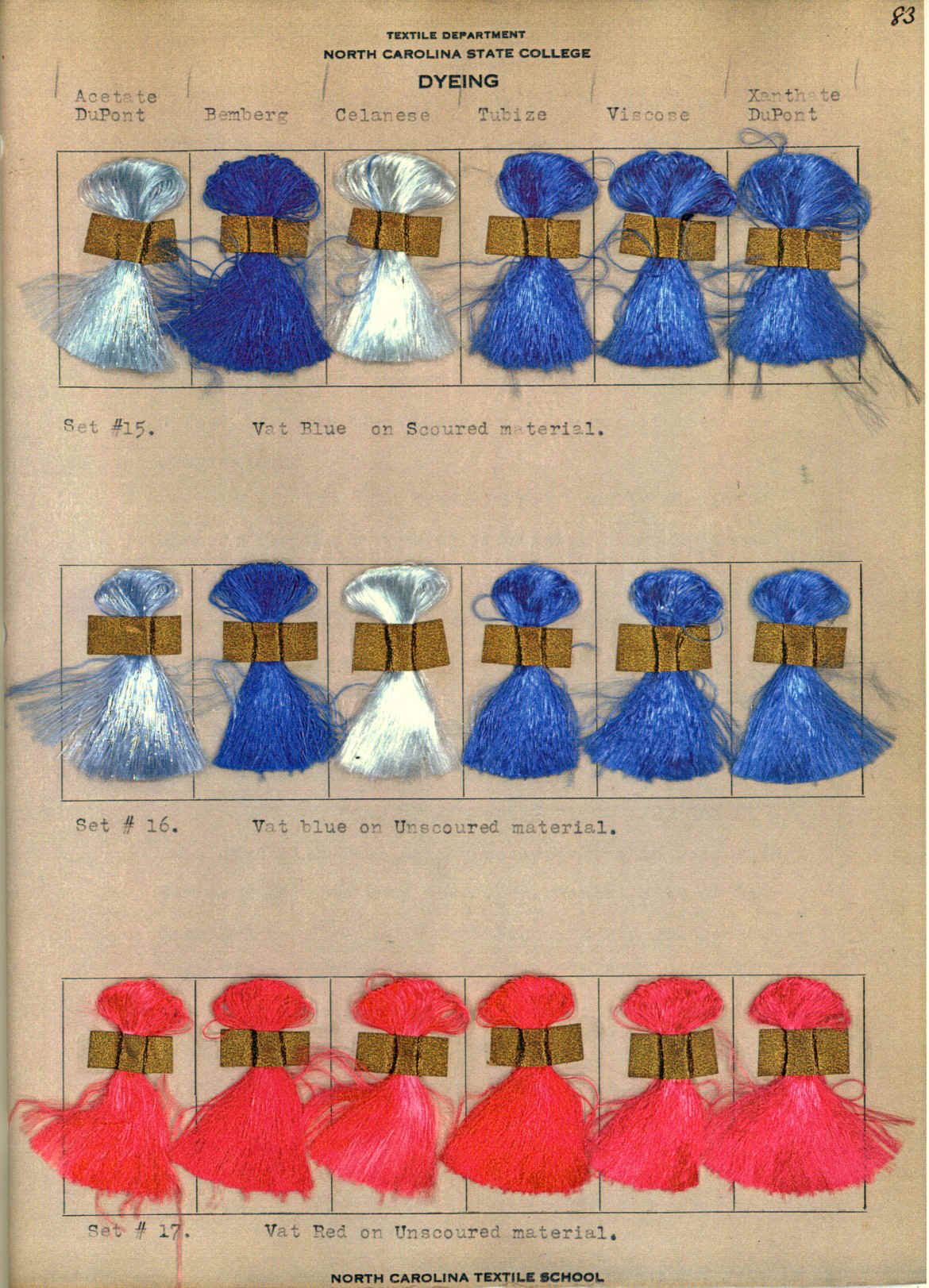 While at NCS State, Albert Grimshaw apparently assisted a female student to become the first woman to earn an M.S. degree in the textiles department. 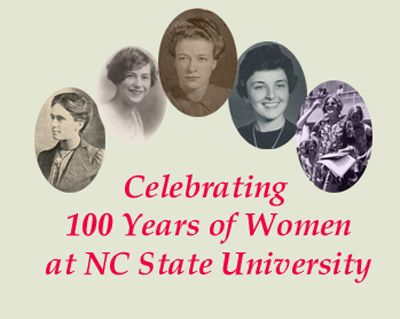