for Grimshaws as Recorded on Ancestry.com

The website Ancestry.com now offers online images of the entry pages of many of the censuses of the U.S. A search of the 1860 U.S. Census index for “Grimshaw” and “Grinshaw”  yielded 293 entries (with just one “Grinshaw). The Ancestry.com website address for the census search service is shown below; access to the images is provided for a monthly or annual fee.

Tabulation of Grimshaws in 1860 Census by Ancestry.com

Images of 1860 U.S. Census Records for Thomas and Henry Grimshaw

Tabulation of Grimshaws in 1860 Census by Ancestry.com

Two Grimshaws (Thomas H and Henry) were found in a previous search of the 1860 Census and are shown below. Then the 293 Grimshaws found in the second search are listed, sorted first by state, then by county and then by age.

Images of 1860 Census Records for Thomas and Henry Grimshaw

The images of the two census records for Thomas and Henry are shown below in two sizes. Thomas H. (or W.) Grimshaw was a 27 years old deck hand from from Canada. Henry and his wife J.E. Grimshaw were 48 and 45 years old, respectively, and were living with their daughter, J.E. Grimshaw (age 15), sons J.N. and E.E. Grimshaw (ages 12 and 7), and daughter Elen M. Grimshaw (age 4). Henry was born in England, but the rest of the family were born in Connecticut. 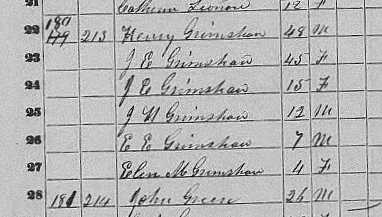 The following information on the 1860 U.S. Census is provided on the Ancestry.com website:

This database details those persons enumerated in the 1860 United States Federal Census, the Eighth Census of the United States. In addition, the names of those listed on the population schedule are linked to the actual images of the 1860 Federal Census, copied from the National Archives and Records Administration microfilm, M653, 1438 rolls. (If you do not initially find the name on the page that you are linked to, try a few pages forward or backward, as sometimes different pages had the same page number.)

Enumerators of the 1860 census were instructed to record the names of every person in the household. Added to this, enumerators were presented with printed instructions, which account for the greater degree of accuracy compared with earlier censuses. Enumerators were asked to include the following categories in the census: name; age as of the census day; sex; color; birthplace; occupation of persons over age fifteen; value of real estate; whether married within the previous year; whether deaf, dumb, blind, insane, a pauper, or a convict; whether able to read or speak English; and whether the person attended school within the previous year. No relationships were shown between members of a household. The categories allowed Congress to determine persons residing in the United States for collection of taxes and the appropriation of seats in the House of Representatives.

Few, if any, records reveal as many details about individuals and families as do the U.S. federal censuses. The population schedules are successive “snapshots” of Americans that depict where and how they were living at particular periods in the past. Because of this, the census is often the best starting point for genealogical research after home sources have been exhausted.

This release includes the records for the following states: AL, CA, CT, DA, DC, DE, IA, IN, and MA.

The United States was the first country to call for a regularly held census. The Constitution required that a census of all “Persons…excluding Indians not taxed” be performed to determine the collection of taxes and the appropriation of seats in the House of Representatives. The first nine censuses from 1790 to 1870 were organized under the United States Federal Court system. Each district was assigned a U.S. marshal who hired other marshals to administer the census. Governors were responsible for enumeration in territories.

The official enumeration day of the 1860 census was 1 June 1860. All questions asked were supposed to refer to that date. By 1860, there were a total of thirty-three states in the Union, with Minnesota and Oregon being the latest editions. There were no substantial state- or district-wide losses.