1850 U.S. Census Records for Grimshaws as Recorded on Ancestry.com

The website Ancestry.com offers online images of the entry pages of many of the censuses of the U.S. The 1850 U.S. Census has also been indexed by “head of household”. A search of the index for “Grimshaw” and “Grinshaw”  yielded a total of 62 entries, which have been tabulated on this webpage. For each entry, an attempt was also made to obtain the associated online image. A total of 26 images were located and have also been posted in this webpage. The outstanding feature of the images for the 1850 census is that the other members of the family (besides the head of household) are shown. (The 1850 census was the first to provide names of other family members.)

The Ancestry.com website address for the census search service is shown below; access to the images is provided for a monthly or annual fee.

As noted, a search for Grimshaws and Grinshaws in the head of household index on the Ancestry.com website produced a total of 62 entries. These are shown in the table below, which is sorted first by state and then by county within the state. The fourth column of the table (“Image”) indicates whether a corresponding image was also obtained for the entry. Images that were obtained are included further down on this webpage.

Approximately the first nine columns of the 1850 Census entries are shown in the images below; the remainder of the columns can be viewed on the Ancestry.com website. These columns provide the following information:

The images obtained for the 26 Grimshaw entries that were obtained for this webpage are shown below in order of state (and then county) in which the Grimshaws were living. A brief annotation of the census entry is provided with each image. If the Grimshaws recorded are the topic of another webpage on this website, a hyperlink to that webpage is also provided.

Henry and Julia Grimshaw, ages 36 and 33, respectively, were living in Middlesex County, Connecticut with their three children – Julia, age 5; James, 3; and Frederic, 3 months. Both Henry and Julia were born in England . He was a machinist. Two other children, Jane and Daniel Bailey (ages 15 and 2) were also living with the family.

Charlotte Grimshaw, age 54, was living in Pike County, Illinois, with Margaret and Thomas C. Grimshaw, ages 26 and 20. All three of these Grimshaws were born in Ireland. Thomas was a merchant. These Grimshaws are related to William Grimshaw, prominent Pike County attorney who was also recorded in the 1850 census (see below) and is the subject of a companion webpage.

Six other individuals were also living with the Grimshaws John and Mary Bush, with their son (John), John and Ellen Gallagher (ages 10 and 8), and Henrietta Shaw, age 50.

William A. and Maria A. Grimshaw, ages 37 and 33, were also living in Pike County with their four children – Lucy, age 5; Harriet, 3; Charlotte, 2; and Maria A., 8 months. Jackson Grimshaw, Willliams brother (see companion webpage) was living with the family. Both William and Jackson were lawyers. Also living with the family were Frances Green or Greer and Mary McGathey.

Thomas Grimshaw, age 22, was a laborer who was born in Nova Scotia and was living in Middlesex County, Massachusetts. His relation to John and Sarah Bater, with whom he was living, is unknown.

Henry Grimshaw, age 35, and his wife Martha, age 27, were living in Worcester County, Massachusetts with their 3-year-old daughter Julia A. Grimshaw. Henry was born in England; Martha in Connecticut. Daughter Julia was born in Massachusetts. Henrys profession may be forger or lawyer – the entry is difficult to read.

Thomas and Elizabeth Grimshaw, born in Pennsylvania and Connecticut, were living in Marion County, Missouri with their five children – Ann R., age 11; Hugh S., 9; Mary L., 6; Theodore, 4; and Virginia, 1. The children were born in Virginia (?), except for the youngest, Virginia, who was born in Missouri. Thomas was a 35-year-old wagon maker; Elizabeth was 28.

Nelson and Emeline Grimshaw, ages 29 and 24, were born in Canada, and were living in Clinton County, New York with their five children – Mary A., age 9, Adaline, 6; John, 4; Lucy, 2; and Barzilla, 3 months. The three older children, like their parents, were born in Canada; the two youngest were born in New York. Nelson was a descendant of Zephaniah Grimshaw, a colorful character who is described on a companion webpage.

John and Jane Grimshaw were born on The Isle of Man and were living in Kings County, New York. He was 48 and she was 51; their children, John and Samantha, were 19 and 16 years old. John was born on The Isle of Man, and Samantha was born in New York. John was a toll gatherer. William Hurst (?), a laborer, was living with this Grimshaw family. John was apparently the older brother of William Grimshaw, who married Phoebe Cain in Kentucky and settled in Lawrence County, Ohio. William and Phoebe are the subject of a companion webpage.

George Grimshaw, age 40, and his wife, Susan, 44, were also living in Kings County, New York. They were both born in England, and he was an engineer. Living with them were their seven children, all born in New York – Agnes, age 17; William, 15; Emma, 12; George, 8; Susan, 8 (therefore a twin of George); Charles, 6; and Frederick, 4. This family is the subject of a rich companion webpage, thanks to the able assistance of Trudell Leyck Wright.

Twenty-two-year-old Emma Grimshaw was living in New York Citywith the Haviland family, along with six others living with the family. Emma was a New York native. Subsequent research found that Emma was the younger sister of William Robinson Grimshaw (see companion webpage). She married Benjamin Haviland, grocer, two years later, in 1852. 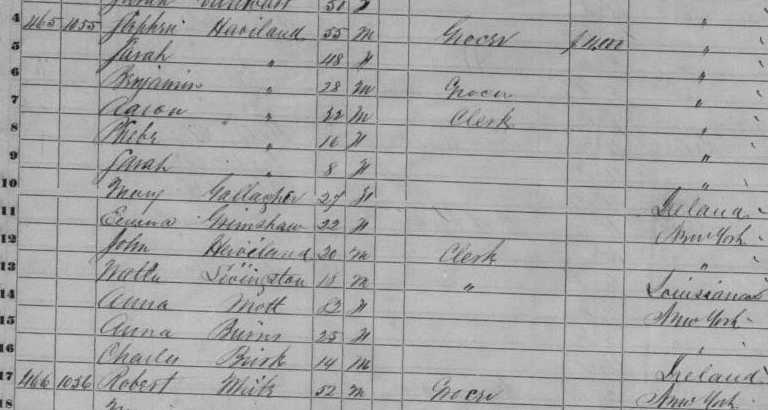 with their children (all born in New York ) – Isaac J., age 20; Jeremiah F., 18; William, 16; Margaret, 14; Charles H., 8; and Caroline N., 5. Joseph, an upholsterer, was born in England; Caroline was a native New Yorker. The three oldest children had the professions of moulder, ? maker, and machinist, respectively.

Richard Grimshaw, age 37, and his 36-year-old wife, Nancy, were living in Jefferson County, Ohio with their three children – John W, age 6; Mathew, 3; and Sarah E., 6 months. Richard and Nancy were born in Pennsylvania; the children were all born in Ohio. Also living in the household were John Mafale (?) and William Haley.

Joseph Grimshaw, a 35-year-old farmer, was living in Jefferson County, Ohio with his 30-year-old wife, Anne and their five children (all born in Ohio) – Edmund, age 10; Louiza M, 8; James, 7; Hannah, 6; and Mary, 5. Joseph and Anne were also born in Ohio. Interestingly, the census record is indexed on little Mary rather than her father, Joseph.

Samuel Grimshaw, a 42-year-old physician, was living with his wife, Alice (age 35), and daughter Mari (age 10) in Jefferson County, Ohio. Samuel was from England, Alice from Ireland. Interestingly, Mari was born in New Brunswick- did Samuel and Alice meet and marry in New Brunswick after immigrating separately? Catherine McFarland, who was living with the family, was in all likelihood Alices mother, since her age is about right and she too was born in Ireland

Dr. Joe Grimshaw was a 36-year-old physician who was living, apparently as a boarder, in Cumberland County, Pennsylvania. He was born in Maryland. 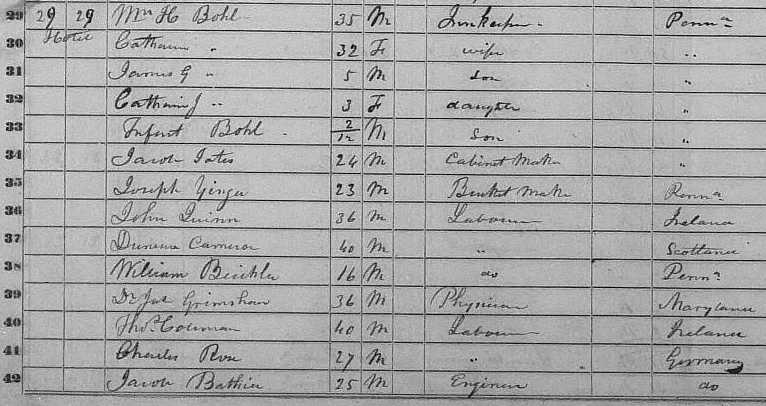 William Grimshaw, an attorney who was born in Ireland, was living with his wife, Mariah, and their 6-month-old son, Robert, in Philadelphia. At age 67, William was considerably older than his 29- or 39-year-old wife. William is the topic of a companion webpage– he was a noteworthy author of many history books. Here he is recorded living with his second family; he passed away within a few years while his son was very young. This son grew up to become a notable mechanical engineer and author of many technical books, as described in a companion webpage.

William Grimshaw, age 31, was a block printer who was born in England. He was living at the Hall residence in Philadelphia.

Robert and Mary Grimshaw, ages 43 and 36, were living in Philadelphia with their children – Virginia, age 8,Emma, 6, and Elwood, 3. All members of the family were born in Philadelphia. Living next door with the Murray family was Barbara Grimshaw, age 64, also born in Philadelphia. Barbara (Farrier) Grimshaw and her husband, William, are the subject of a companion webpage as are their son Robert and his wife, Mary. Robert and Mary subsequently migrated with their family to Minneapolis, where Robert and his son, William, became active in local civic service and politics.

Elizabeth Grimshaw, a 22-year-old Pennsylvania native, was living in Philadelphia with Elizabeth Hyer (?).

George Grimshaw, a 25-year-old house carpenter (?), was living with his wife, Sarah, 22, and daughters Susanna, age 2, and Elizabeth, less than one year old. All of the family were born in Pennsylvania Given her proximity in age and location in Philadelphia (Southwark Ward) to George, the Elizabeth Grimshaw in the previous records seems likely to be a sister of George.

Solomon Grimshaw, a 22-year-old clerk living with the merchant family, McDowell, was born in Scotland. He was living in Hampshire County, Virginia; he is also shown, erroneously, as living in West Virginia in the index.

Christopher and Jane Grimshaw, ages 34 and 26, were living in Dodge County, Wisconsin with their daughters Mary, age 5, and Martha, 2. All members of the family were born in England, so they were relatively recent immigrants. Christopher was a blacksmith.

Prior to obtaining the information from Ancestry.com, a survey of census indexes was performed, and the results provided in a companion webpage. The results for the 1850 U.S. Census are duplicated below to allow a comparison of the two surveys.

A companion webpage has been prepared for the interesting California gold field adventurer, William Robinson Grimshaw of Sacramento County. Arthur H Grimshaw was a Colonel on the Union side in the Civil War and was commander of the 4th Delaware Infantry Regiment; he is also the topic of a companion webpage.