for Grimshaws as Recorded on Ancestry.com

The website Ancestry.com offers online images of the entry pages of many of the censuses of the U.S., including the 1830 census. The 1830 census has been indexed by “head of household”. A search of the index for “Grimshaw” and “Grinshaw”  yielded a total of 7 entries. The Ancestry.com website address for the census search service is shown below.

Grimshaws Listed in the 1830 U.S. Census

Images of Grimshaw Entries in the 1830 Census

Description of the 1830 Census

The seven Grimshaw entries are shown in the following table. Three were in Pennsylvania and the other four were in Massachussets, New Jersey, New York and Ohio.

For each Grimshaw entry in the census, an attempt was made to obtain the associated online image. Images were located for all seven Grimshaw entries and have been posted below. A larger image of the entry is provided first, followed by a more complete portion of the page on which the entry appears. The columns in the census forms are as follows:

The records for the seven Grimshaws are summarized below with their respective census images. 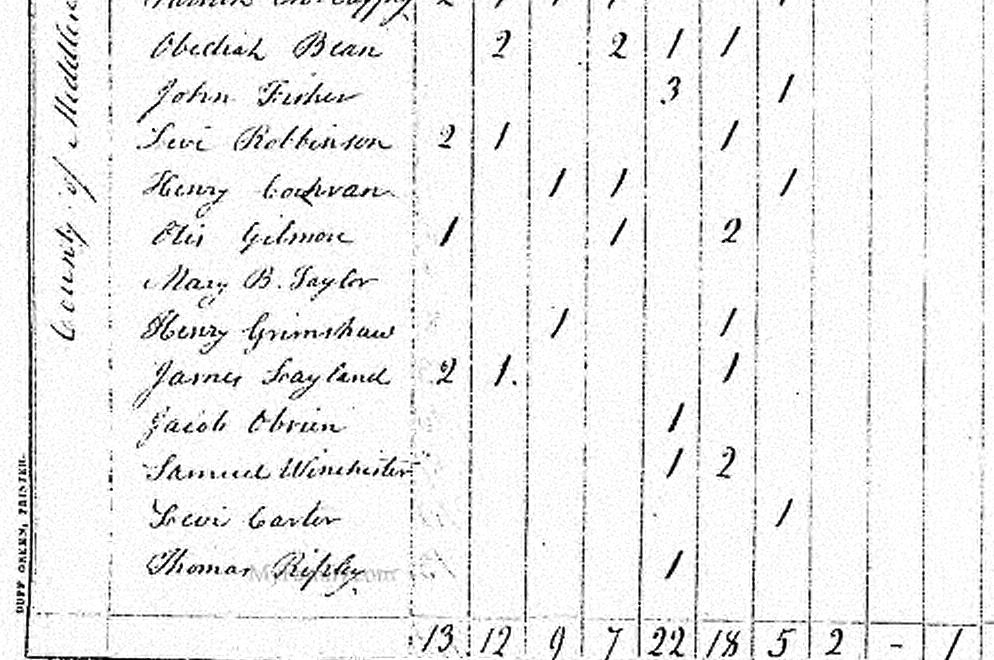 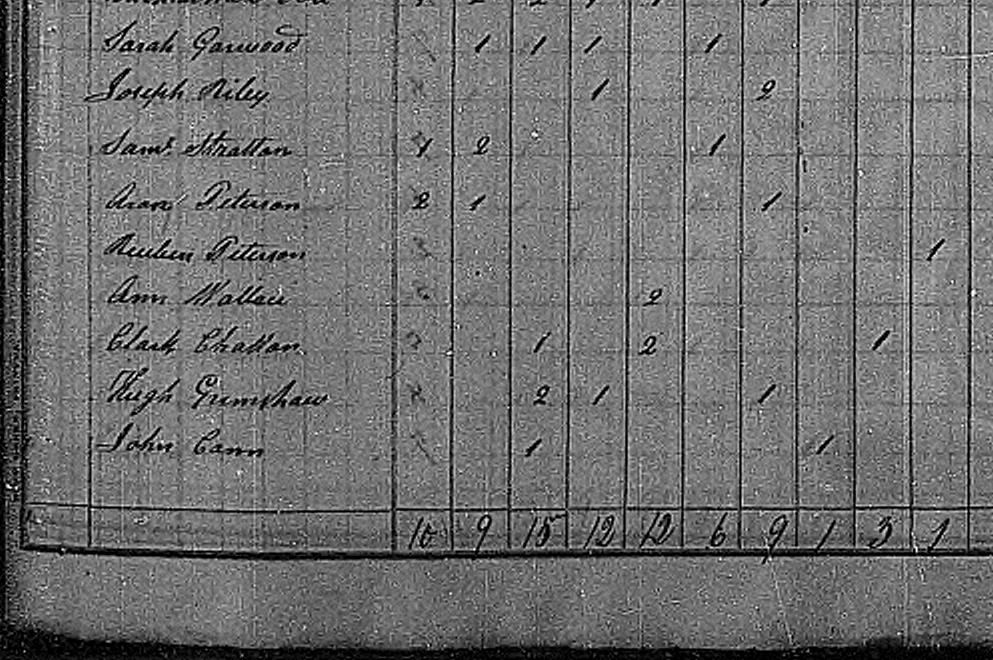 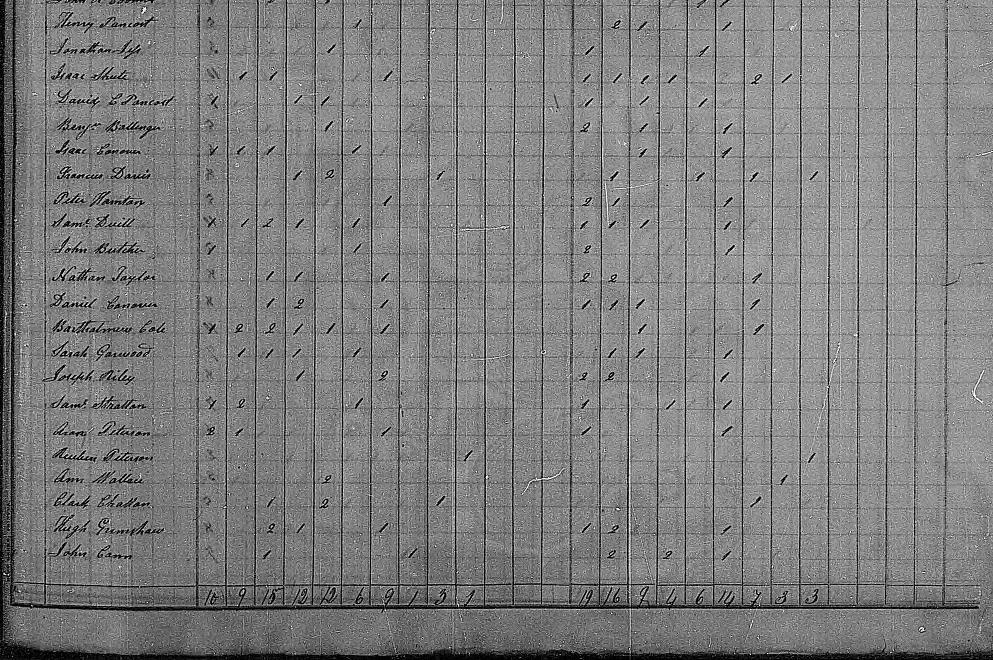 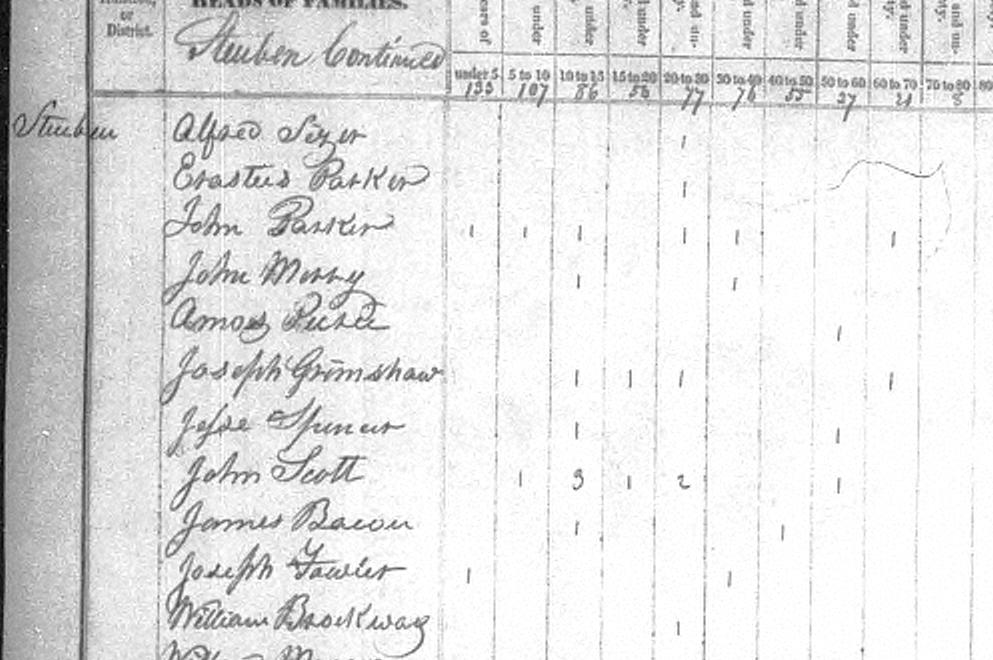 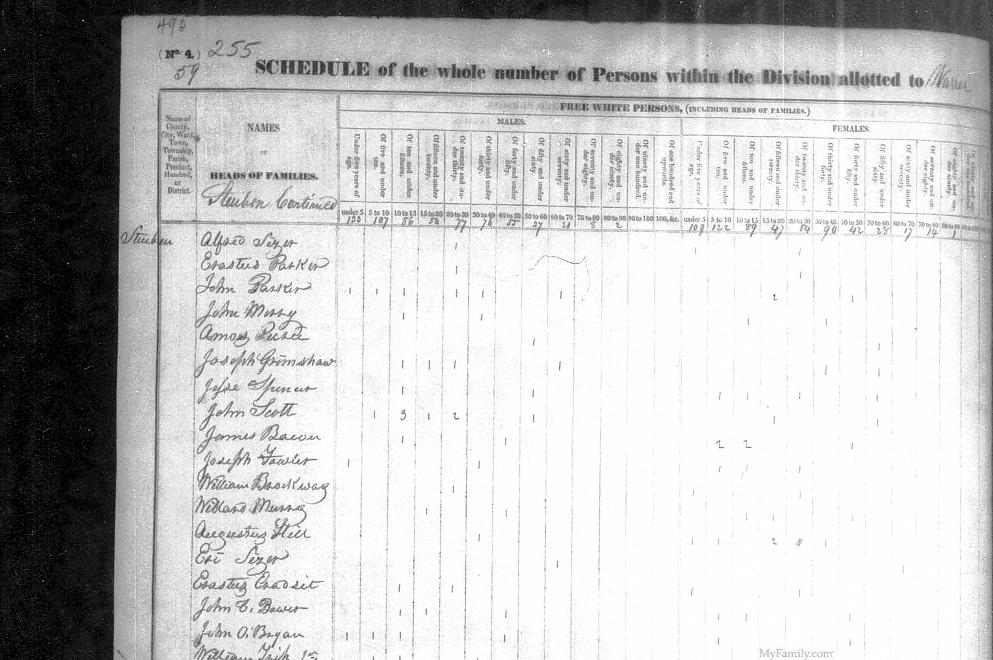 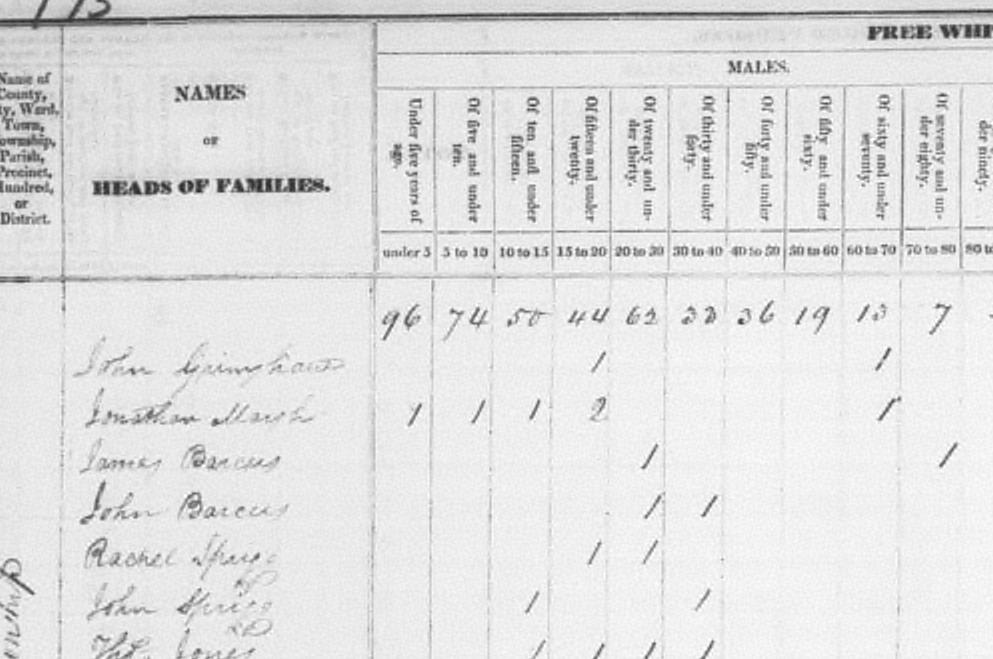 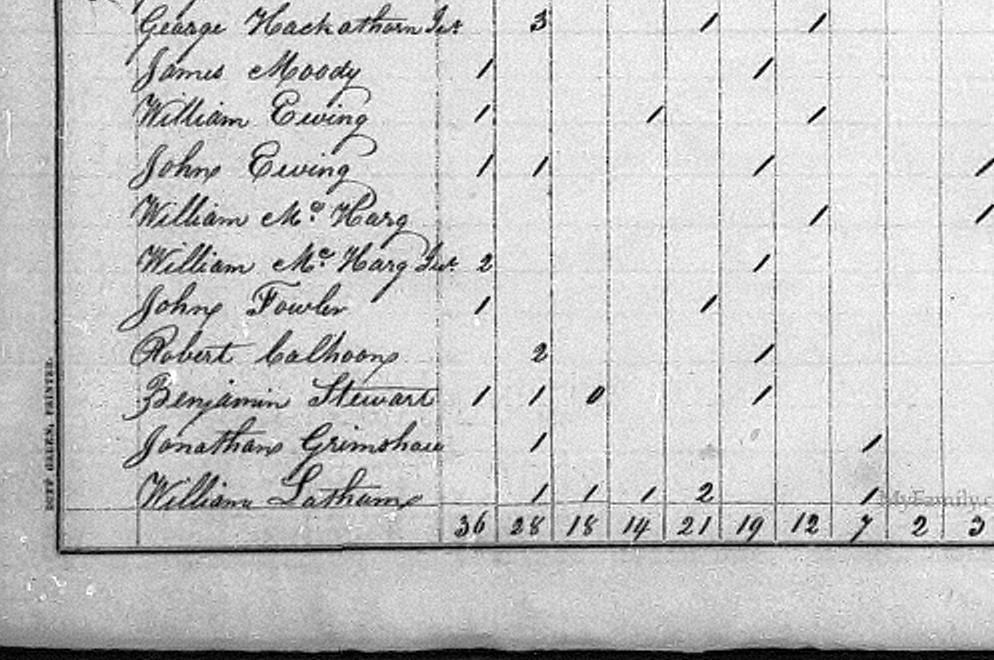 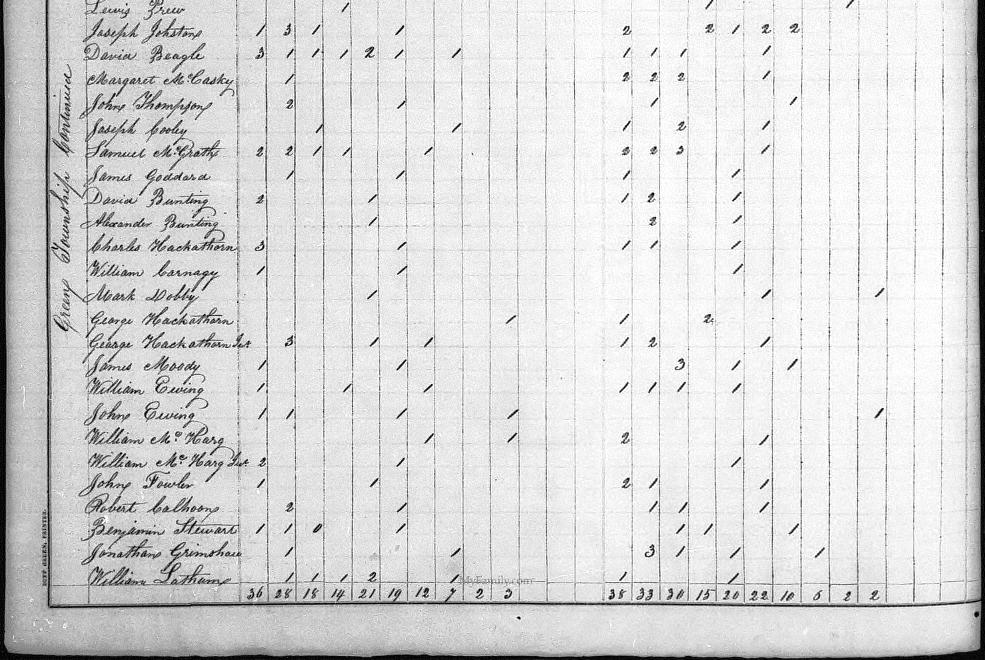 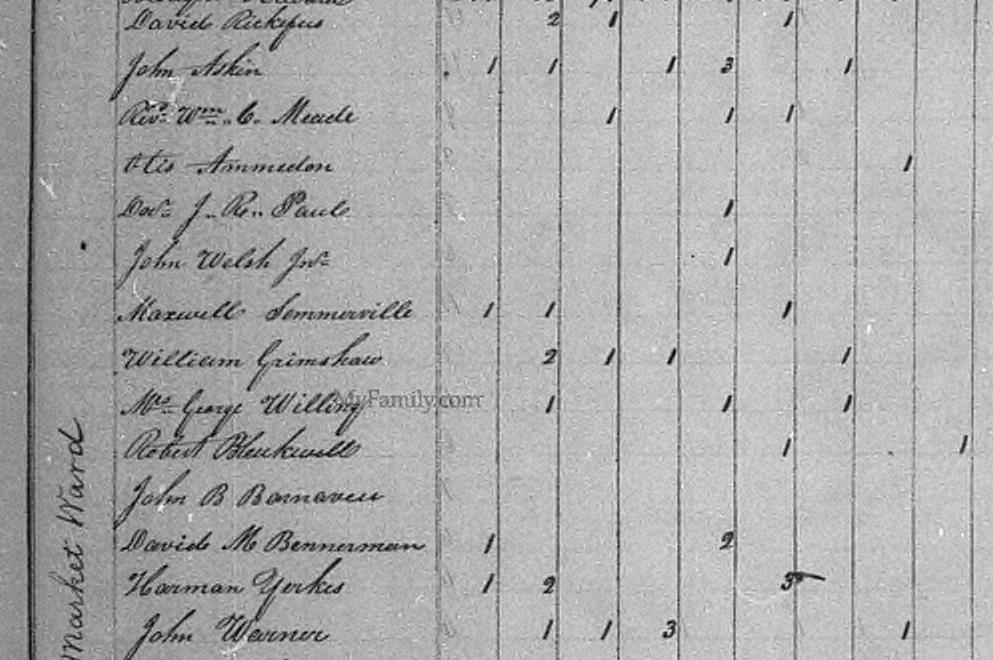 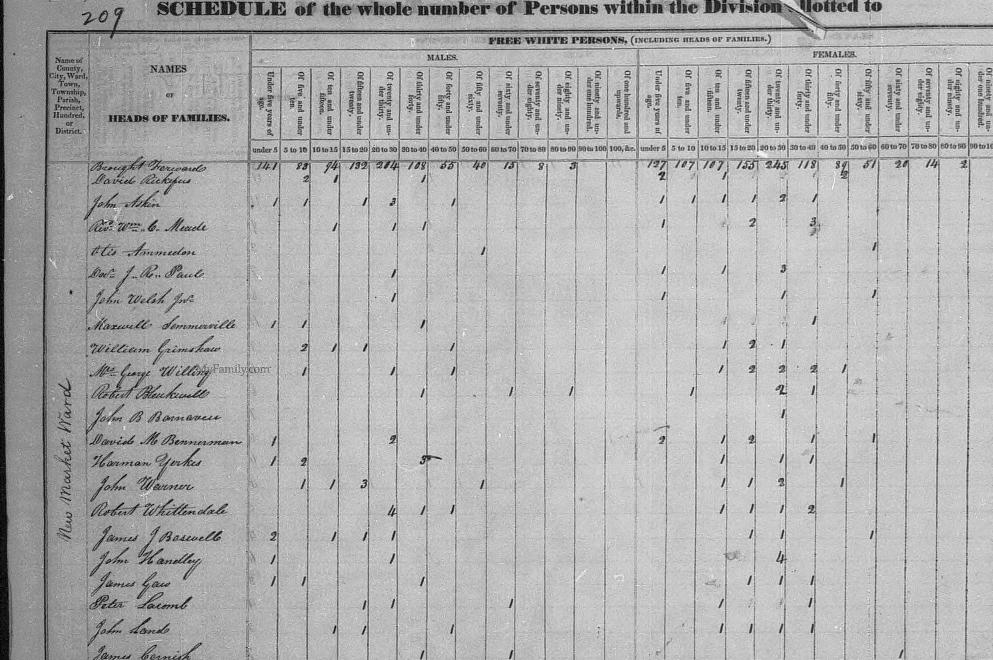 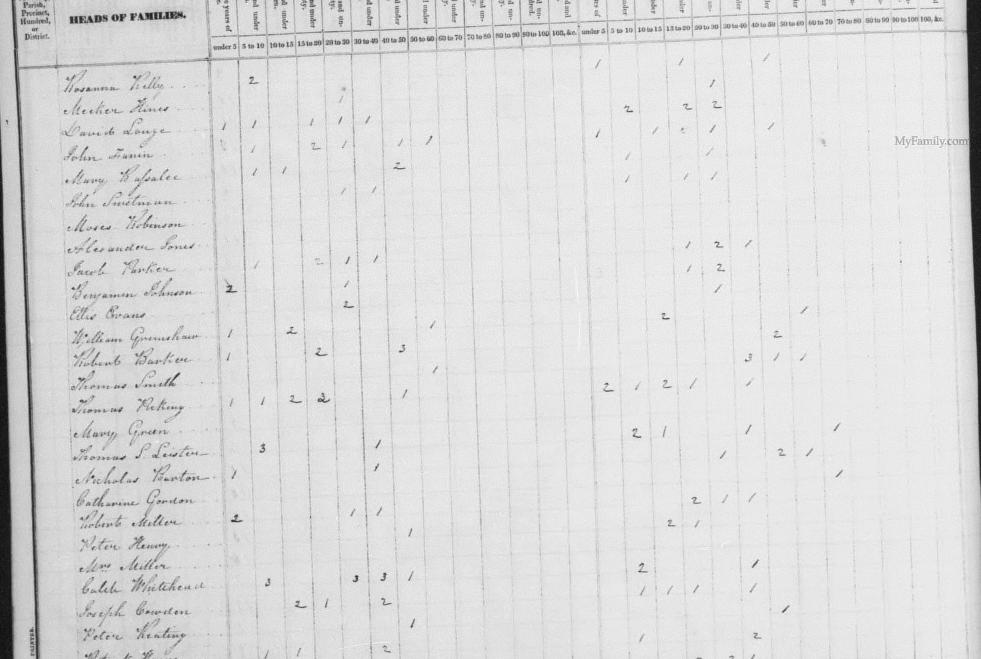 This database details those persons enumerated in the 1830 United States Federal Census, the Fifth Census of the United States. In addition, the names of those listed on the population schedule are linked to the actual images of the 1830 Federal Census, copied from the National Archives and Records Administration microfilm, M19, 201 rolls. (If you do not initially find the name on the page that you are linked to, try a few pages forward or backward, as sometimes different pages had the same page number.)

Enumerators of the 1830 census were asked to include the following categories in the census: name of head of household, number of free white males and females in age categories: 0 to 5, 5 to 10, 10 to 15, 15 to 20, 20 to 30, 30 to 40, 40 to 50, 50 to 60, 60 to 70, 70 to 80, 80 to 90, 90 to 100, over 100; the name of a slave owner and the number of slaves owned by that person; the number of male and female slaves by age categories; the number of foreigners (not naturalized) in a household; and the number of deaf, dumb and blind persons within a household. The categories allowed Congress to determine persons residing in the United States for collection of taxes and the appropriation of seats in the House of Representatives.

U.S. Federal Census index. For details on the contents of the film numbers that have not been linked yet, visit the following N.A.R.A. web page: N.A.R.A.. The linked images for these rolls of film will be made available on Ancestry.com in the near future. This database is certain to prove useful for those seeking early American ancestors.

The official enumeration day of the 1830 census was 1 June 1830. All questions asked were supposed to refer to that date. The count was due within six months, but the due date was extended by law to allow completion within twelve months. By 1830, there were a total of twenty-four states in the Union, with Missouri being the latest edition. The new territory of Florida also had its first census in 1830. There are no state or district wide losses, however, there were some countywide losses in Massachusetts, Maryland and Mississippi.

Before the automated search capabilities became available on Ancestry.com, a manual search of printed census indexes was performed, as described on a companion webpage. The results of this search for the 1830 index (and a prior census) are summarized below.

Several additional Grimshaws appear in this list that were not found in the search of the Ancestry.com database for Grimshaws and Grinshaws.