1810 U.S. Census Records for Grimshaws as Recorded on Ancestry.com

The website Ancestry.com offers online images of the entry pages of many of the censuses of the U.S., including the 1810 census. The 1810 census has been indexed by “head of household”. A search of the index for “Grimshaw” and “Grinshaw”  yielded a total of 8 entries. The Ancestry.com website address for the census search service is shown below.

Grimshaws Listed in the 1810 U.S. Census

Images of Grimshaw Entries in the 1810 Census

Description of the 1810 Census

Grimshaws Listed in the 1810 U.S. Census

Images of Grimshaw Entries in the 1810 Census

For each Grimshaw entry in the census, an attempt was made to obtain the associated online image. The five images for William Grimshaw were not available, but they have been obtained from another source and can be viewed on a companion webpage. William was apparently from Canada and fought in Hazen’s Regiment in the U.S. Revolutionary War before settling in New Hampshire (see companion webpage).

The other three were located and have been posted below. A larger image of the entry is provided first, followed by a more complete portion of the page on which the entry appears, including the number of male and female members of the household. The age categories for males and females are as follows: less than 10 years old, 10 to 15, 16 to 25, 26 to 44, and 45 or older. Two additional columns are for “All Other Free Persons” and “Slaves”. 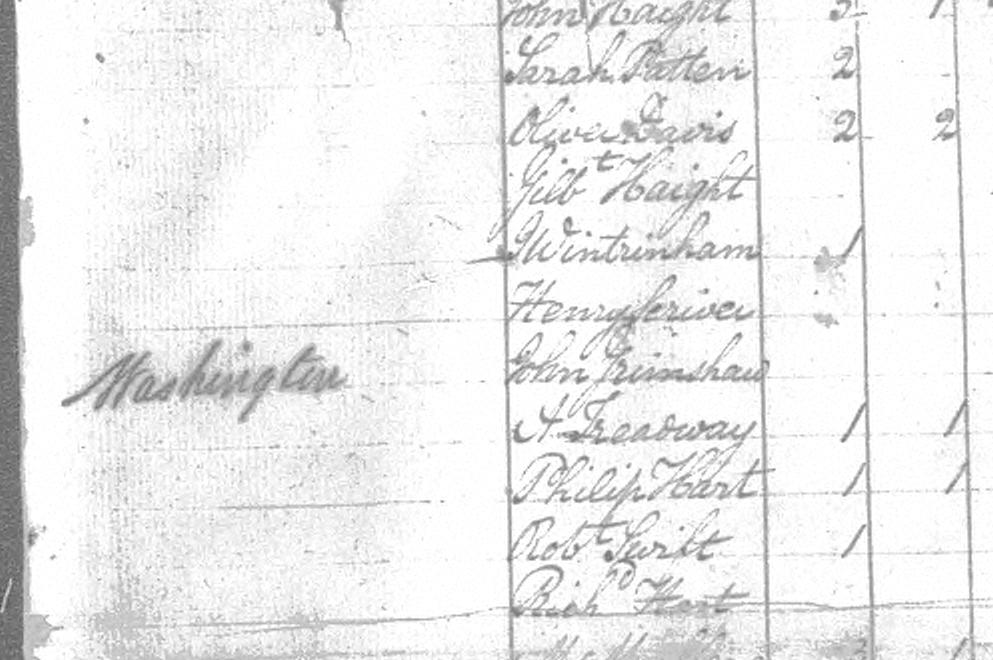 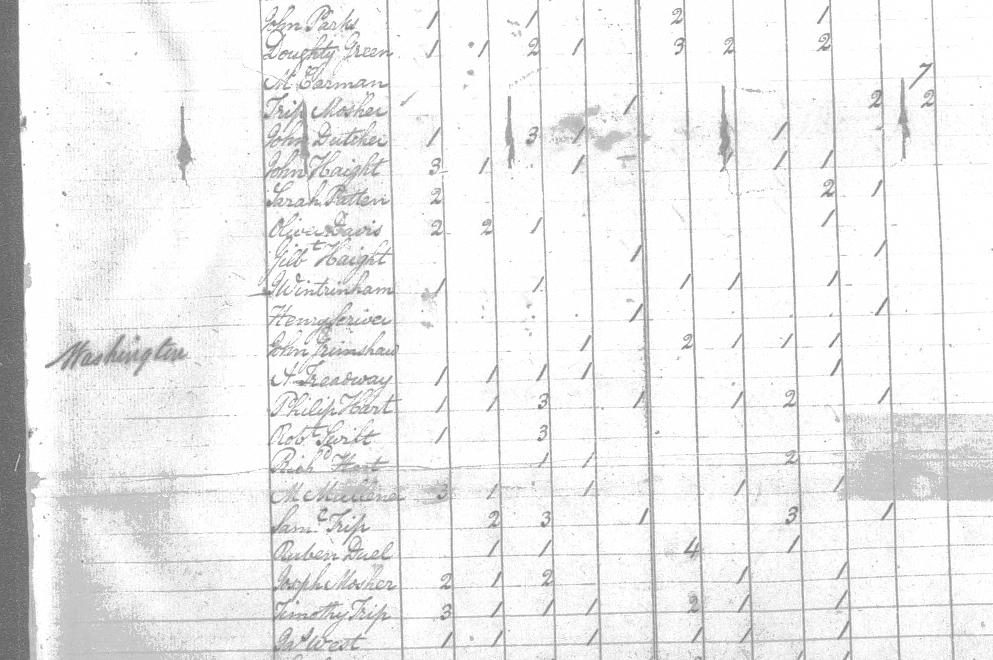 The following images show that there was one male over 45 and one less than 10 years old in the household. There were also two females, one between 26 and 44 and the other between 10 and 15 years old. There may also have been a third member of the household. 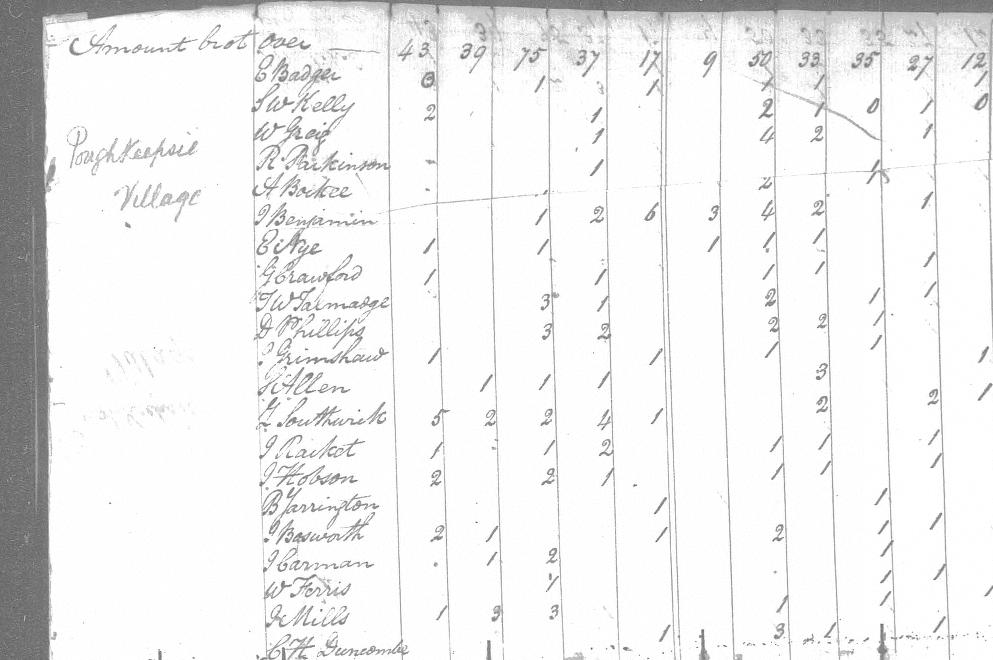 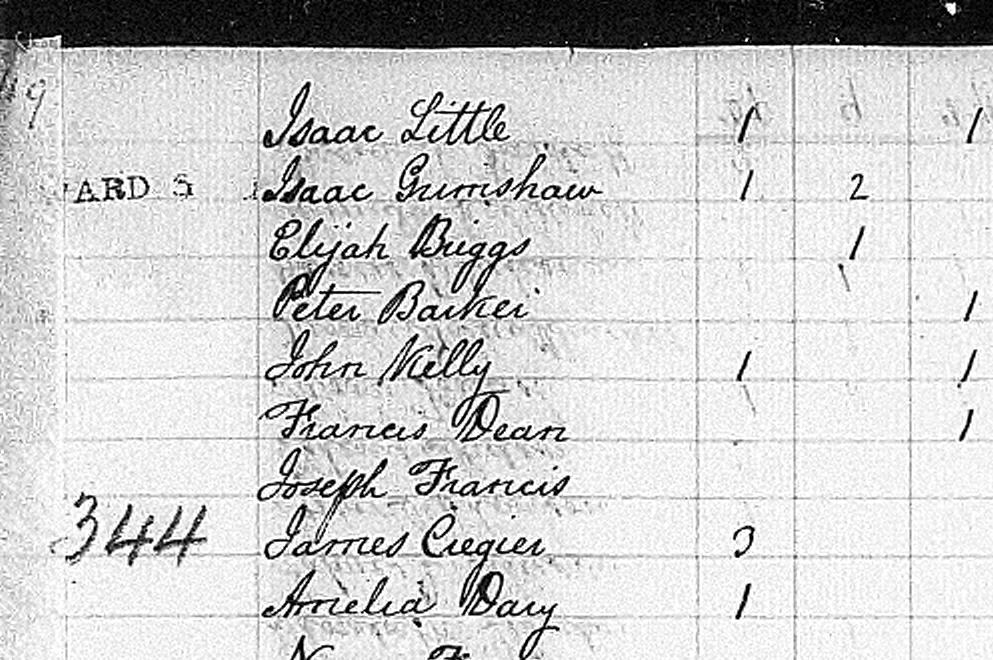 This database details those persons enumerated in the 1810 United States Federal Census, the Third Census of the United States. In addition, the names of those listed on the population schedule are linked to the actual images of the 1810 Federal Census, copied from the National Archives and Records Administration microfilm, M252, 71 rolls. (If you do not initially find the name on the page that you are linked to, try a few pages forward or backward, as sometimes different pages had the same page number.)

Enumerators of the 1810 census were asked to include the following categories in the census: name of head of household, number of free white males and females in age categories: 0 to 10, 10 to 16, 16 to 26, 26 to 45, 45 and older; number of other free persons except Indians not taxed; number of slaves; and town or district and county of residence. The categories allowed Congress to determine persons residing in the United States for collection of taxes and the appropriation of seats in the House of Representatives. Most entries are arranged in the order of visitation, but some have been rearranged to appear in alphabetical order by initial letter of the surname. Manufacturing schedules are scattered among the 1810 population schedules. This database is certain to prove useful for those seeking early American ancestors.

The official enumeration day of the 1810 census was 6 August 1810. All questions asked were supposed to refer to that date. The enumeration was to be completed within nine months, but the due date was extended by law to ten months. Schedules exist for 17 states and District of Columbia, Georgia territory, Mississippi territory, Louisiana territory, Orleans, Michigan territory, and Illinois territory. There was, however, a district wide loss for District of Columbia, Georgia, Indiana Territory, Mississippi Territory, Louisiana Territory (MO), New Jersey and Tennessee. Partial losses included Illinois Territory, which had only two counties (Randolph is extant, St. Clair is lost.), and OH, all lost except Washington County. Some of the schedules for these states have been re-created using tax lists and other records.

Before the automated search capabilities became available on Ancestry.com, a manual search of printed census indexes was performed, as described on a companion webpage. The results of this search for the 1810 index (and a prior census) are summarized below.

Several additional Grimshaws besides William in New Hampshire and John, George and Isaac in New York show up in this manual survey, including Samual, Thomas, Isaac and Willliam in Virginia, Robert in South Carolina, Abraham, Elizabeth and John in Illinois, John in Vermont, and William in Philadelphia, Pennsylvania.