Two artifacts at Edisord Hall. The one on the left may be the Grimshaw griffin (see below).

A Walter de Grimshaw is reported by Whitaker1 to have been the warden of a house for those afflicted with leprosy. The location of the leper house was at Edisford, just across the Ribble River (to the west) from Clitheroe, about 11 miles northeast of Eccleshill and on the opposite side of Blackburn and Clayton-le-Moors. Clitheroe can be seen on the regional map in relation to Blackburn and Belthorn (the closest identified point to the Grimshaw location in Eccleshill).

This Walter, who died about 1316-17, may be the one who started the earliest recorded Grimshaw family in Eccleshill. Whitaker provided a summary of the history of the hall, including the role of Walter de Grimshaw and the presence of an artifact with a griffin on it; excerpts from his work are given below.

Significance of the Grimshaw Griffin at Edisford

Photographs of the Grimshaw Griffin Artifact at Edisford?

Where Is Edisford Hall in Relation to Clitheroe and Grimsargh?

Thanks go to Russ Townson for sending the photo of the (probable) Grimshaw griffin artifact at Edisford Hall, shown in Figure 5 below. Thanks also to Mavis Long for her research on Edisford Hall and for providing the pictures of the artifacts.

The following excerpt, taken from Whitaker1 (v. II, p. 95-98,) describes the Walter de Grimshaw of Edisford and the presence of an artifact that is likely to be the “Grimshaw griffin.”

Whatever may have been the origin of that loathsome disease, the Elephantiasis, in England, whether it were contracted by some of the earlier crusaders, or, which is more probable, arose from want of cleanliness, and the exclusive use of salted animal food during a great part of the year, it seems to have been confounded by our ancestors with the unclean leprosy of the Mosaic law, and to have condemned the unhappy subjects of it to all the inconveniences of a legal separation. In this view retreats were charitably provided for lepers in various parts of the kingdom. And as the hospital of Edisforth was founded exclusively for the use of the borough of Clitheroe, and the state of population in those early times can never have been very considerable, it seems to prove the complaint to have been extremely common.

The first memorial of this foundation is a charter without date, which implies the prior existence of the hospital, and in which John, son of Ralph de Cliderhow, grants three acres of land in Sidhill “leprosis de Edisforth.”

In the next place Roger de Lacy, const. Cest. who died in 1211, for the health of his soul and those of his ancestors, gives to the same four acres of land in Baldwinhill (now Bawdlands, an outskirt of the town).

Walter de Grimshaw, warden, appears to have died about 10 Edw. II. [1316-7] when Richard de Edisforth was presented by the Earl of Lancaster. In his time there were no lepers, a proof that the complaint was on the decline, and he was sued for dilapidation and waste. Whether any other warden was presented after him I know not; but in 24th Edw. III. [1350] the house having now neither warden nor brethren, Hugh de Clitheroe, bailiff, entreated the abbot and convent of Whalley to take possession of the lands thereunto belonging, subject only to the condition of finding a chantry priest to celebrate in the chapel; this proposal was accepted, and the last memorial which I find of the place is that in 1508 John Paslew, abbot of Whalley, and the burgesses of Clitheroe, present Sir William Heerd to the Chapel of St. Nicholas of Edisforth, vacant by the death of Sir John Dineley, “secundum mortificationem ejusdem.”

The site of this ancient hospital was on the Yorkshire side of the Ribble, near the road to Mitton, and on the spot where now stands a farm-house. Some remains of strong and ancient masonry are remembered thereA.

[The Bridge at Edisford is represented in Turner’s distant view of Clitheroe, placed at page 255 of the First Volume. It was rebuilt in the last century.]

There was an ancient bridge here before the year 1339, at which date, it having been dangerously broken by various floods, royal letters patent were procured in order to legalise the taking of various tolls in aid of its repair, during the two years then next ensuing. This document, in which it is designated as “the Bridge of Ribble,” presents a curious list of the various articles of merchandise which it was expected would be carried over it. It is now published for the first time:

Of particular interest in the above excerpt is the footnote (signified by the superscript above) describing artifacts at the Edisford site:

AThere are also some rude armorial sculptures. One is of a griffin segreant, facing to the sinister. Another, on a shield, perhaps the rod with hyssop and the spear, in saltire. The former was mis-described by Dr. Whitaker in the last edition, p. 533, as the lion rampant of Lacy. By far the most curious however of these carvings is the Lacy fret, as here represented, corresponding it will be seen with that on the ancient seals of that family, from one of which it was probably copied

This “griffin segreant, facing to the sinister” is described much the same as the griffin on the Grimshaw coat of arms. The armorial sculpture must have existed at the Edisforth location in the 1800s according to Whitaker.

Significance of the Grmshaw Griffin at Edisford

Although griffins were one of the most common of armorial icons in medieval England, the presence of one at Edisford Hall where Walter Grimshaw was living could hardly be coincidental. If the griffin is indeed associated with Walter, then the coat of arms goes back at least to 1317 (the date of Walter’s death), about 300 years before it was sanctioned by Adam and Cecily at Clayton-le-Moors when a king’s herald visited in 1613.

Also, any connection of the griffin to the Grimshaw serpent (as asserted by Owen in his 1742 article) would have to be ruled out. As described on a companion webpage, the dragon-slayer was a Grimshaw from Clayton-le-Moors. Since Adam (great-grandson of Walter) didn’t move the Grimshaws from Eccleshill to Clayton-le-Moors until 1350, at least 35 years after Walter died, the griffin at Edisforth predates the earliest possible date for the serpent-killing event by at least that amount of time.

The modern-day Edisford Hall location is shown in Figures 1 to 4 below. All photos were taken May 2000.

Figure 1. Edisford House. A plaque on the fence pillar denoting this as the Edisford Hall location is on the left side of the photo. 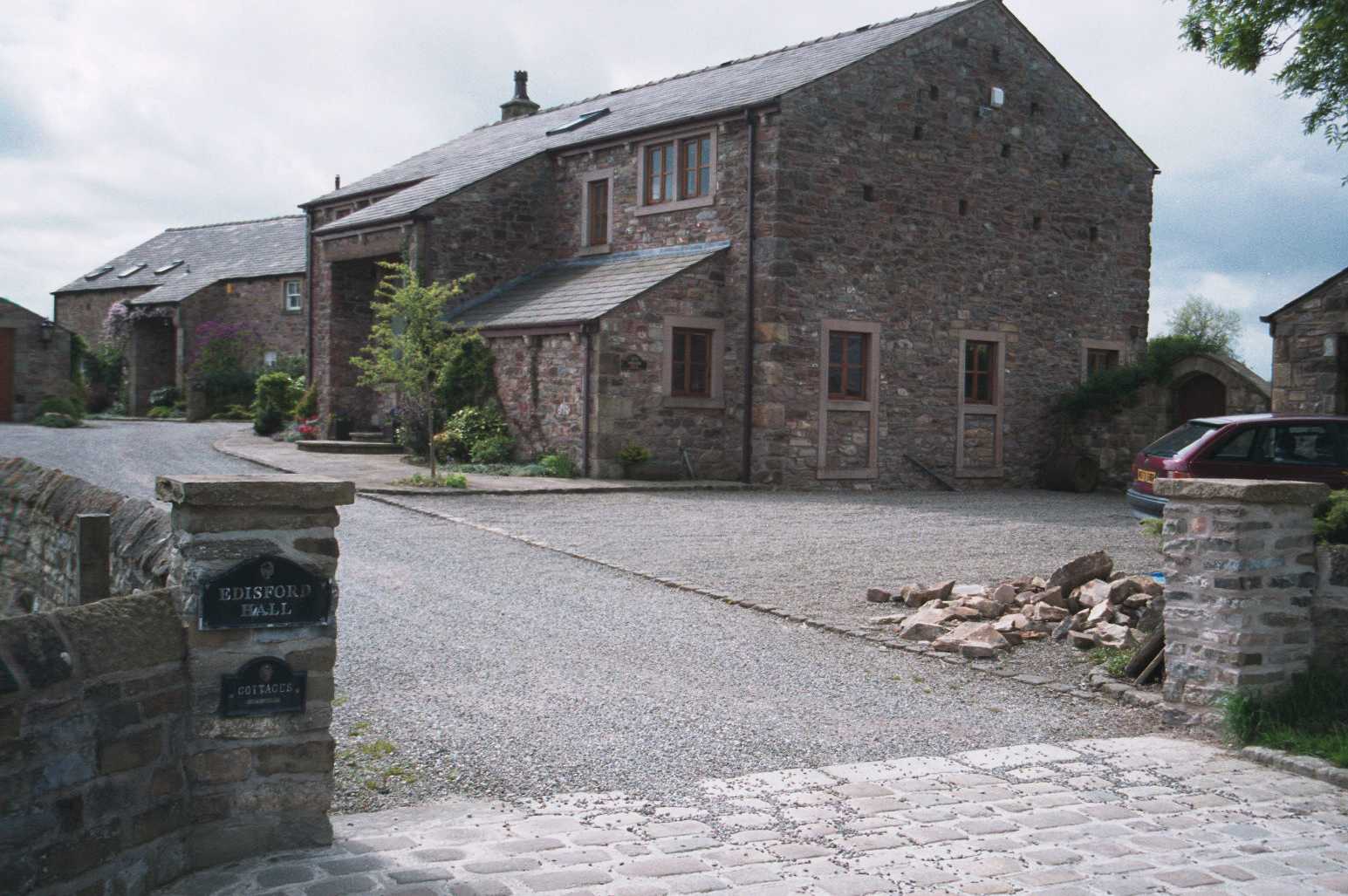 Figure 2. A close-up of another plaque, attached to the near corner of Edisford House as shown in Figure 1 above. 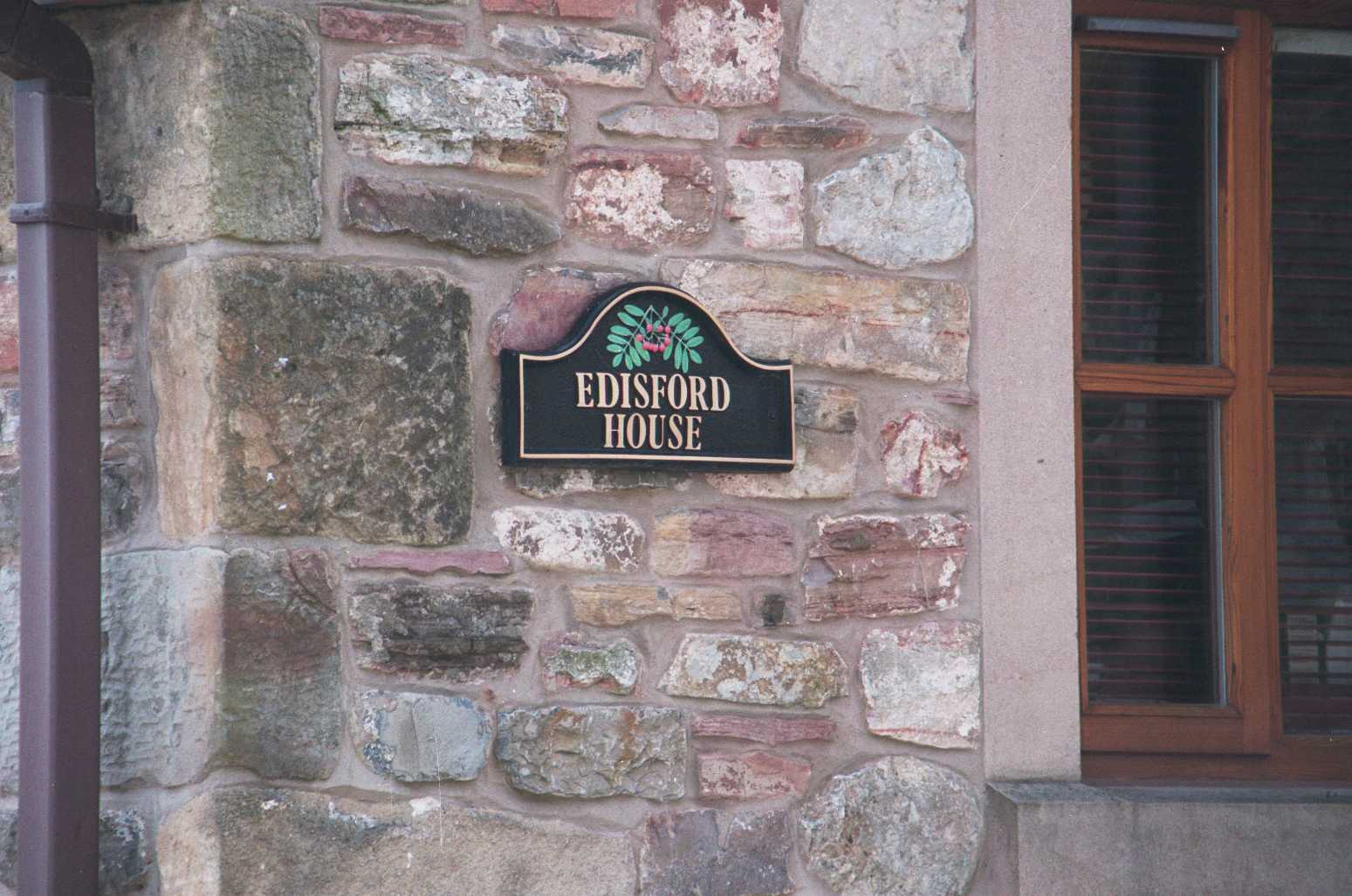 Figure 3. This photo is taken from the same place as the photo in Figure 1, but in a somewhat different direction (the plaques and the fence pillar are the same in both photos). With the two buildings visible in Figure 1 and in the photo below, there are at least three major structures at the Edisford Hall location. 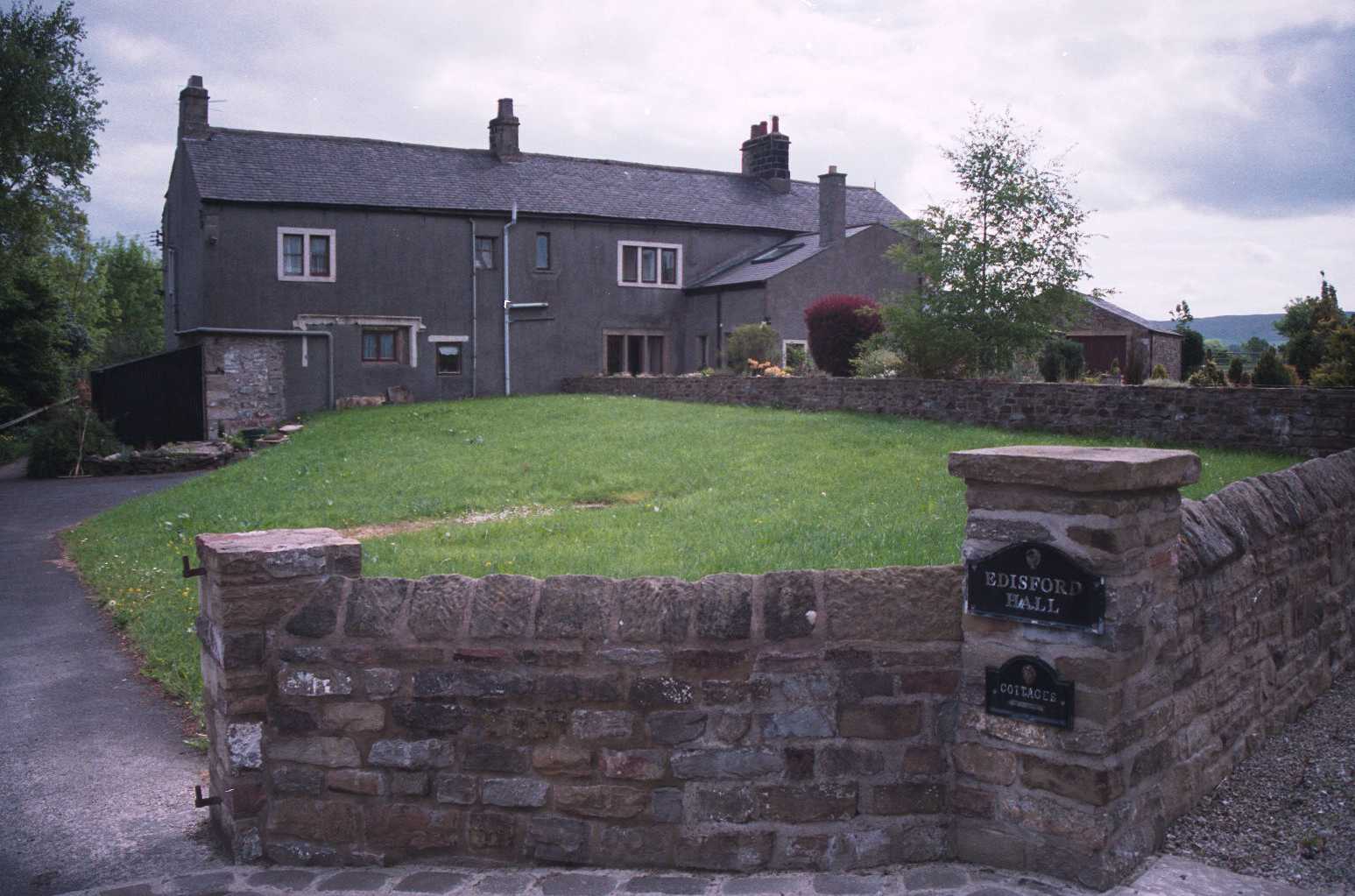 Figure 4. Nearby Edisford Bridge across the Ribble River. Clitheroe is located behind the trees on the other side of the river. 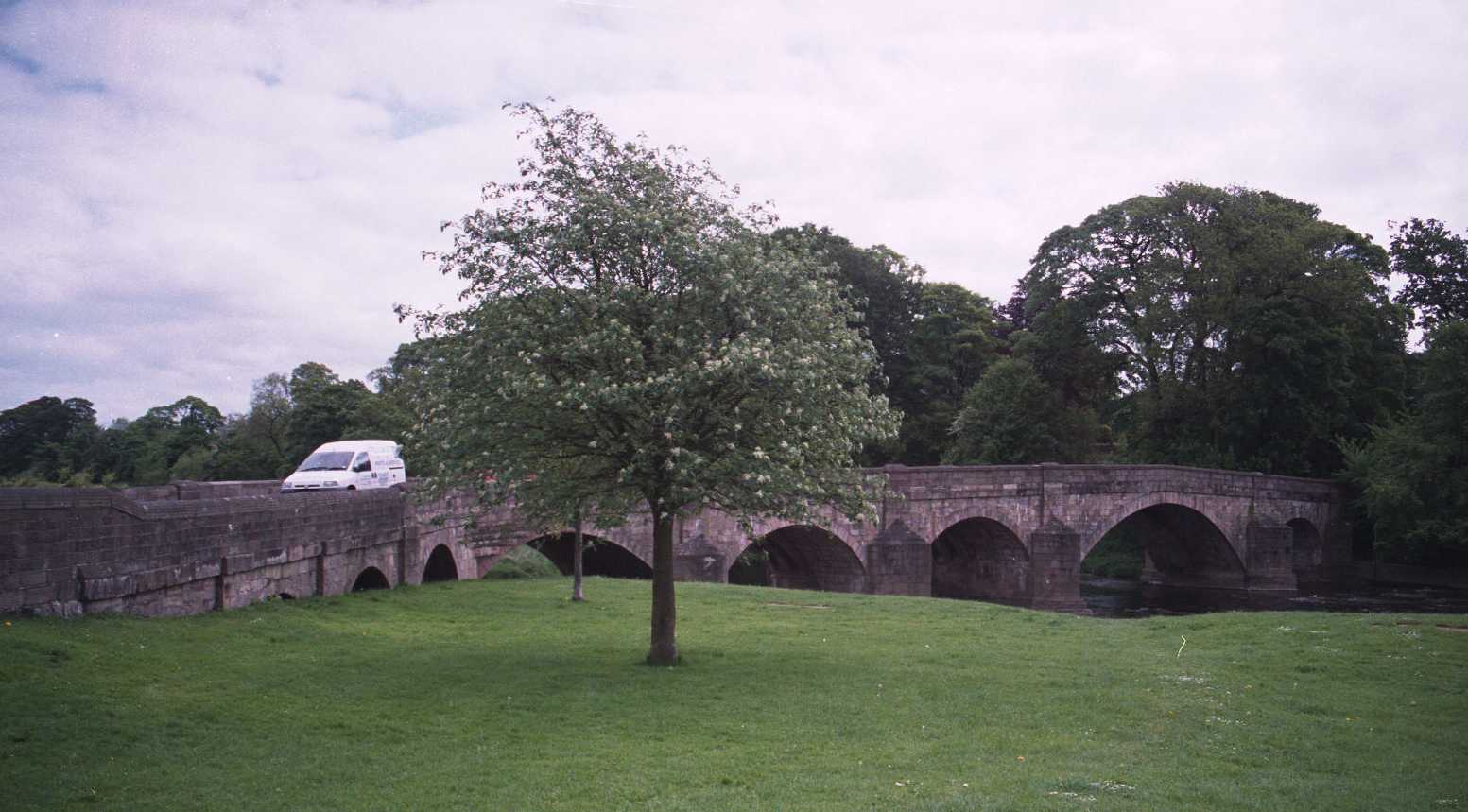 Photographs of the Grimshaw Griffin Artifact at Edisford?

In January 2002, Russ Townson provided the remarkable photo shown in Figure 5, which seems very likely to be the “… rude armorial sculptures. One is of a griffin segreant, facing to the sinister. Another, on a shield, perhaps the rod with hyssop and the spear, in saltire” as described above by Whitaker1. Note that the left block appears to be rotated 90 degrees clockwise, and the griffin is facing to the right rather than the left.

Figure 5. Photo of artifacts believed to be the ones described in 1872 by Whitaker. Thanks go to Russ Townson for providing this invaluable photo. 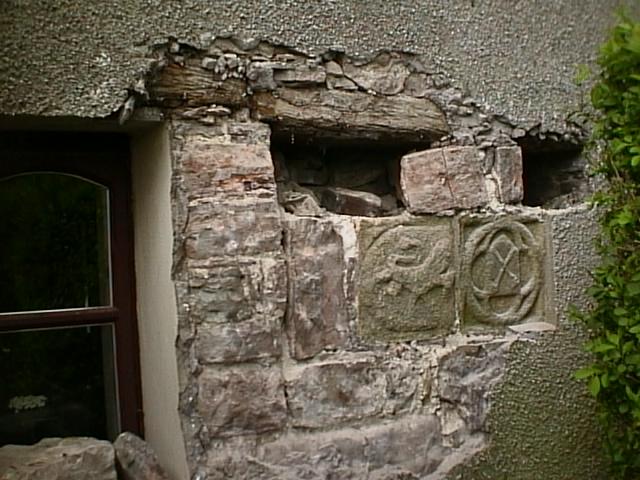 Mavis Long visited Edisford on March 16, 2006 and kindly provided pictures of these artifacts from her visit (Figure 6).

Figure 6. Mavis at Edisford Hall. Mavis and a friend confirmed that the icon on the left appears to be a griffin. Both artifacts have been placed further up in the building. which is constructed of beautiful stonework. A visit with a patron at a nearby pub revealed that some of the old beams at Edisford Hall date back to the 12th century. 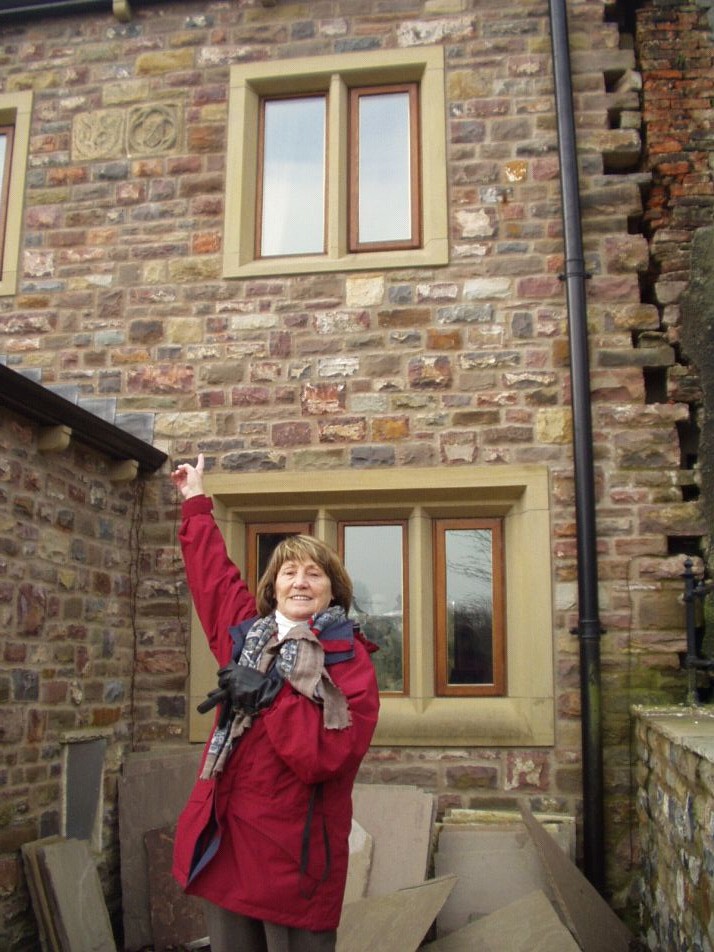 Closer view of the two artifacts. 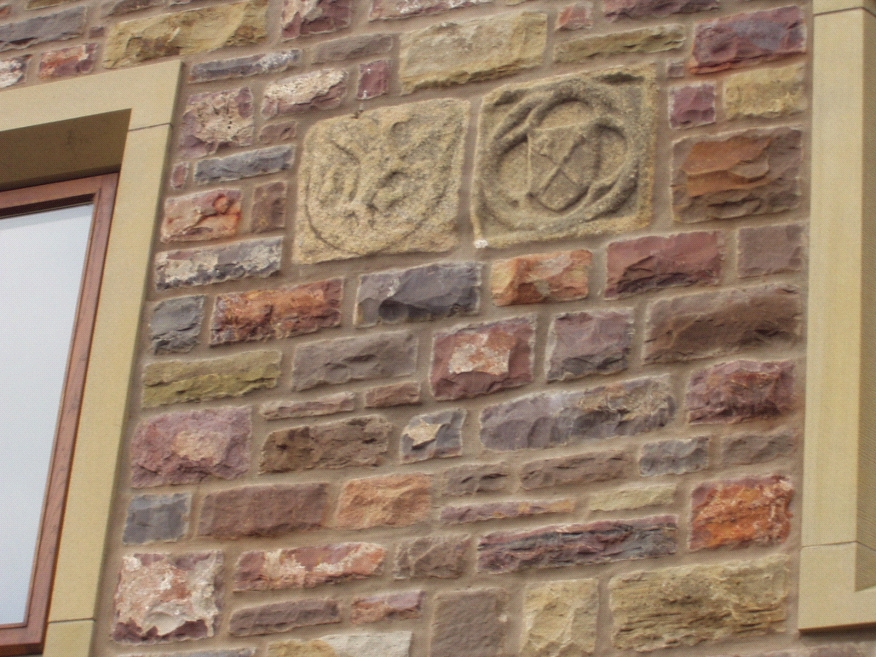 Enlarged image from the above photo (also shown at the top of this webpage). 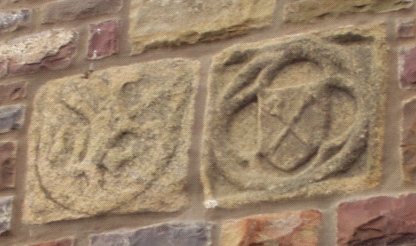 Where Is Edisford Hall in Relation to Clitheroe and Grimsargh?

Edisford is located west of Clitheroe just across the Ribble River at the location of the picnic table symbol in the following smaller-scale maps (above). More detailed, larger-scale maps of the hall are shown in the two larger scale maps below. 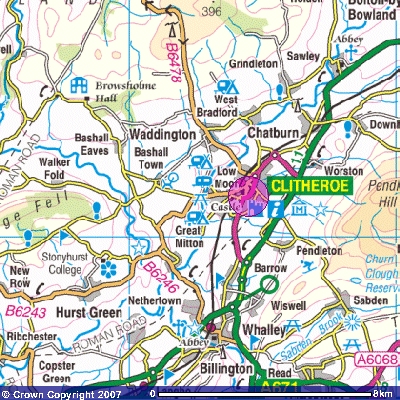 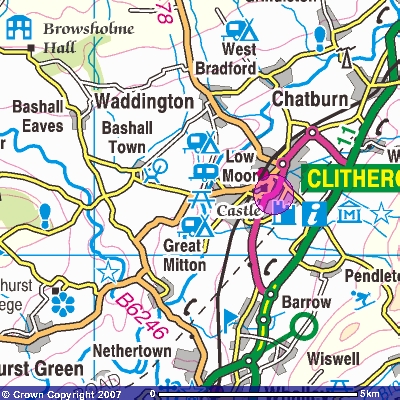 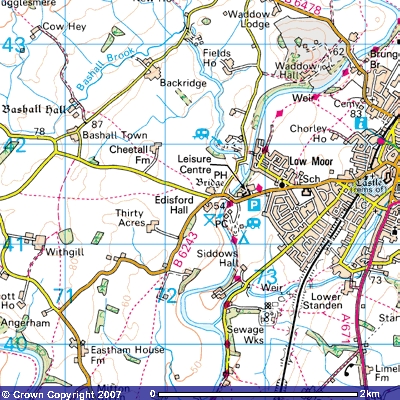 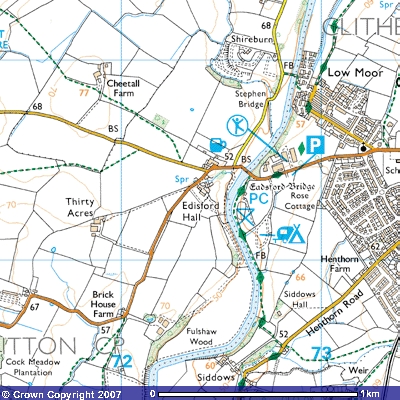 The location of Edisford Hall in relation to Grimsargh (about 12 to 14 km to the northeast) can be determined on the following map, by comparison with the upper left map above. Edisford Hall is located just north of Great Mitton. 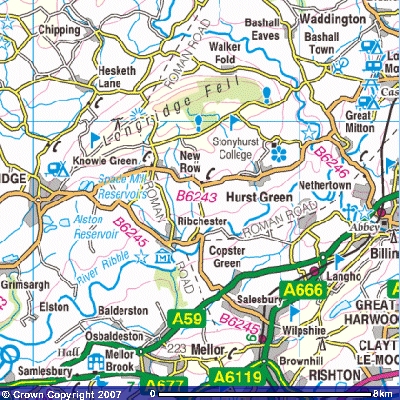