1877 Articles on the Pendle Forest Line of Grimshaws

In September 1877 The Preston Guardian, the principal newspaper of Preston during that time, published a series of four articles on the Pendle Forest Grimshaws1,2,3,4, culminating in a description of the life of Nicholas Grimshaw. Nicholas was mayor of Preston seven times, including two terms as Guild mayor. These articles provide a great deal of highly relevant Grimshaw family history and are provided on this webpage as a resource for Grimshaw family researchers. The author is not identified in the articles, but has been identified by Hilary Tulloch as William Alexander Abram.

Who Authored the Articles?

Thanks go to Hilary Tulloch for bringing these articles to the attention of the website author. Copies of the articles were obtained from microfilm at the main library in Preston in May 2000. Thanks also to Hilary for supplying the information on the authorship of the articles.

The Preston Guardian articles cover a great deal of Grimshaw family history, starting (briefly) with the earliest recorded family at Grimshaw in Eccleshill and then Clayton-le-Moors. Nearly all of Whitaker’s5Pendle Hill descendant chart is described to some level of detail. The articles are best reviewed with a the descendant chart at hand; a copy is provided below in two parts. 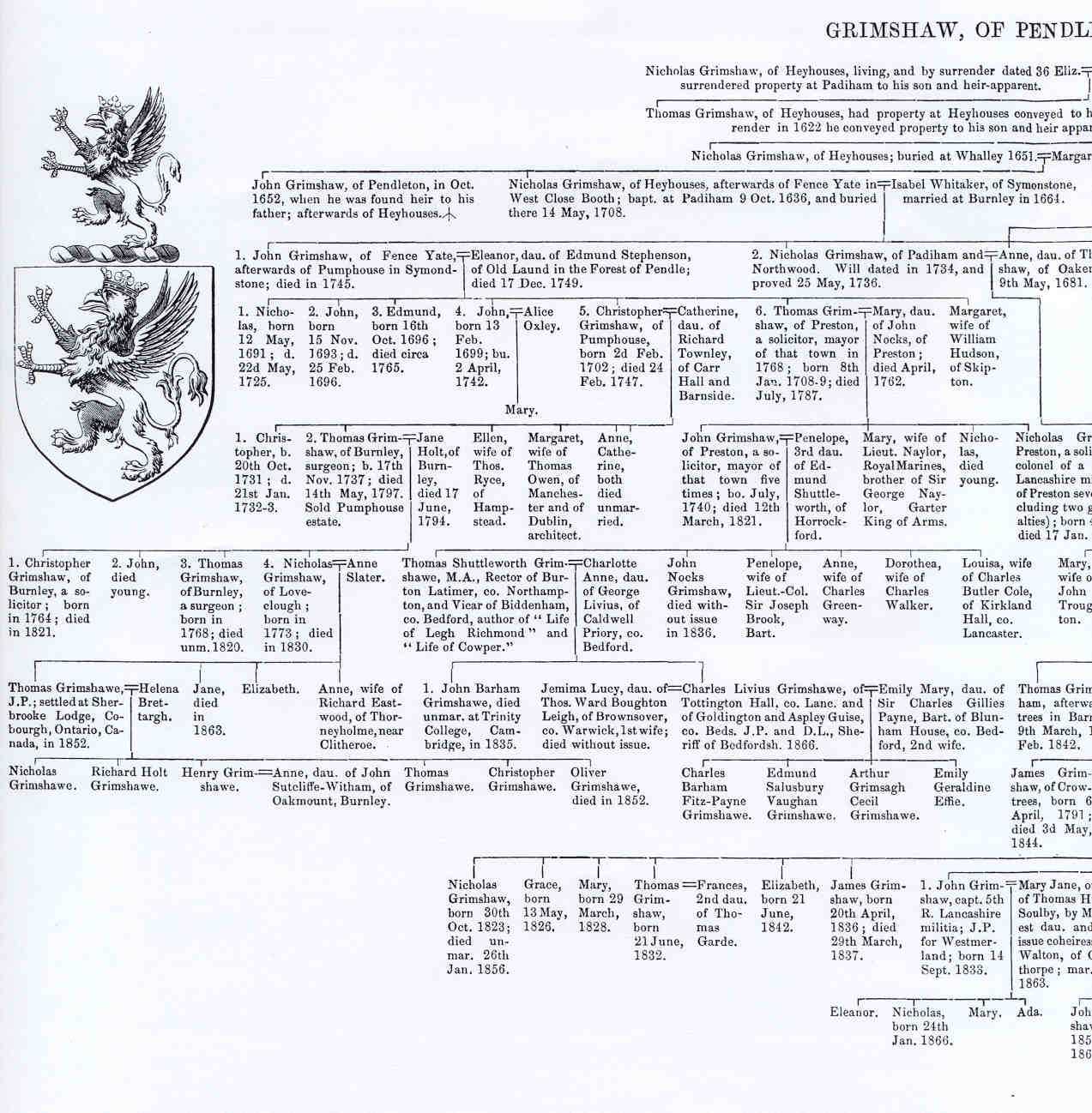 Who Authored the Articles?

Hilary Tulloch has found two references that identify the author of the articles as William Alexander Abram:

1. ‘Grimshaws of Preston. For most of the particulars of this family I am indebted to the late W.A. Abram’s notice in the “Preston Guardian” in 1877.’ History of the Parish of Preston, Henry Fishwick, 1900, London: The Aldine Press.

2. Abram, Wm Alexander, FRHS, (1882) Memorials of the Preston Guilds, Preston: George Toulmin: Note: W A Abram Editor of ‘Sketches in Local History’ in the Preston Guardian. p.10 ‘In 1397, the use of surnames had become general in this part of England, which they were far from being when the Guild Merchant of 1328 was held near seventy years before … The local surnames of the second half of the fourteenth century were mostly of four descriptions; first, those derived from the locality to which the family was attached, with the prefix “de”; secondly, a few Norman surnames; thirdly, those which denoted businesses or occupations, with the prefix “le”; and, fourthly, those formed out of the paternal or maternal name, with the affix “son”. Of the first kind, borne in the first instance by the owners of landed estates and their kindred and descendants …’

The family of the Grimshaws, which in two or three of its later representatives was among the foremost in the Municipal annals of Preston in the second half of the last century and early part of the present century, was a branch of an ancient stock with freeholding proprietors in North-East Lancashire, which became possessed by a marriage of the manor of Clayton-in-le-Moors in the era of the Plantagenets, and thereafter was reckoned among the best of the county gentry. The original settlement of this old family, from which it took its surname, was a tenement in the Parish of Blackburn, about three miles to the south-east of Blackburn town. On the ordnance map may yet be found the name of Grimshaw attached to a tenement lying near the Hoddlesden brook, in the hollow between the steep acclivity of Yate Bank on the east and the more gradual slope of Eccleshill on the west. This is the obscure place in which the Grimshaws primitively subsisted, and which supplied the race with its name – De Grimshaw – when surnames came to be fixed in families. The olden orthography of the name is Grymeshagh or Grymeshawe – the suffix of shaw signifies a woodland in Saxon; and this narrow glen was once densely wooded from its upper edge above Hoddlesden village down to Woodhead, and Grimshaw. The other surname of Grime, still common in the same locality, is merely a shortening of Grimshaw by dropping the suffix.

The principal stock of De Grimshaws occurs as early as the year 1276 when Richard de Grymeshagh held the tenement, which before had been held by his father, Walter. The estate in Eccleshill continued to pertain to the Grimshaws of the main descent as far onward as the latter years of the 17th century; but after the marriage of Adam de Grimshaw with Cicely de Clayton, daughter and sole heiress of Henry Clayton, the residential mansion of the Grimshaws was Clayton Hall, in the Vale of Calder, the manor house of Clayton-in-les-Moors; and there they continued until the principal stock terminated in an heiress, Mary Grimshaw, wife of John Heywood, of Urmston, whose daughter, Rebecca, marrying Richard Lomax, Esq., carried Clayton Manor to the Lomaxes, its present lords.

It is with a junior line of Grimshaws that we have to do in this article, namely, the Grimshaws seated in Pendle Forest in the reign of Henry the Eighth, and the branch of that family which settled in Preston about a century and a half ago. We have not been able to ascertain positively the link of connection with, or the point of detachment from, the Grimshaws of Clayton Hall, of the Grimshaws of Pendle Forest, albeit the fact of the common ancestry may be safely taken for granted. We think it most likely that Nicholas Grimshaw, living in 1481 (younger brother of Henry Grimshaw, of Clayton Hall, who died in 1507) was progenitor of the Pendle Forest Grimshaws; this surmise is chiefly based upon the circumstance that “Nicholas” appears to have been a favourite Christian name in this family in every successive generation from the reign of Elizabeth to the present time.

The first member with which a careful pedigree of Grimshaw of Pendle Forest, inserted in the new edition of Whitaker’s “History of Whalley,” commences, is Nicholas Grimshaw, living in 1593. But we have met with references to Grimshaws resident in Pendle Forest more than half a century prior to that date. These we note below before proceeding to show the descent of the Preston Grimshaws from Nicholas Grimshaw last-named.

In the time of Henry VIII one George Grimshaw resided upon a copyhold estate at Moor Hills in the Forest. He was apparently the father of Richard Grimshaw, to whom documents printed below refer. George Grimshaw died before the year 1554, when his widow, Ann Grimshaw, was living. She had a suit with Richard Grimshaw, probably her son, in the Duchy Court, as to her widow’s share of her husband’s goods and chattels. In the Calendar to Pleadings in the Duchy Court the record appears:- “1 and 2 Phil. and Mary (1554), Anne Grymeshay, Widow, late wife of George Grymeshay, plaintiff, against Richard Grymeshay, of Mawer Hyles, administrator of the goods of Geroge Grymeshay, deceased, defendant, in the disputed claim to the widow’s moiety of goods and chattels, the defendant claiming by deed of gift.”

Richard Grimshaw, of Moor Hills, also described as of New House in Pendle Forest, who is first met with as above in the year 1554 and was evidently either son or brother of George Grimshaw, occurs at several dates in the 54 years between the first allusion and the date of his death in 1608. Besides the copyhold of Moor Hills, which he had no doubt in succession to George Grimshaw, Richard Grimshaw acquired in conjunction with Nicholas Halsted, a freehold in Twiston, near Downham, by conveyance from Richard Asheton, Esq., lord of Downham. This was before 1559; for in the 2nd Elizabeth, Richard Grymeshawe and Nicholas Halstide, claiming by conveyance from Richard Asshetown (Assheton) had a suit-at-law with Thomas Bentown (Bentham) and Richard Cauverly, respecting the estate of “Twistown,” consisting of a messuage, with lands, pasture, and appurtenances. Three years afterwards (1562), the same plaintiffs sued Thomas Bentham to obtain possession of a tenement in Downham, claimed by plaintiffs by conveyance from Richard Assheton. Richard Grimshaw is named again, this time as tenant under Ightenhill Manor, in the 13th Elizabeth (1570), when there was a litigation in the Duchy Court, between Anne Towneley and Edward Towneley her son, claiming by descent of inheritance, and John Towneley, Richard Grimshaw, and others, the Queen’s Tenants of the town of Burnley, for possession of “a capital messuage and lands called Royell and Rycelhill [now called Royle, below Burnley], and other specified lands in Burnley, Pendle Forest, &c., and as to right of way through Filly Close to Royhill Wood and Blind Lane, over the common of Saxefield to the Town of Burnley. In the 19th Elizabeth (1576) there was a suit in the Duchy Court of Lancaster, wherein John Towneley, Esq., was plaintiff, and Richard Grymshawe defendant, with respect to ownership of a messuage and appurtenances called Mawrehills and Filly Close, in Pendle Forest, within the Manor of Ightenhill. In the 34th Elizabeth (1591), Richard Grymeshay or Grimeshaw, Christopher Jackson, Greave of Pendle Forest, John More, and Richard Kepax, were plaintiffs in the Court of th eDucy, against John Nutter, in right of William Radcliffe, in a claim to right of Free and Royal Highway to Church, Fairs, and Markets, and particularly to the Chamber of Pendle or Housecliffe, in the Manor of Ightenhill. Dated 30th June, 2nd Elizabeth (1559), is a deed of partition between Richard Grimshaw of Mawerhiles and Nicholas Halsted of Northwood of lands in Twiston and Downham; and on the 31st January, 2nd Eliz., the said Nicholas Halsted gives a release to Richard Grimshaw. Richard Grimshaw must have been twice married; and his first marriage must have taken place not later than from 1550 to 1560, for he had a granddaughter married before 1603. By his first wife (who was perhaps a Coulthurst, for Richard Grimshaw names Henry Coulshurst as his brother), he had know issue a daughter, who became the wife of one Killingbeck, and had sons, Robert and William, and a daughter Jane. Richard Grimshaw’s second wife was Ellen, daughter of Thomas Emott, gent. of Emott Hall, near Colne. This member of the Emotts is before any named in the pedigree of the Emotts in the “History of Whalley” (new edition), and he had sons, John Emott (of Emott, gent., in 1600), and William Emott of Wycoller, living in 1608. Thomas Emott the father is named as of Emott in a list of free tenants dated 1584. By Ellen Emott, his second wife, Richard Grimshaw had issue two daughters, Jenet, who was wife of John Woodroffe of Burnley (she died before her father), and Elizabeth, who was only surviving daughter and heir of Richard Grimshaw, unmarried when the father died, but whose subsequent marriage will be hereafter noticed.

Richard Grimshaw, though only ranking as a yeoman, by some means or other (perhaps in trade) possessed himself of considerable money, and at his death, as seen in the inventory below, he had some hundreds of pounds owing to him by several of the most important local gentry. In 1580 he purchased estates at Stainton and Bank Newton, in Craven, co. York. In 1594, as attested by an inscription printed hereafter, he rebuild for his residence the house at Higham Booth in Pendle Forest, subsequently known as “The Fence,” and “Hachiller House,” but in the time of its builder called “New House.” Richard Grimshaw died about midsummer, in 1608. He was a very old man, very likely nearly, if not more than, 80 years old when he died; for we have seen above that he was in possession of his estate at Moorhills in 1554, which was 54 years before his decease. His youngest daughter Elizabeth was, however, still in her nonage in 1608. The documents appended, which include Richard Grimshaws Will, the Inventory &c. have been transcribed from copies lent to the Editor of this sketch by Mr. William Haworth, of Fence in Pendle.

The Will of Richard Grimshaw, dated June, 1608, reads as follows:-

Richard Grimshaw the testator died soon after the execution of this Will, which was proved in the Prerogative Court of York on the 29th November, 1608 by the oath of Ellen Grimshey, Widow, the Relief, the sole Executrix therein named, to whom porbate was granted, she having been first sworn duly to administer. The subjoined Inventory of the personal effects of Richard Grimshaw affords some curious items:-