The Grimshaws of Gisburn Forest

The Grimshaws of Gisburn Forest in Northern Lancashire

Derrick Grimshaw has conducted extensive research on the Grimshaws of Gisburn Forest, a line of Grimshaws descended from Ottwell Grymeshey of Rimmington, which is located two miles southeast of Gisburn. Gisburn is located in northern Lancashire, northeast of Clitheroe and northwest of Colne.

Where is Gisburn Located?

Is the Ottwell Grimshaw Line Descended from the Pendle Forest Line?

Ottwell’s descendants are shown diagrammatically in Figure 1 below. Additional detail is provided further below on this webpage. It does not appear that Ottwell has yet been “tied back” to the Clayton-le-Moors or Pendle Forest line of Grimshaws.

Where is Gisburn Located?

Gisburn is in northern Lancashire and is located northeast of Clitheroe and northwest of Colne. Maps at two scales showing the location of Gisburn are shown in Figure 2.

Figure 2. Location of Gisburn (pink circle) in northern Lancashire as shown in small-scale and large-scale maps from the Ordnance Survey website.

I have been researching my family tree for about three years now and came across your website quite recently.

So, I have taken the liberty of letting you know what I have discovered about my own family. Maybe you have perhaps come across some of my ancestors from other people, if you have I should be most interested.

My earliest records date back to the very early 17th century.

The parish records at GISBURN show the baptism of ROGERUS GRYMESHEY in 1612, he was the son of OTTWELL GRYMESHEY, who at the time resided at RIMMINGTON, about 2 miles south east of Gisburn.

OTTWELL was apparently married twice but I have been unable to put a name to either of his wives. His first wife was buried at Gisburn May 10th 1602, possibly childless.

His second wife was buried 17th January 1633, but I have no record of Ottwell’s death.

Rogerus was also married twice but again I have no name for his first wife who was buried at Gisburn 11th November 1632.

His second wife was named ELLINA and was buried 27th March 1680.

This marriage produced four children, the first WILLMUS being baptised 11th March 1648 and was buried later that month.

A second son also named WILLMUS was baptised 30th November 1650, at the time of these two baptisms Rogerus is shown as living at HOWGILL, about 1 mile east of Rimmington. Even today all that there is at Howgill is one farm and a manor house. Rimmington is somewhat larger boasting at least a public house and several houses.

HUGONIIS was baptised at Gisburn 11th March 1655 followed by a daughter MARTHA baptised 30th April 1659. The family then were shown as residing at MIDDOP. There are two sites which may fill this location, Middop Hall, about 1/2mile S>E> of Howgill, and LITTLE MIDDOP, a farm a further 1/2mile to the east of the hall.

I have no further info regarding children of Rogerus except for Hugoniis.

Rogerus was buried at Gisburn 4th January 1692 an was shown as living at Rimmington.

As the three different locations where Rogerus is shown as having lived are within about a one mile radius of each other it is perhaps doubtful if he ever moved at all during his lifetime.

No info regarding the marriage of Hugoniis has been found but three children have been traced.

At the time Hugoniis was living at CHAMPION FARM, this is located about 5 miles to the WEST of Gisburn. Slaidburn being some two miles further West.

As Hugoniis buried a wife, ISABELL, on 31st December 1688, it is apparent that he also was twice married.

Ambrosius, of GREENWOODS, a farm less than 1/2miles south of Champion farm, `married MARGARET FELL of BOLTON by BOWLAND, 1st May 1735.

Only one child has been traced, HUGH born 1736, he married ISABELL HALL of Slaidburn 30th October 1760. His mother was buried at Slaidburn 22nd April 1771, quickly followed by his father 7th June the same year. The marriage details of Ambrosius and Isabell show that whilst Isabell was unable to sing her name, she made her mark by means of a ‘X’. Ambrosius was able to write and sign his name. This is typical of all the Grimshaws throughout records, even for the female members, whereas very few other men at the earlier stages were able to write their names.

HUGH and ISABELL had ten children:-

MARY baptised 21st January 1764 she was buried 11th February 1824 and had two children, the first HENRY was spurious(illegitimate) the second ISABELLA baptised17th October 1819 may also have been

AMBROSE and HENRY baptised 28th February 1769. Henry was buried 3rd March and Ambrose 15th March both in the year.

AMBROSE and ANN had three children

HUGH born in 1803 baptised at HORTON by GISBURN 9th June 1812. HUGH married BETTY ODDIE of MIDDOP 7th February 1828 at ST BARTHOLAMEWS, COLNE. At the time the family had moved to HIGHERFORD.

WILLIAM of whom I have no further details.

HUGH and BETTY had eleven children all of whom were baptised at St Bartholomew’s.

AMBROSE baptised 5th December 1829, I believe that he had one son HARRY but have no further details.

REBECCA born in March 1841 married to ? HARTLEY and had at least two children GLADYS and JACK ROY. no further details.

JEMIMAH born 1848 married to M. HOLT two children one who’s name I have not discovered the second named NEWMAN.

JOSEPH was my great-grandfather he and Alice had five children.

THOMAS HARRY born 1880 killed in action 20th September at the battle of Pachendale whilst serving with the Welsh Guards. He was married to EFFIE (?) and had four children HARRY born 1901, NELLIE and AMY the fourth I do not know.

FREDERIC and CLARA had five children.

LILLY unmarried died at the age of 96.

ARTHUR and JOSEPHINE had four children. They are not listed because several are still living.

Derrick Grimshaw has provided three photos of places that are significant to the Gisburn Grimshaw family line. These are provided in Figures 3, 4 and 5 along with descriptive annotations provided by Derrick in the e-mails with the photos.

Figure 3. Champion Farm, which was occupied by Grimshaws of the Gisburn Line. Derrick Grimshaw’s descriptive annotation (slightly modified by the webpage author) appears just below the photo. 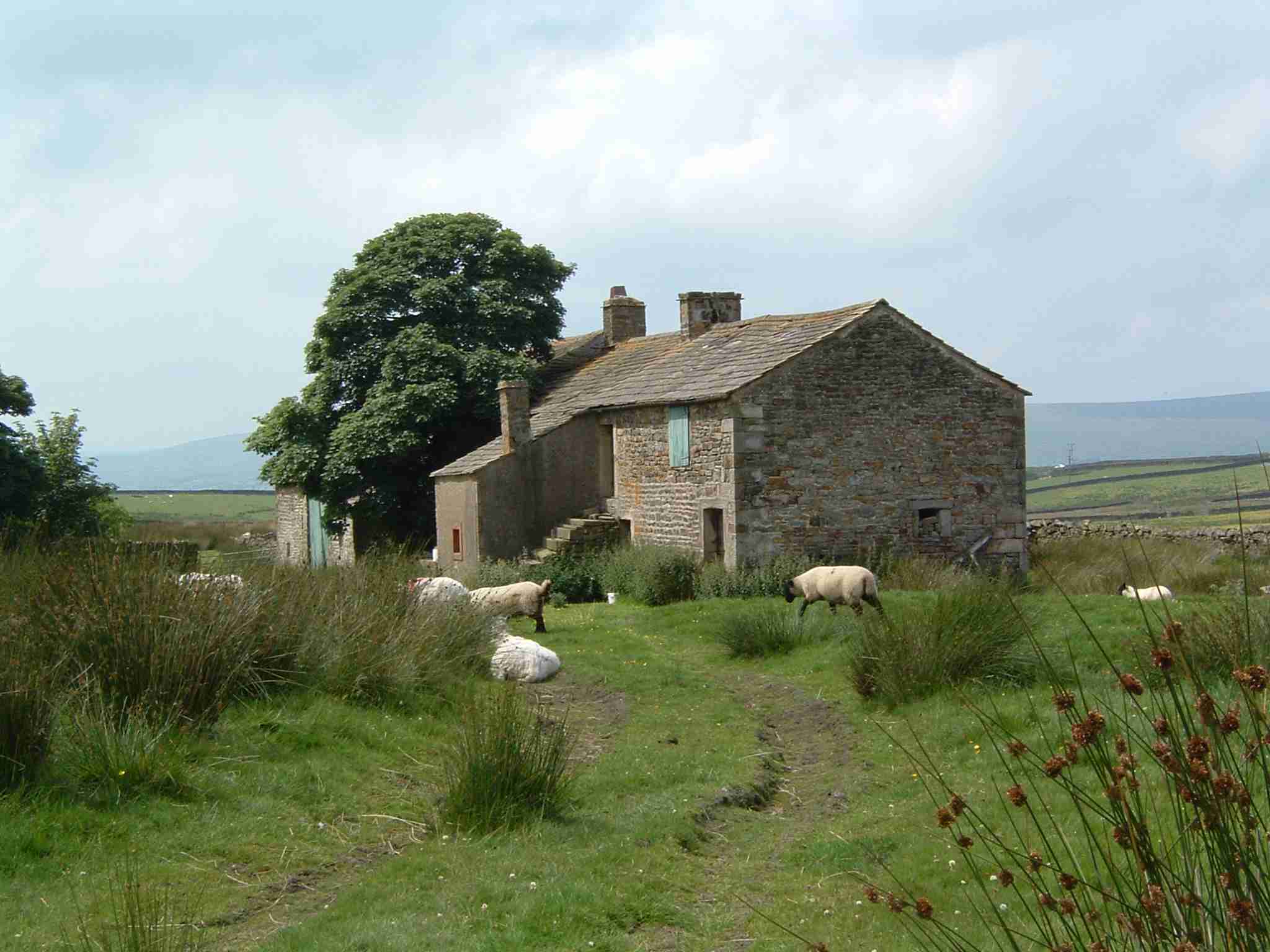 This is the farm known locally as ‘Grimshaw’s Champion’ at least three generations of the family farmed there. The earliest dates from February 25, 1683 when a daughter of Hugonis Grimshaw was baptised at St Andrew’s, Slaidburn. One of his sons, Ambrose, also a forebearer of mine, farmed at “Greenwoods” which is a farm about half a mile from Champion. Ambroses’ son also known as Hugh farmed Champion until the time of his death, March 15, 1769.

As you will see the building is now derelict; whilst there I spoke to the son of the farmer now farming the land, he told me that it was last occupied in 1956. Where the tree now grows is the only door into the building which consists of only four large rooms plus a small kitchen.

There are no amenities to the place whatsoever, although at some later stage a cast iron cooking range has been inserted into what I take to be the living room. Before that there was a stone slab in the kitchen under which a fire was lit, from outside the house, and this was used for cooking purposes. The stone steps up the side of the extension now hide the opening where fuel as put under the slab.

The farm is very isolated there closest lane being about a mile away, there is no reasonable track, only a tractor or four-wheel drive could get to it. It took me a good half hour to get from the car to the building, unfortunately I chose the hard way across the moor, during which I fell six times and finished up rather muddy. I found an easier route back which only took me about half the time. 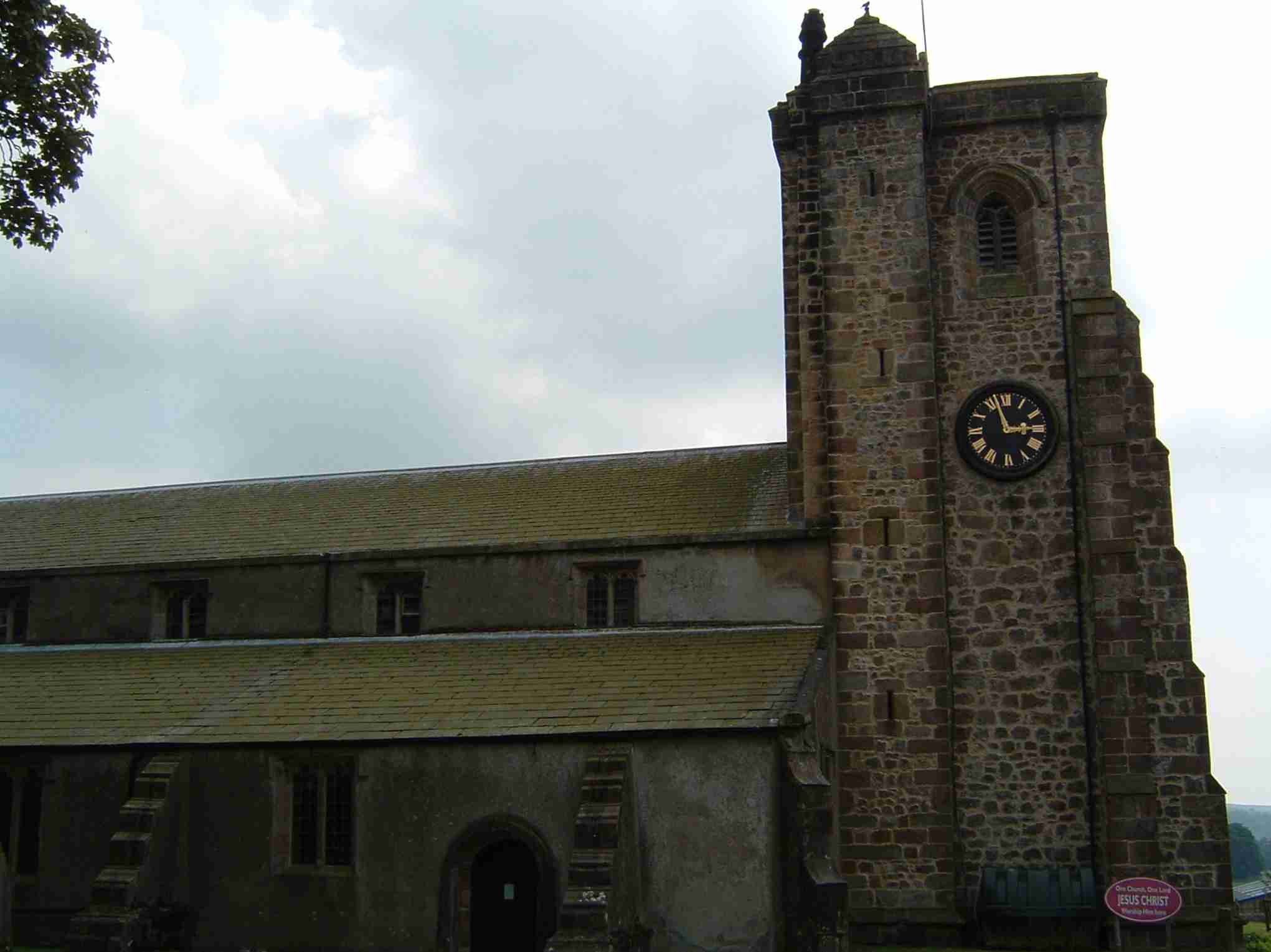 Following on from my trip to Gisburn, here is a picture of St. Andrew’s church, Slaidburn. The Grimshaws worshipped here from the late 18th century. The earliest record is the burial of Margaret, wife of Ambrosius, April 22, 1771. Ambrosius, son of Hughgonis was buried 7th June the same year. Ten Grimshaws were baptised here, four of whom I have not associated wife my family. Six were married here, only two of my family. Nine were buried, one not of my family. 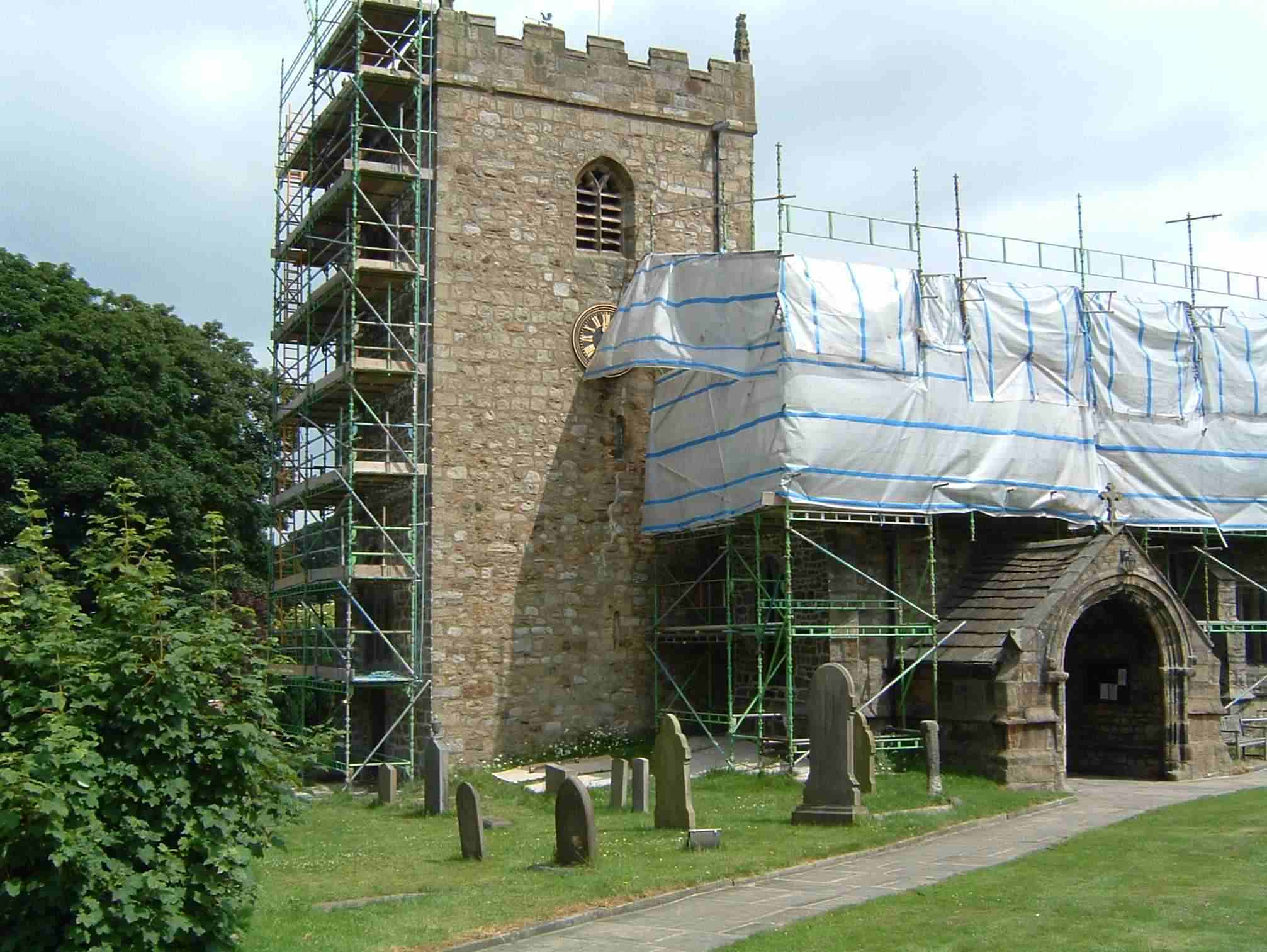 Is the Ottwell Grimshaw Line Descended from the Pendle Forest Line?

Derrick Grimshaw suspects that Ottwell is descended from the Pendle Forest line of Grimshaws but has not yet established proof of this connection. The close proximity of Gisburn to Pendle Hill and Pendle Forest would lead one to suspect a connection of the Gisburn line to the earlier Pendle forest line. Derrick has sent the following information (slightly modified by website author) about this conjecture:

As regards your query if there is any connection between my Grimshaws and the Pendle Forest family, I have a distinct feeling that there is. It seems remarkable that (one of) the P. F. family, Thomas, who came to live at Crowtrees, Barrowford about 1800 should be so quickly followed by my family within less than five years. Thomas was responsible for, firstly, adding to Crowtrees and the embarking on a building project to make two factories, a malthouse and brewery together with a corn mill. My family at that time were shown as being stone masons and builders. There was a quarry, long disused within a few hundred yards of all the building work. I feel that my lot were sent for to at least help with the building work. Up to now no association has been made.

Eunice Paul, working on behalf of Thomas Grimshaw, has conducted additional research on the Gisburn family line, going back to Hugh Grimshaw and Elizabeth Oddie, and has provided the descendant chart in Figure 6. It contains much of the information shown above, but with additional detail.