Note: This webpage supercedes the webpage on John and Jane Grimshaw (click here).

Nicholas Grimshaw was born in approximately 1700 and was the progenitor of a substantial line of Grimshaws located at and around Wiswell, which is on the west side of Pendle Hill, north of Blackburn and south of Clitheroe. Although Nicholas is believed to be a descendant of the Pendle Forest line of Grimshaws (click here for webpage), the connection has not yet been established. Nicholas had children Agnes, Grace, George, Nicholas, William, John Grimshaw; his spouse has not yet been identified.

The descendants of Nicholas’ son, John Grimshaw (married Jane Waterhouse), have been well researched by two of these descendants, Dorinda Boag and Merilyn Tarplee.  They would appreciate hearing from any researcher having information on this family line. They may be reached at their email addresses as follows:

Where Is Wiswell in Lancashire?

Where is Claughton in Lancashire?

Significant Photos for John and Jane Grimshaw and Their Descendants

Thanks go to Dorinda Boag and Merilyn Tarplee for providing most of the information on this webpage.

Where Is Wiswell in Lancashire?

The map below shows Wiswell (red “A” indicator) in relation to nearby landmarks in Lancashire, including Blackburn to the southwest, Whalley, and Sabden, which is on the top of Pendle Hill. 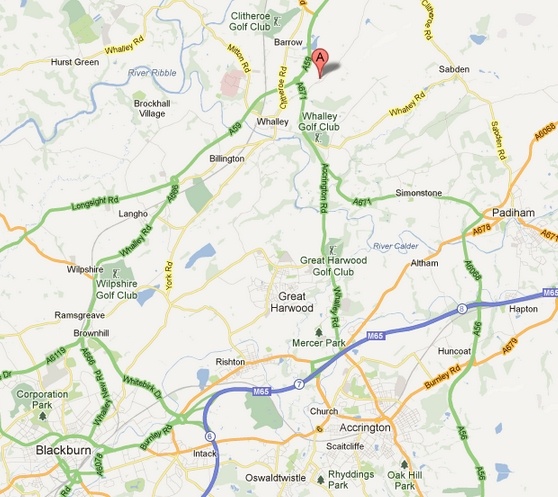 The following map shows a closer view of Wiswell with its close proximity to Sabden on Pendle Hill. 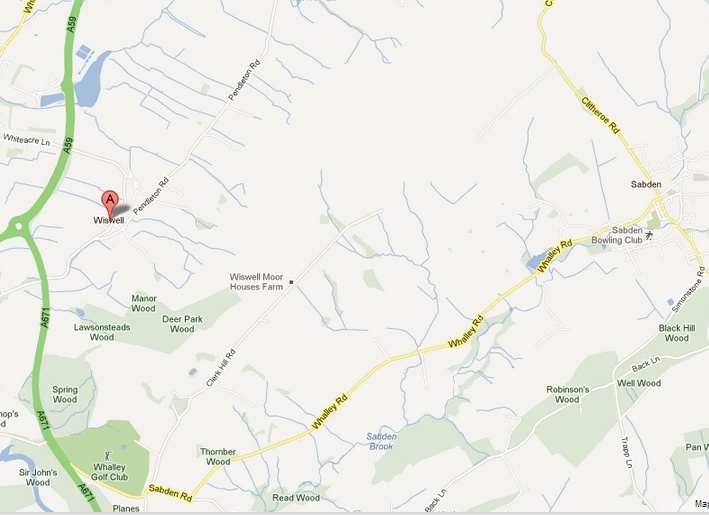 Research on Nicholas Grimshaw’s family line began for this website when Dorinda Boag sent an e-mail in January 2007 with information on John and Jane Grimshaw’s family and descendants. Her e-mail is shown below.

I think I contacted you a few yrs ago to ask about the Grimshaw name in general and to try to find out if I could link my line in with any you knew of. Since then I have found a little more information out about my roots and I enclose some documents as to my direct Grimshaw line. Can you tell me if you would be able to include this on your site and hopefully someone may be able to link in with it or even to take it further back.

Please let me know if this will be possible, you have a great website for the Grimshaw families.

John and Jane Grimshaw’s Family and Descendants from Dorinda Boag

The line of Grimshaws provided by Dorinda Boag is summarized as follows:

Where is Claughton in Lancashire?

John Grimshaw is indicated as a “Yeoman of Higher House Claughton”. This location is north of Preston in Lancashire, near the M6 and the Calder River. This family had evidently moved some distance from John Grimshaw’s origins in Wiswell. The following map shows the location of Claughton (red “A” marker) in relation to Blackburn and Whalley, which are shown near Wiswell in the maps above. 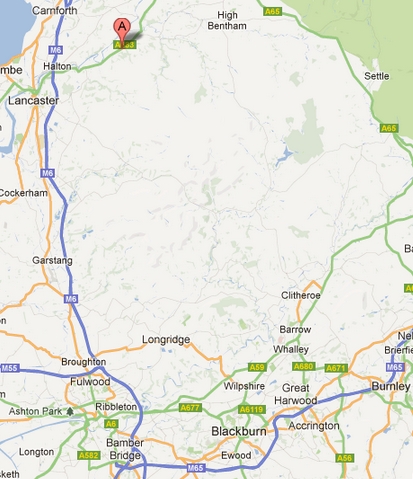 The location of Calughton Hall is shown in the map below.

A website indicates that there is a stable at Claughton House. 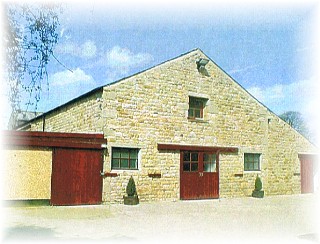 Significant Photos for John and Jane Grimshaw and Their Descendants

Dorinda Boag has provided two photos of locations that are significant to the John and Jame Grimshaw line. The photo below is of Higher House, Claughton, Lancashire, where John and Jane Grimshaw lived and apparently had their family. 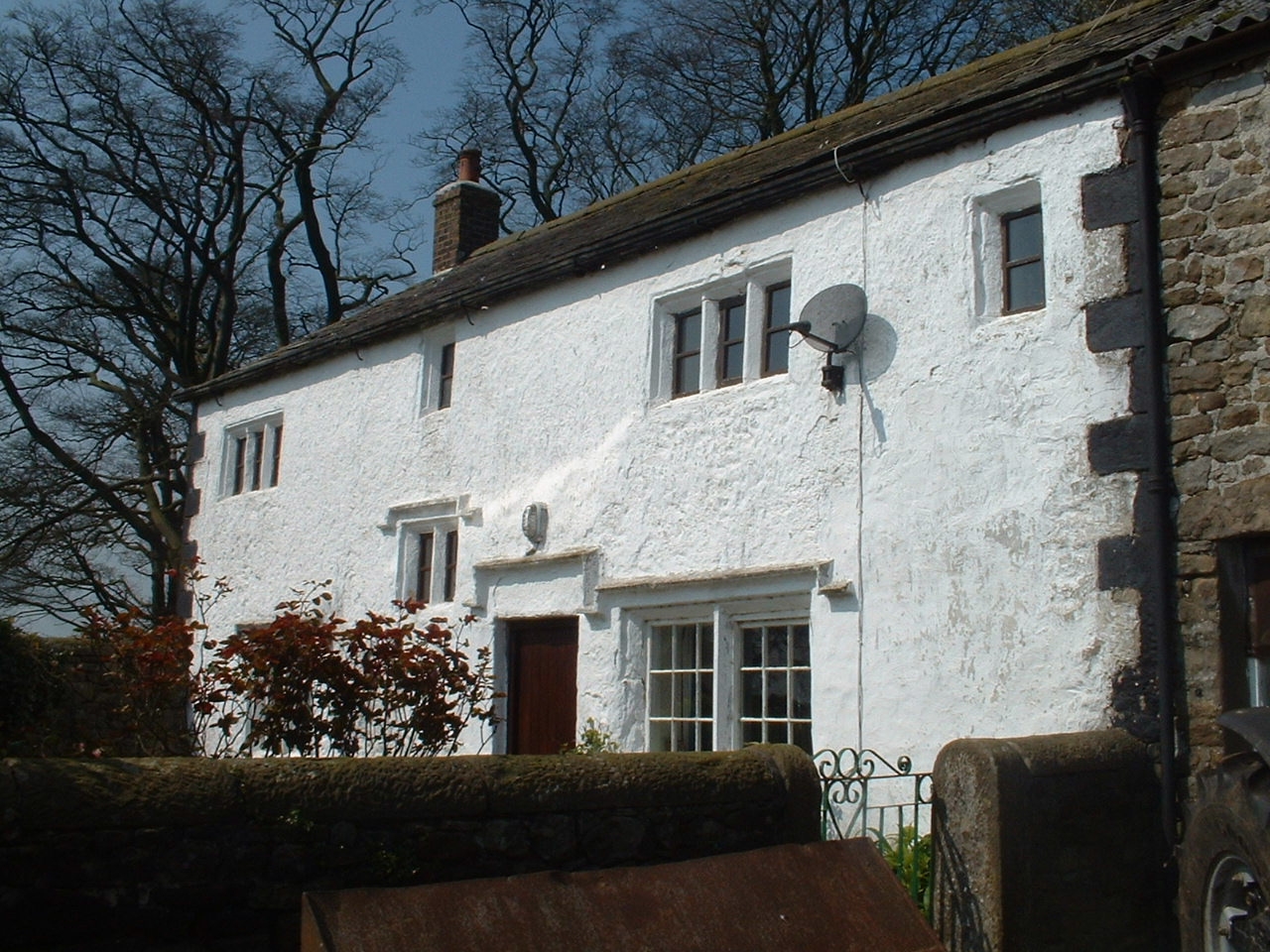 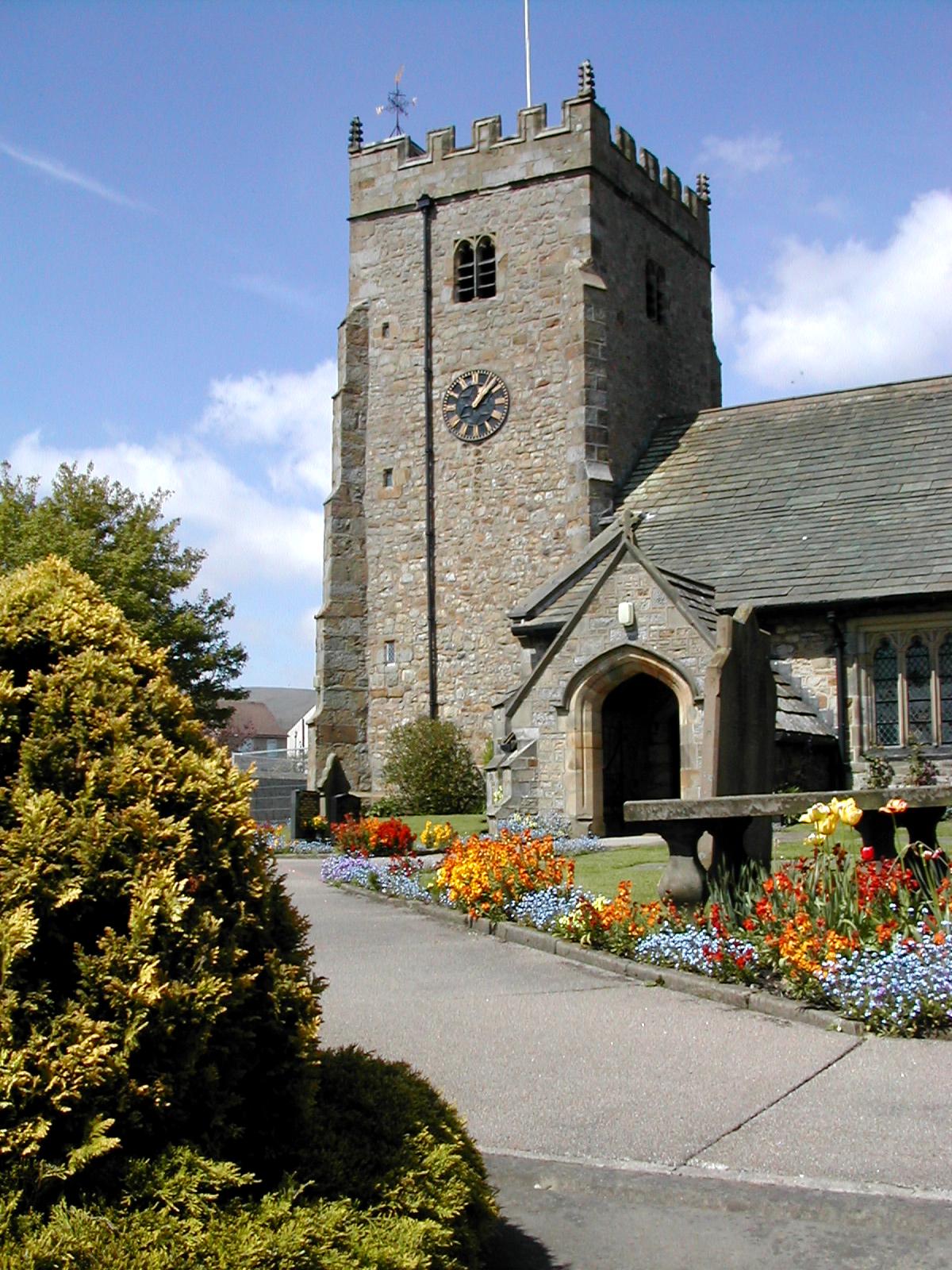 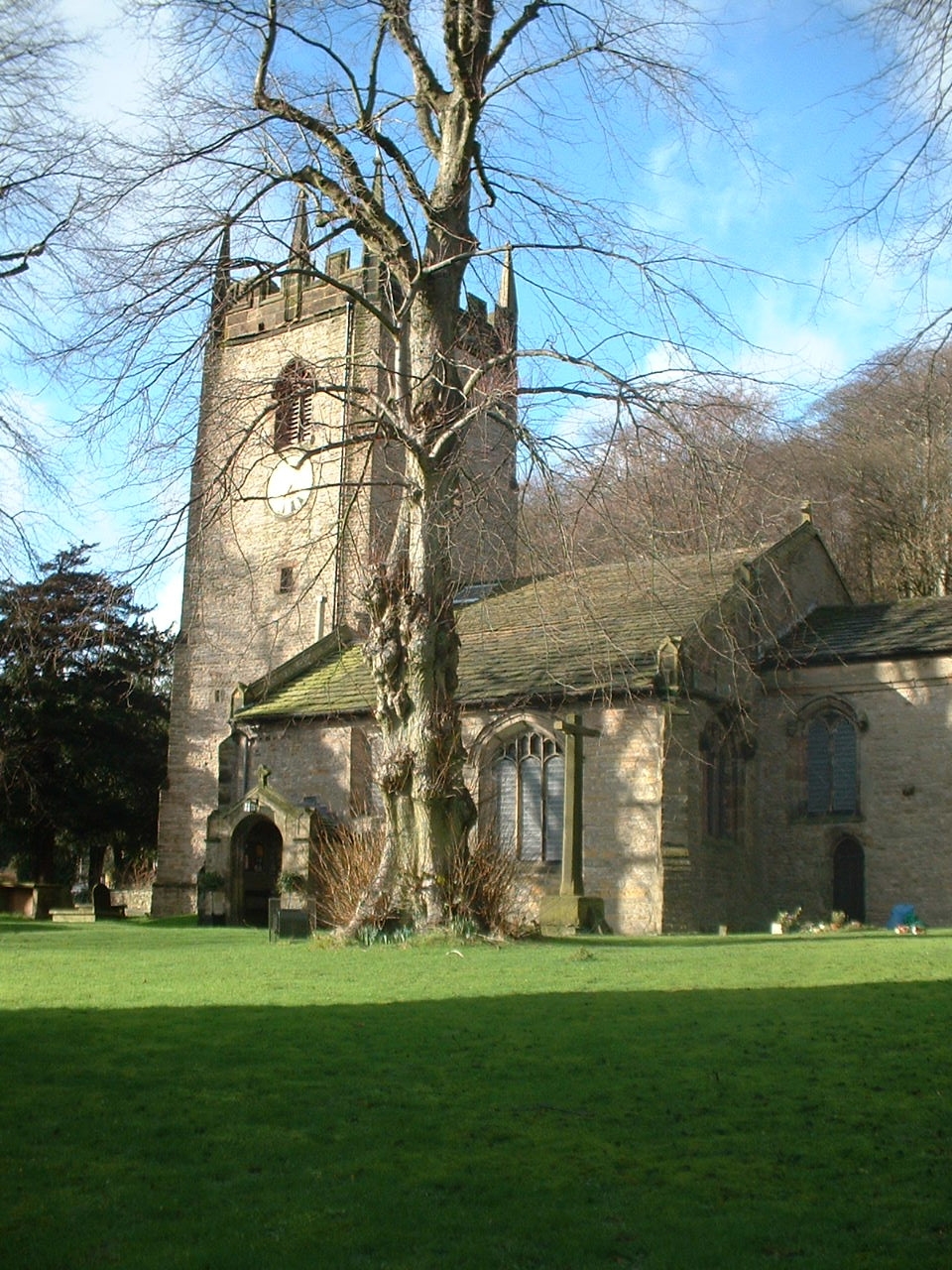 Nicholas Grimshaw’s descendant chart was significantly expanded with information provided by Merilyn in an email received on March 11, 2013. The email is shown below.

A couple of years ago I was contacted through Ancestry.co.uk by Dorinda Boag, as she noticed that I was researching the same family line as hers. My Tree is on the Ancestry Web Site.

I was brought up by my mother Ethel Moya Grimshaw, daughter of Nicholas Grimshaw (1868) with the family story that we were related to the Nicholas Grimshaw Mayor of Preston 7 times. (Pendle Forest Line of Grimshaws). In my grandfathers papers was the famous picture of Nicholas which was passed down to me. When I talked to Dorinda, she was also brought up with this story. This was surprising as our two lines had split almost two hundred years ago, we both being descended from sons of James Grimshaw and Tabitha Howarth. I Have now brought my tree to the present day and I attach it, with some documents to corroborate the descendant chart.

I have put at the head of the tree Nicholas Grimshaw of Wiswell, as I have photocopied the page of the transcribed document at Wigan History Library showing John Grimshaws 1733 christening at Whalley Church. Nicholas also had other children which I have listed, but I cannot find details of his wife or marriage. I have also included now Jane Waterhouse as the wife of his son John Grimshaw (1733), as at

I cannot at this time connect our Nicholas of Wiswell (a hamlet in the Pendle Forest area) with the family tree which you have on line but I notice that there are a couple of male Grimshaws on the Pendle and Clayton Trees for whom no-one has continued the descendants. The researcher whom Dorinda used to do her family line, had the theory that Nicholas of Wiswell was the son of A Nicholas Grimshaw living in Heyhouses in 1696, as the family names of his children continued down to those of John Grimshaw our 5 times Grandfather, but had not given her documentary evidence to corroborate this. John Grimshaw 1733 could read and write as he signed his marriage record to Jane Waterhouse., copy enclosed, so we can presume that his father Nicholas of Wiswell was a gentleman and had the means to educate his children.

Dorinda and I would love to hear from anyone who could perhaps help us in determining the parents of Nicholas Grimshaw of Wiswell so that we can tie him into one of the original family lines, especially as the name Nicholas the family name, has been continually used throughout the generations.

In the meantime perhaps you could include my line now on your website extending Dorindas research. You can also include my email address for anyone to contact me.

Merilyn provided a number of important record images and photographs of family lines, which are shown below. 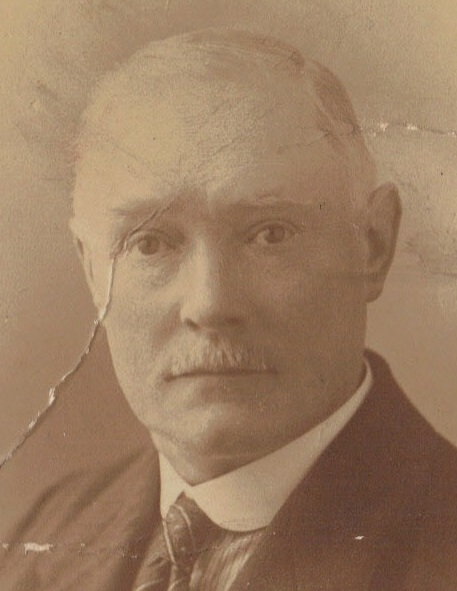 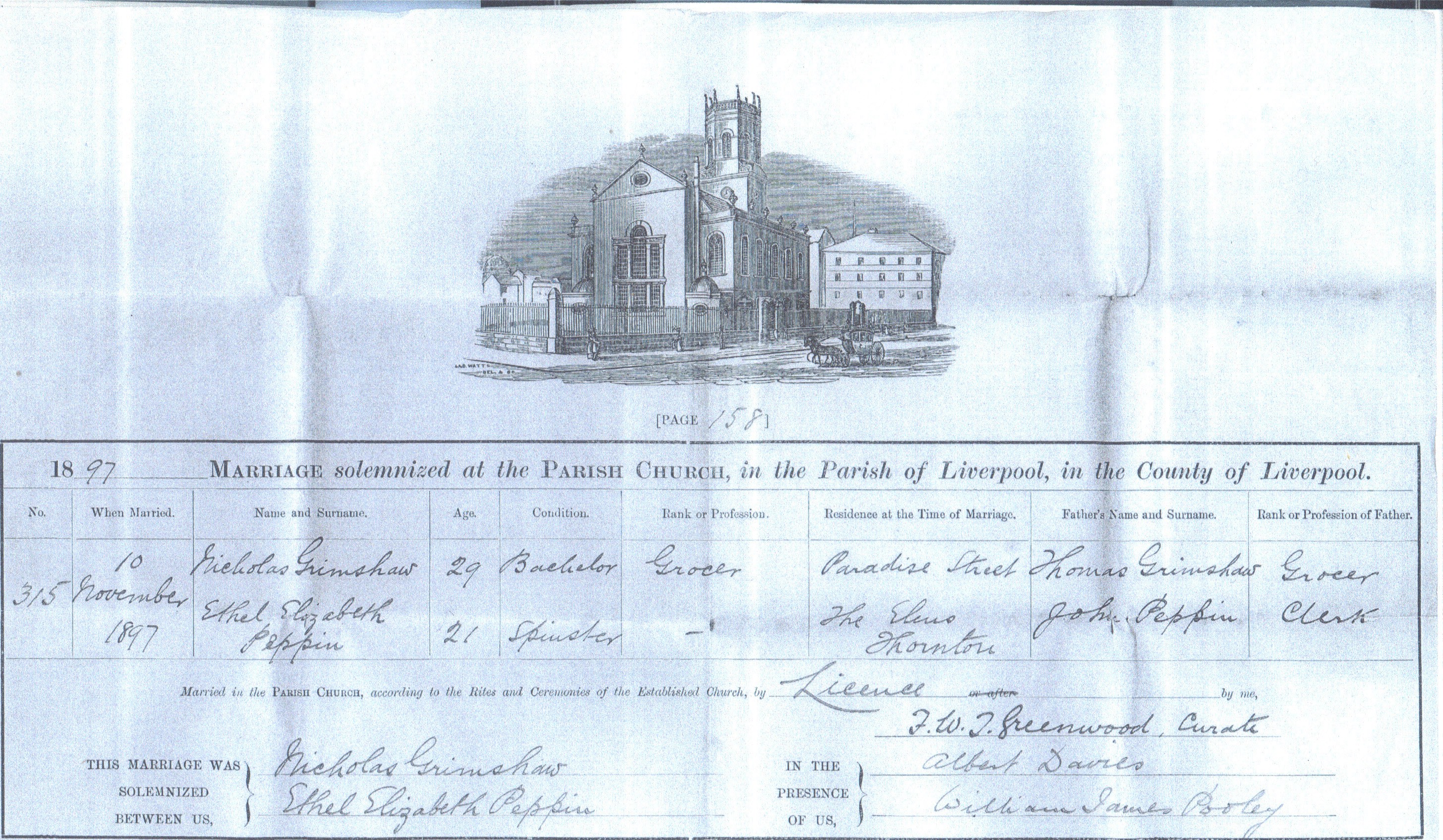 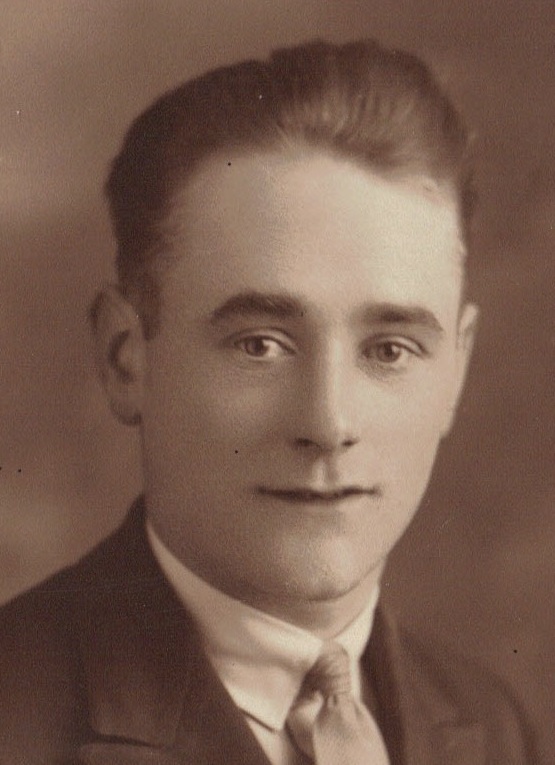 The descendant information from Dorinda Boag and Merilyn Tarplee may be combined into the following integrated descendant chart for Nicholas Grimshaw of Wiswell.