Grimshaws in the Abram Area

Grimshaws in the Abram Area Near Wigan in Lancashire

Grimshaws apparently migrated to the area of Abram and Wigan quite early in the family history. A search of “Wigan” in the Lancashire Parish Project, for example, shows a marriage in 1612 of Jane Grimshaw to James Hill. One of the best known Grimshaw natives of Abram was John Elisha Grimshaw, who was awarded the Victoria Cross for valor at Gallipoli in World War I, as described on a companion webpage.

Mary Sayers has kindly provided information on the Grimshaws of Abram for this webpage. Mary dedicates this webpage to the memory of Peter Grimshaw “perhaps not one who achieved fame, but as an ordinary but thoroughly good and kind man”. The webpage is also dedicated to Mary’s grandfather, Sam Marsden, who kept letters, photographs, parish magazines, and
other items that stimulated her interest in family history. These materials comprise at least a part of Mary’s contribution to this webpage. Mary has expressed willing to respond to inquiries regarding Abram and its history via e-mail; her e-mail address is mary.sayers@virgin.net.

Article in “Past Forward”, a Magazine by the Wigan Heritage Service

Where is Abram in Lancashire?

Thanks go to Mary Sayers for making the information on this webpage available.

Article in “Past Forward”, a Magazine1 by the Wigan Heritage Service

Mary Sayers has authored the following article on Abram in the early part of the 20th Century. Mary notes that Peter Grimshaw in the second photo is the upper right, not the upper left gentleman as indicated in the caption. 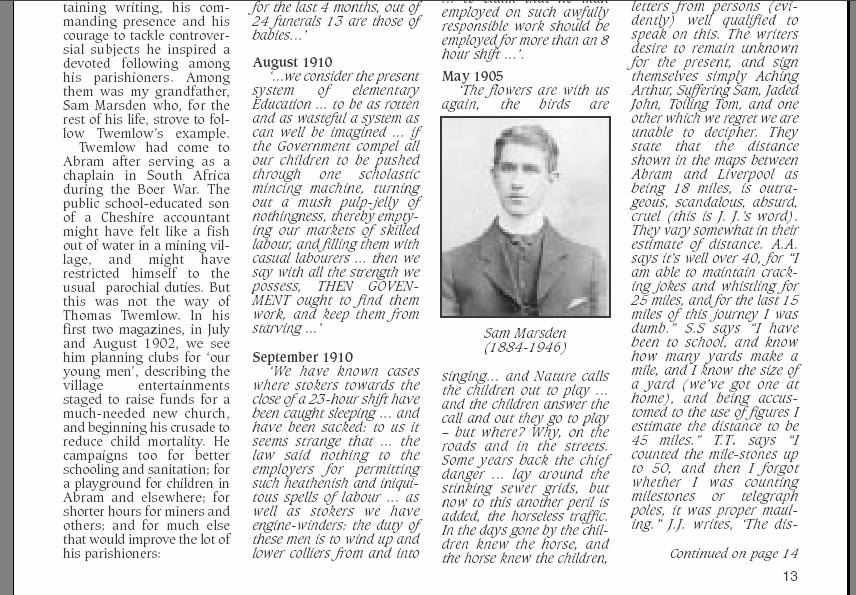 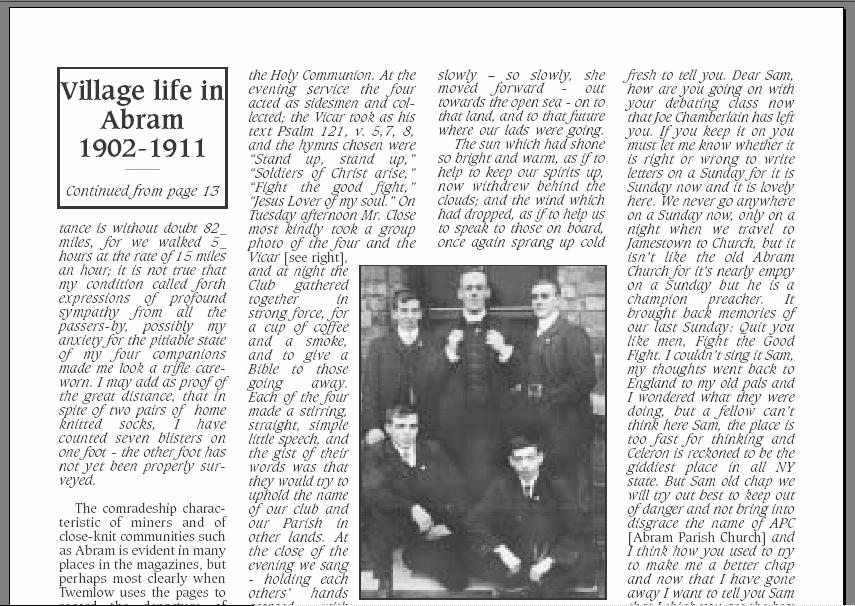 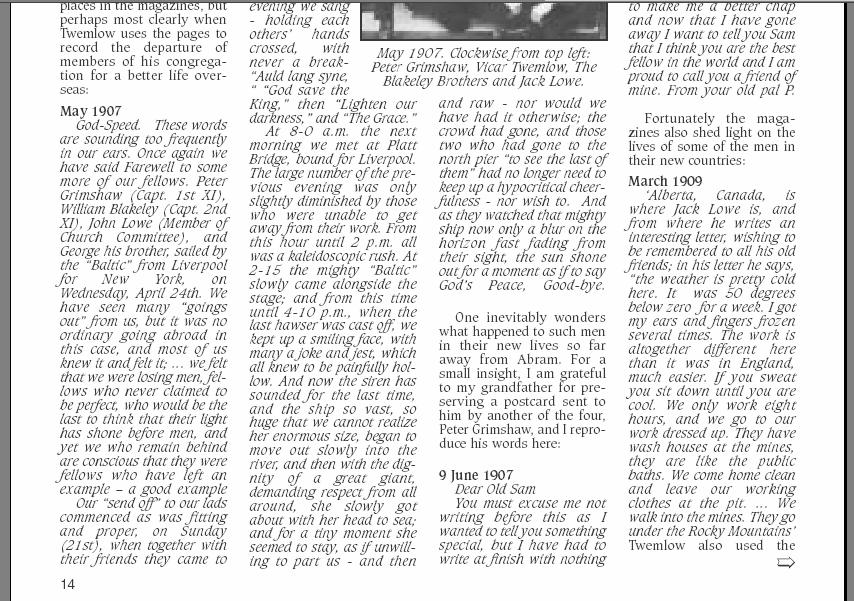 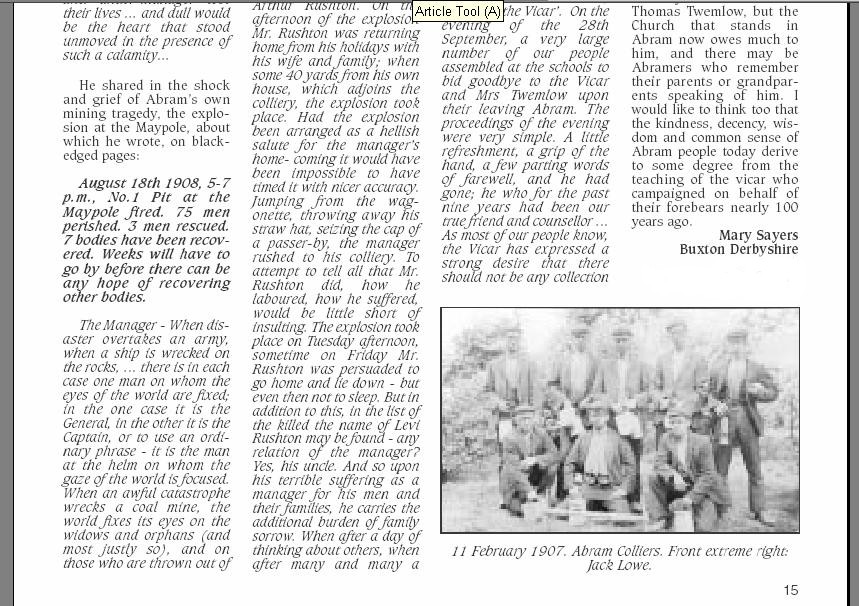 Mary Sayers has provided a number of photos with Peter Grimshaw in them; they are provided below with brief explanations. 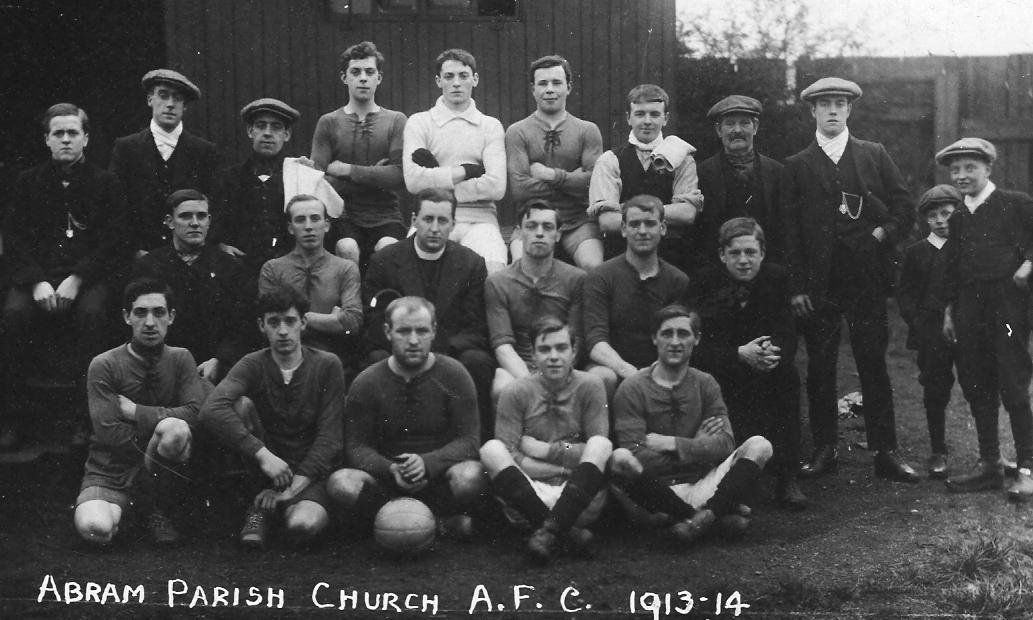 Abram young men (extract from the Parish magazine of the time):

“Whispers about a proposed match with Beeston Hill Football Club had been going on for some time when it was finally arranged to journey to Leeds on Easter Monday, April 13th for the purpose of showing the Vicars [TF Brownbill Twemlows] old club “how to play”. The party numbered 27 in all – a very good muster – considering that at the time of starting the ground was covered in snow, and the cold severe. Wagonettes conveyed our party to Wigan in time to catch the 7.15 excursion train to Leeds. We had a saloon carriage all to ourselves, and the journey was a very lively one. Reaching Leeds at 10.15 we were ready for a good breakfast, and that necessary repast disposed of, we made a tour of the town and an inspection of the ground, which presented a striking contrast to our muddy field. Play commenced at 2.30 and a good stiff game of 40 minutes each way ended in a draw, both sides scoring two goals. A substantial tea was very kindly provided for us, and after the two teams had been photographed we returned to the town where we had another hour and a half to spare. A start for home was made at 7.30, Wigan being reached three hours later” 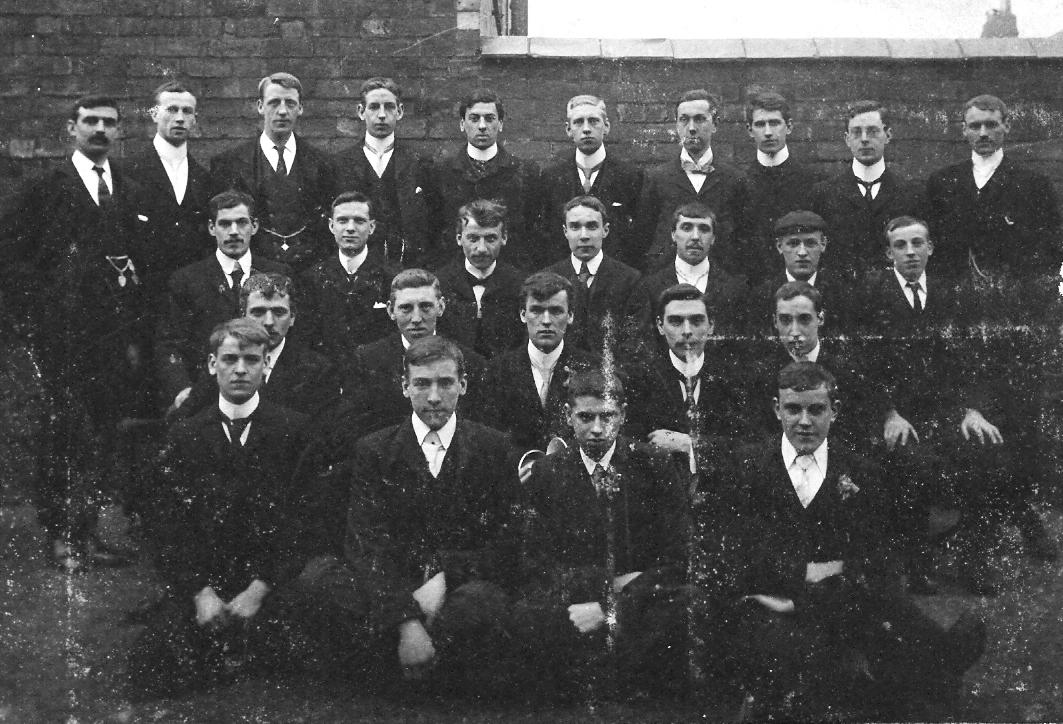 Pierrots, c 1906. Peter Grimshaw is at far left. Mary thinks this may have been an entertainment staged as part of a group holiday/training week for the Abram young men who were in the rifle volunteers. 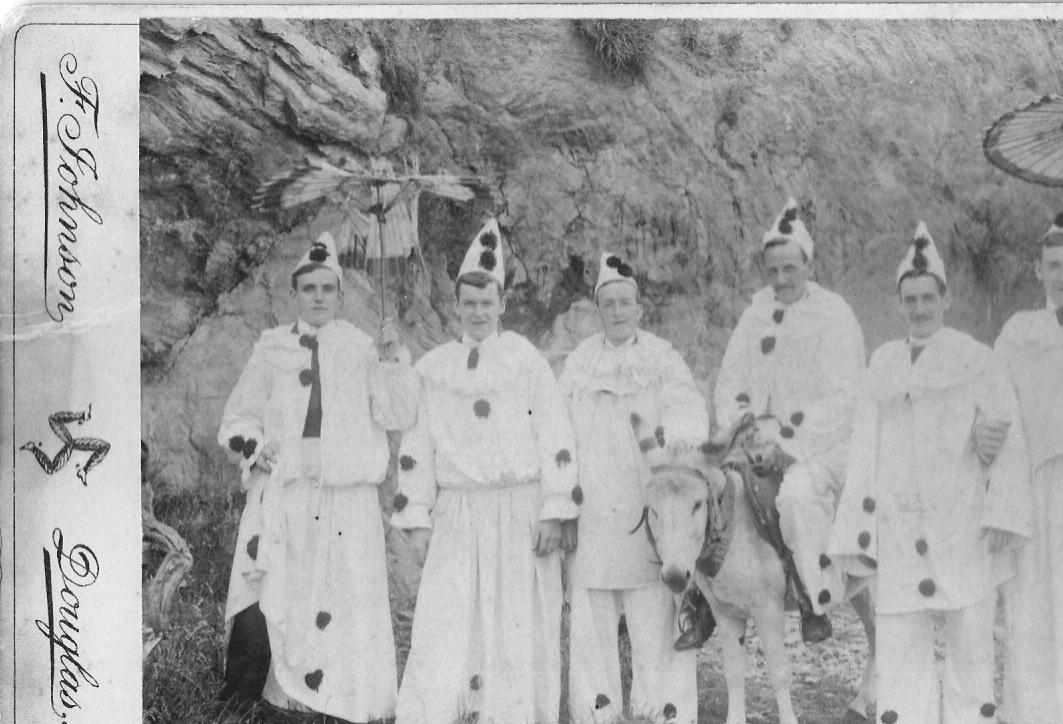 Peter Grimshaw emigrated to America in 1907 but returned to Abram the following year. He had been a carpenter at a local colliery, according to Mary Sayers, but became the publican at The Bucks Head in Abram. During his brief stay in America, Peter sent a postcard to Mary’s grandfather, Samuel Marsden, which is transcribed in the article above. Shown below is a photo of Peter (lower left) and three other young men who apparently emigrated to America with him. The four are shown with their vicar. Mary Sayers provides the following explanatory text for the photo. 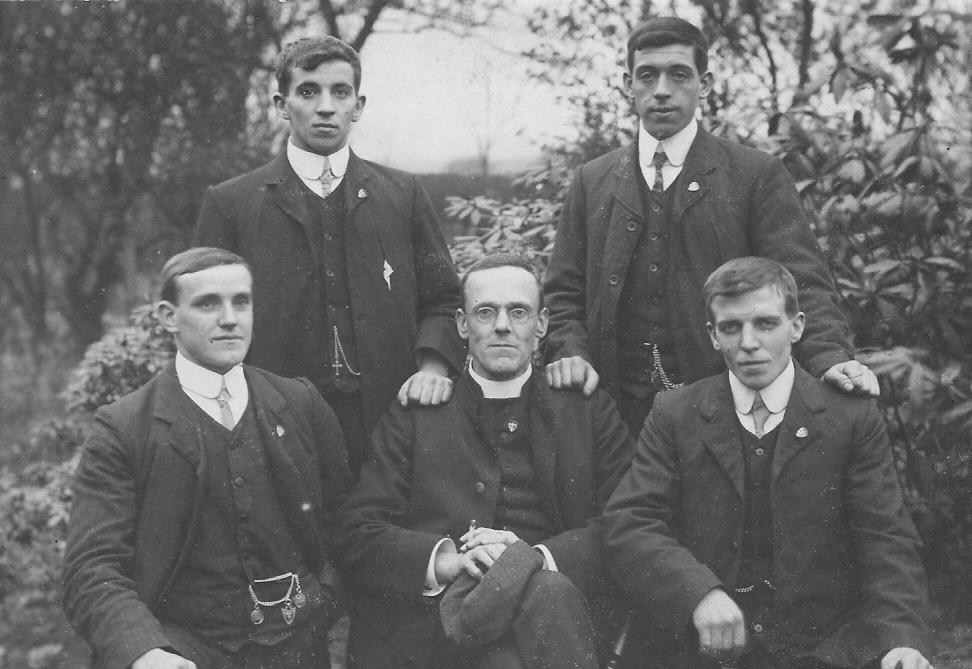 Mary has provided the photo and associated description below of a probable younger brother of Peter Grimshaw, who is described above on this webpage.

Ive just found this photograph and wonder if its of interest. My grandfather has written on the back, “Bobby Grimshaw May 9 1908”. Ive had a look on Ancestry and find an entry at 419 Warrington Road, Abram, the home of John Grimshaw and his wife and family who include Peter (of whom Ive sent photographs already) and six other children, the youngest of whom (age 6) is a Robert. He seems the most likely candidate. 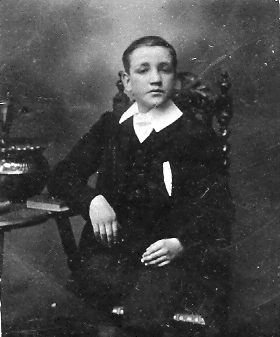 Grimshaws were apparently active in the Parish Church, as indicated by the back cover of the following image from the Abram Parish Church magazine in 1911. The following participants are noted. 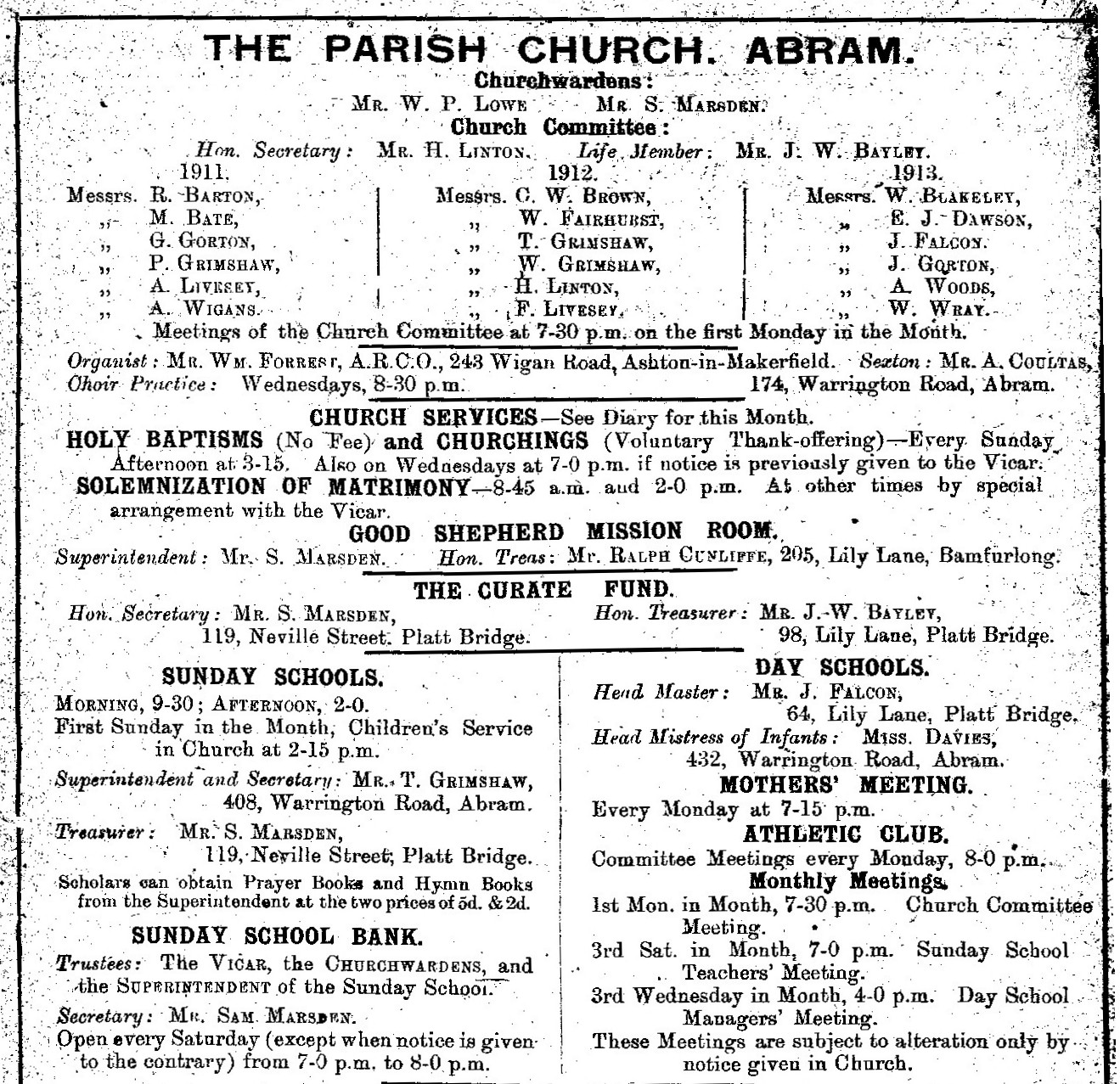 At Rest. In Loving Memory of ANN the beloved wife of JOHN GRIMSHAW who died December 3rd 1913 aged 65 yrs “Gone but not forgotten”

Also MARGARET, grand daughter of the above who died December 14th 1919 aged 3 yrs and 9 mths. At Rest.

A photo of St Johns Church and cemetery is shown below. 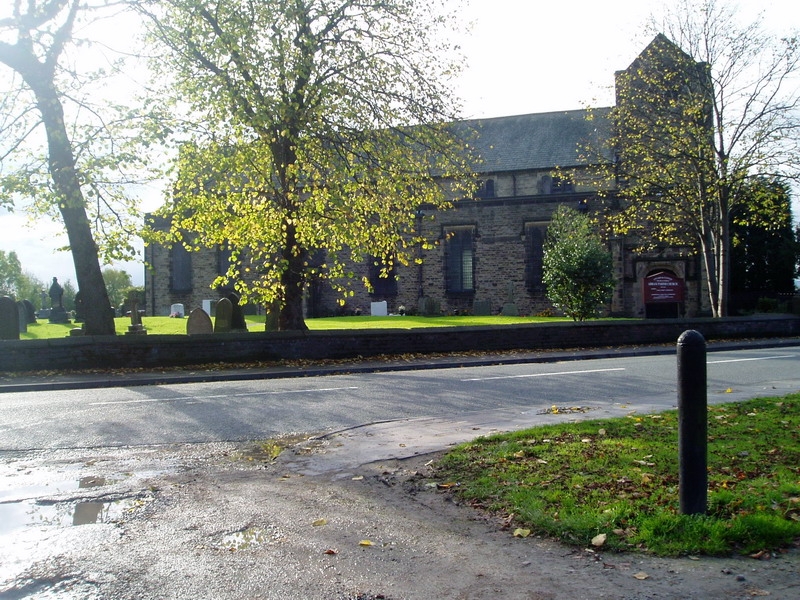 John Elisha Grimshaw fought in World War I and received the Victoria Cross on April 25, 1915 for gallantry in action in the Gallipoli Campaign, as described on a companion webpage. As a member of the Lancashire Fusiliers, he participated in the landings at Helles (W Beach) at Gallipoli and was one of the “Six VCs before Breakfast”. Another Grimshaw, Cecil Thomas Grimshaw, of the Royal Dublin Fusiliers, fought on nearby V Beach at Helles on the same day and was killed in action there on the following day.

John Elisha Grimshaw was descended from one of the lines of Grimshaws at Abram. He was born in 1893 and was employed as a carpenter at Cross & Tetley’s Collieries in the Wigan coalfield when he enlisted in June 1912. He died in London in 1980.

An excerpt from Baines history of Lancaster was found on the internet and is provided below.

“ABRAM – This small agricultural township, the parish originally called Adburgham, and afterwards Abraham, gave name to an ancient family of landowners, of whom Richard de Edburgham, who held four bovates of land, by gift of Henry II, in fee farm, by a rent ofl four shillings, and of those four bovates the third part was given in alms. A descendant, Gilbert de Abram about the reign of Henry IV, had a daughter, Cecily, married to Robert Hindeley, and John Abraham, of Abraham, whose daughter and heir married James Holt, of Grizlehurst, about the reign of Henry V. In the proceedings of an inquisition taken at Wigan, March 28, 1627, before John Bridgman Bishop of Chester, and rector of Wigan, and other “commissioners ad pios usus” it is found that “diverse yeares since Mary Abraham of Abraham in the parish of Wigan did lend unto Miles Gerrard late of Ince Esqr. the some of Fowrescorc Powndes in trust for the use of a free school to be erected in Hindly.” [The school was superseded a few years ago by a new school at Hindley, endowed with £30 a year.] There are in this township several ancient houses: Abram Hall once a moated brick mansion, existing in the time of Henry VI; Bamfurlong, or Bromforlong, a wood, plaster, and brick building, of an age contemporaneous with it, where formerly existed an ancient Catholic chapel, long disused; Bickershaw Hall until late years a moated massive brick house, with approach by a gateway and bridge. In pulling down the gateway some years since three celts, or ancient British war weapons, were discovered. The Episcopal chapel of St. John the Baptist was consecrated June 9, 1838, and in February, 1864,
became a separate parish, under the provisions of Lord Blandfords Act. It consists of a nave, with aisles and chancel, and western turret containing one bell. There is a stained glass window in mcmory of Helen, wife of the Rev. John James Dixon, incumbent, 1839-73. The living is a vicarage, of the yearly value of £170, of which the Rev. Hewett Linton (1878) is the present incumbent; patron, the rector of Wigan.”

Edward Baines, “The History of the County Palatine and Duchy of Lancaster”, published 1891, written c1878.

Where is Abram in Lancashire?

Abram is a located four to five km southeast of Wigan as shown in the following maps. 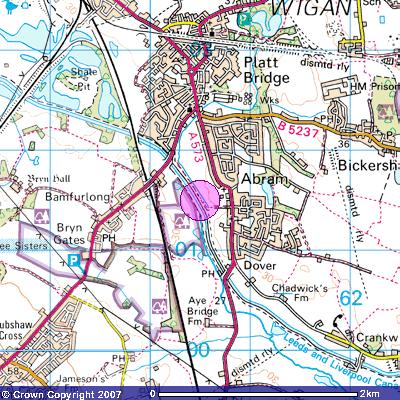 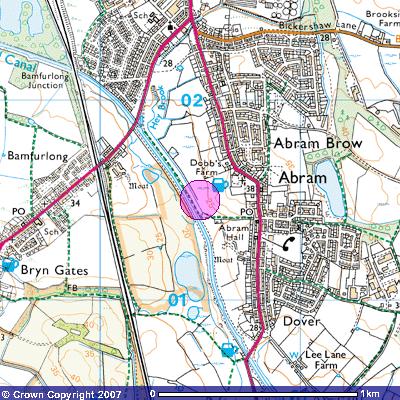 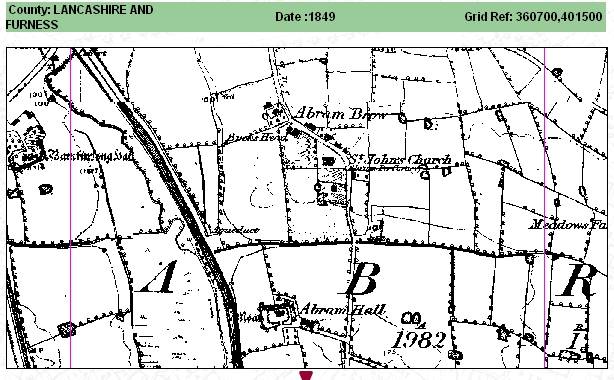