A distinctive “trace” of the Pendle Forest line of Grimshaws is a large gravesite monument at St. Anne’s Church in Fence, a community located east of Pendle Hill (about 11 miles northeast of Blackburn.)

Where is Fence Located?

Thanks go to Gerald Brewin and his son, Derek, for accompanying the author on his initial visit to St. Anne’s church and the Grimshaw monument in May 2000. Also to Leo Wrigley of Haslingden for serving as “tour guide” on that field trip.

A large monument marking the gravesite of 17 Pendle Forest Grimshaw descendants is in the cemetery at St. Anne’s church (see Figure 1 below).

Figure 1. The Grimshaw monument in St. Anne’s Church cemetery is shown below with the author for scale. Note the monumental inscriptions, starting with “SACRED” which can be seen quite clearly. The “Grimshaw griffin” can also be seen above the inscriptions and the wreath (see Figure 2 below.) 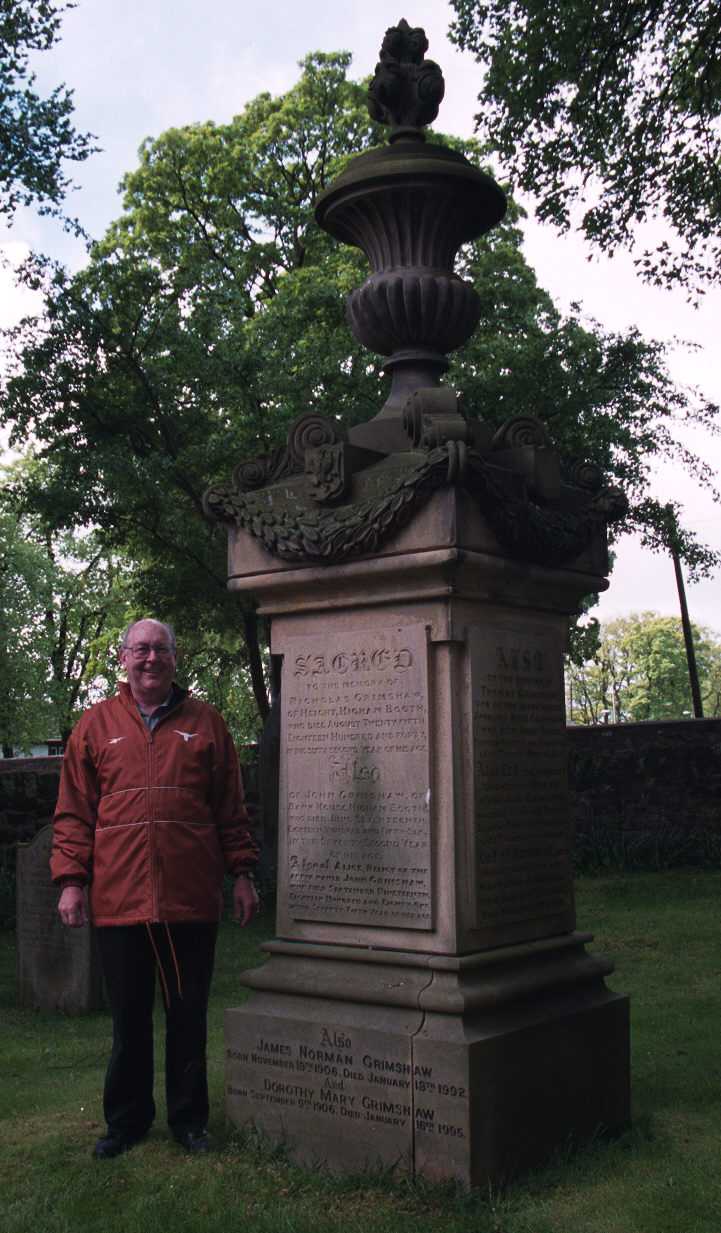 The Grimshaw Griffin — that is, the rendition for the Pendle Forest Grimshaw line — is included on the monument above the inscriptions on one side (see Figure 2 below). The griffin is depicted in bas relief above the inscriptions on the side facing the church. The ducally crowned rendition of the griffin is also shown on the Pendle Forest descendant chart, as presented in Whitaker1.

Figure 2. Closeup view of the Grimshaw Griffin on the monument. Note that the griffin is the same as on the Pendle Forest Grimshaw descendant chart (i.e., ducally crowned.) 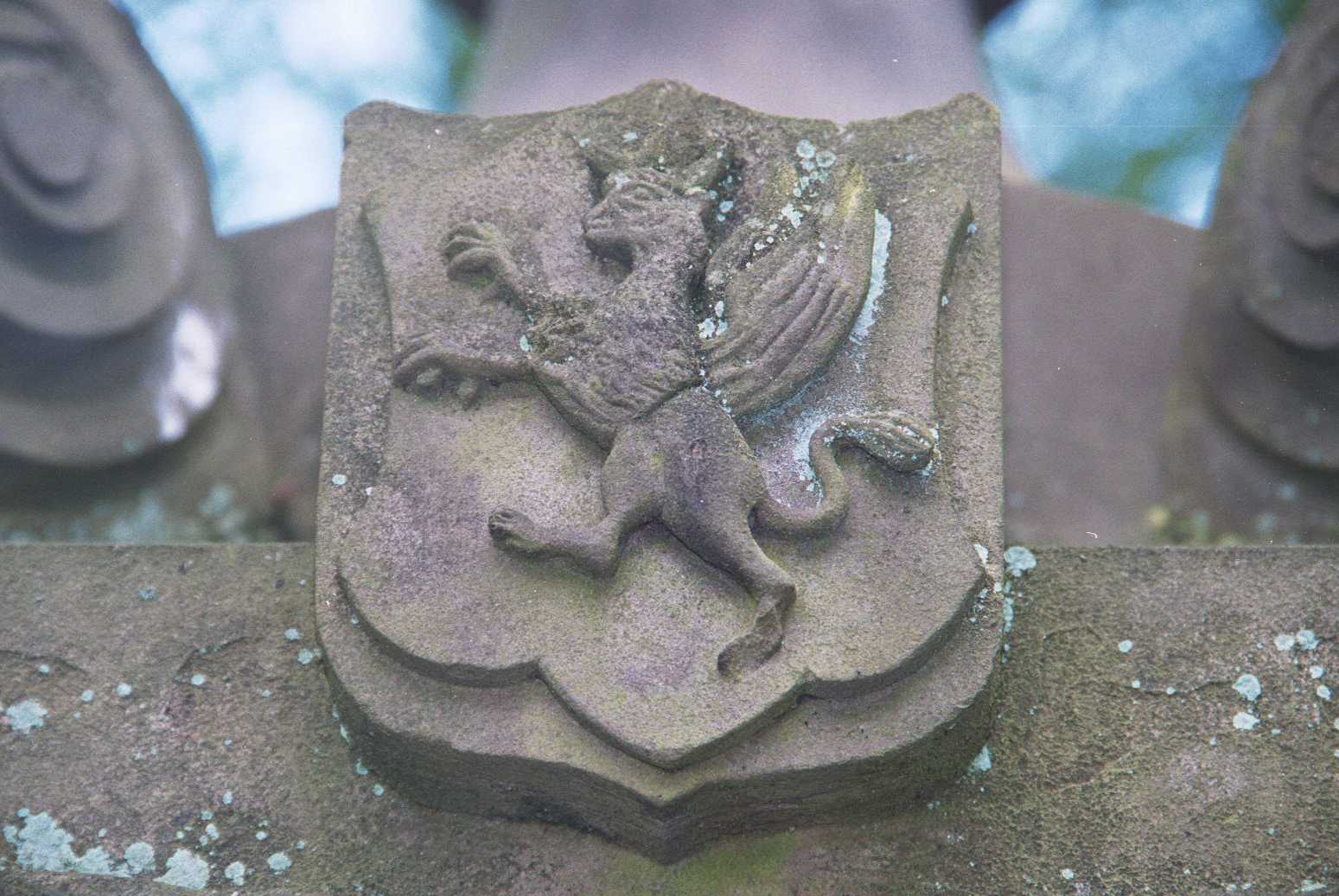 St. Anne’s Church in Fence is almost completely surrounded by the church cemetery (see Figure 3 below).

Figure 3. West side of St. Anne’s Church. The Grimshaw monument is directly around the other side of the church (to the right) in this view. 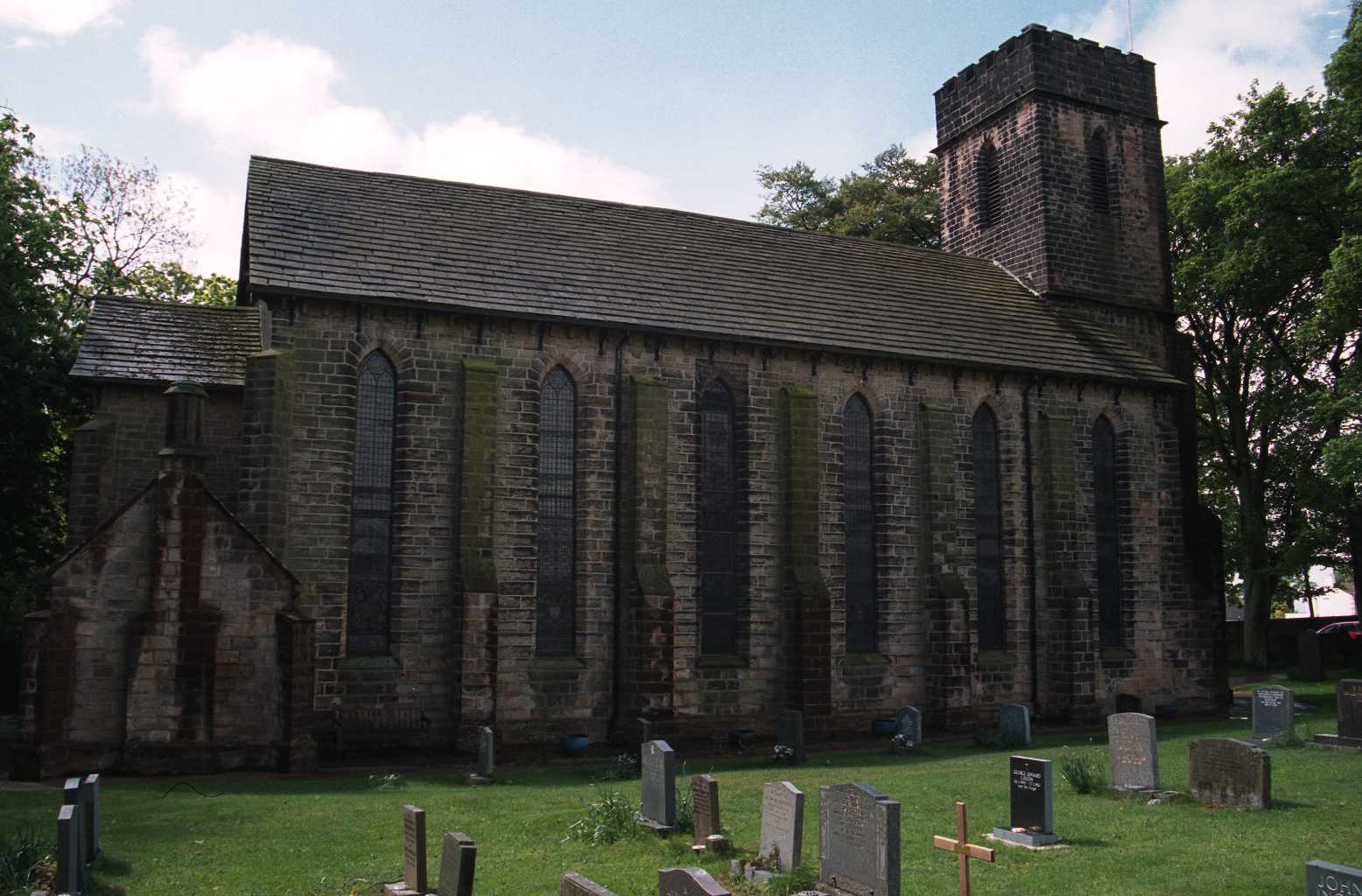 Monumental. A close-up of the griffin is also presented at the bottom of this webpage below the first photo.

All of the interred persons are descendants (and their spouses) of Nicholas and Elizabeth (Harrison) Grimshaw, starting with their children Nicholas (b. 1779), John (b. 1784) and John’s wife, Alice (Dugdale) Grimshaw.

(Side One, with Griffin above)

The full descendant chart for the Pendle Forest Grimshaw line from Whitaker1 is shown on a companion webpage. A portion of the chart (the lower right corner) is replicated from the full chart in Figure 4 below. Thirteen of the 17 individuals in the monumental inscriptions have been identified on the abbreviated chart and are indicated with circled numbers. These numbers correspond to the numbers in braces in the monumental inscriptions listed above.