Sabden, Past & Present, a Photographic History

Sabden, Past & Present, a Photographic History” by Audrey Barrett and David Eaves

The book1, “Sabden, Past & Present, a Photographic History”, is authored by Audrey Barrett and David Eaves and is available from the publisher at: Landy Publishing, “Acorns”, 3 Staining Rise, Staining, Blackpool, FY3 0BU, UK. The price is £10.00 sterling, postage free on the UK mainland. Overseas customers should add an additional £3.00 to cover postage. Another rendition of excerpts from “Sabden, Past & Present” appears on a companion webpage , where the emphasis is on Nicholas Grimshaw, who was responsible for many of the buildings constructed in Sabden.

Thanks go to Audrey Barrett for making this webpage possible by granting consent and providing images and text to go with them.

Cover of “Sabden, Past & Present” 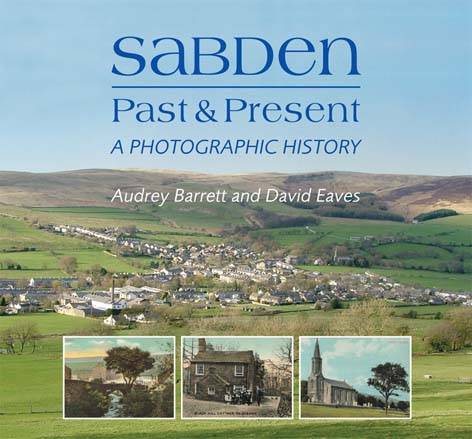 Photos and Descriptions from Audrey Barrett

Crow Trees Row along with Step Row and Top Row were three terraces built by Nicholas Grimshaw of Higham, previously of Heyhouses, during the last decade of the 18th Century, when any sort of housing in the newly formed village was at a premium. The original name of Crowtrees Row could have had some connection with nesting crows though, coincidentally, another branch of the Grimshaw family inhabited a house in the Barrowford area also called “Crowtrees”. At some point, probably in the early years of the 20th Century when the Grimshaw houses were sold off, the name was altered to Grimshaw Terrace in memory of Nicholas Grimshaw. Another change of name was proposed in 1984 to Badger Wells Cottages but not without objection. Perhaps the objectors knew something the rest didn’t, for the stream running down the side of the row is not Badger Well Water but Churn Clough. To top it all the “badger” of the said “well” is not all he appears to be. The word “badger” is more likely to have meant “an itinerant trader, tinker or vagrant”, who would have stopped off to refresh himself and his transport centuries ago whilst travelling on the old pack horse route from the Wellsprings over to Heyhouses and beyond. Such a theory runs contrary to the cute, black and white striped, nocturnal creature one would immediately think of.

At one time there used to be 31 houses on Top Row and a pub called the Weavers’ Arms but there are no old photographs to prove it. The picture (below) from 2004 shows a selection of the remaining cottages.

Step Row is the terrace of cottages which climbs Clitheroe Road towards the Nick of Pendle. The name “Step Row” is an appropriate one as the roofs of the houses are stepped to accommodate the incline. The central house on the row, now 113 Clitheroe Road, is double fronted, much bigger than the rest and in the early days of the village was occupied by John Bury, brother of James and son of James Senior. It’s believed that this house predates the rest of the terrace by some years and was originally a farm house. 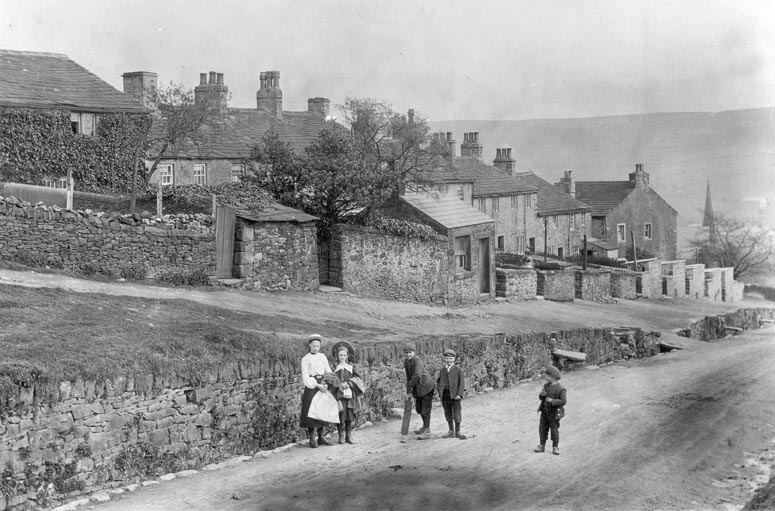 The photograph below looks up the hill from just below Bury Row. The house on the extreme right of this picture is a substantial property, formerly two dwellings, tagged on to the end of Bury Row. Up the hill after this house is the gateway leading to the site of the original Baptist Chapel and the graveyard. 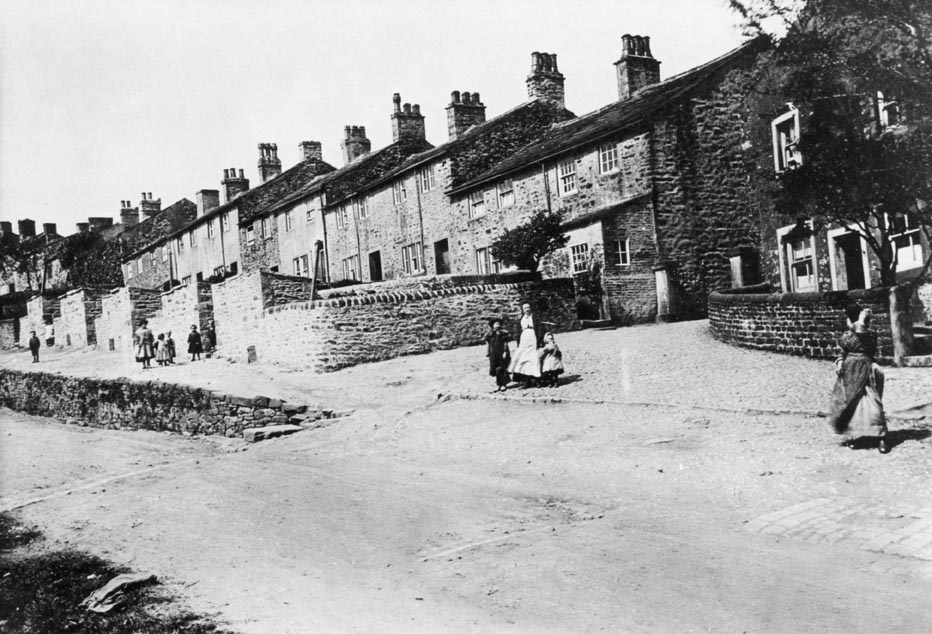 Both these photographs of Step Row and Bury Row, below, date from c1910. 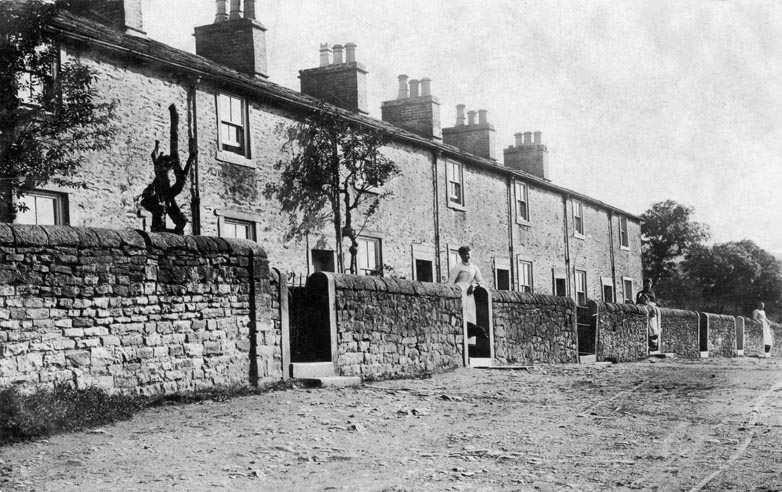 Bury Row, once Harry Bury Row, and probably named after Henry Bury of Baxenden, grandfather of James and John Bury, who died in 1796. But was the row built by the Burys? Possibly not, because there is some evidence to show the property in Grimshaw hands in the 1830s so perhaps they were responsible for the construction.

Not long after the printworks began, the Burys, acknowledging the need for a place of worship for themselves and their workforce, set about building one. Subscriptions were collected to build a Baptist Chapel on the hillside behind Step Row and the chapel opened for worship on 31st August 1797. 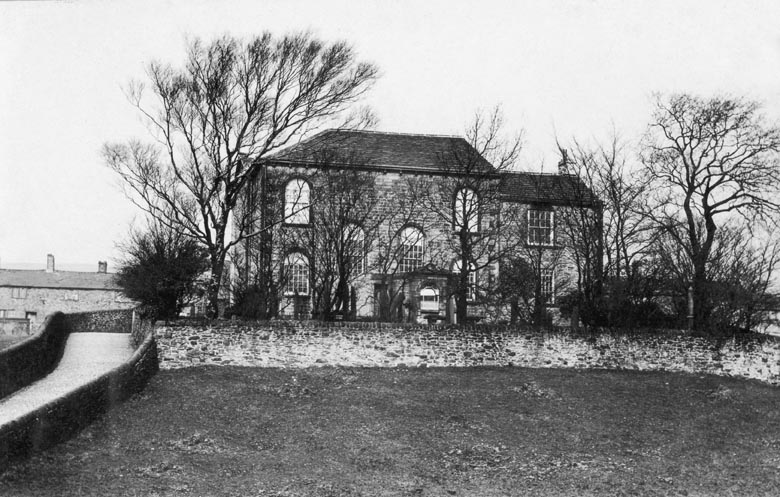 It wasn’t long before the Baptist Sunday School was formed where the working class children of the village would have learnt to read. The intention, according to the custom of the time, was primarily that they might be able to read the Bible; it’s unlikely in these early days that they were taught to write.

Some of the parents were not too keen to send their children but the inducement of a penny or two per child per Sunday made all the difference. During the 1830s, the government of the time were keen to upgrade already existing Sunday schools to day schools, granting substantial amounts of money, as a means of establishing a national system of education for all children. The Baptists declined such an offer, fearing consequent inspections and possible interference from government officials particularly in the area of religious education. Had they gone ahead the future of primary education in the village might have taken a very different course. 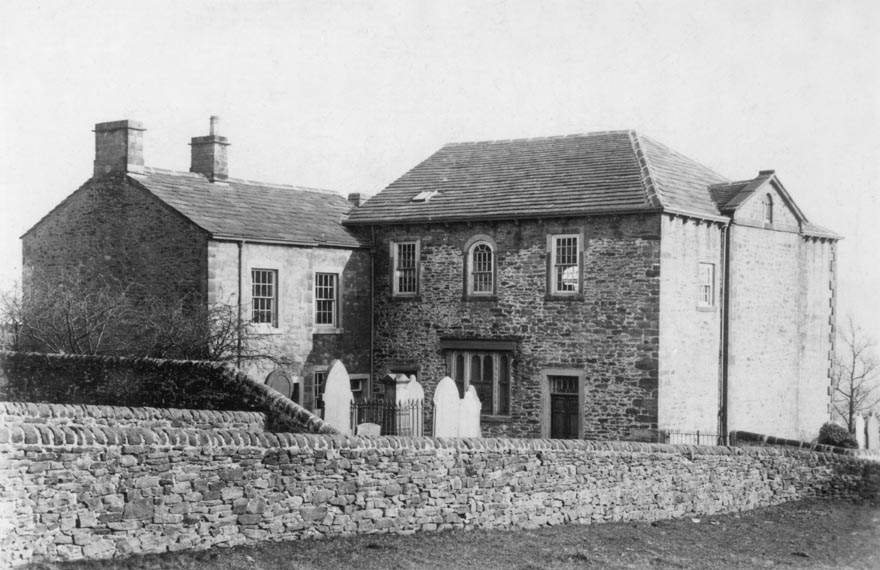 The chapel building was originally of a simple rectangular structure and the extension to the back, shown in the photograph right , was added in 1835 and used for schoolrooms for both the Sunday school and adult evening classes.

This early church was without a baptistry so adults, professing their faith were baptised in one of the lodges known to have existed and built for the print works at the foot of Churn Clough. In 1844, a baptistry was finally constructed within the chapel. The old Baptist chapel does not exist today but the graveyard is still there and buried within it are many of Sabden’s earliest inhabitants. 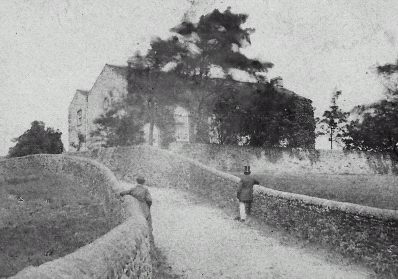