Quaker Immigrants to the Toronto Area from Yorkshire

Abraham and Sarah Grimshaw were born (in 1812 and 1811) and were married in Yorkshire (in 1834). After the first five children, the family emigrated to Gwillimbury, Ontario where they joined others who were adherents to the Quaker faith. They then had three more children. They lived out their lives in the area and are buried in the Religious Society of Friends Burial Ground, which is in Newmarket, York Regional Municipality, Ontario. Abraham died in 1867; the date of Sarah’s death is not known. Abraham Grimshaw is a descendant of the Edward and Dorothy (Raner) Grimshaw line.

One of Abraham and Sarah’s children, William Alfred Grimshaw, married Dora Tinley in Bradford in 1875, and the family settled in Detroit, Michigan. This family is the subject of a companion webpage.

It was previously hypothesized on this webpage that another Grimshaw family, that of GR and Ellen Grimshaw (see companion webpage on John Thomas and Arvilla Grimshaw), may have also descended from Abraham and Sarah Grimshaw. The families of both William Grimshaw and GR Grimshaw settled in the Detroit area and apparently were closely connected, as indicated by the commonality of names in the two families. However, the evidence is not strong enough to support the hypothesis.

The following descendant chart for Abraham and Sarah Grimshaw has been constructed from several sources, in particular the family trees found on Ancestry.com.

Abraham’s lineage to the early Yorkshire Grimshaw line has been identified as shown below.

Information on two of Abraham and Sarah’s daughters, Anna Eliza and Sarah Jane Grimshaw, has been found on the following publication and is shown below.

The following record of the marriage of Eliza A Grimshaw to George Williams on Octrober 9, 1858 was found on the internet. 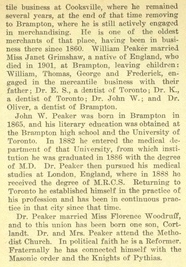 Another child of Abraham and Sarah, William Alfred Grimshaw, is described below and more completely on a companion webpage.

East Gwillimubury is just north of Toronto and not far northwest of Detroit, down the peninsula between Lakes Huron and Ontario. Maps are shown below. 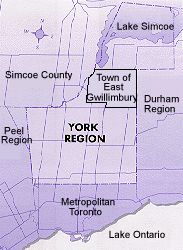 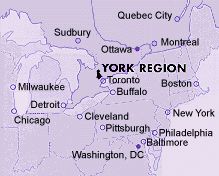 A brief description of East Gwillimbury was found on the internet and is shown below. Most of the Grimshaws from Yorkshire were Quakers.

History
The Town of East Gwillimbury was incorporated in 1850. Governor John Graves Simcoe named the area in honour of his wife, whose maiden name was Gwillim. In the late 1700’s, Governor Simcoe was looking for the best route north from York (now Toronto) to the British naval posts on Georgian Bay. To assist in his search for the best route, he commissioned the first survey of East Gwillimbury in 1800.

Many of the early settlers were United Empire Loyalists and Quakers who were attracted to the area by grants of land and the ability to practice their faith in peace. Hamlets sprung up throughout East Gwillimbury due, in part, for a need for shops, churches and schools. Development occurred in five areas – Holland Landing, River Drive Park, Sharon, Queensville and Mount Albert. Early settlement of these areas dates back to the late seventeen hundreds. The historical atmosphere of the Town is enhanced by the many attractive historic buildings still in use today.

Sharon
Sharon, originally known as Hope, was settled in the early 1800’s by United Empire Loyalists, many of them Quakers, enticed here by the 200 acre land grants. David Willson with his wife, Phebe, and two sons settled here in 1801. After breaking away from the Quaker Church, he established his own religious sect, The Children of Peace. They had a large congregation and developed a unique settlement with a large meeting house and Temple, schools, hotels, a post office, a general store, a cider mill and a grist mill. Many craftsmen – carpenters, wheelwrights, blacksmiths, tinsmiths, shoemakers, a seamstress and a telegraph operator – lived in the village.

Queensville
Among the various land routes to the shores of Lake Simcoe, Yonge Street and its back concessions were perhaps most often chosen by travellers in the early days. “Queen Street”, now Leslie Street, was one of these roads. It had also attracted a large group of Quakers who formed the community of Sharon and later prompted the settlement of another community to the north, originally known as Hackett’s Corners but renamed to Queensville in 1843. The establishment of a school and post office was followed by the addition of a bank, hotels, various churches, several shops as well as a flour and grist mill.

Mount Albert
As the first settlers were arriving at the oldest villages of East Gwillimbury, the only indication of human presence in the eastern section of the municipality was an Algonquin Indian trail which ran north-south over “the hill”. This area was originally settled by a small number of Quakers in 1821. It wasn’t long until more bush was cleared for settlement and the Indian trail was widened to form Centre Road. Growth was slow in the beginning, consisting of farms and a few homes but by the mid-1800’s the village consisted of several houses, grist, flour, woollen and lumber mills, a tannery, churches, schools, several shops and two hotels.

The following images and information on Abraham and Sarah Grimshaw’s final resting place were found on find-a-grave.com. 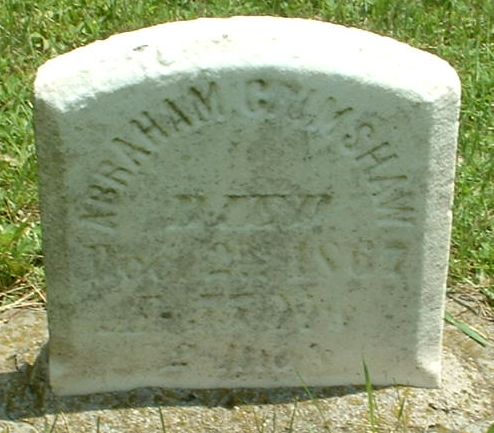