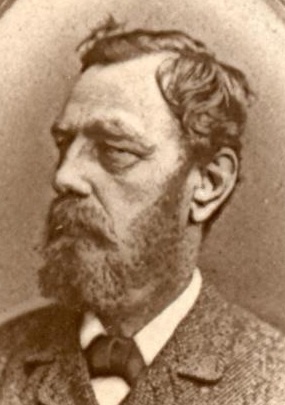 Wikipedia Articles on Grimshaw and His Famous Move

From Wikipedia, the free encyclopedia.

Walter Grimshaw was a 19th century composer of chess problems. In 1854 he won the first ever chess problem solving competition in London. He is perhaps best known for giving his name to the Grimshaw, a popular problem theme.

This is one of his problems, a mate in five (white moves first, and must checkmate black within five moves against any defence) first published in the Illustrated London News in 1850. The key (see chess problem terminology) is 1.Bc8 (see algebraic notation) which threatens 2.Qc5# or Qd2#. To defend, black plays 1…Bxc8 white plays 2.Qf6 (threatening 2…c4#) and now a Grimshaw interference comes into play: black can defend by cutting off the white queen from the defence of d6 with 2…Ne6 or 2…Be6, but this interferes with the rook’s guard of e5, and so allows 3.Qe5#. If instead black plays 2…Re6, this interferes with the bishop’s guard of f5 which is significant after 3.Qd4+ Kxd4 4.Nf5+, because the knight cannot be captured. Instead, there follows 4…Kd5 5.c4#.

This is one of Grimshaw’s better known problems, a mate in three composed for a compitition organised by the Chess Players Chronicle, 1852-54. The key is the paradoxical 1.Rf1, sacrificing a strong white piece. This carries the threats 2.Nf3 (leading to various mates delivered by the d5 rook) and 2.f3+ (leading to knight mates on f5 or g2). Black’s obvious defence, 1…exf1Q is answered by 2.Nf3 Kxf3 3.Rd2#. After 1…f3 (giving black a flight at f4), white plays his rook back to where it came from (a switchback) to take advantage of the newly opened fourth rank: 2.Rg1 any 3.Rg4# 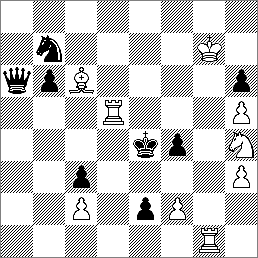 From Wikipedia, the free encyclopedia.

A Grimshaw is a device found in chess problems in which two black pieces arriving on a particular square mutually interfere with each other. It is named after the 19th century problem composer Walter Grimshaw.

The theme can be understood by reference to the following example by A. G. Corrias (published in Good Companion, 1917): 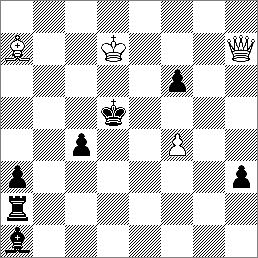 The problem is a mate in two (white must move first and checkmate black in two moves against any defence). The key (see chess problem terminology) is 1.Qb1 (see algebraic notation), which threatens 2.Qb7#. Black has three ways to defend against this. One is to play 1…c3, giving his king a new flight square at c4, but this unguards d3, allowing white to mate with 2.Qd3#. It is the other two black defences, however, which show the Grimshaw theme.

Black can play 1…Bb2, thus cutting off the white queen’s path to b7. However, the bishop on b2 interferes with the a2 rook and stops it moving along the rank – this allows white to play 2.Qh1# (after a different black move, this would not be possible because of 2…Rg2, blocking the check).

It is this mutual interference between two black pieces on the one square (in this case, a rook and a bishop on b2) which constitutes a Grimshaw.

The Grimshaw is one of the most common devices found in directmates. The pieces involved are usually rook and bishop, as in the above example, although Grimshaws involving pawns are also seen, as in this mate in two example by Frank Janet (published in the St.Louis Globe Democrat, 1916): 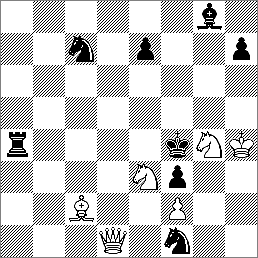 The key is 1.Qd7, threatening 2.Qf5#. As in the previous example, black can defend by cutting white’s queen off from its intended destination square, but two of these defences have fatal flaws in that the interfere with other pieces: 1…Be6 interferes with the pawn on e7, allowing 2.Qxc7# (2…e5 would be possible were the bishop not on e6) and 1…e6 interferes with the bishop, allowing 2.Qxa4# (2…Bc4 would be possible were the pawn not on e6). It is this mutual interference between bishop and pawn on e6 which constitutes the pawn Grimshaw (there are several other non-thmatic black defences in this problem – click the diagram for them all).

Sometimes, multiple Grimshaws can be combined in the one problem. Here are two examples by Lev Ilych Loshinsky each with three Grimshaws:

This was first published in L’Italia Scacchistica, 1930. It is a mate in two. The key is 1.Rb1, with the threat 2.d4#. Each of black’s defences produces a Grimshaw interference which stops him from capturing white’s mating piece. Black’s defences, with white’s replies, are:

There is one other black defence: 1…Rd6 leading to the simple recapture 2.Bxd6# (this is essentially the same mate as that which follows 1…Be6).

This second Loshinsky example, also a mate in two, is from Tijdschrift v.d. Nederlandse Schaakbond, 1930, and is one of the most famous of all chess problems. It is a complete block (if white could pass his first move, then he could reply to every black move with a mate), and white’s key, 1.Bb3, holds this block, making no threat, but putting black in zugzwang. Black has six defences leading to three Grimshaws, one of them a pawn Grimshaw:

After other black moves, white can play one of the above moves to mate; the three exceptions are 1…f5, taking away that square from the king and allowed 2.Qd6# and two recaptures: 1…Rxc7 2.Nxc7# and 1…Bxd4 2.Nxd4#.

A close relative of the Grimshaw is the Novotny, which is essentially a Grimshaw brought about by a white sacrifice on a square where it can be captured by two different black pieces – whichever black piece captures the white piece, it interferes with the other. 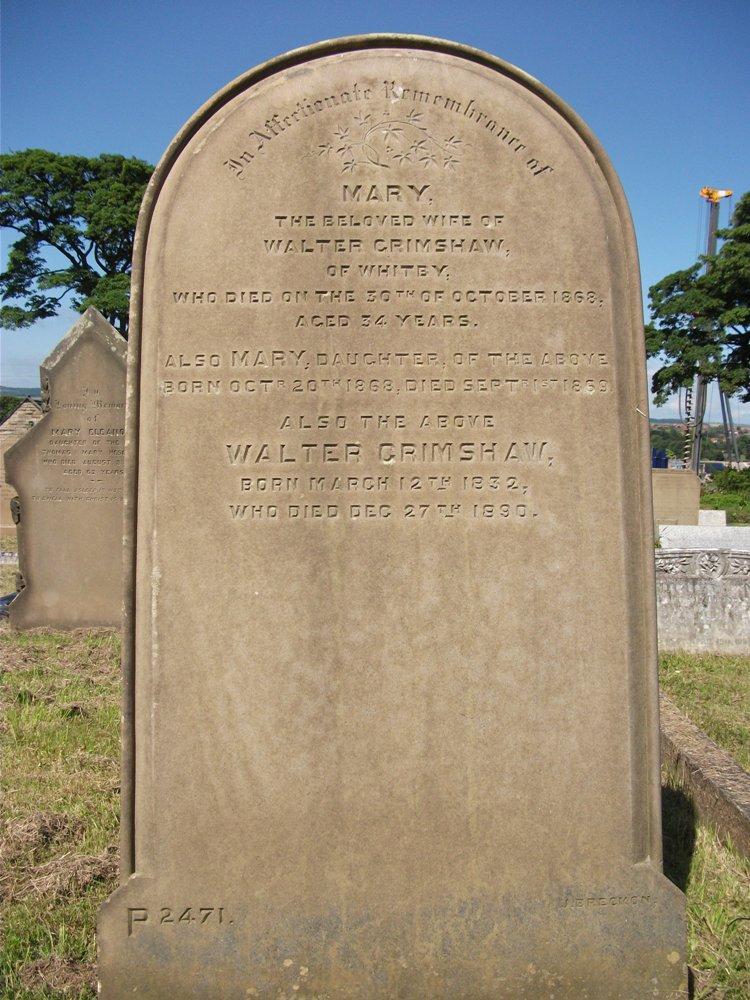 Webpage posted January 2005. Updated May 2012 with addition of photos and gravestone picture